The name orientalis is based on a hybrid population in north-central Iran and is not usable. (3)

„Kreishornschafe“ from Tierpark Berlin are labelled as „Afghan Red Sheep“ and „Ovis ammon cycloceros“ (2018/03) , but they are actually treated as Arkal (Wolfgang Dreier/Tierpark Berlin, pers. comm.) Subsequently the labelling has let to confusion. For example Castelló (2016) has used images of these „Tierpark Arkals“ to illustrate his Afghan Urial on page 388. Hence his Afghan Urials and Transcaspian Urials are not distinguishable. 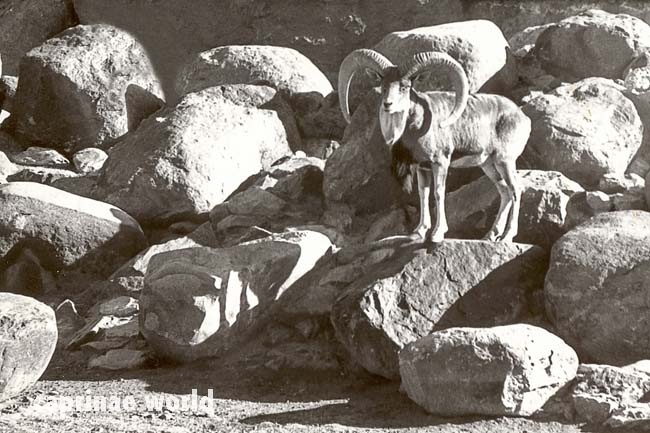 The Afghan Urial occurs (or occurred?) in central areas of Afghanistan, two areas in Eastern Iran and Western Pakistan. 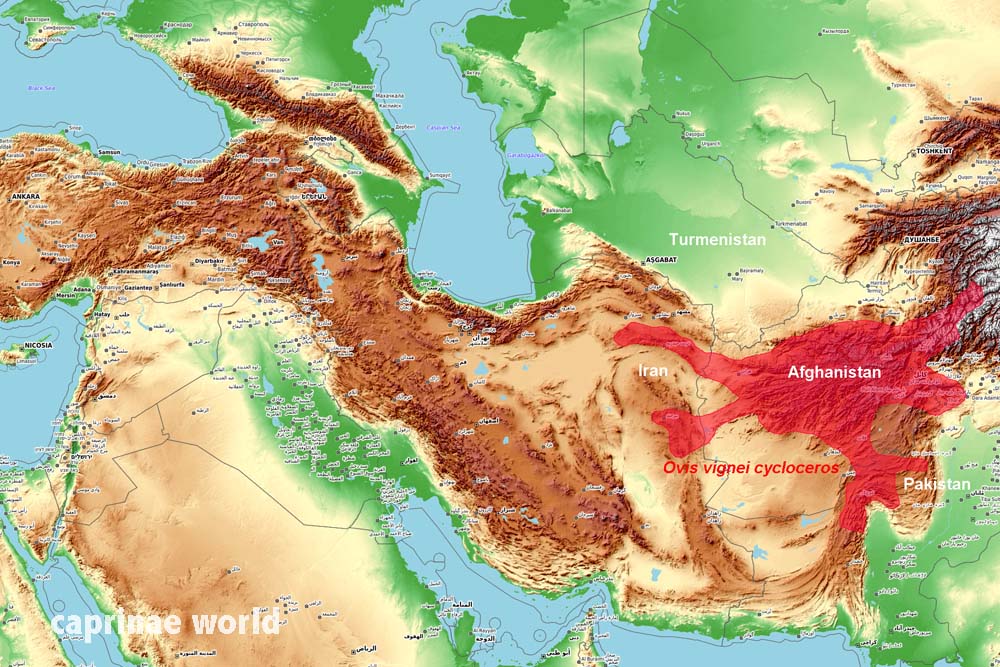 Afghanistan: Current data is not available, but Damm and Franco (2014) hold the opinion that Afghan Urial occurs in most central provinces from west to east. (1) Sources from 1977 state that it occurs in the Arjar Valley Wildlife Reserve in Afghanistan (Shank et al., 1977), and seasonally (summer) in Kohe Burocinal and Kohe Argosa nearby the Band-e Amir National Park (Shank and Larsson, 1977). (7) Most populations in Afghanistan have probably been extirpated. (3)

The Afghan Urial range may have come into contact with the Transcaspian Urial and Bukharan Urial in the North and Northeast, and the Baluchi Urial in the South. The present more contracted distribution ranges of all four phenotypes are almost certainly seperated. All Afghan Urial populations throughout the entire range are fragmented and scattered across suitable habitat. (1)

Heptner et al (1966) consider sheep from the Kopet-Dag, the mountain range in the Northeast of Iran bordering Turkmenistan, as Afghan Urial too. (2)

For the Afghan Urial in the narrower sense there are not many measurements available. 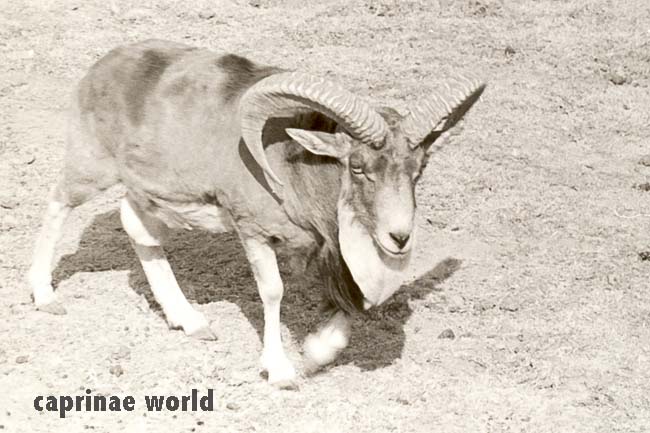 saddle patch in rams: generally very indistinct, or lacking (1), but rams with distinct black saddle patches have been observed (1, 6). 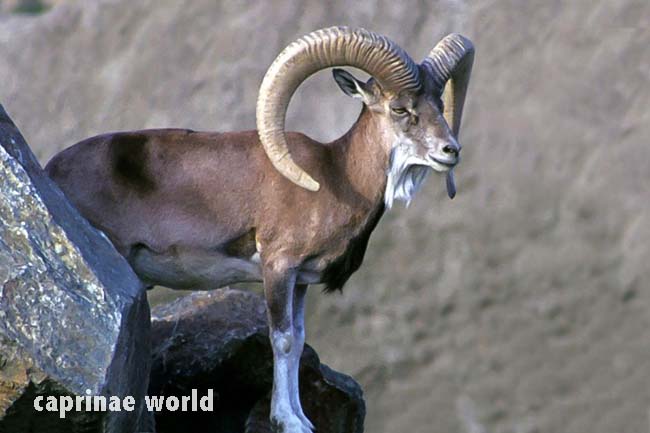 face: bluish-gray with lighter markings around the eyes and above the muzzle (1)

neck: mature rams tend to have a luxuriant black neck ruff sprinkled with white hair and a white bib extending from the jaws to the chest. (1)

summer: hair is stiff and short (1); winter: coarser and less smooth, and of a darker shade of brown. The upper parts become interspersed with white in old individuals. (1)

Rams have horns which often develop more than a complete arc when viewed from the side. The tips usually bend slightly outwards. The horn growth is normally homonymous (1, 4), but heteronymous horn types are also found in the same populations. The horns are triangular in shape and strongly corrugated. (1)

horn length: over 100 cm in extraordinary specimens. The longest horns  are 105,4 cm (1, 6) – the longest of all urial subspecies have been recorded from heads originating from the old Waziristan province of British India (now part of Pakistan’s Federally Administered Tribal Areas. (1)

Between May 2008 and October 2009, Shank and Alavi (2010) saw 55 urial throughout the Baminyan Plateau, Central Afghanistan, at elevations over 3000 m. (Band-e-Amir National Park, Afghanistan’s first officially designated protected area, lies on the southern boundary of the plateau.) Apparently some of the areas are used as summering, others as wintering grounds. Local informants reported that in April or May, urial move into the core lambing and summer range in the central part of the plateau with the key areas being Sugholugh, the Syahkawhal drainage and the Dare-e-Zirk/Kul-e-kawhal area. (1)

parturition: April to May in Central Afghanistan (1) 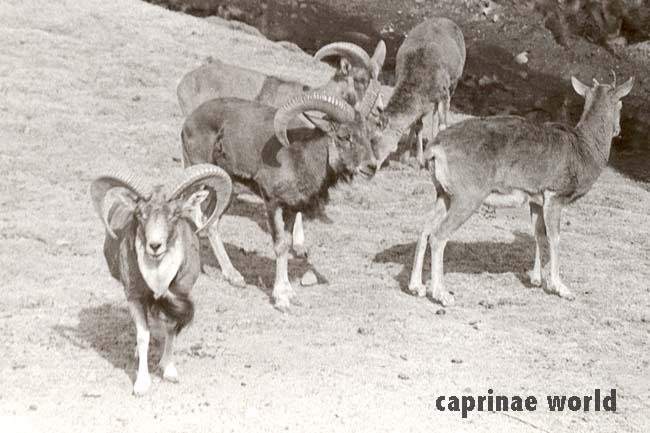 Populations in all countries have greatly declined. Protected areas rarely have populations exceeding 500. (3)

Pakistan: The following data, provided by the IUCN, dates back to 2008 and is most probably outdated: A total population census based on surveys is not available. In the past, Roberts (1985) estimated that perhaps 2,500 to 3,000 Afghan urial lived in Baluchistan, with 1,000 (0.2/km²) inhabiting the Torghar hills of Toba Kakar range (District Zhob) according to Mitchell (1988). About 150 animals inhabit the Takatu hills near Quetta (A. Ahmad, unpubl. Data), and the situation in the Dureji hills (District Zhob) may be a little better (Virk, 1991). Malik (1987) estimated a total of 310 to 340 Afghan urial for the whole of NWFP, whereas the NWFP Forest Department (NWFP 1992) reported a more recent total of only 80 urial (68 from Kohat, two from Mardan and 10 from Abbottabad), suggesting a severe decline over five years. For Sind Province, a census carried out by Mirza and Asghar (1980) estimated a population of 430 urial for Kirthar NP. Based on a census in the Mari-Lusar-Manghtar range and in the Karchat mountains in 1987, K. Bollmann (unpubl. data) estimated between 800 and 1,000 urial (0.26-0.32/km²) for the whole of Kirthar NP. About 150 to 200 animals live in the Mari-Lusar-Manghtar range, and 100 to 150 in the Karchat mountains; i.e. 1.7 to 2.5 urial/km² (Edge and Olson-Edge, 1987). The overall density within the subspecies’ distribution is probably much lower than this. (7)

Their greatest threats are competition with livestock and illegal hunting. (3)

Afghanistan: On 20 March 2005, Afghan President Hamid Karzai issued Presidential Decree No. 53 banning hunting in any form. (1) In Afghanistan, urials are placed on the country’s first Protected Species List in 2009, prohibiting all hunting and trading of this species within the country. (7) But the ban is almost universally ignored. (1) Most populations in Afghanistan have probably been extirpated. (3)

However, since the increasingly effective enforcement of the Law on Firearms, Ammunitions and Explosives, people have become wary of openly carying firearms. Accordingly, urial populations are considered to have increased in the past several years. However, hunting and trapping of urial continues mostly by a few individuals who attain local prestige as hunters, and by powerful government officals (Shank and Alavi 2010).

In Iran, the remoteness of some areas where Afghan Urial most likely occur have so far prevented a reliable survey. (1) Caprinae species (urial and wild goat) are the only game mammals in Iran that can be hunted under licences issued by the Department of the Environment. The hunting season for Caprinae lasts four months beginning each year in September, but each licence is valid only for five days from its date of issue. Each hunter can obtain up to four licences per hunting season, and may shoot three males and one female. Unfortunately the exact numbers of Caprinae shot each year by hunters are not available. According to recent data, between 2,200 and 3,200 licences were issued each hunting season, and a rough estimate of the number Caprinae legally shot each year would be between 2,000 to 3,000 animals. However, more than twice this number are estimated to be killed by poachers annually. Hunting is permitted in protected areas but requires a special licence. Because Caprinae populations are not harvestable in most areas, licences are almost never issued for protected areas. (7)

The Torghar Conservation Project (TCP) is critically important for the conservation of Afghan Urial in Pakistan. The goal of this sustainable hunting project is to bring benefits to the local people to prevent them from poaching. Initially, TCP established a game guard program at Torghar in 1986 with the involvement of the local communities. Over the years the Torghar project has emerged as an exemplarily successful model of biodiversity conservation through sustainable use. A complete ban on unauthorized hunting has been enforced. Controlled hunting of trophy animals was seen as a critical component of the plan for two basic reasons: first, to generate the revenue necessary to support the game guard program; second, to convice the game guards and other local people that their economic well-being was directly tied to the abundance of urial (and markhor), motivating them to give full protection to both species. (1)

Systematic trophy hunts by foreign hunters (mainly from Europe) have taken place every year from 1986 onwards. The proceeds were used to hire more game guards and provide developmental assistance to the local community and tribesmen as a reward for their conservation efforts. Older animals were carefuly selcted for hunting so that the herds‘ breeding performance was not affected. The Society for Torghar Environmental Protection (STEP), an officially registered nongovernmental organization under Pakistani law, receives an annual hunting quota of five Afghan Urial.

Surveys between 1994 and 2005 at Torghar show that the estimated urial populations have increased from 1.173 to 3.146 (Shafique 2006). The developmental schemes which were funded with the proceeds of trophy hunting benefited the entire community. The people of Torghar recognized that conservation, when practiced correctly, brings pride and economic benefits to the entire community and results in bright ecological prospects. (1)