Of the four subspecies of Siberian Ibex recognised by Fedosenko and Blank (2001) the Altai Ibex is the most northerly occurring.

German: Altaischer sibirischer Steinbock [2] – it seems appropriate to derive from English and name it Altai Steinbock

In other languages it seems not common to combine the species name with the region (Altai).

Numerous subspecies have been described for the Asiatic Ibex, resulting in a confusing array of names. There is a need for a taxonomic revision of this species. Four subspecies are tentatively recognised. [5] The Altai Ibex is one of them.

Other putative scientific names and synonyms

Generally speaking this subspecies inhabits the Altai Mountains in Russia and Mongolia [4] and regions northeast of the Altai, almost ranging as far east as Lake Baikal [3].

On the side of the Russian Federation, the Altai Ibex occurs along the border with Kazakhstan, Mongolia and China in the Russian Altai Range, the Tannu Ola Range further northeast, and still further east in the Eastern and Western Sayan Ranges. The easternmost tip of the distribution range reaches Southern Buryatia [1, 4], located west of the southern tip of Lake Baikal.

In Mongolia – according to Damm and Franco (2014) –  C. s. sibirica occurs in the High Altai Mountains (Uvs, Bayan-Ölgiy and Hovd aimags), the Khangai Mountains (questionable! – see below), the Khuvsgul Mountains (Khuvsgul aimag), and probably also in the Bulgan and Selenge aimags. [1]

Unfortunately the Khangai or Changai Mountains are mentioned in the text part, but they are not incorporated in the associated map. Instead the distribution map for the the Gobi Ibex on page 279 includes the Khangai Mountains. Furthermore the same authors seem not to comprise the „Gobi Altai“ as part of the Altai Mountains as such. Accordingly ibexes from the Gobi Altai are not considered „Altai Ibex“, but „Gobi Ibex“. Consequently subspecies and areas are mixed up in the public.

Not confirmed by IUCN (2020 assessment) are quoted occurrences of Altai Ibex by Damm and Franco (2014):  in the Kuznetzk Alatau, probably in the southern part. Kuznetzk Alatau is the northern continuation of the Abakan Range in Krasnoryask Krai and Irkutsk Oblast.

The mountains west and north of Dood Tsagaan Lake, Mongolia, close to the Russian border are surrounded by Altai Ibex distribution range beyond the border. It seems obvious that ibex should also occur on the Mongolian side.

Separation from other subspecies

According to Damm and Franco (2014) the Altai Ibex is separated from the Gobi Ibex (C. s. hagenbecki) by a depression north of the Chinese oasis town of Hami / Kumul. Their distribution map for the Altai Ibex shows an intergrading zone of Altai and Gobi Ibex south of Hovd / Chowd. To place this area there, seems to be rather arbitrary. According to biogeographical insights the mixing zone should be in an area of reduced interchange, hence the depression north of Hami.

The Altai Ibex is reported to be smaller in general than other more southern subspecies [1, 2] – with less longer heads, shorter nasals and shorter horns. [2] The pelage of the Altai Ibex is highly variable. Across the range, there are pelage colour variations between individual populations. [1]

Generally one may say males in winter are „relatively light“ [1] to „very light“ [2]. Winter pelage colour is either „dirty yellowish white“, „light dirty white with a rufous tinge“ or „umber-brown“.  (Lydekker, 1913)

Saddle patch: Damm and Franco (2014) mention that „usually there is a large purer white saddle patch“. [1] Confusingly their „mature Altai ibex“ on page 273 (photo taken on 12th November) shows an animal with a dark-brown saddle. Tsalkin (1950) mentions a dirty or creamy-white saddle patch.

Neck patch: Noteworthy is also a „light-coloured field on top of the neck“ (Tsalkin, 1950 in Damm and Franco, 2014). As shown in photos presented by Damm and Franco (2014, page 274 and 276) these bright neck patches can be the lightest areas on the upper body. It would be worthwhile to investigate if the individuals within a male herd with the most pronounced neck patches are the most mature ones.

Damm and Franco (2014) further state (probably quoting Lydekker, 1913) that „old males become nearly white“. And: „The similarity of winter colouration of adult Altai and Sayan males with the Bezoar Goat is striking.“ Photos to underline these findings are unfortunately not available.

In summer the animals are  uniformly brown [1, 2] – greyish brown or café-au-lait (Lydekker, 1913), grey brown or cinnamon brown to brown (Heptner and Naumov, 1966) or yellowish or greyish brown (Damm and Franco, 2014). A saddle patch is absent during the summer. [1] 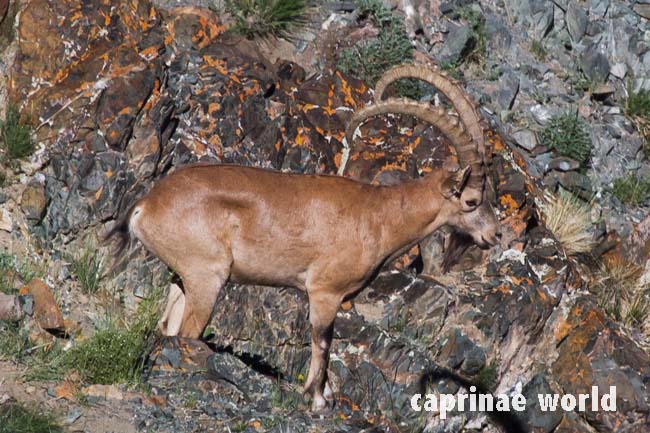 Mature male Altai Ibex in summer in Jargalant Hayrhan (mountain) near the city of Chowd, Mongolia. Note that the pelage colour of this specimen is best of all matching the description of Heptner and Naumov (1966): cinnamon brown. A dark dorsal stripe is also visible. Photo: Otgonbayar Baatargal

Rowland Ward’s record-class head from Mongolia (Shosh Khon) shows a length of 138,4 cm with a base circumference of 26,7 cm [1]

C. s. alaiana is said to be bigger, has longer sculls, nasals and horns. The winter pelage is supposed to be dark cinnamon brown to brown. A light saddle patch is sometimes non-existent at all. [2]

In comparison with Asiatic Ibex from the Himalayas or the Tian Shan, the Altai Ibex has on average somewhat shorter horns with a lesser girth. [1]

Altai Ibex may be hunted in Mongolia and Russia, and both countries offer organised hunts. In Russia however, large numbers are shot illegally. In Mongolia, illegal and unsustainable hunting remains a threat (Wingard and Zahler, 2006). China put a moratorium on all hunting in 2006 and, despite recommendations by Gao et al. (2011) that the Forestry Departement of Xinjiang take measures to ensure the rational use of Capra sibirica, hunting is closed. [1]

Trophy hunting can be important for conserving species, as it can provide incentives to prevent poaching, but usually only if implemented as community-based programs. Most such operations in the former Soviet Union involve former poachers and the income they provide encourages these people to refrain from poaching and to prevent others from poaching (Michel and Rosen 2016). [4]