This large and dark subspecies is an endemite of Romania.

While some authors [1, 3, 12] see the Carpathian Chamois as a subspecies of the Alpine Chamois (Rupicapra rupicapra), others like Groves and Grubb (2011) „have no doubt that Rupicapra carpatica is a thoroughly distinct species.“ [4]

Despite the „distinctiveness“ of this subspecies‘ dark pelage colour, the darkness has to be seen as a statistical value. Dark winter coats occur also in other subspecies like the Alpine or Tatra Chamois, but it can probably be presumed that the proportion of darker individuals is higher in the Carpathian Chamois.

The main populations occur in the southern Carpathians and in the mountain massifs of Bucegi, Piatri Craiului, Fagaras, Lotru, Paring and Retezat. [1]

Re-introductions into Caliman and Ciucas Mountains were not as successful, although a few Chamois are still found there. [1] 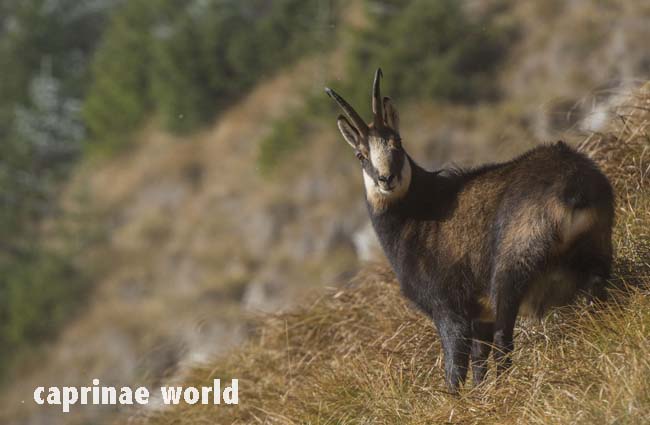 In general the Carpathian Chamois is characterized by a larger body, longer horns and darker winter coat than other Chamois taxa. [16] 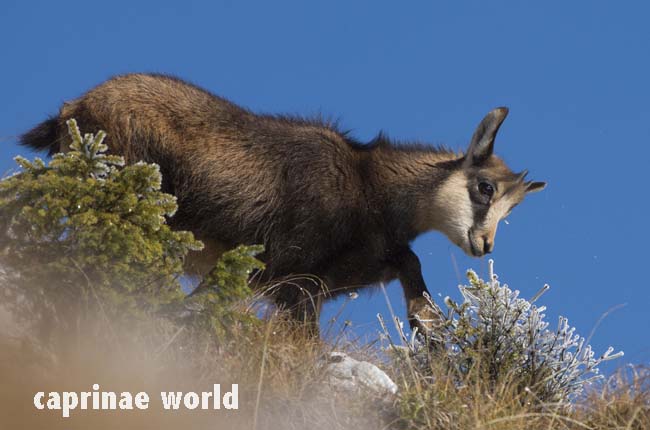 The pelage is normally darker than found in the Alpine form in both summer and winter. The pelage colour of Chamois from the Southern Carpathians (Transsylvanian Alps) is even darker – as seen in many Carpathian specimens (Lydekker 1913). [3]

Hunters consider the horns of the Carpathian Chamois „the best hunting trophies of al Chamois“. In all essential horn dimensions, a difference between the sexes has been established (Hrabe et al. 1986). [3]

Damm and Franco (2014) evaluated the only partially complete records of 82 Carpathian Chamois (not representative, but a „mere selection of excellent heads“): CIC points (mean; n=82): 119,0 [3]

There are 98 specimens listed with SCI:

The largest Carpathian Chamois head recorded – which at the same time is the largest Chamois trophy ever officially recorded until the present – comes from the Făgăraş-Sibiu area in Romania and was harvested in 1931. The individual measurements of this extraordinary trophy are [3]:

CIC points: 141,1 (which includes an addition of 1,75 points for beauty and no deductions).

The Carpathian Chamois occupies alpine habitat in summer and lower areas of grasslands and forests in winter. [16] 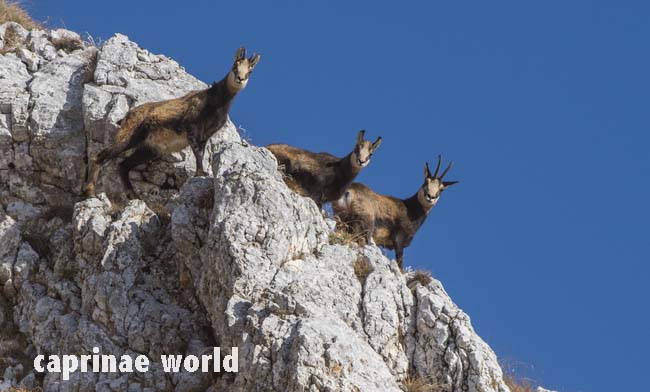 Wolves (Canis lupus) and Eurasian Lynx (Lynx lynx) are the major mammalian predators. Domestic dogs can also be significant predators. [16] Natural mortality accounts for 3 to 7 per cent of the annual losses. Males which lose condition during the intense mating period are especially susceptible to the harsh environment. [3]

Similar to Alpine Chamois. In the warm season, they graze early in the morning and seek shade during the warmest hours of the day. They resume grazing in late afternoon when day temperatures cool down. [16]

Probably similar to Alpine Chamois. Seasonal migrations occur between lower-elevation forests in winter and subalpine grasslands in spring. Detailed studies of home ranges and social organisation have not been conducted. [16]

In 1990, the total population was estimated to be around 9.000 animals (Shackleton 1997). At that time I. Coroui confirmed that the population was increasing. [1]

Major concerns are small, fragmented populations that could be extirpated, disturbance by shepherds and dogs, and competition with domestic livestock. [16]

Grazing by domestic sheep in summer tends to disturb Chamois causing them to be more dispersed. In some areas, high densities of these domestic animals, create intense grazing pressure. [1]

In some areas, poaching is a major concern. Current monitoring protocols do not accurately estimate populations. [16]

Carpathian Chamois occur in nine main protected areas in Romania, but many are small. It is also found in many, even smaller areas, which afford them some level of protection. [1]

Several successful introductions and re-introductions of Carpathian Chamois have been made, especially in the southern and eastern Carpathian Mountains. The subspecies is out of danger and surviving well. [12]

Conservation measures proposed: The number of protected areas should be increased and the existing ones enlarged; habitat improvement projects should be initiated and game laws strictly enforced. Reestablishment of populations in areas where they had been extirpated should be continued and populations established in newly created protected areas. [16] Determine hunting quotas based on more scientific biological management, with attempts to adjust harvests such that local carrying capacities and population reproductive rates are accounted for. If Chamois hunting is continued only under special licence, no other conservation measures will be required. [1]

Some more general information on conservation in Romania: Protected areas legislation was first introduced in 1930, and was soon followed by the establishment of two nature reserves and a national park. These and others subsequent conservation laws have been since superseded by the Environmental Law passed in 1973. [1]

There are two categories of protected areas in Romania, National Parks (Parcul National) and Nature Reserves (Rezervatii Naturale), although within nature reserves there are further subdivisions. These include Game Reserves and Special Hunting Territories. All are administered by the Commission for Natural Monuments within the Romanian Academy of Science. [1]

Forest protection is provided to by the 1954 and 1962 Forest Codes, and a national forest protection and development program was initiated in 1976. Approximately 14 per cent of forest cover is fully protected, especially those on steep slopes, and there is an additional approximately 36 per cent classed as „protective forests (IUCN 1992a).

Carpathian Chamois are listed as a game species in Romania. Data concerning the hunting season differ. On the one hand it is said to be between September 1st and October 30 th each year. [1] Others state September 15th to December 15th. [3]

According to the Romanian National Forest Administration (Regia Naţională a Pădurilor, Romsilva), an estimate of Carpathian Chamois populations is conducted annually. The annual harvest quotas are established on the basis of this count. [3] However it has been remarked that monitoring protocols do not accurately estimate populations. [16]

The authorized hunting quota on average ranges at around 350 Chamois. For the 2010 hunting season a harvest of 345 Chamois was authorized. The actual annual harvest is apparently much lower, averaging 180 Chamois during the hunting season. [3]

As of 2008 hunting under special licence is permitted in nature parks, but not in the scientific reserves of the national parks. [1]

Some tourism and hiking access is permitted in the national parks. In most nature reserves tourist access is allowed only under special permit (IUCN 1992a). [1] As of 2019-05 very few contributors to mammalwatching.com and flickr.com have documented  Carpathian Chamois in Romania. Vladimir Dinets reports Chamois from the Zarnesti Gorge (Prăpăstiile Zărneştilor) in Piatra Craiuli National Park: https://www.mammalwatching.com/wp-content/uploads/2016/09/Dinets_Balkans_2016.pdf