The Indochinese Serow is a stealthy forest dweller, somehow lacking the attractiveness of its neighbours the Chinese Serow with its heavy, silvery mane or the Sumatran Serow to the south which can emerge with a jet-black pellage.

Other (putative) scientific names and synonyms (1)

In Cambodia the species is probably naturally restricted to the hill and mountainous terrain that surround the Mekong and Tonle Sap (lake) central plains, although confirmation of presence comes from relatively few areas, primarily as a result of survey bias (R. Timmins pers. comm. 2008). There are no population estimates for Cambodia. (2)

In Lao PDR the historic distribution of the Indochinese Serow almost certainly included the vast majority of the countries land area, the majority of which is hilly to mountainous (e.g. Deuve, 1972; Lekagul and McNeely, 1988; R. Timmins pers. comm. 2008). Currently in Lao PDR the species is still widespread despite heavy hunting due to extensive tracts of habitat, often over rugged terrain, especially along the Annamite mountain range of eastern central and southern Lao PDR (W. Duckworth and R. Steinmetz pers. comm. 2006; R. Timmins pers. comm. 2008). (2)

In Myanmar the general distribution appears to follow the forested mountain ranges surrounding the central plains. Its distribution in the northwest is believed to stretch through the Chin Hills from the border with India, probably as far south as 20ºN in the Arakan Yoma range. A larger distribution area occurs in the mountains in the north (Kachin state) and in the mountains east of about 96ºW, to Myanmar’s borders with China, Lao PDR and Thailand. This species may or may not be sympatric with Capricornis rubidus in Myanmar (Than Zaw and W. Duckworth pers. comm. 2006). (2)

In Thailand the Indochinese Serow was originally widely distributed, its range is now highly fragmented. The species is primarily confined to the mountainous areas of the north and west, with isolated populations, in hill areas in the east and southeast. In limestone areas it is restricted to steep, forested hills and cliffs, in areas relatively inaccessible to human encroachment. The dividing line between the ranges of the Indochinese Serow and the Sumatran Serow is suspected to fall somewhere in the Chooporn or Suratchathani Provinces on the Thai peninsula (2) or the Kra Isthmus (3). In the Koh Lak peaks, Kloss said, that the Indochinese Serow lives in association with animals in which the lower legs are almost entirely black. This suggests that there may be either hybridization or, less likely, sympatry with the Sumatran Serow. (4)

In Viet Nam the species was at least historically likely to have been widespread, except perhaps for the far southern Mekong Delta region, although this is not well documented, probably due to a historical bias towards surveys in the north (R. Timmins pers. comm. 2008). Populations in the northern highlands are likely to be heavily depleted in number and fragmented, but are likely somewhat more numerous and contiguous along the Annamite (Truong Son) mountains of central and southern Viet Nam. Confirmed records, especially well documented ones, from the southern portions of this range are very few (Gia Lai and Kontum Provinces (Do Tuoc, 1990), Lam Dong Province (Pham Mong Giao, 1990) but this is likely primarily a reflection of the paucity of fieldwork, rather than the actual status of serow. The species has also been recorded from offshore islands of the north, e.g. Cat Ba (Ha Dinh Due et al., 1989; Le Hien Hao, 1973). (2)

pelage: black or dark brown (4), brownish (1), but it appears gray or brindled because of white hair bases (4). The coat is supposed to be thicker and wollier compared to the Chinese Serow (1). 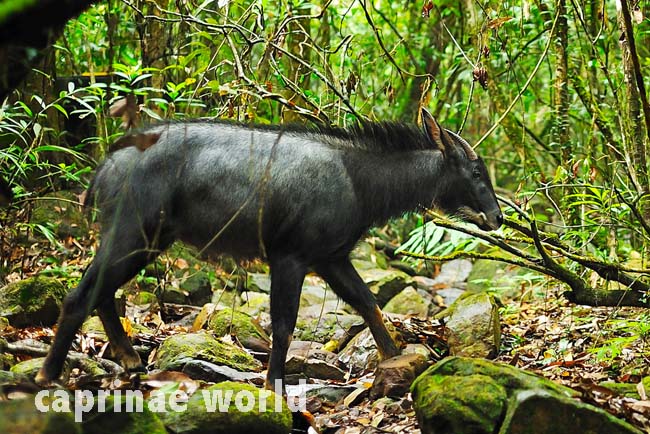 Indochinese Serow. Note the black pelage appearing gray because of the white hair bases. Mane in the lower part is typically mixed black-and-white. The darker head is rather unusual. Photo taken at Khao Yai National Park, Thailand by Tontan-Travel, www.tontantravel.com 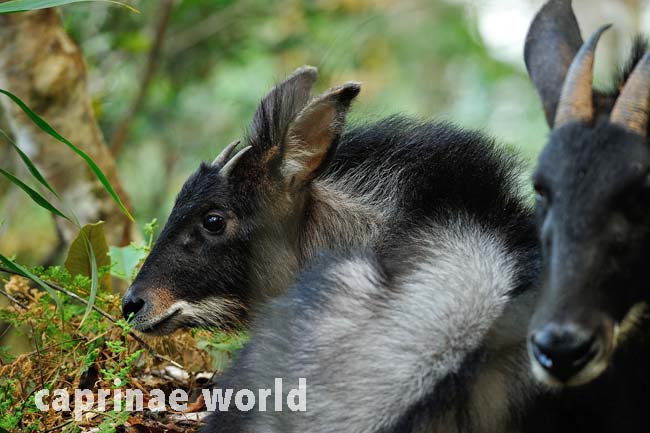 Hard to believe, but the coat in Indochinese Serow is supposed to be thicker and wollier compared to the Chinese Serow. In this Juvenile from Khao Yai National Park, Thailand, this seems to apply. Note also the rust-coloured spot on the muzzle, which has previously not been described for this species. Photo: Tontan-Travel, www.tontantravel.com

dorsal stripe: dark mid-dorsal stripe (3), usually thin, but sometimes thick (4); median stripe of allblack hairs extends down the back to the basal half of the tail. (1) 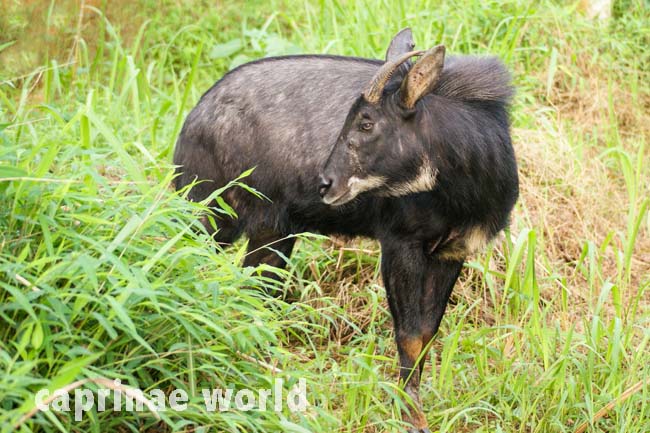 Indochinese Serow with a dark mid-dorsal stripe and black, short mane (compared to Chinese Serow). Note also the white mustache mark and throat patch. The white breast spot, has previously not been described for this species. Photo taken at Cuc Phuong, Vietnam by Wolfgang Dreier

mane: short, with blackish and brownish hairs (1), often predominantly white because of mixed black and white or pale yellow-buff hairs. (3) (In the Chinese Serow the mane is heavier. (1))

tail: 11-16 cm (3); the tail is supposed to be bushier compared to the Chinese Serow (1).legs: The upper half of the legs are jet black and the lower half are reddish tan or creamy, with a sharp division inbetween; sometimes a white or red patch on the carpus, and a black mark or mingling or line on the lower shanks. (4) The red of the legs is not as obvious as in the Chinese Serow. 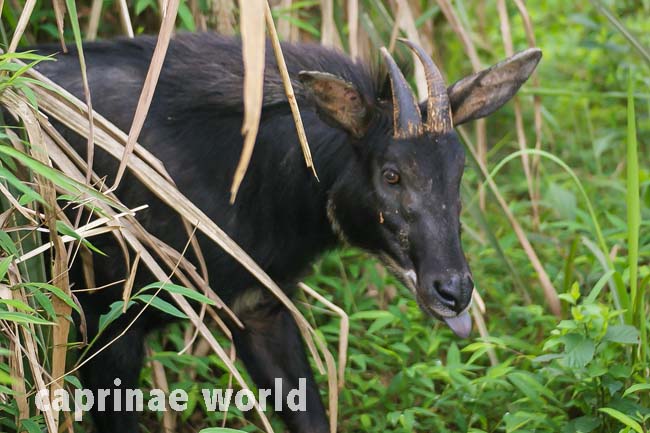 Portrait of a male Indochinese Serow. The large ears are typical. Insides of ears are tawny. They can be also whitish in this species. Photo taken at Cuc Phuong, Vietnam, by Wolfgang Dreier

horns are flattended transversely at the base and laterally in the distal half, converging slightly at the tips. Only one head has ever been registered as a hunting trophy. This was taken in 1927 (Indochina) with the longer horn measuring 15,9 cm and with a circumference of 11,4 cm and a tip-to-tip spread of 8,3 cm. (1)

The Indochinese Serow occurs in rugged limestone mountains and cliffs. In Vietnam, it is usually found above 1500 m in steep montane scrub, evergreen hill forests, and grassland slopes. But the species also occurs in lowland forest (3) and on small offshore islands and has been reported swimming between them (Duckworth and Walston 1998). In Cambodia it appears to occupy small, naturally isolated karst limestone outcrops in the level lowlands of the Mekong plains (R. Timmins pers. comm. 2008). (2) 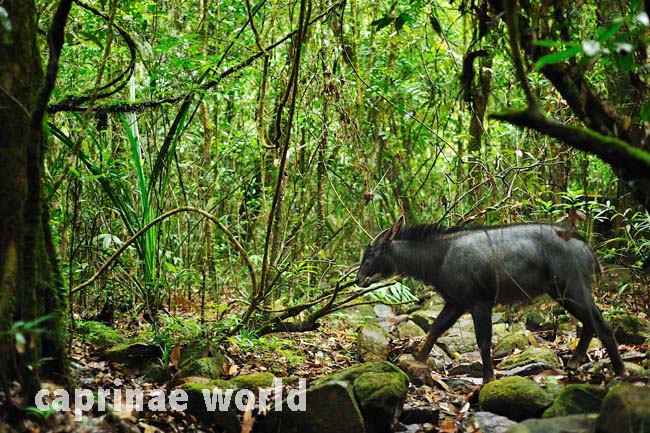 It is likely to tolerate moderately degraded habitat well, due to its presence in natural karst scrubland, though it is unlikely to be present in heavily disturbed areas such as agricultural land (W. Duckworth pers. comm. 2006), and has been documented amidst secondary forests and swidden in at least one landscape mosaics of such habitats and ‘primary’ forest (W. G. Robichaud in litt. to R. Timmins pers. comm. 2008). The species also appears to persist well in small habitat isolates, both naturally (i.e. Cambodia; R. J. Timmins pers. comm. 2008) and due to habitat loss (i.e. Thailand; Lekagul and McNeely 1988). (2)

no specific information available, but in general, serows are browsers that consume shoots, leaves, and perhaps some gras on occasion (3)

no information available, but serows are usually crepuscular, with most activity at dawn and dusk (3)

no information available, other serows are found to live alone or in small groups (3)

IUCN incorporates the Indochinese Serow within the chapter for the Chinese Serow. As such it is listed as „Near Threatened“ on the IUCN Red List. (2)

The Indochinese Serow is extensively hunted for meat, bones, and live specimens and is relegated to small, fragmented populations. (3)

In Cambodia the main threats to serow are posed by hunting, and to a lesser degree habitat loss, but the species is relatively safe in this country compared to other range states.

In Lao PDR, serow horns, frontal bones, leg bones and other body parts are used in local, traditional medicine and are readily available in shops in Vientiane and elsewhere. The meat is also eaten in rural areas; however, the extent to which hunting affects the population status of this species in Lao PDR is unknown.

In Viet Nam, serow is frequently hunted for meat and for sale as live individuals in many local markets, while its bones and other body parts are valued for medicinal purposes (TRAFFIC, 1993). (2)

It occurs in many protected areas. Generally it has not been targeted for protection from hunting (or other conservation actions), accept for Myanmar and Thailand, where legislation has successfully reduced hunting. (2)

In Cambodia legislation (State Council No. 35 KR.C, Law Decree on Forestry) governs the use and management of forests and wildlife, and stipulates penalties for contravention. However, this legislation is only interim and is generally unenforceable. It is also only very general in scope and does not specifically include serow. Protection of serow lies within the Forestry Department of the Ministry of Agriculture, and more specifically with the newly-created Wildlife Protection Office. Serow was known to occur only in Phnom Kravanh protected area, but this is located in a region which saw military conflict between 1980 and 1982, and possibly more recently.

Conservation measures proposed for Cambodia: 1) Determine the serow’s distribution and status in Mondulkiri Province. The Forestry Department planned to begin these censuses as soon as it became safe and feasible. International support will be required to fund both the census studies and the development of the subsequent conservation plans. 2) The Cambodian Government should create a broad conservation strategy, including a network of protected areas and supporting infrastructure to protect all the country’s natural resources. The species likely occurs widely in the Cardamom range of the southwest, which is now well covered by national protected areas, and conservation management in several of these areas is already ongoing and starting to effectively control hunting (R. Timmins pers. comm. 2008). The species also likely occurs in several other areas of the country covered by protected areas, namely Rattanakiri province in Virachey NP and Mondulkiri Province (R. Timmins pers. comm. 2008). Given Cambodia’s exceptional concentration of highly threatened species, conservation of serow should not be considered a high priority nationally, and with effective conservation management of suitable protected areas, the species should be safe without the need for species specific conservation activities (R. Timmins pers. comm. 2008). (2)

In Viet Nam serow is included in Appendix II of the Endangered and Rare Species List of the country. However, it is not included in the list of 38 species covered by Declaration No. 276 of the Ministry of Forestry (2 June 1989) and Decision No. 18 HDBT of the Council of Ministers (17 January 1992) so serow can be hunted or captured. The species has been recorded from many protected areas and likely occurs in many others with extensive tracts of suitable habitat, the most significant populations remaining are likely to be found in the extensive tracts of habitat covered by protected areas in the Annamite (Truong Son) mountain chain, especially the extensive limestone formations of the central region and limestone formations in the north (R. Timmins pers. comm. 2008). Effective management of suitable protected areas, especially controlling hunting, should be sufficient to conserve the species nationally, however, the majority of areas are still fall well below this level of management, although there is cause for optimism within a few (R. Timmins pers. comm. 2008). (2)

In Myanmar, serow occur in Kahilu (an area of armed civil unrest, which suffers from poaching) and Kelatha Hill Game Sanctuaries, and in Shwesettaw and Shwe-U-Daung Wildlife Sanctuaries. It also probably occurs in Tamanthi, Pidaung, and Mulayit Wildlife Sanctuaries. Serow is also reported in a number of proposed National Parks: Alaungdaw Kathapa, Kyaukpandaung, Natma Taung and Pegu Yomas. Serow was eliminated from Taunggyi Wildlife Sanctuary, probably as the result of poaching and hunting by domestic dogs (IUCN, 1992b; WCMC, 1987).

Conservation measures proposed for Thailand: Determine the serow’s status to assess the effects that logging and poaching are having on its distribution and numbers. (2)