The Pyrenean Chamois is the nominotypical taxon of the Southern Chamois. It is smaller than the Apennine Chamois.

Apart from its distinctive pelage, the Pyrenean Chamois (R. pyrenaica) differs from the Alpine species (R. rupicapra) in its smaller size, the consistent absence of an ethmoid vacuity, the greater angle of the horn cores to the frontals, the presence of a conflict posture, and distinctive courtship patterns. And it is not adapted to the cold environments of the Alpine Chamois (Masini & Lovari, 1988). [4]

Regarding the pelage the Pyrenean Chamois is darker with less white than the Apennine Chamois. [1]

The Pyrenean Chamois is found in the Pyrenean mountains, along the border of France and Spain, including Andorra. [6] 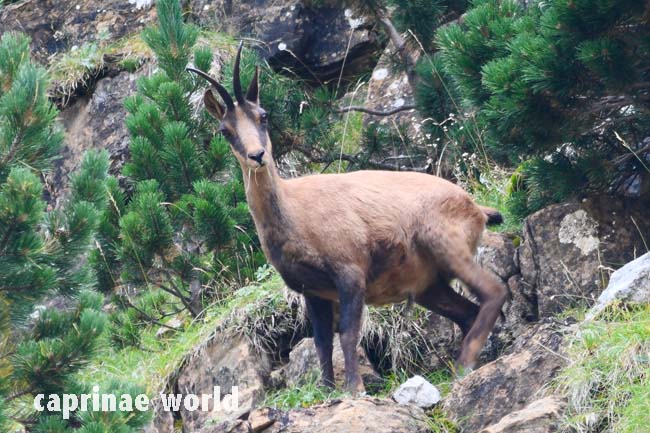 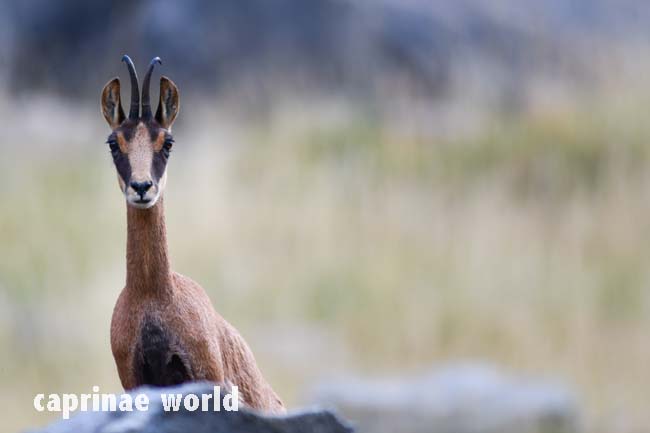 paler parts in winter coat: top of head, throat, shoulders, back of lower neck and rump [16] Lighter back of neck and throat patch are separated along the side of the neck by darker pelage extending from the base of the ear downwards, widening toward the brisket. [2]

head: a dark face stripe extends from the base of the horns to the eyes and muzzle [16]; the lighter parts of the facial mask are more whitish during the winter, and more yellowish during summer (This applies also to throat and neck patches.) [2] 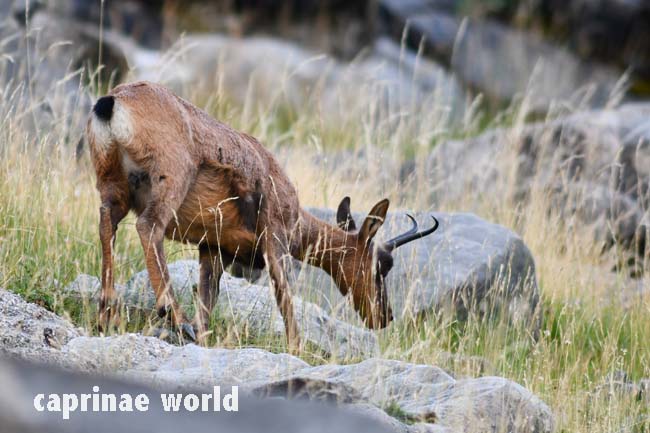 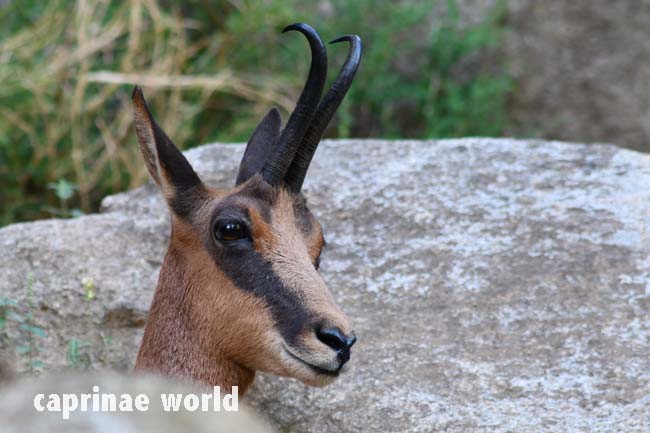 The species (Rupicapra pyrenaica) is found in alpine meadows, rocky areas, and the forested valleys and lower slopes in mountainous regions. It generally stays above 1.800 metres in alpine meadows during the warmer months of the year (Nowak, 1983). [6] 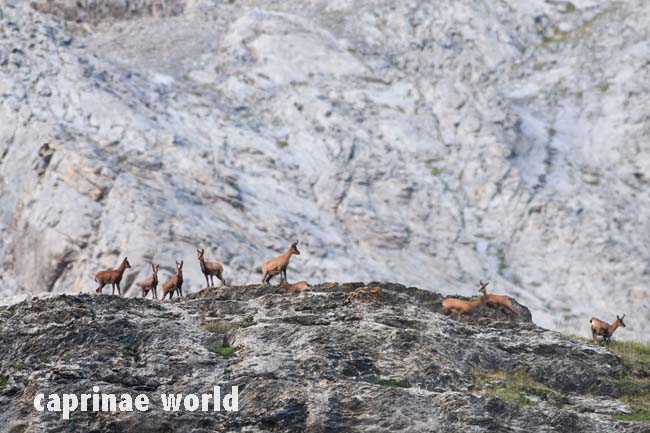 The animals make altitudinal migrations from the forests in the valleys to the more open alpine meadows (Pedrotti and Lovari 1999). In late fall and winter they have been known to enter lands below 1.100 meters, while usually staying on steep slopes, and rarely if ever occur in forested areas (Nowak, 1983). In recent years some populations have started to permanently inhabit forest (Mitchell-Jones et al. 1999; Herrero pers. comm. 2006). [6] 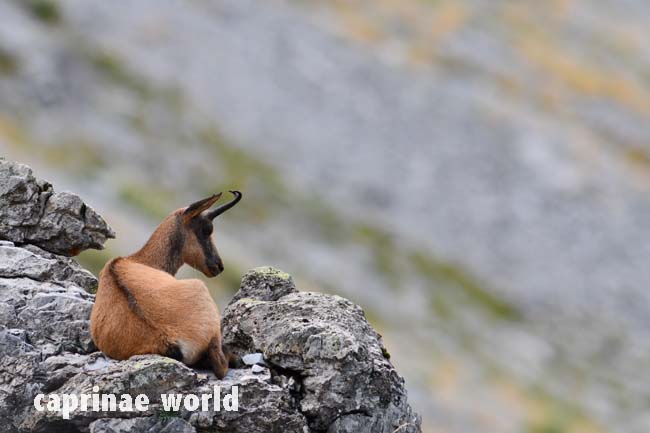 The Pyrenean Chamois occurs at elevations of 1000-2800 metres on or near steep rocky terrain in alpine and subalpine zones, principally ecotones between forested habitats and montane meadows. In summer, they usually seek the highest meadows to avoid domestic livestock and seem to prefer open habitats where availability of forbs and graminoids (grasses) is greater. In one study site, chamois entered forested areas to spend the night. They descend to forested habitats in winter. Groups preferred elevations of 2100-2300 metres in June and of 1700-2100 metres in November, avoiding elevations higher than 2300 metres. Mean group size in forested habitats was 2,27 and 5,88 in open habitats. In the south-western Pyrenees in Spain, chamois occurred principally in mountain pine forests and clearcuts and rarely in beech (Fagus sylvatica) and fir (Abies alba) forests. In summer, upper pastures were occupied by livestock. [16]

Predators are Golden Eagles (Aquila chrysaetos) and occasionally Red Foxes (Vulpes vulpes), but mortality due to predation is not significant because of scarcity of large carnivores. Major mortalities can occur due to infections of keratonconjunctivitis and other pathogens. [6] 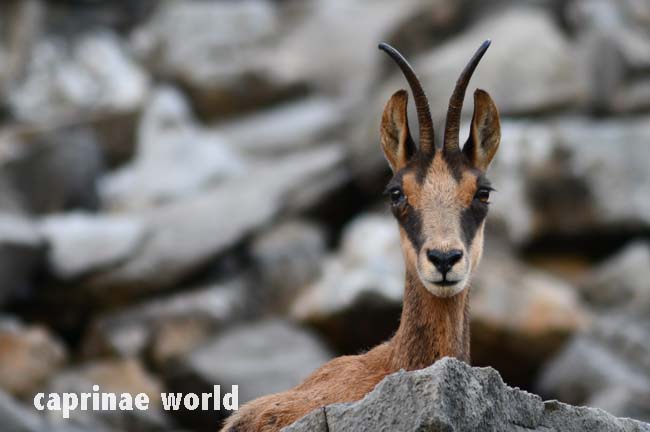 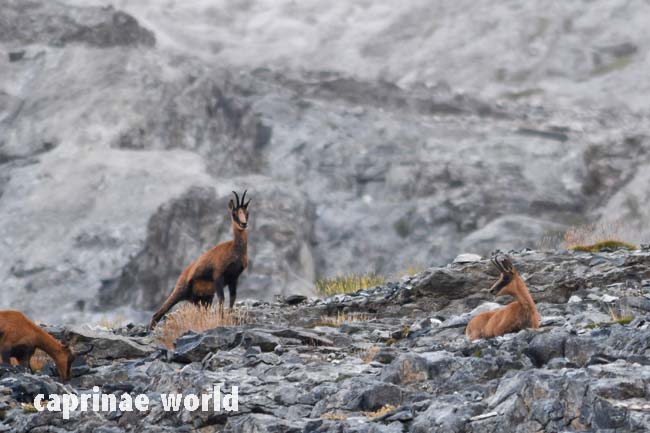 4-11 years old: 96 % reproduced in any one year (prime age of reproduction of females)

young per birth: twinning has not been recorded [16] 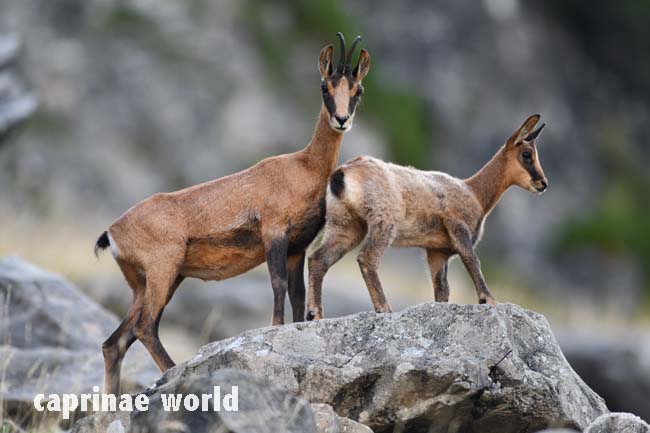 The Pyrenean Chamois is usually diurnal and most active during mornings and afternoons during summer. In a study area where they occurred with domestic sheep, herds of female chamois with kids primarily foraged in the morning and evening and rested at midday. Domestic sheep foraged mainly during the afternoon and at lower elevations than chamois. Sheep and chamois herds grazed at a mean distance of 250 metres, usually resulting in spatial and temporal separation of the two species. [16]

Seasonal movements of Pyrenean Chamois occur from lower-elevation forests in winter to higher in summer, sometimes exceeding 7 kilometres and with an elevation displacement of 600 metres. Some populations are sedentary. [16]

In a dense chamois population (14 ind / km²) in the Western Pyrenees in France, over one-half were in groups of 25 and one-third were in groups of more than 50, with a maximum number observed in a single group of 208.

Densities can exceed 25 ind. / km². Groups of 20 or more individuals were more common than smaller groups in November at elevations of greater than 2100 metres. [16]

There is a high rate of interchange of individuals between herds.

Males were seldom alone. In June, the majority of males were found in unisexual groups with a mean size of five. [16]

Summer kid-female ratios can be as high as 72 kids:100 females. During the parturition in the south-western Pyrenees in Spain, females were concentrated at elevations of 1600-2000 metres. None were found below 1500 metres or above 2000 metres. During the mating period, most were located below 1800 metres. [16] 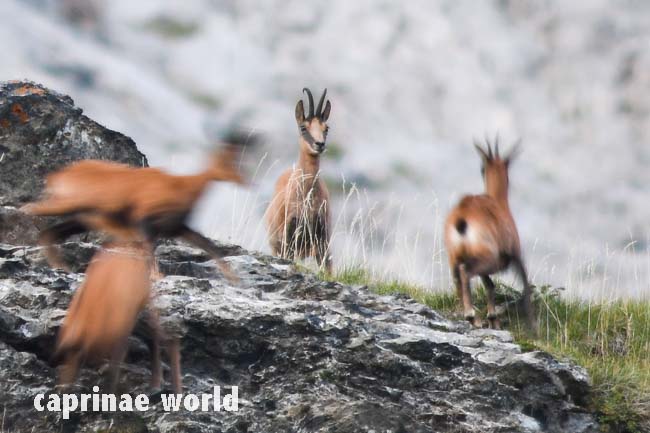 Overall, the status of this species has greatly improved since 1990. The population and range of the Pyrenean subspecies pyrenaica increased markedly from 1989 to 2003, although there have subsequently been some declines. The 1989 estimate for the total number of R. p. pyrenaica was around 15.500 animals (Shackleton 1997), but by 2003 there were estimated to be at least 53.000 (Herrero et al. 2004). [6]

France: Office national de la chasse et de la faune sauvage (ONCFS, 2008) and Berducou (2006) estimate the population in the French Pyrenees to be at least 23.800, with about four fifths of this total concentrated in the Haute-Pyrénées, Pyrénées-Orientales and Ariège. [2]

Spain: The Spanish population figures are somewhat ambiguous. By 2006, many Pyrenean Chamois populations had experienced local declines (in parts up to and over 40 per cent) following severe mortality caused by the pestvirus outbreak in 2004 (Marco et al. 2009). Pérez et al. (2002) came to a population count of about 25.000 animals: Herrero, Lovari and Berducou (2008) estimated the population in Spain at more than 19.000 individuals. [2]

In 2006 it was assumed that the total number could be an overestimate of the population, as many chamois populations have locally declined after the 2004-viral-disease, and French hunting bags have reduced although hunting effort has remained steady (C. Novoa pers. comm. 2006). Densities of R. p. pyrenaica tend to be lower outside protected areas. [6]

In France and Spain disease is currently the most important threat, like keratoconjunctivitis [6] and Sarcoptic mange [2]. Pestivirus appeared in the Pyrenean subspecies in 2004. [6]

While space and food competition with livestock seem to be the main limiting factors for the Italian subspecies ornata, the opposite has been stated fore the Pyrenees. There the presence of livestock is considered to benefit the chamois, via maintenance of young and good quality forage, which increases the carrying capacity (J. Berducou pers. comm. 2006). [6]

In France, there is a hunting plan that is designed to correct geographic imbalances in numbers and distribution, but it might be difficult to achieve. A major restoration effort was carried out in the French Pyrenees between 1981 and 2000, involving the translocation of more than 600 individuals (Herrero et al. 2004, C. Novoa and C. Berducou pers. comm. 2006). [6]

In Andorra there are a few small reserves with hunting quotas. [6]

Most Pyrenean populations are hunted (not within National Parks). [6]

Spain: Chamois is a major game species in Spain and is important socially and economically as a source of rural livelihoods. Hunting is carefully managed and revenue from hunting is returned to the local community. In Spain, regional governments set quotas, and hunting is not at an unsustainable level (J. Herrero pers. comm. 2006). [6]

In Navarra, hunting is not permitted (as of 2014), due to low population numbers. The subspecies there is classified as „vulnerable“. In Aragón, it falls under the hunting law and a management plan is required. In Cataluña, it is a game species subject to obligatory hunting management plans. The regional governments set quotas and seasons for the national hunting reserves and also for private landowners. [2]

In Andorra, it is also huntable game, although the subspecies is classified „endangered“. [2]

The annual harvest in Spain (including Andorra) amounts to about 700 to 800 chamois. The Anuario De Estadística Forestal (2006) shows Pyrenean Chamois harvest numbers of 226 of Girona and 537 for Huesca provinces, wheras the Estadísticas Agrarias (AE) 2006/07 shows only a total harvest of 429. It appears that the national statistical office depends on data delivery from the regions, which is not always received in time. Harvest figures from Lerida, for example, where the best trophy heads are obtained, are missing. If one assumes a harvest of 700 to 800, this represents between 2,5 and 3,7 per cent of the estimated population figures. Probably the annual harvest exceeds 1.000 chamois, a harvest quota of qpproicatey 3,6 to 5,3 per cent. [2]

France: In France, hunting is essentially a recreational and non-profit leisure activity, and average annual quotas are under 10 per cent of censused populations. This is sustainable, with only a few local exceptions. [6]

Hunting is managed by the administration of six departments which have 51 chamois management units. The overall management of the Pyrenean Chamois populations is subject to complicated norms and regulations differing in practically every jurisdiction where these animals occur. Nevertheless, hunting is generally carefully managed. [2]

The annual harvest in France amounts to about 2.700 to 3.000 chamois of all age classes (2.865 individuals according to ONCFS/FNC/FDC statistics from 2004); about 10,6 to 12,6 per cent of the total estimated populations, depending on whether minimum or maximum estimates are used for the calculation. [2]

The Pyrenean Chamois certainly contributes to the nature experience in the national parks and other areas, where the subspecies is present. Some encounters have been mentioned in trip reports of wildlife watchers (mammalwatching.com).