The Red Goral is more an alpine species than other gorals. It generally occurs at higher elevations, it is small in size and has different eating habits. 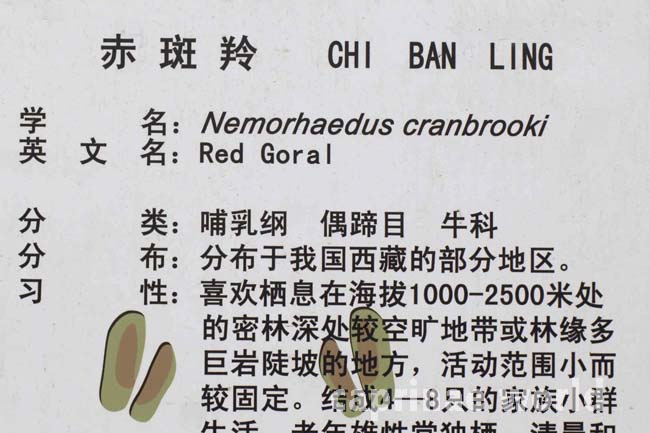 Information on Red Goral in Beijing Zoo. „N. baileyi“ and „N. cranbrooki“ were originally described as separate species and one may still find current references to N. cranbrooki as a valid species, although it is generally considered to be synonymous with N. baileyi.

overall body colour: reddish-brown to a rather bright fox-like red [3]; summer coat is a light rust with a tint of yellow. [7] The pelage is long, soft, and rather shaggy, with each hair pale brown at the base, tipped with red. [3] Differences in colour across various parts of the body are minimal. The colour of the winter coat is almost the same as the summer one, only the tone of the coat is slightly deeper. [7] 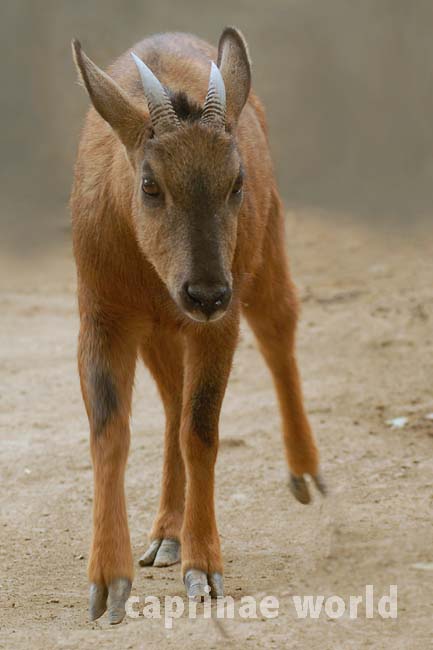 legs: short, coloured like the body [4]; dark patterns can be in place on and above the „knees“ (radiocarpal joints) of the front limbs; on the hind legs the plantar surfaces can be black to the level of the hocks. However the limbs are only rarely indicated and the black markings are regularly missing. [7] 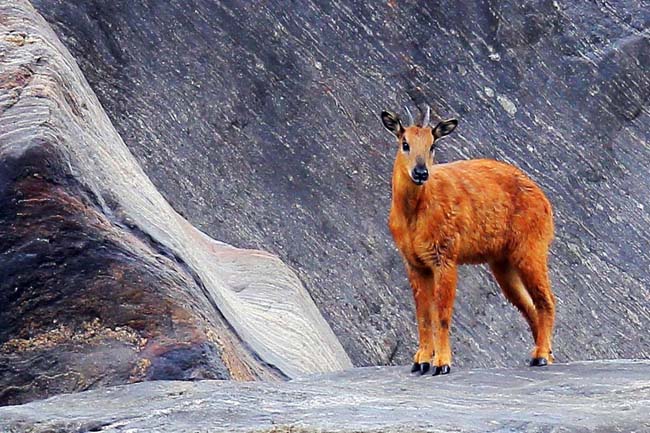 throat patch: very large, light rusty-yellow [7], rich chestnut [3] or a yellower version of the body colour [4]. In some individuals, however, it is hardly noticeable. Very rarely there can be a pure white throat patch. (7, 4)

chest: Some individuals have a black patch on their chest that may extend as a dark stripe onto the belly. [3]

nuchal and dorsal stripe: relatively narrow, sometimes a mere indication of the stripe and in some cases it may even be completely missing. Some animals have a nuchal stripe but no dorsal stripe. [7]

head: slightly more tawny coloured than the rest of the body. [3] Dark patterns in the face are very conspicuous, especially in males. Most prominent is an almost black coloured nasal stripe. More black areas are around eyes, chin and lips. [7] On the upper lip there are two white crescents with dark edges. Opposite these patches there is a narrow white rim on the lower lip. [7] Ears of the Red Goral are smaller than in other goral species, whitish on the inside and fawn on the backside. [3] 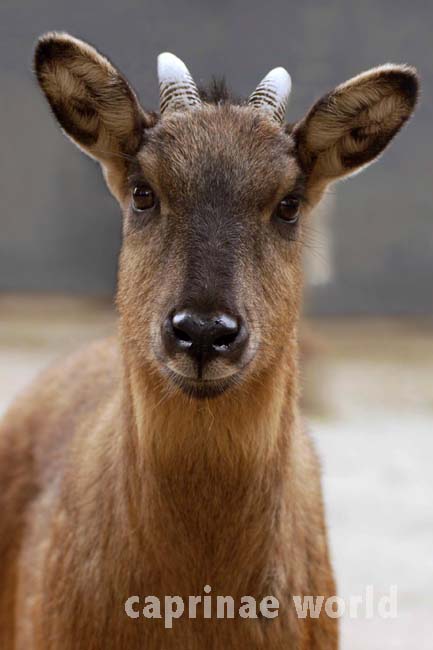 Portrait of a „Red Goral“ at Beijing Zoo. Note the white crescents on the upper lip and the large, yellowish, but hardly visible throat patch. (The „Red Goral“ depicted here is actually a hybrid – cross of Chinese Goral, male with Red Goral, female.) Photo: Ralf Bürglin

tail: short, the tuft occupying half the length [4]; usually it is the same colour as the body for half to two-thirds of its length, while a dark brown to black stripe runs along the medial plane. Its tip is always dark brown to black and it is often extended into a terminal tuft. [7] The tuft may double its apparent length. 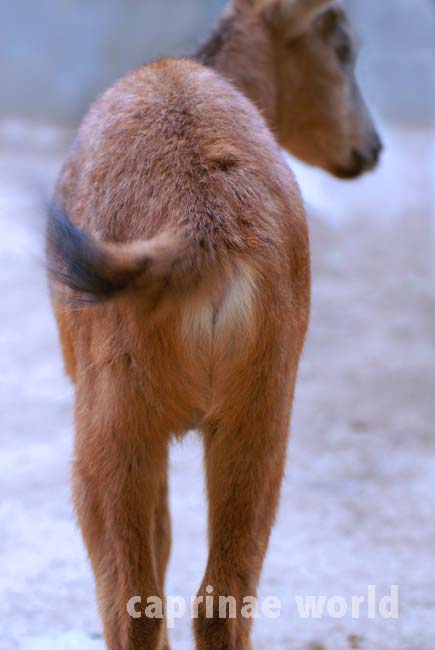 Rump view of a „Red Goral“ at Beijing Zoo. Note the upper half of the tail it is the same colour as the body , while the tip is black and extended into a terminal tuft. (The „Red Goral“ depicted here is actually a hybrid – cross of Chinese Goral, male with Red Goral, female.) Photo: Ralf Bürglin

The patterns are virtually identical to the adults. The only exception is a white patch on the crown of the head, which is very common in the young and for some individuals can cover practically the entire area between the ears. It is made up of elongated hairs and forms a conspicuous crest on the crown of the head. Curiously enough the young are born without this crest. [7] 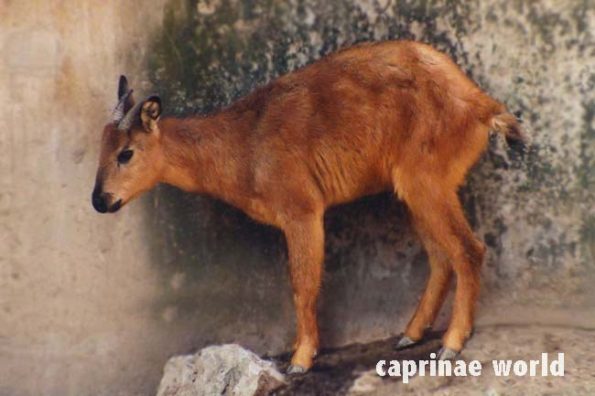 Horns of both sexes are rather small; they are black and curve backward to a greater degree than those of the Himalayan Brown Goral. [3] Horn lengths for both sexes typically fall within the range of 7,5 to 16 cm [1]; males show a range from 9-15 cm, females from 7,5-13 cm [3]. But the horns in males are rarely longer than 12 cm, females’ are mostly just 10 cm. [7] Males‘ horns also tend to be thicker, more curved and wider spaced. The basal cirmumferemce of the horns ranges between 4,3 and 9,4 cm. The horns bear transverse ridges along most of their length. [1] The horns of males are more clearly ribbed, mostly with 10 grooves. The number of grooves for females is not higher than 6. [7] The tips of the horns are smooth and sharp. [1] 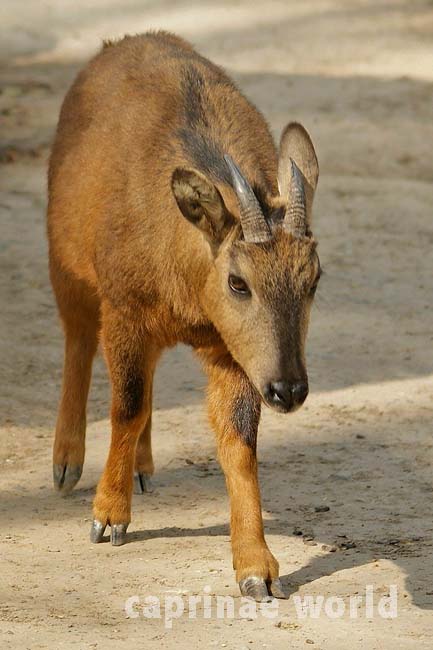 Male „Red Goral“ at Beijing Zoo. The horns of males are in general more clearly ribbed than in females, but can be scuffed through excessive rubbing. (The „Red Goral“ depicted here is actually a hybrid – cross of Chinese Goral, male with Red Goral, female.) Photo: Wolfgang Dreier

The Red Goral occurs at elevations of 2000-4500 m, generally higher than other goral species. Preferred habitats are steep, rocky coniferous woodland, scrub, and meadows, where rainfall is abundant, particularly in May-August. [3] The Red Goral inhabits the largest remaining primitive coniferous forests in the eastern Himalayas, in southeastern Xizang and southeastern Yunnan. [1] 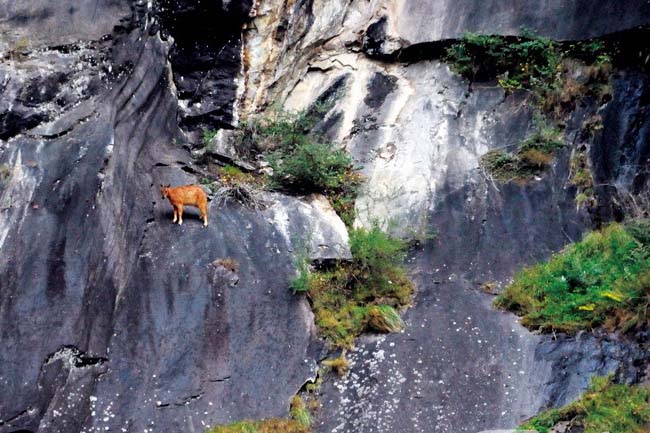 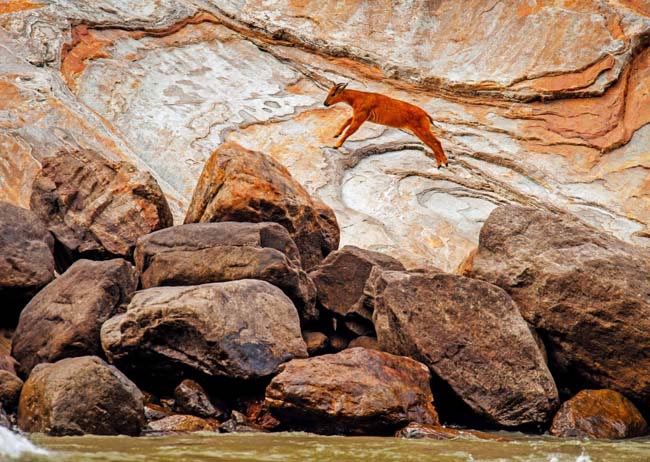 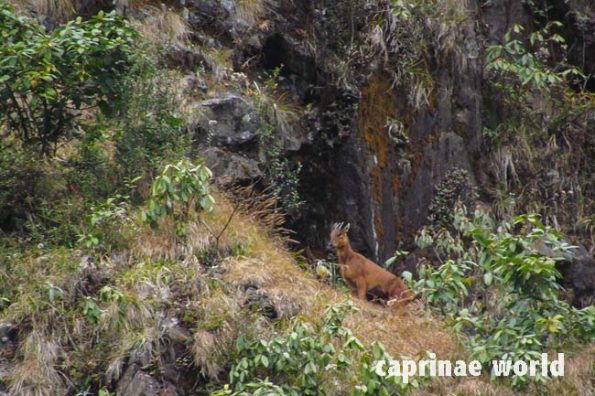 Although detailed studies are lacking, lichens, particularly species of Usnea (Old man’s Beard), are a main food source of the Red Goral. Grasses, herbaceous plants, and browse are also eaten. In captivity, they will drink daily. [3]

mating-season activity: males attract females with a „ze-ze-ze“ call. Females also use a loud whistling call when a male approaches, audible to humans up to 500 m. A mature male follows a female closely, frequently checking her genital area and displaying lip curls. If a female is not ready to breed, she will flee or head-butt the male. When she is ready to breed, she will stand still with her tail raised. they repeatedly copulate (10-20 times). [3]

The Red Goral is primarily diurnal [3] with most activity occuring in the early morning and evening [1]. Sunny slopes are sought out for foraging. [3] For the night they retreat to rocky cliffs, where they bed down on sheltered ledges. Red Goral are very agile and move fast and easily through rough terrain. [1] They are supposedly rather tame. [6]

In summer, Red Gorals move up in elevation, often above timberline to alpine meadows and thickets. From November through March, they move down slope to avoid snow, returning to higher elevations in April. Home ranges of the Red Goral are small, about 40 ha. Mature males are primarily solitary. Females live in small groups of 2-3 composed of her offspring of the current year and a male, or just her offspring from the current and /or the previous year. [3]

The Red Goral is classified as vulnerable on the IUCN Red List. [2] The total number of Red Goral is estimated at 10.000, but that number is probably high. In Xizang, China, the estimate in the 1980s was 810 individuals. Illegal hunting for both trade and subsistence is a major threat. [1, 3] Horns are valued in Chinese traditional medicine. [1] Increasing human populations and habitat loss from the conversion of forested habitats to agriculture in formerly undisturbed areas are other causes of concern. Enforcement of existing game laws is essential. [3]

Red Gorals are not yet a tourist attraction. Hkakabo Razi National Park in the North of Myanmar is still almost inaccessible. Some sightings of Red Goral by travelers are made at Mayodia Pass, Arunachal Pradesh, India and at Yarlung Tsangpo River, Tibet, China. 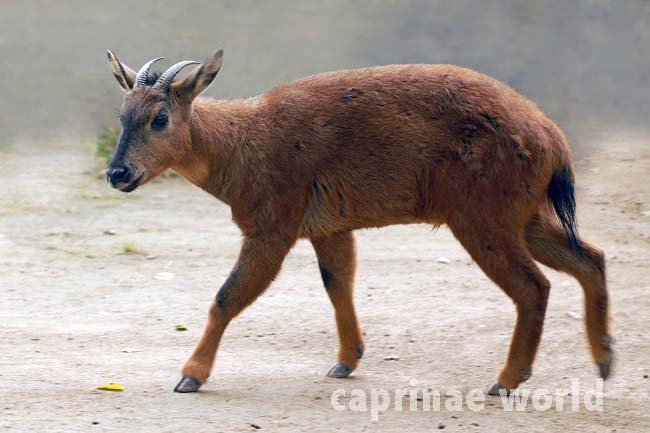 Following photos were taken near Mayodia Pass, Arunachal-Pradesh, India at the end of October 2017 by Ralf Bürglin 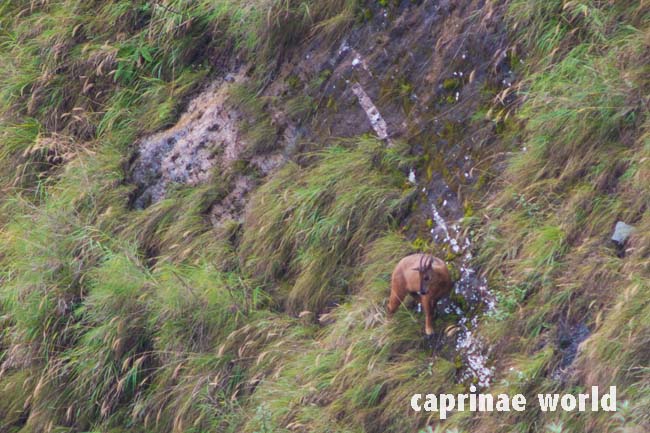 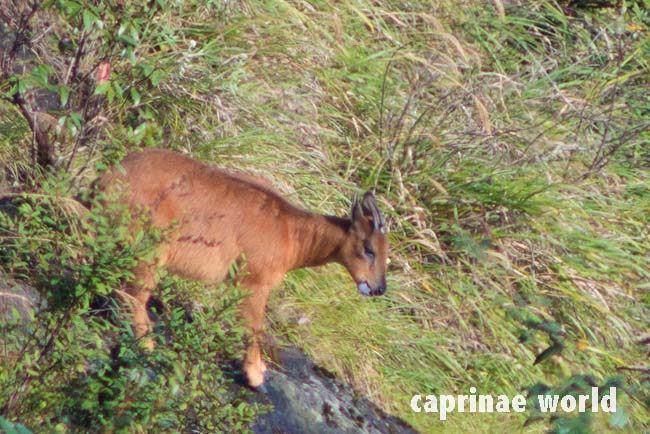 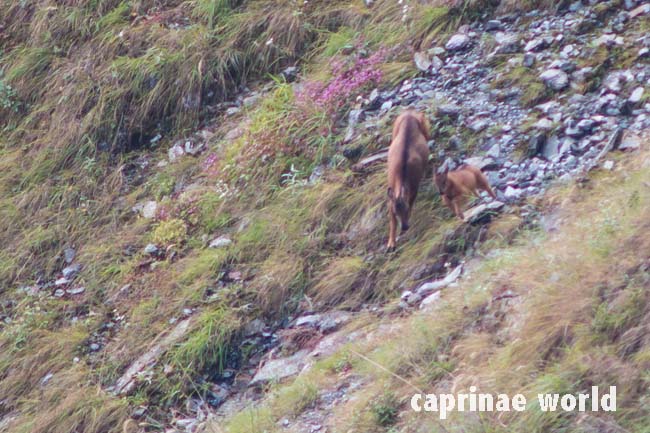 Mother and young of the year dashing down the hill. 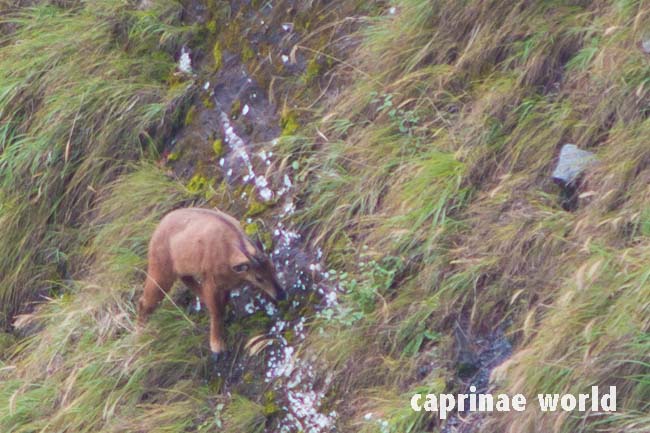 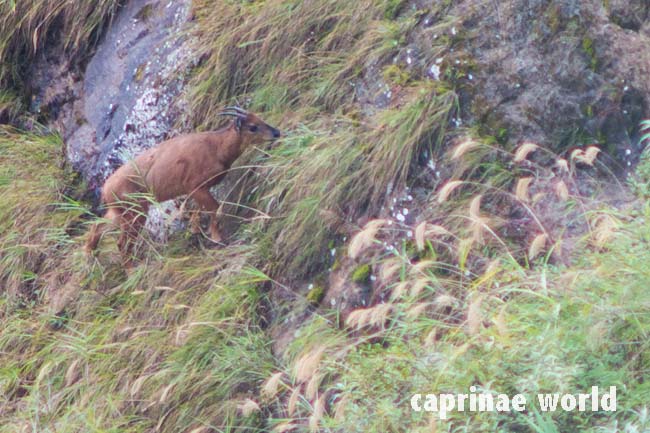 Same male than photo above. Note length of horns. 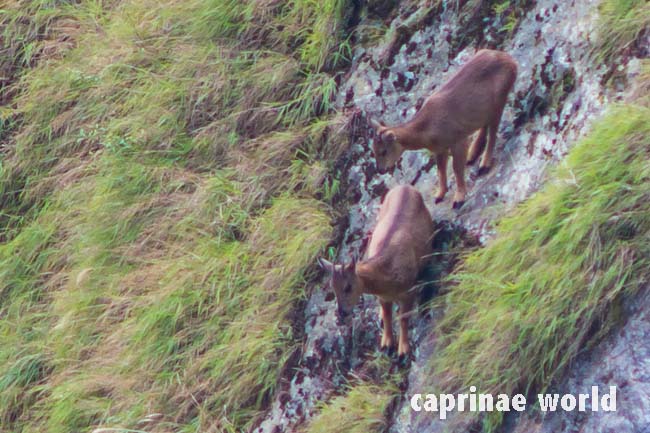 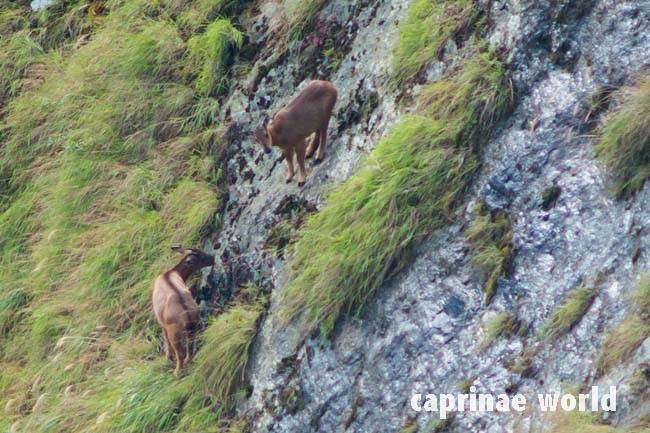 Female (below) and young. Female feeds on saxifragous plant matter. 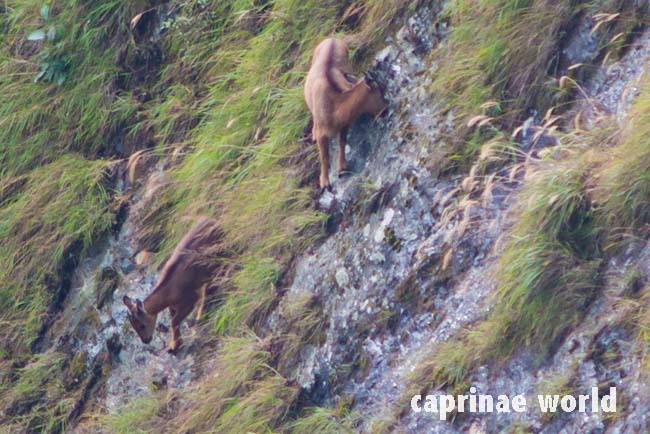 Female (above) and yearling. Female feeds on saxifragous plant matter. 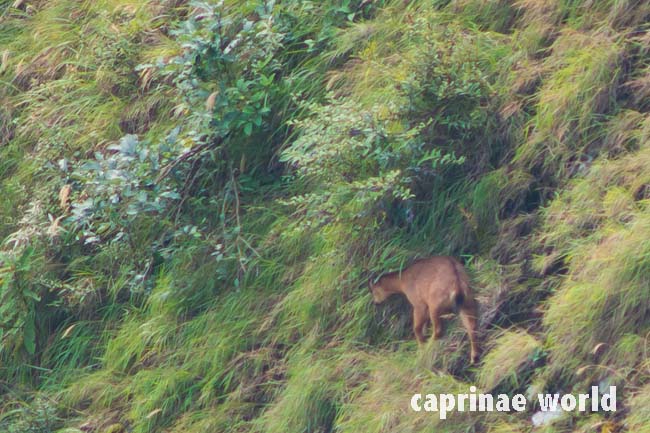 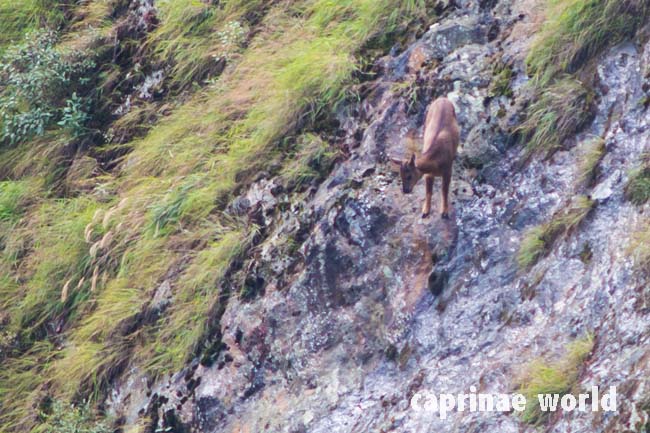 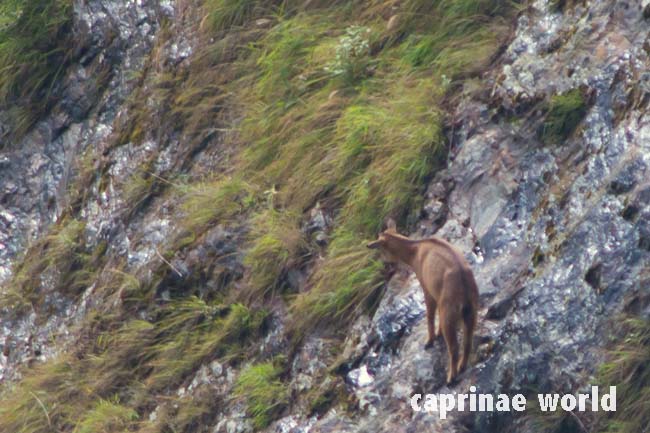 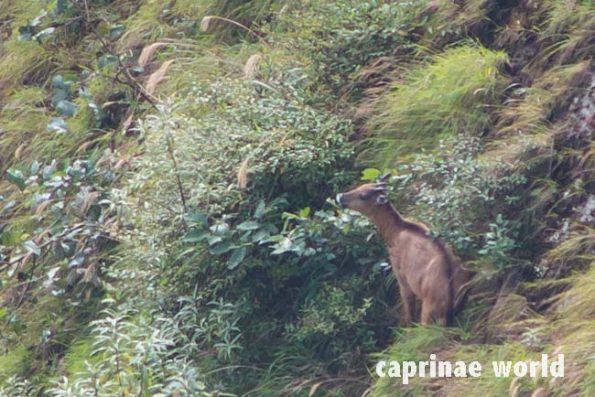 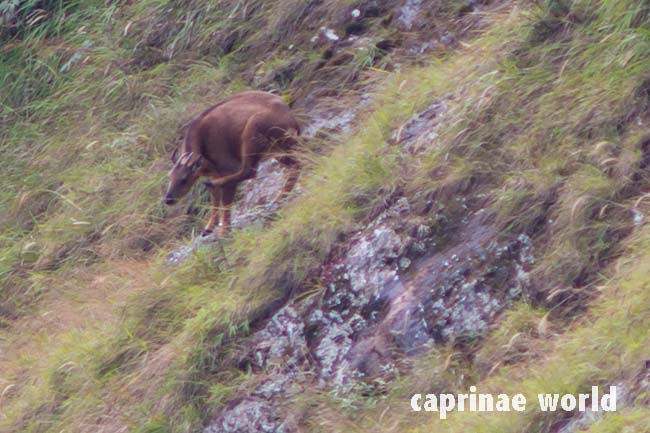 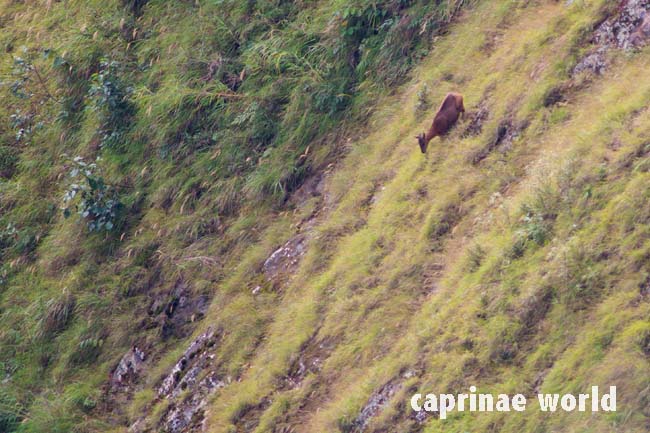 Red Goral in its habitat 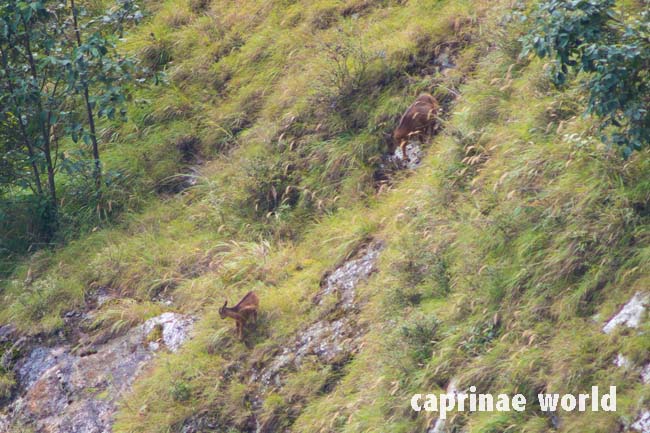 Young (below) and female. The young taking the lead. 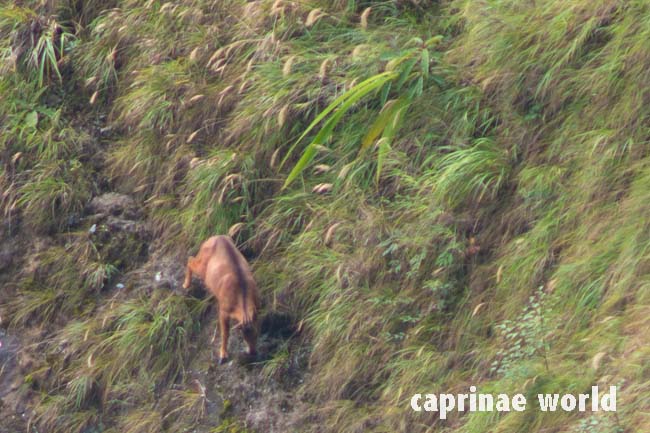 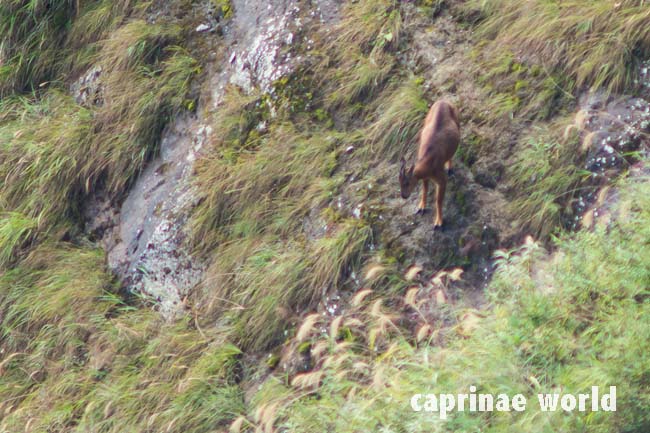