The Sichuan Takin is the neighbour of the Golden Takin to the west. Blotches of grey appear on its otherwise golden yellow pelage.

The subspecific name tibetana is based on mistaken geographic information (Lydekker 1908). [2]

The Sichuan Takin is found (largely [2]) along the eastern margin of the Tibetan plateau. Here, its distribution runs from the Min Mountains along the Sichuan-Gansu provincial border, south through the Qionglai Mountains west of Chengdu to the border with Yunnan Province. Records of this Takin have been found from more than 50 counties in Minshan in the north, Xianling in the west, as well as in the Qionglai Shan in the centre, and the Liang Shan in the south. [6] The distribution range appears to extend west into northeastern Xizang AR (Tibet) in deep river valleys (i.e. Ngawa, Drukchu). It also covers a small portion of northern Yunnan province adjacent to Liangshan Autonomous Prefecture in Sichuan Province. [2] 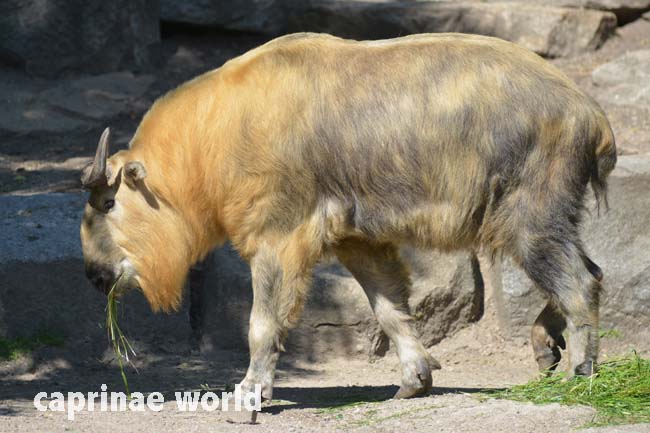 Takins have large, bovine-like bodies, a shaggy coat including long hair on the side and under the jaws, stout legs, prominent dew claws, and are taller at the shoulder than the hip. [16]

Descriptions of the body sizes are not consistent: Damm and Franco (2014) state that the Sichuan Takin is larger than Golden and Bhutan Takin. Matschei (2012) writes that Sichuan and Golden Takin are bigger than the Mishmi Takin. Castelló (2016) notes that the Sichuan Takin is the largest Takin. Wilson and Mittermeier (2011) do not see any differences in body sizes. The following measurements of Wilson and Mittermeier (2011) probably refer to Takins in general [16]:

The main varying scull character in Takin species / subspecies in the view of Groves and Grubb (2011) concerns the nasals, which are, on average, most arched in the Sichuan Takin  („Pal nas ht“ i.e., the height of the most convex part of the nasals above the palate) [4]. In simple words that means that the Sichuan Takin has the most distinct roman nose. But the number of specimens examined (n=5) does not meet the basic requirements of statistics. Nevertheless the profile of the female on the photo below is very impressive. More research is needed. 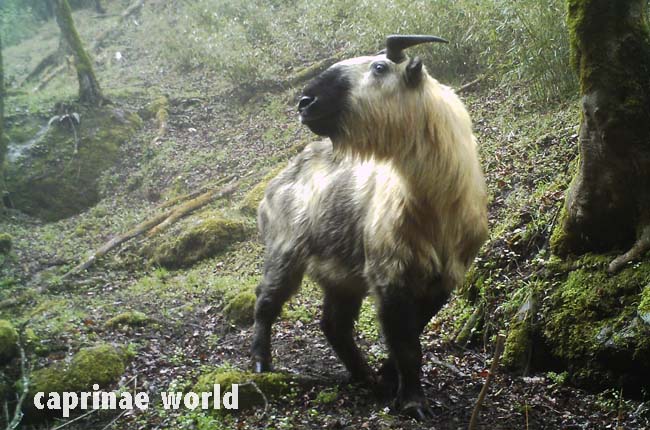 Accounts on pelage colour are not consistent. At this place we mostly highlight the descriptions of Damm and Franco (2014), which are most comprehensible.

pelage in general: light yellow grey or straw coloured; blotches of dark grey appear on its back, legs and rump; some specimens show fore quarters with orangey, reddish-brown to yellow colour, with the hindquarters predominantly darker and greyer. [2] 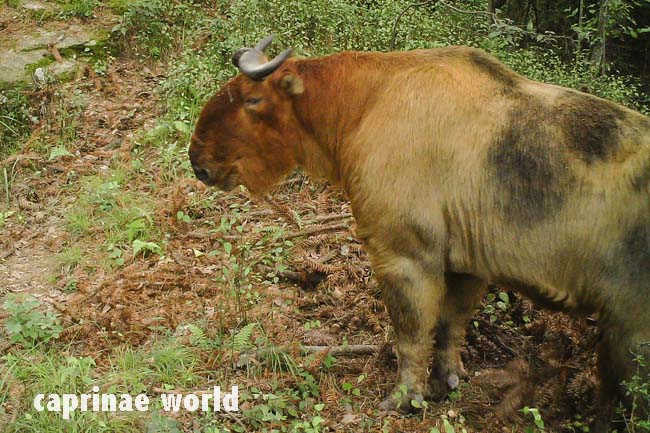 winter coat: more greyish; progressing to iron grey or blackish on limbs and hindquarters through the winter [2] 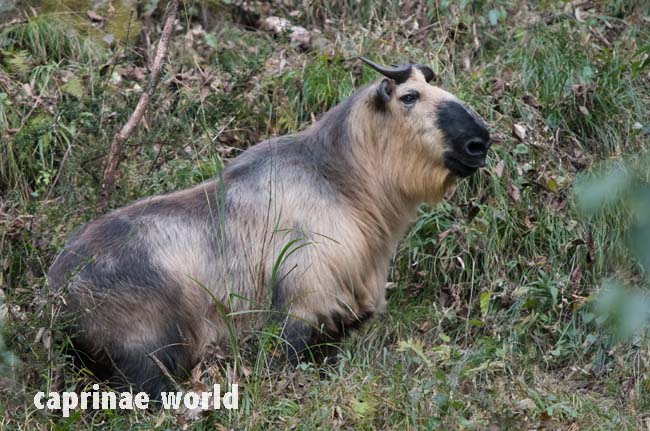 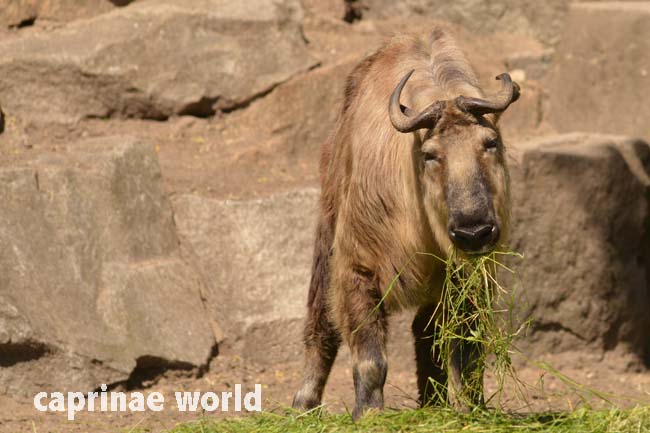 This female in June is rather uniformly brownish-beige. Photo: Bürglin, Tierpark Berlin, 2016-06-06 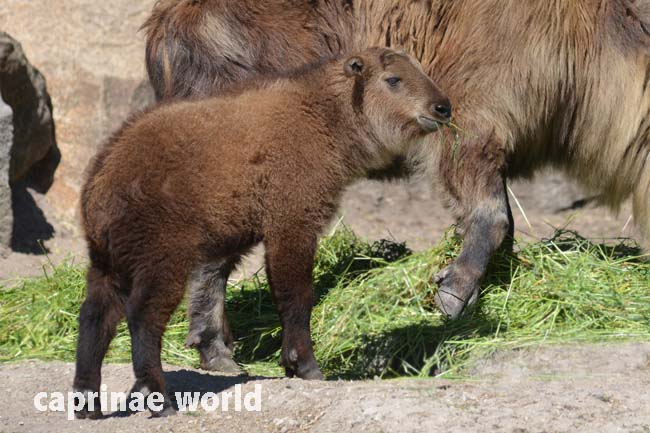 Sichuan Takin young. All young of the different Takin subspecies are rather hard to differentiate. They all appear more or less uniformly brown with somewhat darker limbs and a lighter back. Photo: Bürglin, Tierpark Berlin, 2016-06-06

From the number of Sichuan Takin photos available, it seems that specimens with blotches are typical. But there are also specimens occurring without darker patches on their pelages. Damm and Franco (2014, Vol. II, page 11) show a photo of such a Sichuan Takin, that they do not further comment. It shows a purely yellowish bull that looks rather than a Golden Takin. On the two photos below there are two more specimens without blotches.

The Sichuan Takin’s range borders that of the Golden Takin (There is a gap between the two ranges, but it is likely that – at least in former times – there was some exchange between the populations. It is therefore easily comprehensible that individuals within the range of the Sichuan Takin show physical characteristics of the neighbouring subspecies – and vice versa. More research is needed. 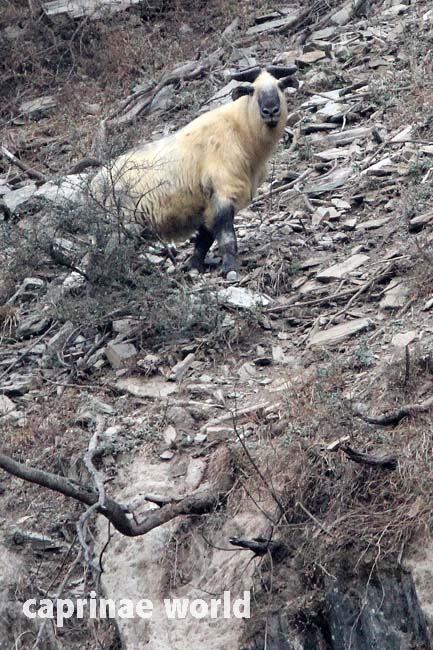 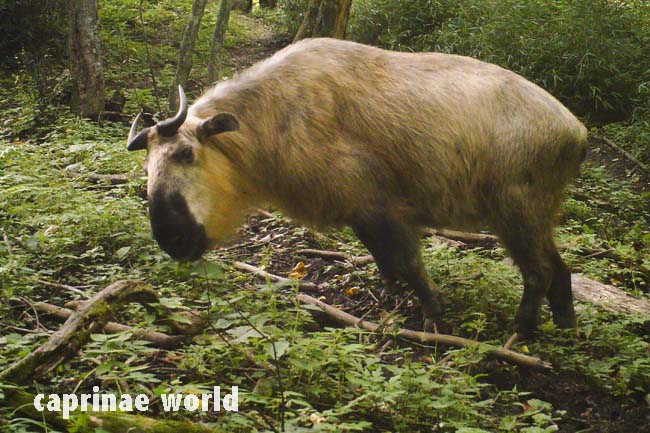 lower limbs: in some almost black [2]

darkish parts on head: ears, a ring around the eyes, and the front of the lower part of the face, as well as the tip of the chin, appear darkish, sometimes almost black [2] 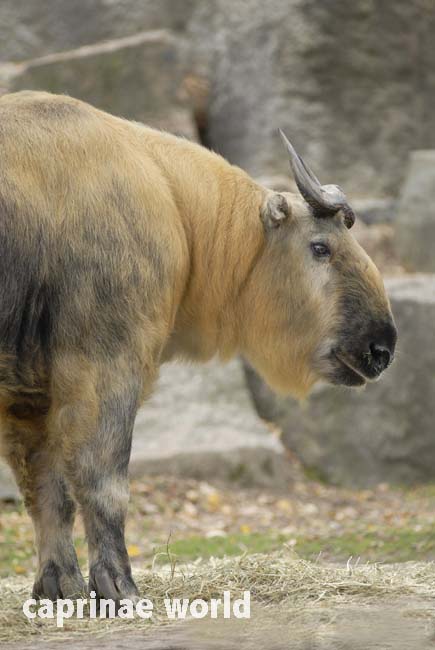 saddle: straw-coloured, often in darker individuals [2]; it should be discussed if the term „saddle“ really applies, since in photos of many animals the light area mainly covers neck and withers – and not the area between withers and haunches. 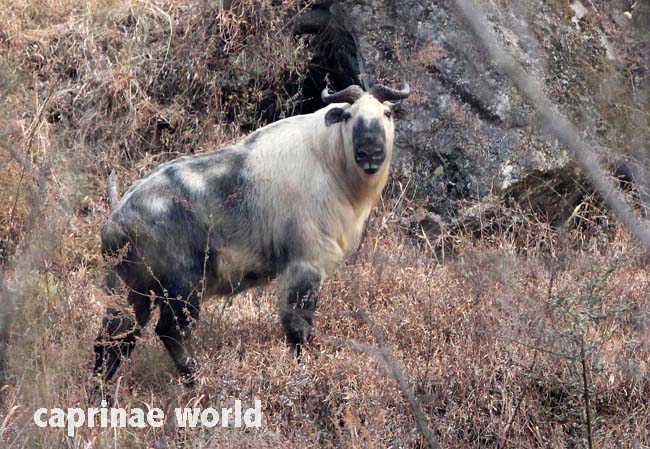 beard / mane: a shortish fringe of longer hair behind the chin extends a little way down the neck like a beard or bib; with lighter hair, more in some individuals than in others [2]; present in adults [4]

young calves: more brownish all over, whereas subadults approach the colour of the adults [2] 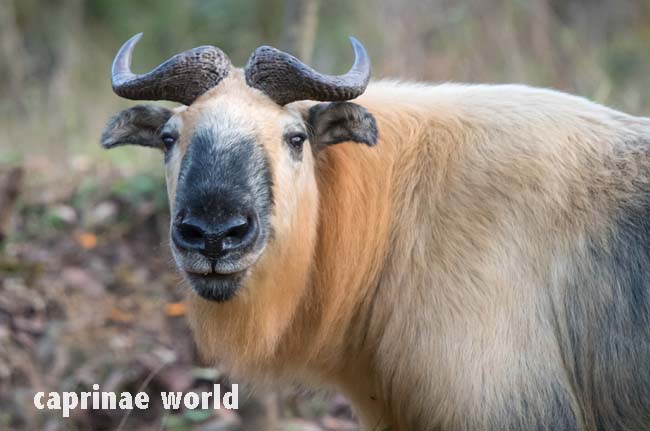 As in all Takins horns grow slightly upward, and then turn outward and backward with the horn tips upward. Males have larger horns than females. [16] The horns of Sichuan Takin may be somewhat more slender than those of Mishmi Takin (Lydekker 1908), and appear, in some cases at least, more arched and more distinctly ridged at base than in the typical species ((editor’s note: the Mishmi Takin?)). [2]

Rowland Ward (RW) has only three entries for Sichuan Takin, the longest horns from Tai-pei Shan (1921) attaining 54 cm in length and 20,5 cm in basal circumference, the other two trophies from 1921 and 1902 respectively are only slightly smaller. Two tip-to-tip spreads are recorded (34 cm and 29,8 cm). Safari Club International (SCI) lists 15 heads (taken between 1994 and 2005): the median length of both horns measured across the boss stands at 82,2 cm and the median boss with (measured across the base of the horns) at 29,5 cm. The individual measurements of RW and SCI are not comparable. [2] 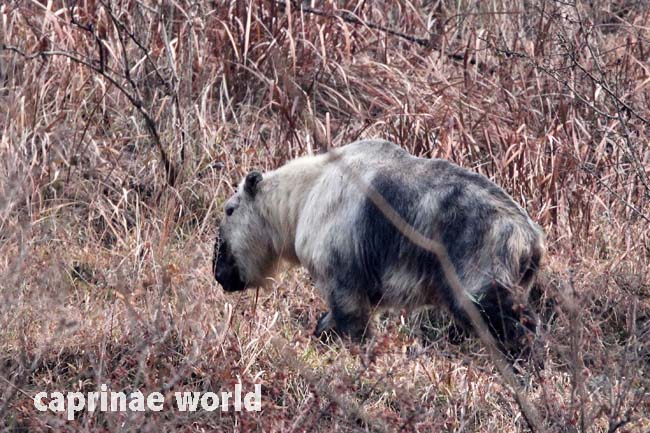 Sichuan Takins usually inhabit elevations at 1.500 to 3.000 metres. [16] They can be found at the uppermost limits of the tree line, reaching elevations ranging from 1.200 to 4.000 metres while in winter they find shelter and forage in the valleys. [2] 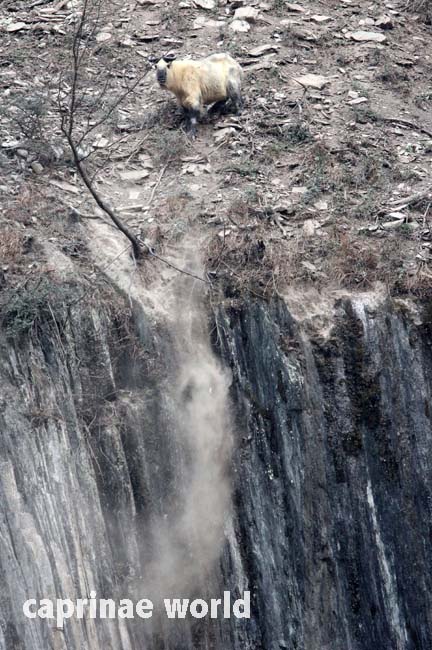 In the Tangjiahe National Nature Reserve in Sichuan, there are four principal vegetation zones, ranging from timberline above 3.200 to 3.300 metres to mixed coniferous and broadleafed deciduous forest at 1.700 to 2.100 metres; rhododendron and bamboos form an understory component at lower elevations. Vegetation communities below 2.200 metres have been modified by human activity. [16]

Takins readily utilize secondary growth in the reserves where lumbering is no longer allowed and, in such areas, numbers may be increasing (Schaller et al. 1986). [2]

Sichuan Takins are known to feed on 130 plant species, including 70 shrub and tree species. They are primarily browsers, but forbs are an important forage component in spring. They also frequent salt licks. Their tall bodies allow them to reach browse unavailable to smaller ungulates and their broad, flexible lips enable efficient and selective foraging. Takins may push over or break smaller trees to obtain browse. The also rear up on their hindlegs to reach browse up to 2,5 metres above the ground. [16]

Leopards (Panthera pardus) and Dholes (Cuon alpinus) feed on takins, but these predators are scarce. [16] 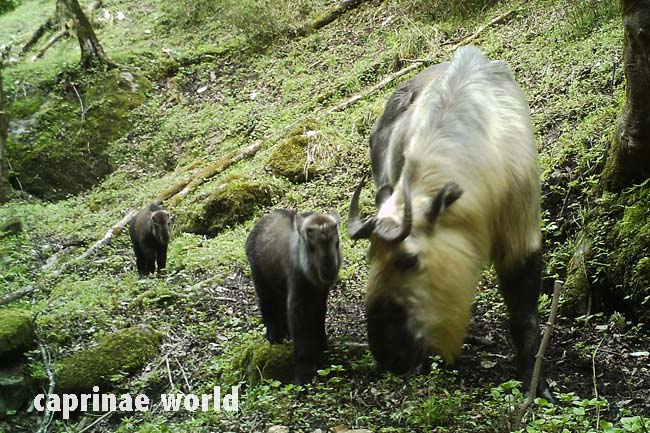 Takins in general make seasonal movements from alpine meadows in summer to lower-elevation forested habitats in winter. One Sichuan Takin male was observed to cover about 6 kilometres when foraging along a valley in autumn and winter. Based on 51 herds observed in the Tangjiahe National Nature Reserve, mean herd size was 39,6 animals with most herds composed of 10 to 45 animals. Estimated density of Takins was 1,2 to 1,3 ind/km². [16]

In another study of group composition and herd size in the same area, 85,7 per cent of the males were solitary, 8,3 per cent were groups of two males, and 4,2 per cent consisted of three males. Most mixed herds, made up of females, young, subadults, and adult males, consisted of 10 to 35 individuals; one herd of 93 to 112 Takins was recorded. Larger herds form in May after parturition and split into smaller groups by autumn. Young and yearlings each comprised 20 per cent of the population in May and November, indicating low mortality in these age groups. The sex ratio was 50 males:100 females. [16] 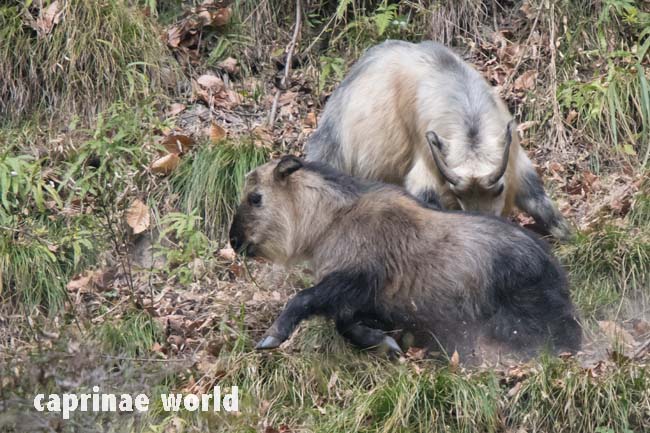 No total population for the Sichuan Takin (Budorcas taxicolor tibetana) estimate in China has been made, but several thousand animals are believed to inhabit the Qionglai and Min Mountains [6], where Schaller (1985) estimated highest densities. Damm and Franco (2014) assume that Sichuan Takins are the most numerous of the Takin subspecies. [2]

Overhunting (Poaching) has resulted in local extirpation of this takin in some areas of its range, and recovery has been slow despite legal protection measures. Habitat loss and disturbance from tourism are also significant threats. [6]

The Sichuan Takin is considered a national treasure in China and has been named a „First Order Priority Species“, giving it the highest level of legal protection. [2] Between 1963 and 1978, a total of 10 nature reserves were established in Sichuan to protect endangered animals. Most of them also provided protection for the Sichuan Takin. [6]

Protected areas with this subspecies include [6]:

Since that time, the nature reserve system with habitat for the Takin has continued to expand, including:

In the course of the Smithsonian Institution’s Giant Panda projects, the camera traps have also delivered photos of Sichuan Takin, which can be viewed at the Smithsonian Wild website. These projects are helping to establish a comprehensive mammal monitoring system in the area. [2] In respect of Takins one has to consider that a study, that aims to shine a light on forest dwelling Giant Pandas, is only restrictedly suitable for Takins, which move temporarily outside the Panda’s habitat, e.g. above tree line during the summer.

The primary conservation measure proposed is further scientific study on the ecology and management of this subspecies is necessary for its long term conservation. [6] 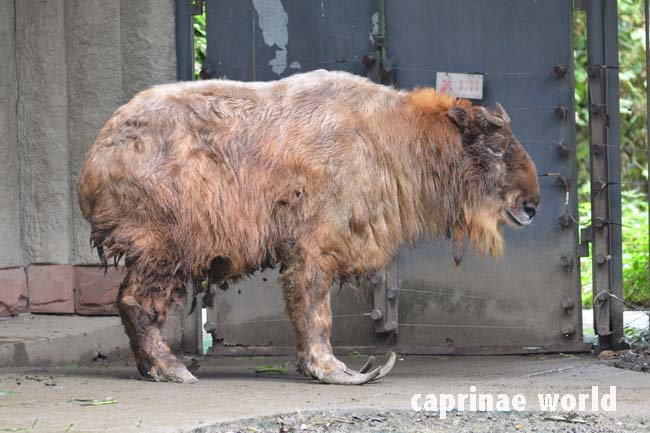 Sichuan takin female at Chengdu zoo. Could this be improved? Photo: Bürglin, 2018-10-20

Mammal watchers have reported sightings from Tangjiahe and Wolong National Nature Reserves, whereas most sightings are probably made at Tangjiahe. 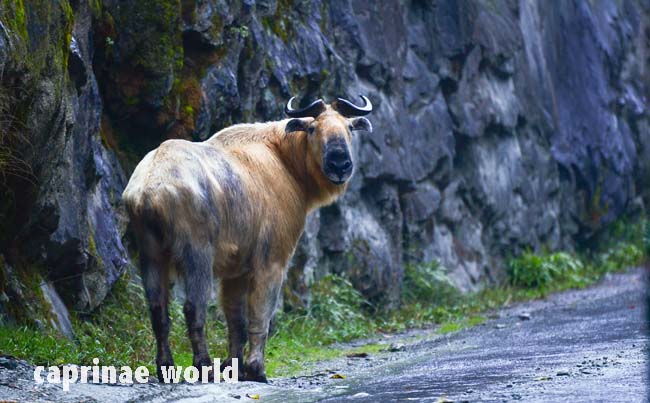 In Tangjiahe Nature Reserve Sichuan Takin can be seen along the road in autumn. Photo: Christopher R. Scharf, 2014-11-08