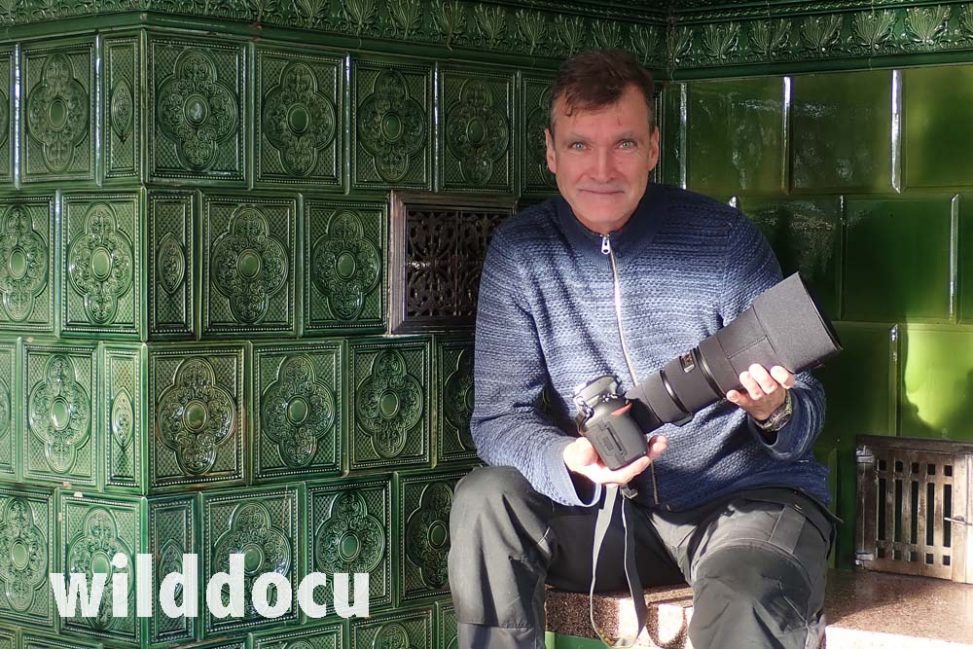 Maybe some of you remember that I had promised to write a review on a lens my wife wanted to present me for having won the „NUTTER Awards 2018 / category: Best Obscure Mammal“. Here you go!

I don’t know if anybody has ever tested a lens for the mammal watching community. I give it a try.

At first let me explain why I believe mammal watchers have special needs concerning photo equipment / lenses and why they are different to those of wildlife photographers. The following table presents some of these differences – as I see them:

After nine (!) months of waiting I finally received my present. I had planned a trip to Spain in December. I took the lens with me – knowing that that time is not ideal for small mammals.

The last decades I have always worked with big lenses and so I am used to heavy weights. Now the lightness (less than 1,5 kg) and easy handling of the 500 pf really is something else. It is truly fantastic how you can move around, lay on the ground, raise it to photograph some overflying birds. And it’s small enough to rest it on your lap while you drive a car. For comparison: the Nikon AF-S NIKKOR 200-500mm f/5.6E ED VR is about the same size, but 2,3 kg heavy.

The lens you should directly compare with the 5.6/500 pf is the 4.0/500. I haven’t had the opportunity to do that. Others did it and found no differences concerning sharpness under „normal“ conditions. Following I give you plain results – and you decide if the image quality is good enough for you:

It was mating season for the Pyrenean Chamois and I got several times the opportunity to shoot dashing males. The D850 + 5.6 / 500 pf combination delivered a less than 70% hit-rate, where the images were in optimum focus. This doesn’t sound much, but a passing chamois in full speed is very challenging and I could produce around 20 images while the animal was near me in an optimal angle. That makes around 6 photos. Enough for me!

A passing Raven (ca. 30 m overhead) held something in its beak.

Later at home I cropped the image to find out if there were some mammalian traces between the bread halves (like some goat cheese or salami slices).

Third opportunity to test focus speed and -quality: A bustling Iberian Chiffchaff moving in the canopy of an oak tree at around minimum focus distance (which is at 3 m in the 500 pf). This motif was even more challenging and it took around ten attempts (hand-held). But the result is again stunning!

Of course an F4 is to be preferred to an F5.6. An extra stop of light can have advantages. But: When ever possible I try to close the aperture to around F8 for extra depth of field. Therefore in many situations I don’t care about a minimum numeric aperture value. In low light though or when subjects are moving quickly, I would rather choose a F4 at 3200 than the F5.6 at 6400 – if I don’t have to worry about the extra weight.

Dashing Chamois, Bearded Vulture in flight, whirring Chiffchaff – I held camera and lens just in my hands and the VR worked excellent. On the other hand there are many occasions where I depend on a tripod (mainly avoiding high ISO in low light) – or some other kind of support. In the alpine zone of the Pyrenees and the Cantabrian Mountains I relied invariably on rocks as a tripod substitute and used a jacket to get the camera in the desired position. I found it much easier to align the small 500 pf compared to a bigger one. Rock instead of tripod: this might not sound professional, but consider the rough terrain I was in. I am sure I got more opportunities to shoot with the light 500 pf, because I was faster and more mobile and thus created more situations, where I could actually press the button.

I personally believe that zoom lenses are overrated. Most of the time people use the greatest focal length available anyway. And when you are tired of having your chamois full frame, wait until it leaves or leave yourself and then take another shot from a greater distance.

500 mm: It doesn’t sound like an allrounder, but it really can be. At 3 m minimum focus distance it’s good enough to get a decent image of even the tiniest mouse. On the other hand 500 mm can be also good for landscape photography.

Then, when it comes to really shy animals like Chamois that are exposed to hunting or a Snow Leopard high up on a ridge, 500 mm might not be enough. But you just have to make a decision: above 500 mm there is not much worth debating. The 4 / 600 mm and the 5.6 / 800 mm are both monsters and you then play in a different weight class.

The Nikon 500mm F5.6E PF is a super sharp, lightweight, easy maneuverable, easy to use handheld, allrounder lens – that has the potential to upgrade a mammal watcher to a wildlife photographer. When it comes to taking pictures in a dark forest or over long distances, I personally prefer a lens with a smaller F stop value or a longer focal length respectively. If you say the greater weight and bulkiness of the bigger lenses is not worth it, than the 500 pf is your ultimate lens.