The Pamir Argali appears to be the most fascinating Argali, with the Tianshan Argali standing in it’s shadow. But this is not justified, particularly since the two phenotypes are hardly distinguishable.

Some authors classify the Tianshan Argali as a separate species (Ovis karelini) [1, 4, 15]. But even on a subspecies level it is difficult to split the Tian Shan phenotype (Ovis ammon karelini) from others like Pamir Argali (O. a. polii), Kyrgyz Argali (O. a. humei) or Karaganda Argali (O. a. collium), because they are so similar. [2]

Distinction according to Geography: Since pelage colouration is very variable in all Argali types the three phenotypes Tian Shan, Pamir and Kyrgyz Argali are basically distinguished only according to geographical location. [2] But even this is doubtful, since assumed distribution ranges within the same region, e g. the Tian Shan, can not be clearly separated into subregions.

Looking at Marco Polo Argali specimens depicted in Damm and Franco (2014), 39 out of 45 are clearly dark.

And concerning the dark flank stripe, Nasonov (1923:75) disputed Severtzov’s conclusion that karelini differs from polii by having a dark flank stripe and a dark band that separates the rump patch from the dark fur of the back. Nasonov claimed that such markings are found also in polii skins in the Moscow Museum. Nasonov’s observations are partially confirmed by Clark (1964:57), who noted in polii a slightly darker stripe running from elbow to flank. [2]

More research data for body measurements and comparative photo series of seasonal pelage colouration need to be collected and evaluated. [2] 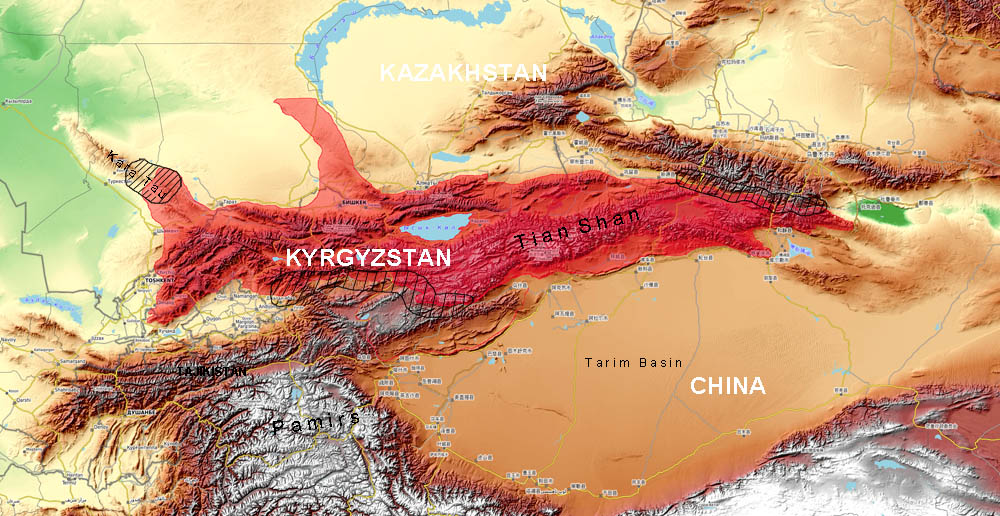 Tianshan Argali ccur in the west of the Tianshan Mountain System (except West Karatau), just east of the cities of Jambul and Shimkent in Kazakhstan and the city of Tashkent in Uzbekistan, and extends east through Tianshan Mountains (excluding inner Tianshan) surrounding Issyk-Kul Lake and Jungarian Alatau, and in China at the edge of the distribution of the Gobi Argali (O. darwini) on the Chinese-Mongolian border. [15]

In the Caprinae Action Plan Shackleton (1997: 190, CIS) writes: „This Argali is distributed on the northern flanks of the Tien Shan in Northeast Kirgizstan and Southeast Kazakhstan, where it occupies a wide variety of habitats from high mountains to desert regions. Its western limit is in the Talass (Talasskiya) Alatau just east of Chimkent, from where it extends east to Lake Issyk-Kul north of the Naryn River. It also stretches into the Kungey Alatau and Zaili Alatau which lie to the north of the Lake Issyk-Kul. Further east the distribution continues into the Ketmen Mountains on the border with China, and further north it is found in the low Chu-Ili Mountains northwest of Alma-Ata, and in the Dzhungarian Alatau east of Taldy-Kurgan. The Tienshan Argali is also found in the low mountains south and southeast of Balkash Lake (the Kyskhash, Arganaty, Arkharly, Dzhambul and Baigora Mountains).“ [11]

overall body colour in winter: grey-coloured (males) [4]; grey-brown; light-brown (one male in mid-September, when the winter coat had begun to grow) [2]

ruff: prominent white, with longer hair than body hair surrounds neck [15]; hair on the front of the chest and the base of the neck slightly elongated (up to 10 cm) [4]; long-haired and whitish right back to the shoulders, giving the white neck appearance of an old bull caribou [2]

flank stripe: distinct, separates the dark body hair from the paler belly hair [4] of both males and females, but is more conspicuous in females [15]; in mid-September: dark, running from the elbow, where it is perhaps 10 cm wide, in quite a quick taper to the flank [2]

Horns of Tianshan Argali are homonymous – like in all other Argali. Karelini horns are similar in shape to those of polii, but they arise from the skull in a steeper angle and tend to be shorter and thicker, with increased rounding of the combat edges and the development of a second combat ridge. The horns are thus intermediate in character between those of polii and ammon. [4]

In general Argalis from the Tian Shan (also Ala Tau, Pamirs and Kara Tau) have lighter and slender horns compared to those from Altai, Tibet, and Mongolia (ammon, hodgsoni and darwini). [10] cross-section: The horns of karelini are more rounded in cross-section, somewhat thicker at the base, and more wrinkled than those of polii (Miller, 1913; Wood, 1910). [10]

combat edge: The presence of angles on the front of horns seems to be correlated with bulk: As horns increase in circumference they become more rounded, producing in this instance a cline from polii to karelini to ammon (Geist, 1971a). [10]

flaring: Karelini horns show an intermediate amount of flaring (Carruthers, 1913). [10] The terminal portion of the horns relatively weakly bent sideways, rising up almost parallel to the base. The outer ridge is not so distinct; the base of the horns is blunted. [4]

The Tianshan Argali occurs in diverse habitats, ranging from lowland semideserts in the Kalkan Mountains to typical highland montane steppes, subalpine meadows, and other subalpine areas in Western and Central Tian Shan. [15] In general most Argali live on alpine grasslands between 3.000 to 5.500 m [15], generally avoiding forested areas. [6]

In the Kalkan Mountains, females occur in more precipitous broken terrain in summer, and males occur on plateaus and rolling hills. Formerly animals migrated seasonally from higher mountain habitats in summer to wintering sites in lowlands and foothills with lower snowfall accumulation. [15] In general Argali are sensitive to deep snow, particularly if forage is limiting. [6] But because lowland areas have been deleteriously affected by livestock intrusions and human settlements, Tianshan Argali remain at higher elevations year-round. [15]

In the Jungarian Alatau, about 30 per cent of mortality was due to wild predators. [15]

lamb-survival: highly variable; in one instance, mortality during the first year of life was 57 per cent. During especially cold winters and drought, lamb mortality can exceed 90 per cent. [15]

Snow Leopards (Panthera unica) also prey on Argali, especially if they are the most numerous ungulate. [15]

sexual maturity (Argalis in general): females at 2 years, males not until 5 years [6]

breeding season: usually lasts one month, from mid-October to mid-November [15]

environmental factors influencing conception: Up to 34 per cent of females did not conceive after a drought the previous summer. [15]

lambs-per-female-ratio: varies from 0,22 in the high-elevation Terskey Alatau to 0,75 in the semi-desert Kalkan Mountains. [15] Among 66 Tianshan Argali ewes there were 65 per cent with single young, 33 per cent with twins, and possibly one set of triplets (Heptner et al., 1966) [10]

similar to other Argali; In the Kalkan Mountains, where winter is characterised by fierce winds, the animals usually avoid feeding during high winds. [15]

Seasonal migrations of up to 70 km were characteristic in the past, when Tianshan Argali crossed broad valleys, rivers, and even railway tracks. Usually these migrations were to avoid deep snow at higher elevations. Severe drought and extreme high temperatures could also initiate movements, as in the semi-desert Kalkan Mountains. Seasonal movements also may be caused by anthropogenic factors, such as the presence of livestock and related human disturbance. Herds of Tianshan Argali are usually small. In the Aksu-Djabagly Nature Reserve, the two larges herds consisted of 37 animals in spring and 52 in summer. The annual average group size was 15,5 for female groups and 7,5 for males. Usual group size in the Jungarian Alatau, Terskey Alatau, and Trans-Ili Alatau is 2 to 6 animals. [15]

classified as „Near Threatened“ on the IUCN Red List under O. ammon [6]

Previously there was little consensus regarding the abundance of Argali in Kyrgyzstan. Luschekina (1994) counted 565 individuals in the western part of the Kokshalatau Range in summer 1993. Based on these counts plus older, unpublished counts, she extrapolated an estimate of 6.000 argali in Northeastern Kyrgyzstan. Magomedov et al. (2003) surveyed 190 km of transects in a similar area during spring 2002, tallying 717 Argali. Weinberg et al. (1997) reported “no more than 2.000” Argali in Tian Shan (which may have included parts of Kazakhstan). Weinberg et al. (1997) believed Argali in Tian Shan were declining. Fedosenko and Blank (2005) reported estimates of Argali in Kygzystan as 5.000 in the Tian Shan, but without citing sources or methods. Based on extrapolations from counts in Aksai, Arpa-Naryn, Dzhety-Oguz, and Issyk-Kul oblasts, Kyrgyz government surveys have estimated approximately 15.900 argali in 2006, slightly lower than in previous years, and down from an estimated 26.000 in 2003. [6]

The main threats for Argali in general are over-hunting and poaching (for meat) [6]. Shackleton (1997) mentions not only poaching by locals but also by some officials (Green and Nahon 1995) [11]. Furthermore competition, displacement and possibly disease transmission by domestic livestock; and habitat loss are mentioned as threats. In general, Argali appear to be extremely intolerant of human disturbance (Fedosenko 1999, Namgail 2004, Maroney 2006, Namgail et al. 2007, Harris 2007, Schaller and Kang 2008.) The mentioned threats appear to vary little among Argali populations, even though habitats vary. [6]

Kyrgyzstan: There is general consensus that habitat conditions for Argali improved after Kyrgyzstan’s independence in 1991, due to the collapse of the state-supported livestock sector and consequent reduction in grazing pressure in the Tian Shan and Pamirs (Farrington 2005). It is unclear whether relatively low livestock density near the Chinese border will continue. Poaching and competition with livestock are also considered threats in Kyrgyzstan (Weinberg et al. 1997). After independence in 1991, the number of domestic sheep herded into Argali habitat declined dramatically, which likely had a beneficial effect. However, since 2000 there have been informal reports that livestock numbers have again risen. [6]

In 2001, Safari Club International Foundation in collaboration with the Russian Academy of Sciences and authorities of range states has launched a conservation-hunting programme in Kyrgyzstan aimed at the development of sustainably managed trophy hunting programs on argali, including survey design, habitat assessment, GIS databases, public education, development of legislation, etc. These programmes were supported to varying degrees by the CITES Secretariat, EU, USFWS, WWF and others. [16]

In Kyrgyzstan and Tajikistan, the Regional Programme on Sustainable Use of Natural Resources in Central Asia implemented by GIZ (Deutsche Gesellschaft für Internationale Zusammenarbeit) on behalf of the German Government since 2009 supports activities on sustainable management of mountain ungulates focusing on development of a legal framework, capacity development for wildlife monitoring and improvement of hunting areas management, and in particular, introduction of community based approaches. All assigned hunting concessions have been mapped in GIS. Substantial support has been provided to the development of draft new hunting laws that provide for clearer regulation and incentives for sustainable hunting and wildlife management. Community based management approaches are demonstrated in pilot areas and capacity building for a country wide allocation of hunting areas to groups of local hunters is underway (Rosen 2012). [16]

Research programme: In Kyrgyzstan, there is a state research programme on the status and conservation of argali and Siberian ibex 2010-2014, confirmed by Government decree No/ 238 of 11 October 2010. In Kyrgyzstan and Tajikistan a methodology for monitoring argali and Siberian ibex using standardized field forms has been developed with the help of IUCN Caprinae Specialist Group and GIZ. A Russian-language monitoring handbook and manual on use of GPS have been developed as part of this activity. [16]

In 2001, Safari Club International Foundation in collaboration with the Russian Academy of Sciences and authorities of range states has launched a conservation-hunting programme in Kyrgyzstan aimed at the development of sustainably managed trophy hunting programs on argali. [16]

In February 2006, the United State Department Fish and Wildlife Service suspended their program of issuing import permits to US hunters taking Argali in Kyrgyzstan, pending receipt of additional information on the status of the taxon there (M. Carpenter, USFWS pers. comm., 2006). Issuing permits was partially reinstated in 2007, with 10 permits allowed. [6]

[10] Schaller, George B., 1977: Mountain Monarchs – Wild Sheep and Goats of the Himalaya. The University of Chicago Press