The Alpine ibex lives in the mountains of the European Alps. It’s conservation success story is unsurpassed.The Alpine ibex (Capra ibex) is the least colorful of the Capra species. Males have a relatively short beard. It can also be distinguished from other ibexes by its horns which have rounded anteroexteral corners.

In the 19th century Alpine ibex were almost extirpated. Today the conservation status of the species is considered to be of „least concern“ by the IUCN. Therefore the Alpine ibex stands for one of the great success stories in wildlife conservation. Legal hunting today does not threat the species. 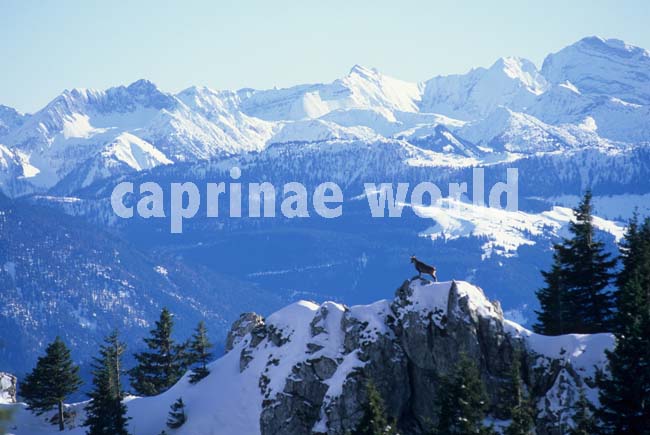 The Alpine ibex is the least colorful of the ibex species(7). In winter, older males are dark chestnut brown with white belly; sides of body, lower chest, and legs are dark; tail is black and bushy. White, narrow rump patch is restricted to area about the length and width of the tail. Females are uniformly brown but with a black tail and dark stripe along lower portion of body. Miscellaneous: Calluses develop on the carpal joint of front legs. In summer, males and females are yellowish-brown but males have paler neck, forehead, and flanks.(2) 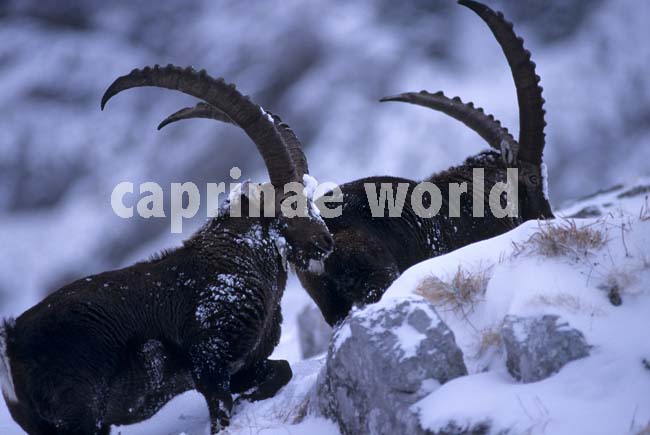 Male horns grow upward and diverge in a scimitar shape. Species characterized by the anteroexteral corner of the horns rounded.(1) Horn growth is greatest during the second year, with significant individual heterogeneity in horn growth. Individuals with the longest horn growth as young adults also have the longest horns later in life; longe horn length in adult males is indicative of genetic quality.(2) 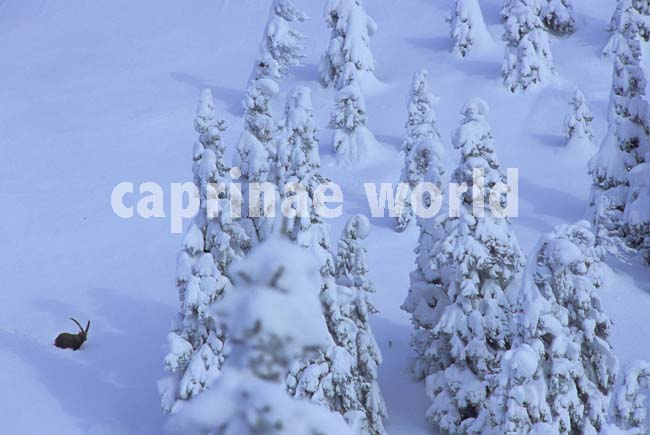 Annual diets consist of about 60% grasses, 38% forbs, and 2% browse. Consumption of browse increases in winter and spring.(2) 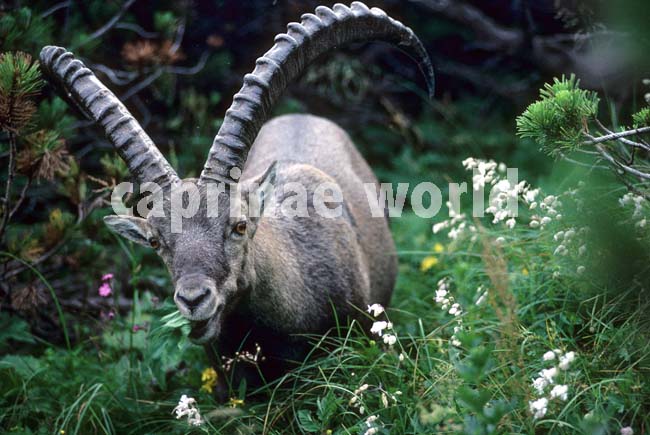 This chap enjoys his forbs on the plateau of the Benediktenwand, Germany 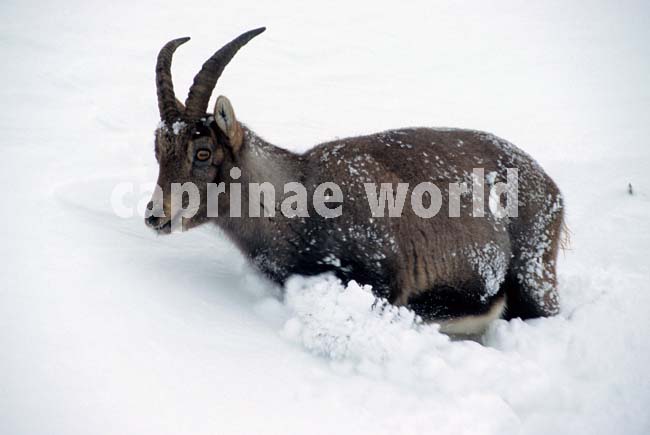 Sexual Maturity: 1.5 years, female’s first precnancy can be delayed until 3-4 years of age or later in high-density and poorly nourished populations. 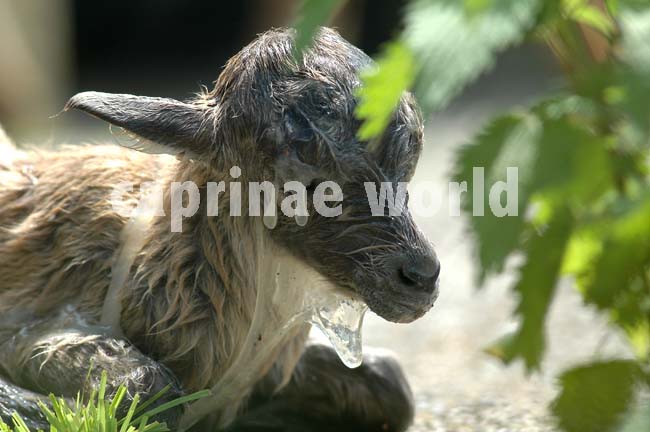 Grazing of this diurnal species occurs primarily during the morning and late afternoon (4). On average, males spend 51% of their daily activity budget grazing, 38% resting, 4,8% standing, 2,4% moving, and 3,8% in other activities. Ibexes move to higher elevations and nearly stop feeding during hot and sunny days, and remain at lower elevations and feed at all hours during cooler and cloudy days. In a study heavier males moved higher copared to smaller males, given the same increase in air temperature. Small males spent more time feeding than large males. Males also spent more time lying, standing, and walking than females. Males of all ages spend less time foraging during the rut than before or after the rut.(2) 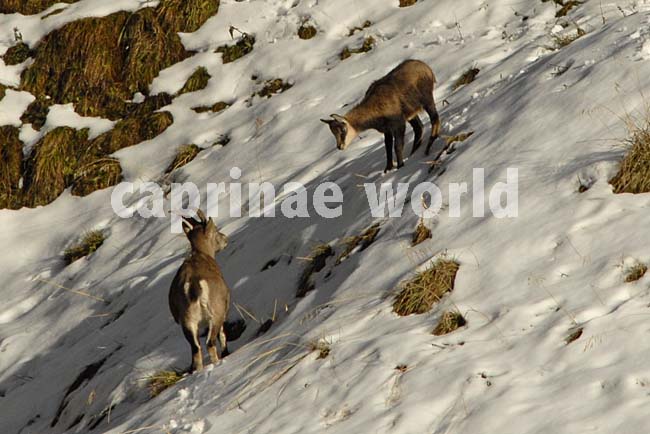 Alpine ibex and chamois (right) share some parts of their habitat.

During the winter, Alpine ibexes may move to lower-elevation, snow-free areas. In winter they also prefer south- and south-west-facing slopes that are steep and snow free.

During spring they follow the retreating snow line upward, feeding on fresh plants, they remain at higher elevations from July to October. There is usually overlap between winter and summer ranges. Female with young use habitats in or close to precipitous, rocky terrain. Males are not so much dependent on steep slopes. They move greater distances than females, seek out alpine meadows, and make more frequent use of areas disturbed by humans, such as roads, villages, and hiking trais, which are charaterized by higher forage quality.

Males and females are spatially segregated from spring to autumn. Males join females during the mating season. Males associate with other males of similar age and social status. Adolescent males remain with females until about age three, when they join male herds.(2) 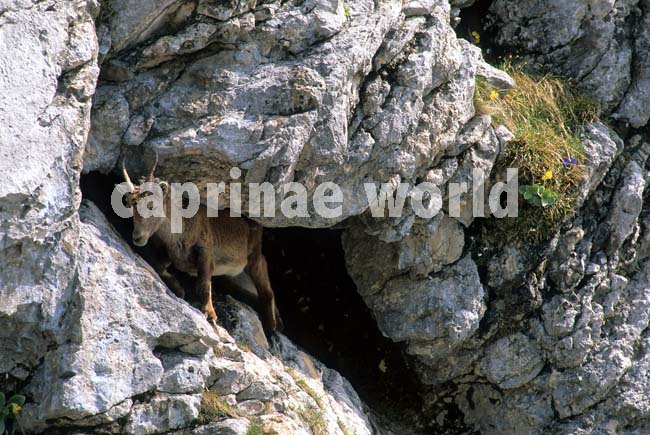 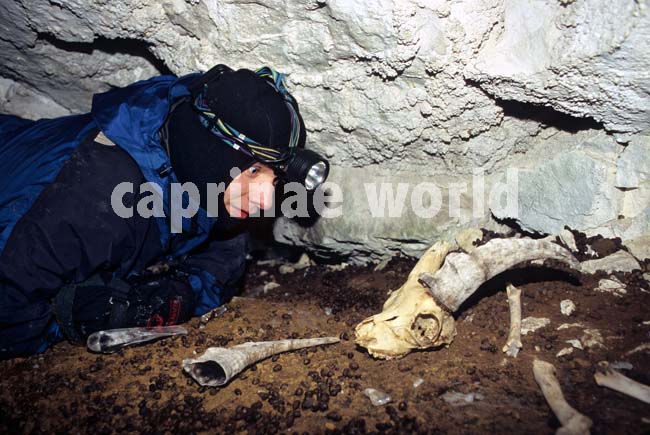 … they also seek shelter in caves and die there.

IUCN Red List: least concern. The Alpine ibex was on the verge of extinction in the 1800s, just one protected population remained – less than 100 animals (7) – in northern Italy (today: Gran Paradiso National Park) and the neighbouring French valley of Maurienne (today: Vanoise National Park). This area is the source from which reestablished populations in the Alps originated.(2) The introduced populations of ibex appear to have low genetic diversity(3). Nevertheless this has so far not been an obstacle in succesfully establishing populations. Number of mature individuals today: 31420.(4) Alpine ibex are one of the great stories of wildlife conservation.(1) 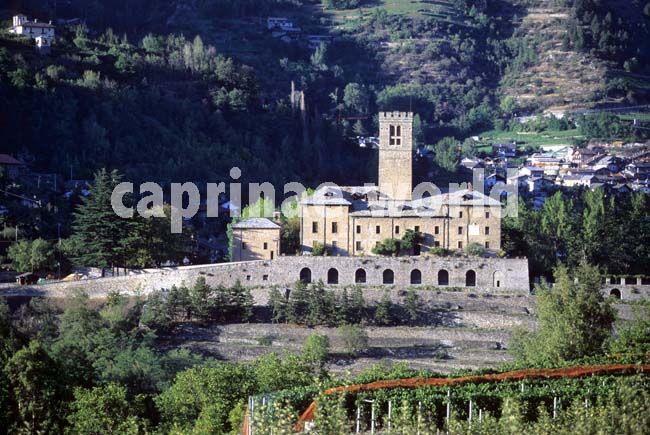 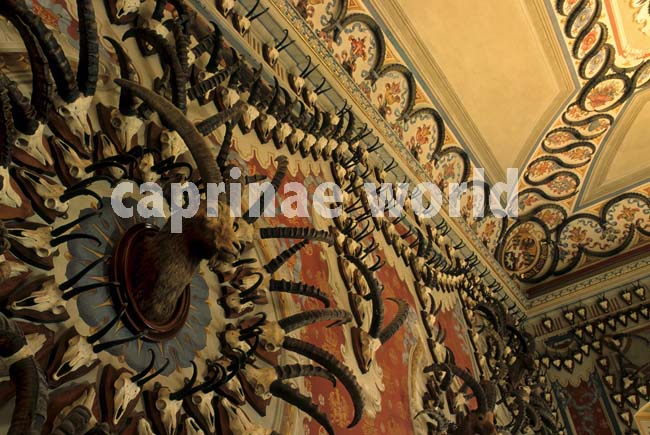 Inside Castello di Sarre one finds prove for the excessive hunting passion of Emanuele Vittorio II.

Hunting is allowed in managed populations in Switzerland, Austria, Liechtenstein, Bulgaria and Slovenia.(2;4) Legal hunting is well-managed and is not considered a threat to the species.(4) 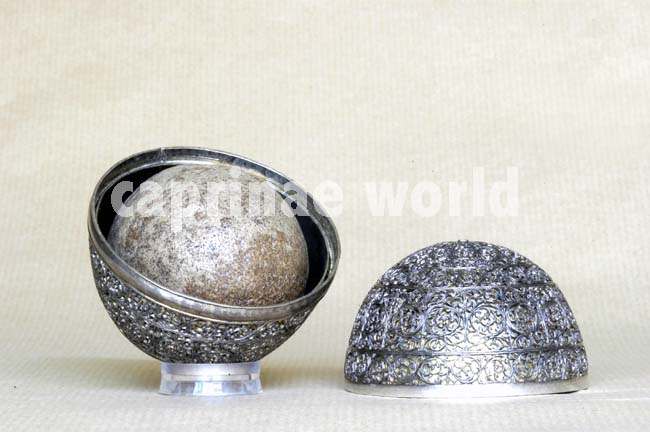 Traditionally Alpine ibex were also hunted for body parts like this bezoar, which can be found in the stomach of ibexes. 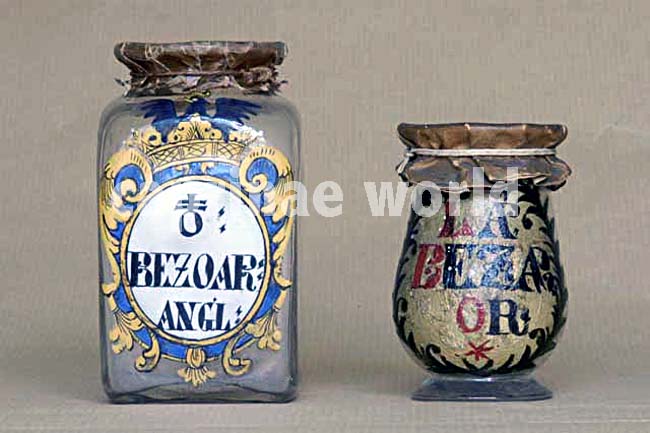 The bezoar was used in traditional medicine. Bezoars were believed to have the power of a universal antidote against any poison.