The Red Serow is almost a mythical animal. Very little is known. And it is definititly a candidate for a possible taxonomic split in the future. 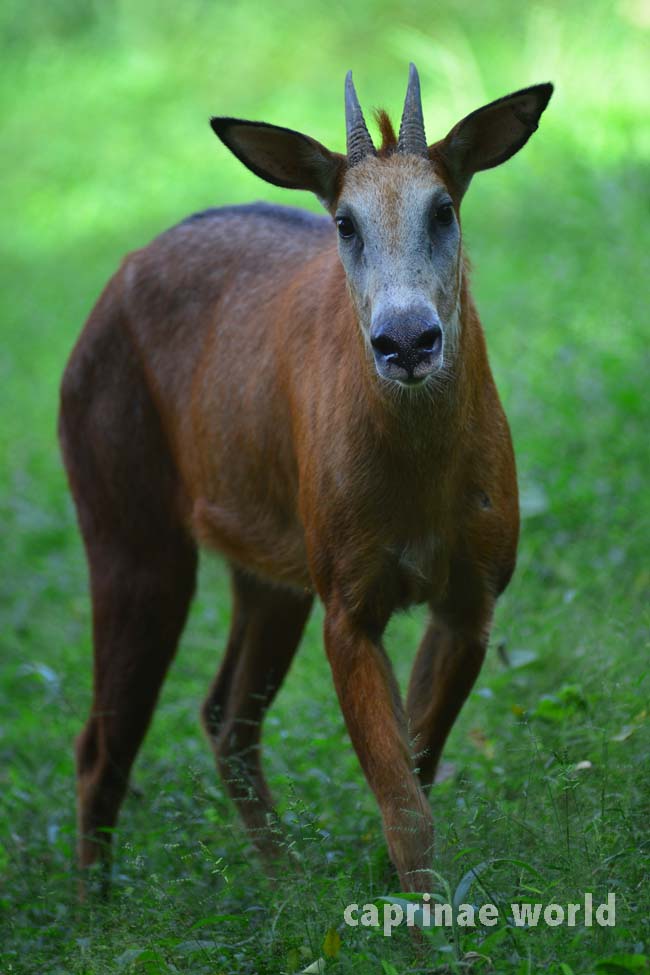 The taxonomy of serows in general is not completely resolved. Descriptions, range maps, and assessments of conservation status in the literature vary because sources differ on nomenclature and specific/subspecific status of the various taxa. (2)

There is two forms of Red Serows: a darker red-colored form and a lighter red-colored. The darker form has a black hair base, the lighter form gets its lighter pelage from hair with a white base. The darker form is sometimes referred to as the „true“ Red Serow or Burmese Red Serow (2), the lighter colored form as the „Assamese Red Serow“. (1) The „Dark Red Serow“ is mainly known from Northern Myanmar, the „Light Red Serow“ from Northeast India and Western Myanmar (Red Serow from Bangladesh are presumably also light-colored). However the type locality of the „true“ Red Serow (dark form) is from the Arakan Hills in Western Myanmar, which is mainly within the range of the Light Red Serow. That is contradictory! 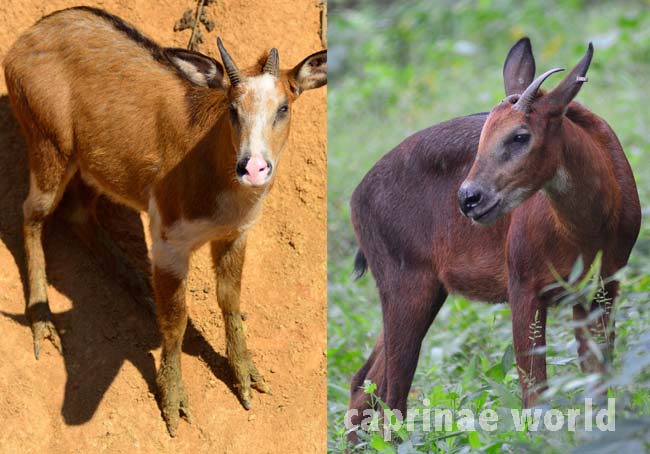 Two „Light Red Serows“: left one in bright sunlight, right one in the shade. This depiction can give an impression of how Light- and Dark Red Serow could differ in pelage color. To date (2017/04) a photo of a live „true“ Burmese Red Serow is not available. 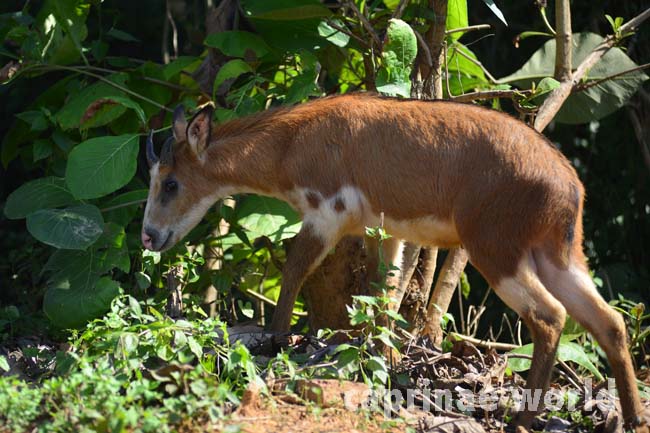 This male „Light Red Serow“ shows unusual white spots. Presumably this can be ascribed to Vitiligo, a long term skin condition characterized by patches of the skin losing their pigment. Photo taken 2016 at Dimapur Zoo, India

The Red Goral is partially found in the same region as the Red Serow, but is smaller and more compact, and lacks the Serow’s neck mane. Gorals also have smaller horns (5), but this feature is probably not well-suited for a distinction in the field. 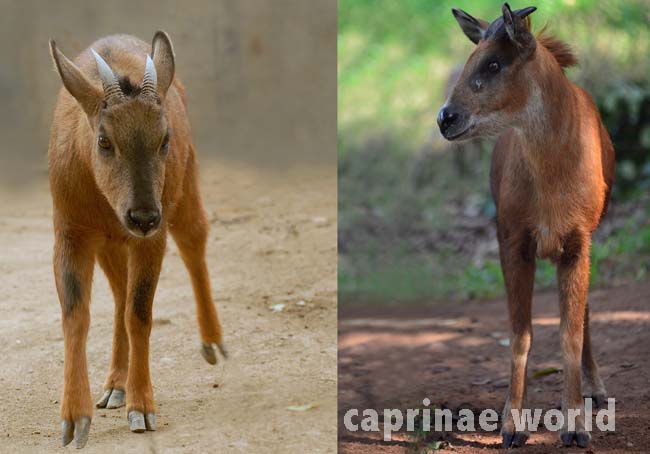 Boundaries of Indian states have shiftet in the past. What was once Assam, is no longer Assam today. Therefore the distribution area of the Light Red Serow is sometimes underestimated. For example the Naga Hill district – with the Naga Hills as one locality, where the Light Red Serow has been confirmed – was made part of Assam province in 1912. Following the Partition of India, it was merged with the Tuensang Division to create the state called Nagaland in 1963. (6) Other areas were renamed as well (see below).

Groves and Grubb (2011) list the following localities for the Assamese / Light Red Serow, some of which have probaly not fully appreciated

The population in Bangladesh (Chittagong Hills) is most likely of the Light Red Serow type. It is supposed to be rare in Bangladesh, and is confined to a few scattered populations east of the Jumuna River in the border regions of Chittagong, Chittagong Hill Tracts, Cox’s Bazar and Sylhet (Khan 1985). (1)

Summary „Distribution Light Red Serow“: The „Assamese Red Serow“ has a much wider distribution than previously assumed. It has been reported from the Indian states of Assam, Arunachal Pradesh, Nagaland, Meghalaya, Mizoram, Tripura, Western Myanmar and probably Bangladesh.

Red Serow also overlap with other serow species/subspecies: U Tun Yin (1967) recorded black serow with red legs (C. milneedwardsii?) from Mogok, Mongmit, Maymyo, and Tharrawaddy. And he has seen black serow with black legs (C. sumatraensis?, C. maritimus?) at Wetwun, Maymyo, and other locations in the N Shan States, Eastern Myanmar. (4) This view is partially confirmed by Duckworth and Than Zaw (2008): The Burmese Red Serow may overlap with C. milneedwardsii which extends through most of the Shan States (Eastern Myanmar) and Pegu (Bago) Yoma (Central Myanmar) at least as far west as the Ayeyarwady river. (2)

pelage characteristics: reddish-brown, short hairs with black hair bases (3). There are variations in some animals, where individuals are darker, almost black, with a reddish tinge. (1)

dorsal stripe: blackish, extends to the tip of the tail (1) 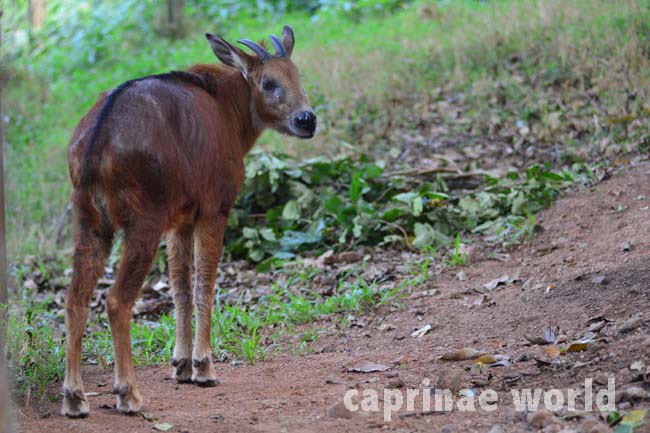 face: has no distinctive markings, but large preorbital glands are present in front of the eyes (5) 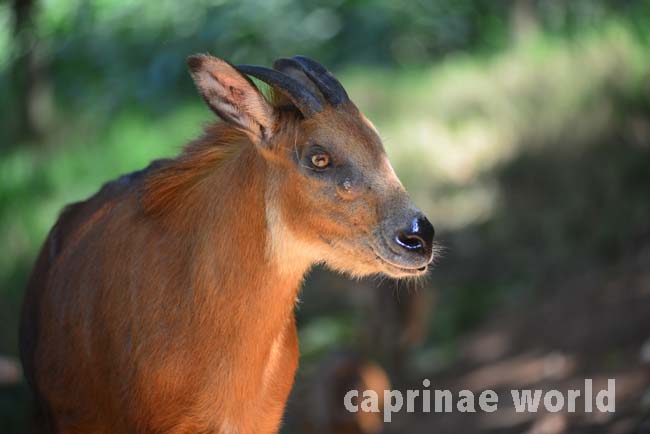 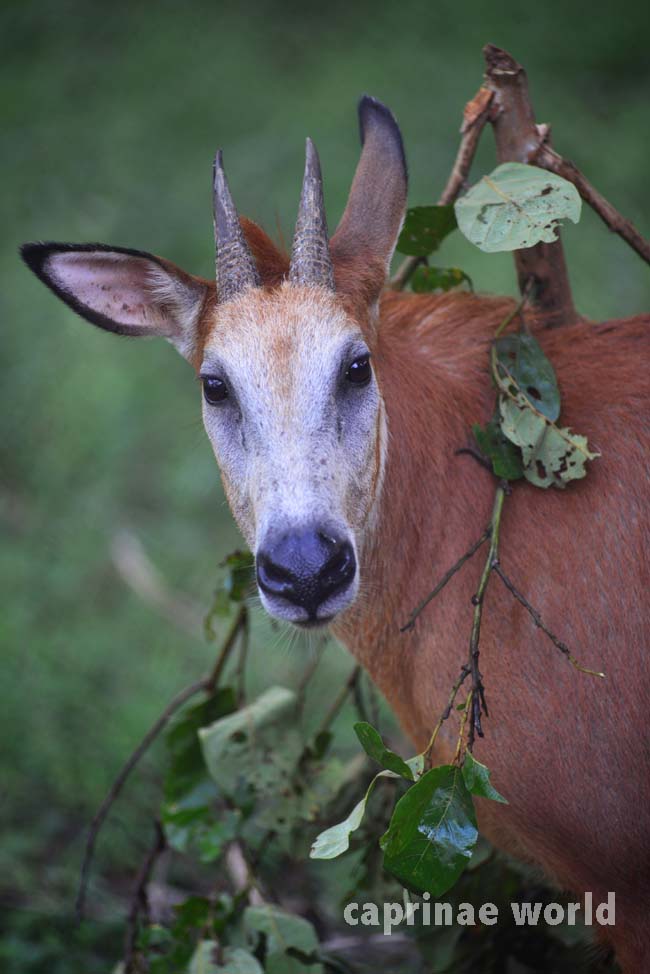 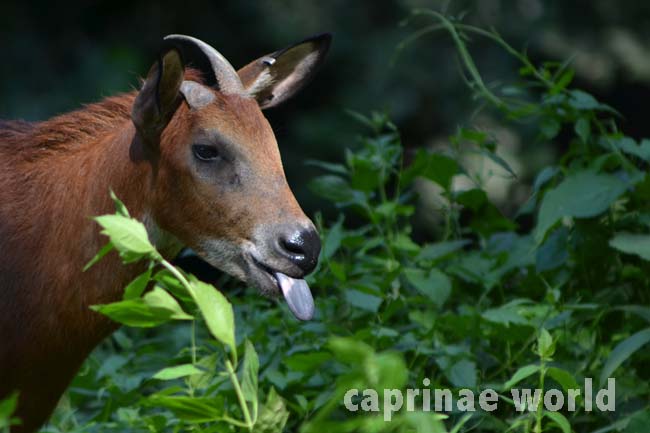 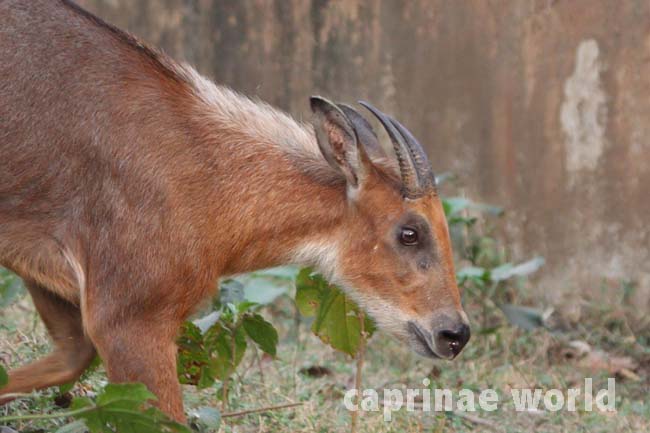 Apparently the „Assamese Red Serow“ also comes with a white mane. However out of seven specimens seen, only one had a white mane. So far I found no evidence that mane color correlates with age. Photo: Brent Huffman – www.ultimateungulate.com 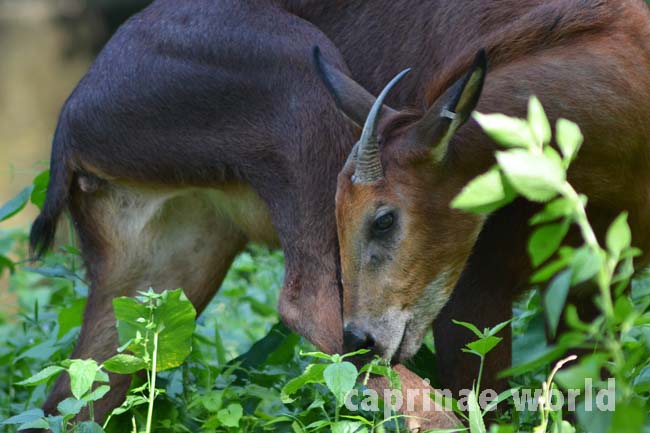 Belly and inner side of thighs are white in this specimens of Assamese Red Serow. 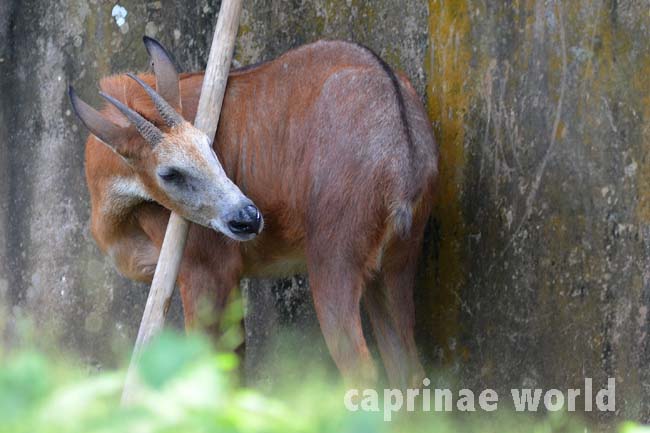 The tail of this specimen is very inconspicuous: short, ending with a grayish tuft. The dorsal stripe terminates at the base of the tail

conical, short, backward-curving; longer and thicker in males (5); show narrow horizontal ridges. It appears that the Red Serow has on average somewhat shorter horns than the Himalayan Serow. Horn length is around 20,3 cm. Lydekker (1913) mentions a head collected in the Arakan Hills of Burma (BMNH Cat. Nr. 12. 10. 31. 36. Skull, with horns. Arakan; collected by J. D. Mercer) as being the record at that time, attaining a length of 21.4 cm and a circumference at base of 12.7 cm. (1) 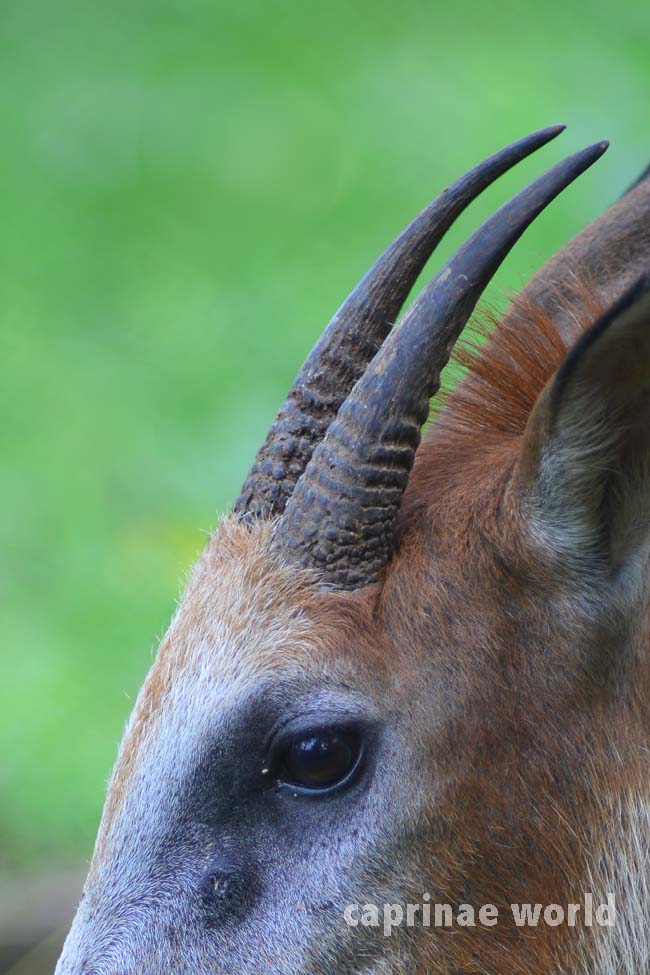 Horizontal ridges are clearly visible in this 2,5-year old, female Assamese Red Serow. However age determination based on the horns seems not possible. 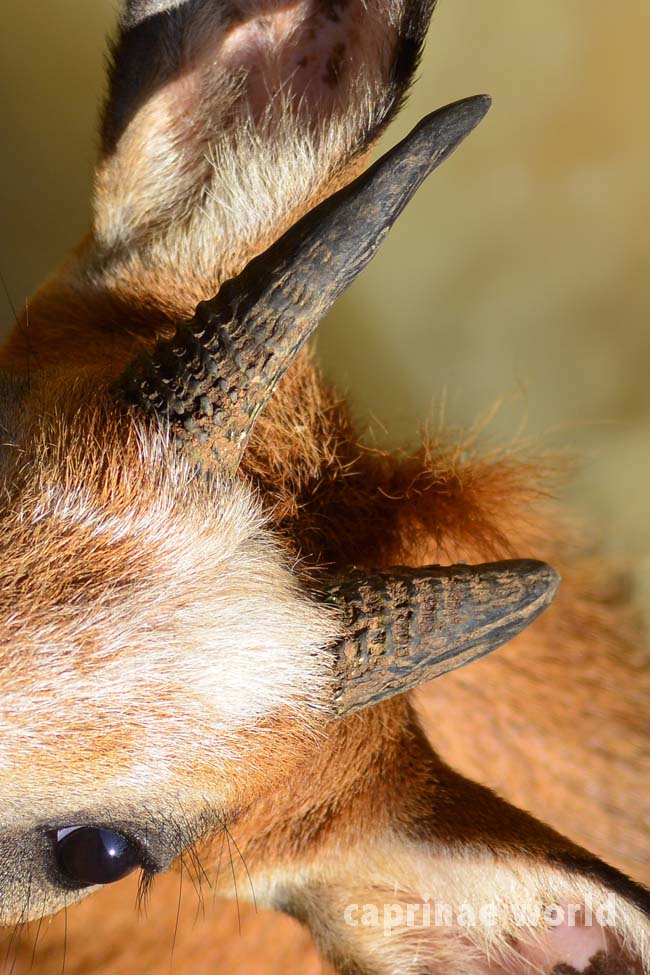 Horns of a male „Light Red Serow“. Horizontal rings at the base of the right horn (left-hand side) partially „dissolve“ to build disconnected rings of lofty dots. 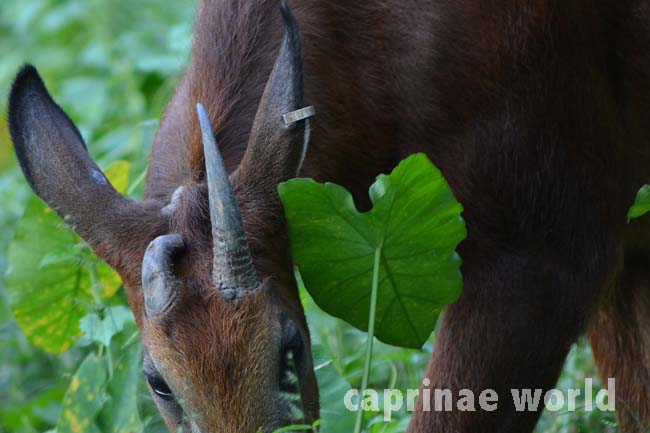 What does a Burmese („Dark“) Red Serow look like?

You still have to wait to find that out!

Nobody really knows how it looks like! There are a few images that you can find in a few books (1, 3, 5) and on the internet, but almost all of them are depicting the so-called „Assamese Red Serow“. There are literally just two photographs taken by Gerald Cubitt, that you find on Arkive or at photoshot.com. The pelage color of the depicted animals is dark reddish-brown. And indeed, a Burmese Red Serow could look like this. But! 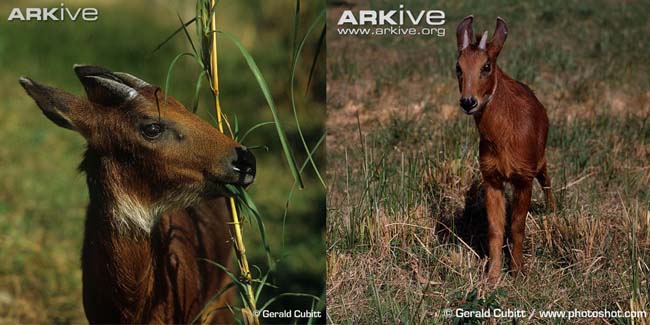 The photos were taken at Manipur Zoological Garden, Imphal, Manipur, India. But there is not a single location known in India, where a „Burmese Red Serow“ specimen has been verified. And it is very unlikely that Maninpur Zoo has imported Red Serows from Myanmar, the only country harbouring Burmese Red Serow. Therefore it is doubtful that the animals at Manipur Zoo were Burmese Red Serow (Manipur Zoo no longer keeps Red Serow. Dominique Brugiere: pers. comm., 2017/04). Hence, the world still has to wait for somebody to take the first photograph of a „true“ Burmese Red Serow! 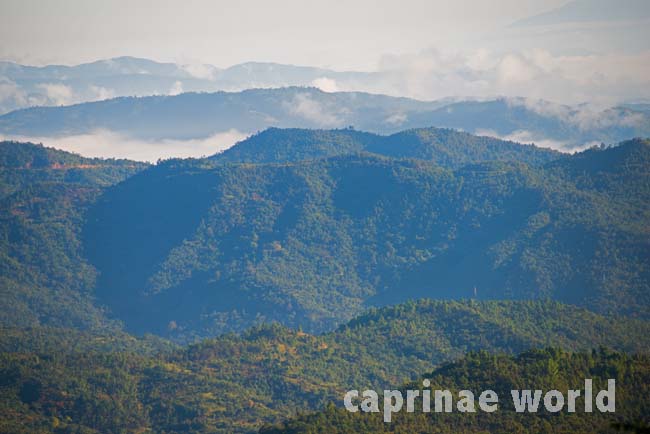 View from a road near Dimapur, Northeastern India, looking towards the border with Myanmar. There are still large tracts of forests. However many people inhabit these forests who depend on its resources – including serows. 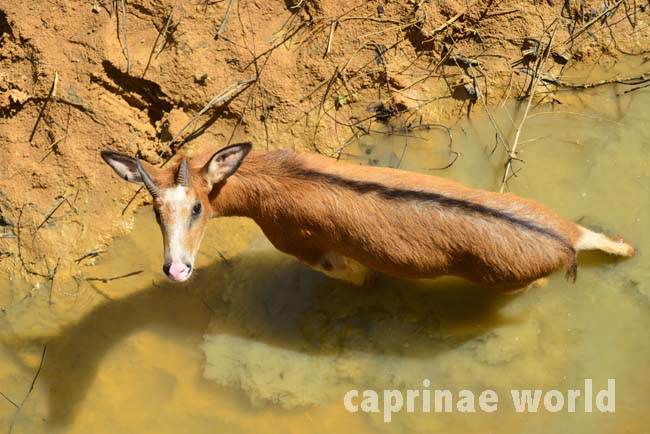 no published information available, but probably browse is a major component of the diet (3) 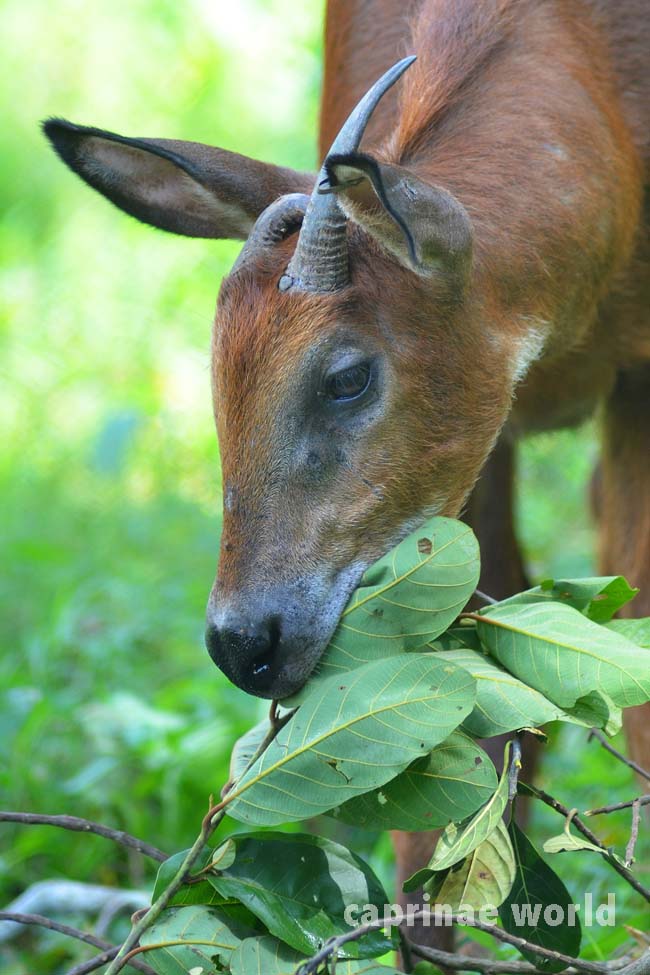 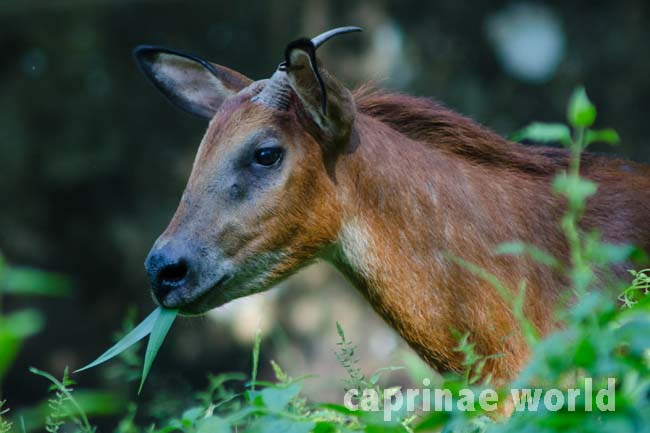 Assamese Red Serow feeding on grass. The animal is a 2,5 year old female from Guwahati Zoo. 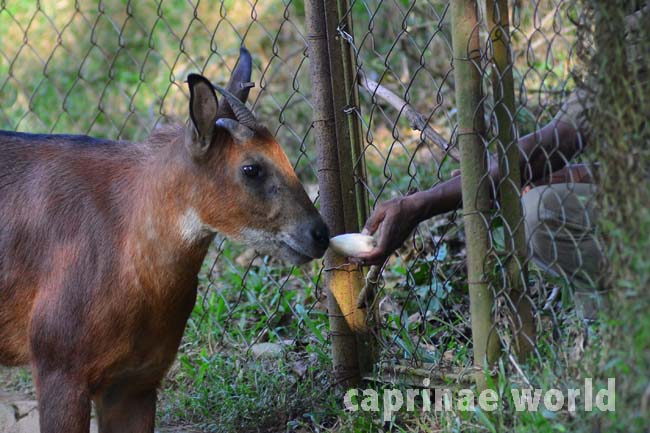 Assamese Red Serow being hand-fed with banana. Animal is a 2,5 year old female from Guwahati Zoo.

no information available, but probably similar to other serows, with a gestation of about 210 days, followed by birth of a single young, rarely twins. (3)

no information available, but other serows are most active at dawn and dusk, and spend the rest of the day in thick vegetation. (3) 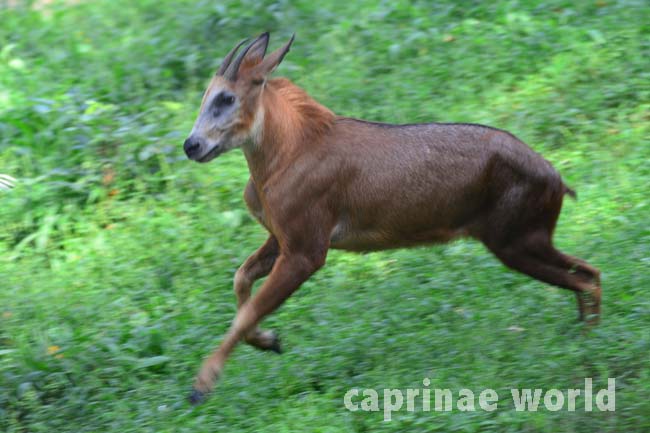 Derived from their natural habitat in dense subtropical and tropical forests it can probably be assumed that Red Serows are no endurance runners. If startled they are agile animals.

no information available, but related serows are territorial, typically moving along beaten paths that they create through their territories. (3) 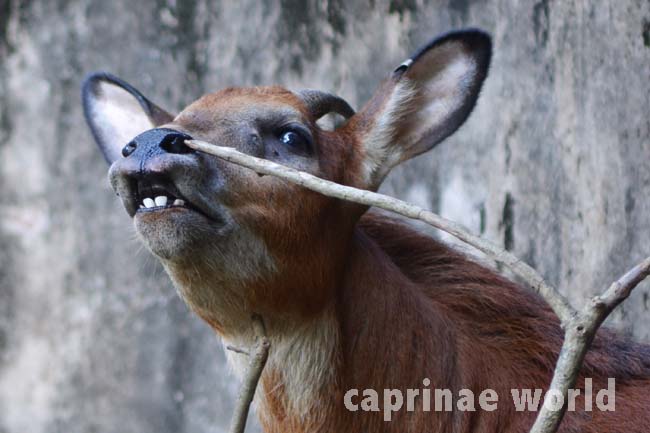 2,5-year old female Assamese Serow sniffing the end of a dead branch that could have been marked by a conspecific. Olfactory communication is known to play an important role in both sexes of the Japanese Serow. Most likely it is important for Red Serows as well.

Classified as „Near Threatened“ on the IUCN Red List. (2).

This Red List assessment is based on the best available information – which is not much. Therefore it contains considerable uncertainty. However, the species is probably declining due to over-hunting, like Capricornis milneedwardsi, probably at a rate of less than 30 percent over three generations, taken at 21 years. The true status of the species may be better or worse than this. (2)

The threats to this species are not known, but there is significant hunting of other large mammals in the area. The serow in Myanmar is one of the most heavily traded species in the local trade. Every market surveyed by TRAFFIC in Myanmar in 2006 had Serow, and in most markets, this was the most commonly observed species, with the bulk of the parts observed being horns and heads. Many of these markets are situated on the Myanmar-Thailand border and dealers claim that all buyers in these border markets come from Thailand, indicating a blatant disregard for both national legislation and CITES. Serows are protected throughout Southeast Asia by law, but protecting this species on the ground does not appear to be a priority in many countries.

Serow are very heavily hunted in Myanmar, with meat usually being consumed locally, but parts, including the forelegs, heads, horns and fat from the stomach region being the most sought after for use in traditional medicines. These parts are rendered down and the oil is sold in small bottles. According to dealers, this oil is applied externally to treat skin ailments and joint problems. Horn tips are also exported from Myanmar to Thailand to be attached to the spurs of fighting cocks (this is believed to give them more power). 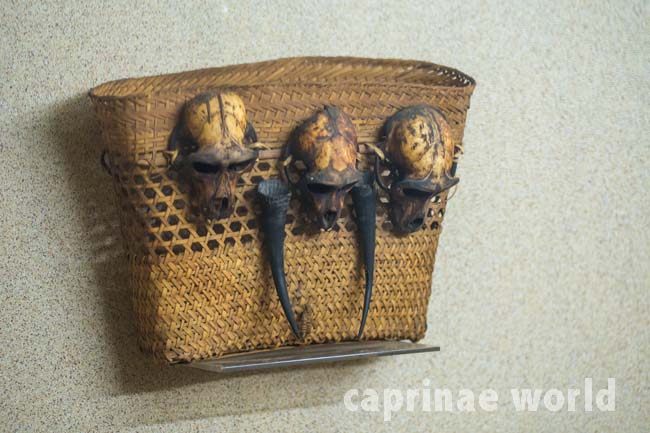 In 2006, interviews with dealers in border markets and markets in the centre of Myanmar, revealed that in all areas surveyed, Serow are apparently in decline. Hunters stated that they were having to travel further to get serow, and that they were, in many locations, becoming scarce.

There is an urgent need to survey this species‘ habitat to determine the range limits, population, and threats. Measures also need to be enacted to prevent hunting of the species. It is expected to occur in several protected areas, but this requires confirmation. (2)

does not take place 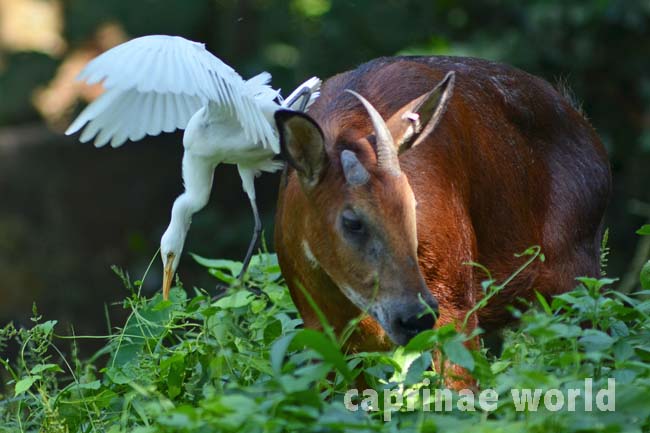 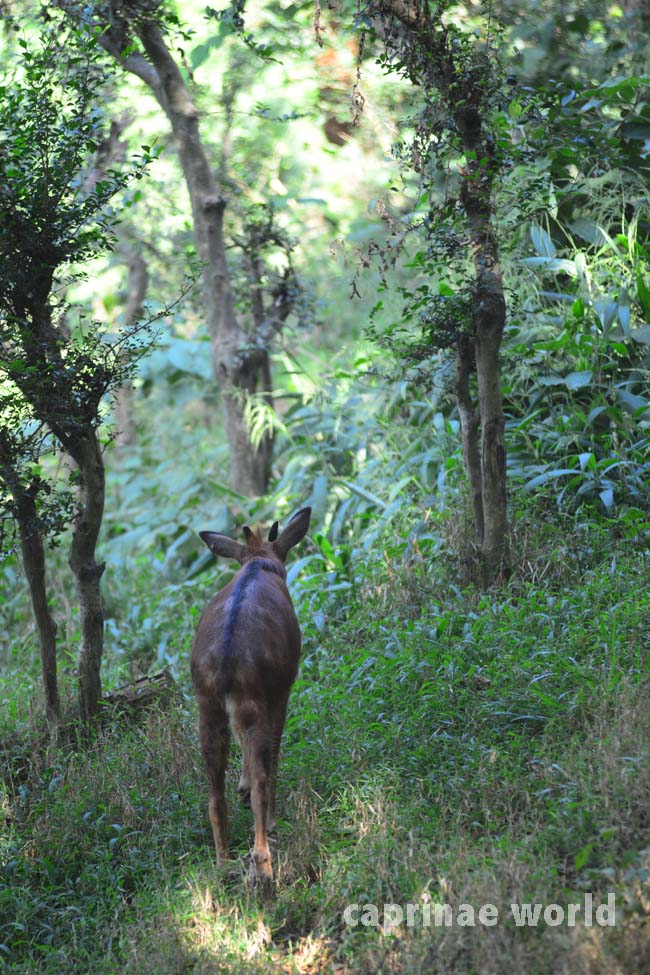