The Taiwan serow is the smallest member of the genus Capricornis and an endemite of the main island of Taiwan.

The Taiwan Serow is closely related to the Japanese Serow (C. crispus), but molecular genetic data indicate C. swinhoei is a seperate species. There are also morphological differences: For example cheekteeth are smaller in the Taiwan Serow. [4] Monotipic. [3]

In the wild, no similar species share the range of the Taiwan Serow. The closely related Japanese Serow (C. crispus) is much shaggier and has a larger body size and shorter ears. All other serow species are much larger and have a shaggy mane on the nape of the neck. Gorals (Nemorhaedus sp.) also have a light throat bib, but are generally grayer. [5] Only the Himalayan Brown Goral is similarly rich brown in color. Unlike the Taiwan Serow, gorals do not have visible preorbital glands in front of their eyes. [5]

endemic to Taiwan; widely distributed in the mountainous regions throughout the island. [2]; rather in the eastern and central parts of the island 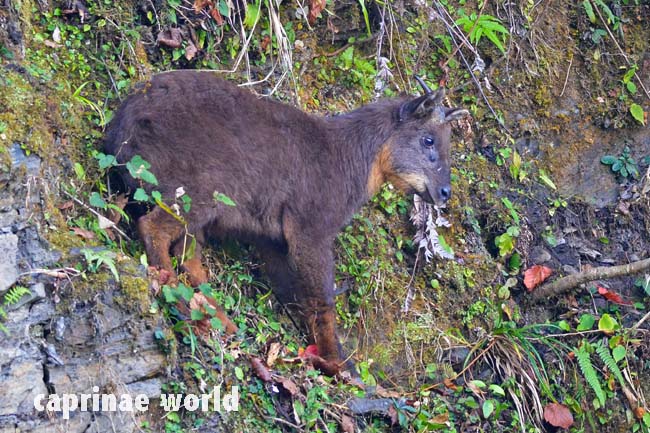 The Taiwan Serow is the smallest of the serow species. Photo: Jon Lehmberg, Dasyueshan, Taiwan, 2019-01

markings on head: face grey-brown [4]; chin, throat, and posterior jaw pale yellowish to reddish brown [3]; black and yellow markings on the chin, throat and neck, with a large square throat-bib just under the jowls [1]; black zone in the interramal space [4] 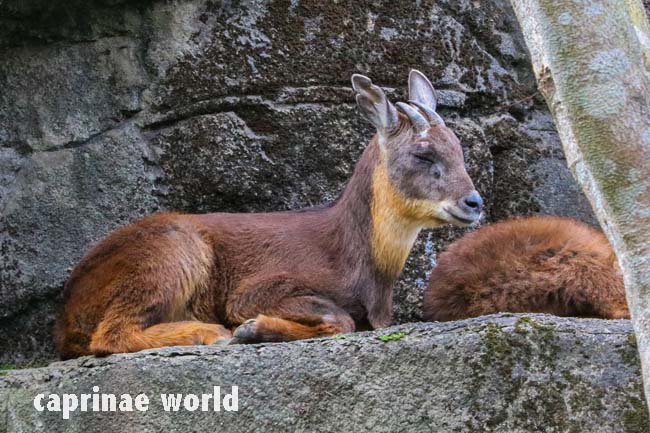 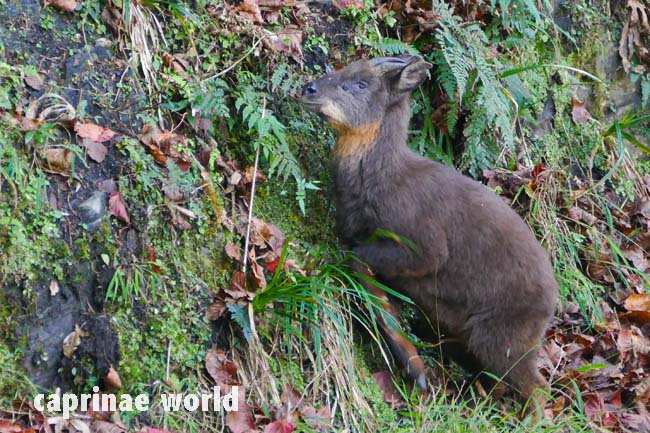 In this male pelage of lower mandible and throat is bicoloured. Photo: Stig Jensen, Dasyueshan, Taiwan, 2019-01

pelage characteristics: short, soft and curly; not as bushy as the Japanese Serow [1]; Groves and Grubb (2011) find it rather thick and coarse with much woolly underfur. [4]

undersite: slightly lighter, with a reddish tinge in the middle; hinter part of the belly creamy, sometimes suffused with red, going halfway down the inside of the thighs [4] 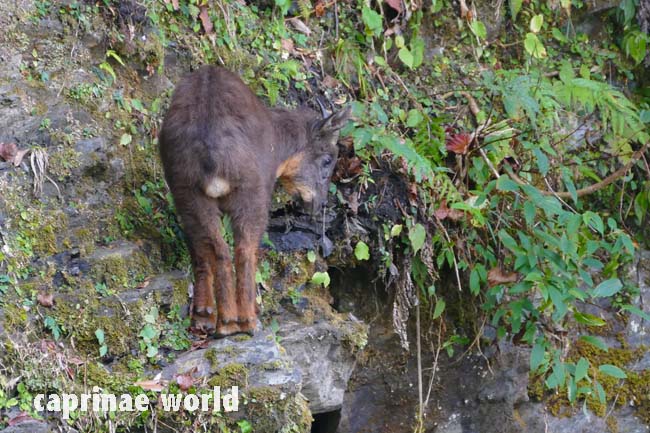 legs: noticeably darker than body [3]; front of the legs, from the „knee“ and the hock to the hoof, brown or black, this area becoming broader near the hoof; reddish brown at the back of the legs. [4] 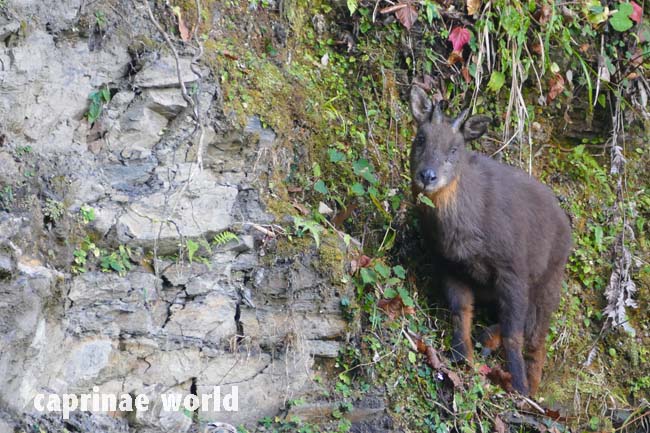 Taiwan Serow male. Front of limbs are markedly darker than other parts of the pelage. Photo: Stig Jensen, Dasyueshan, Taiwan, 2019-01 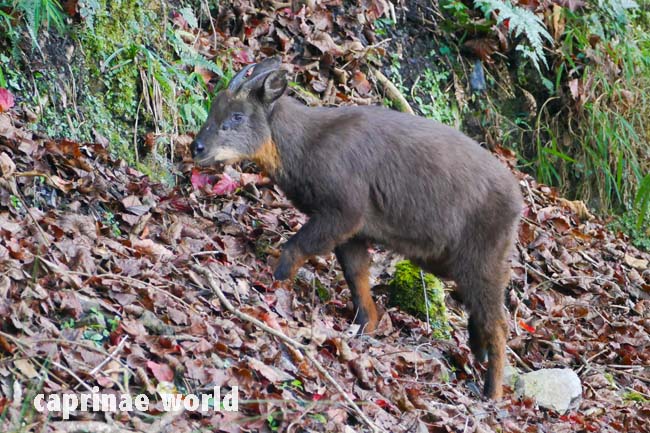 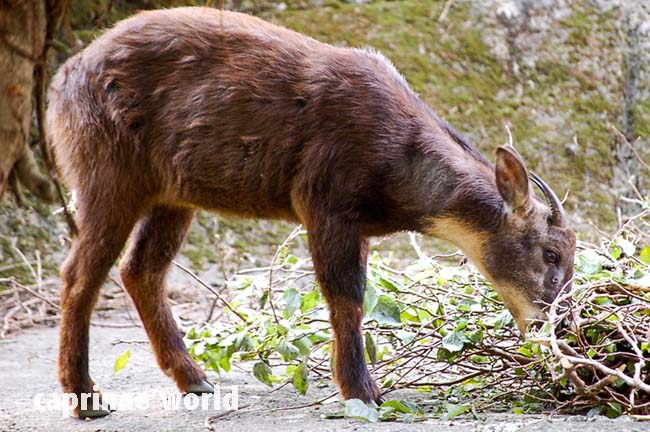 The horns are arched anteroposteriorly, and horn sheaths have a series of transverse rings. Horn length data of Damm, and Franco, 2014 [1] and Wilson and Mittermeier, 2011 [3] is rather contradicting: 7,4-11,2 cm [1] and 15-26 cm [3]. The authors agree in that the Taiwan Serow’s horns are shorter than those of the Japanese Serow.

Little sexual dimorphism is shown and males and females have horns of similar size. Horns of adult males show greater wear than those of females and the grooves of annual rings are more distict in females. The horn formation and wear gives indication of age. Indicators include size, curvature, thickness of transverse horn rings and number of transerse rings. Horns begin to develop at about four months. As adulthood is reached, the thicker transverse rings are forced upward by development of thinner horn rings at the base, and the size of annual growth increments relative to age decreases. [1] 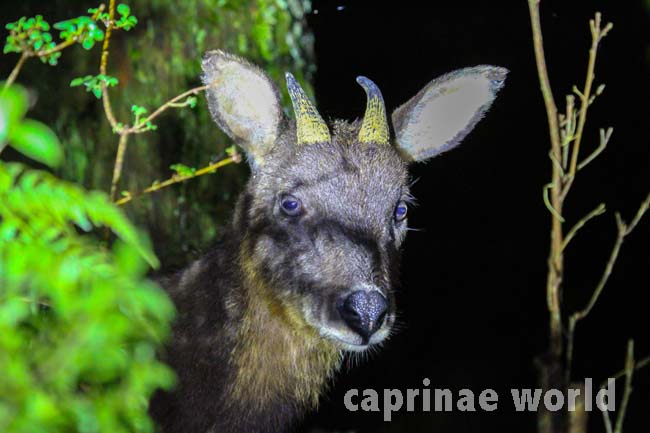 Taiwan Serow male. Note the broad base of the horns. Photo: Vince Kinsler

Taiwan Serow male. Note the wartlike nodules on the base of the right horn. Photo: Stig Jensen, Dasyueshan, Taiwan, 2019-01 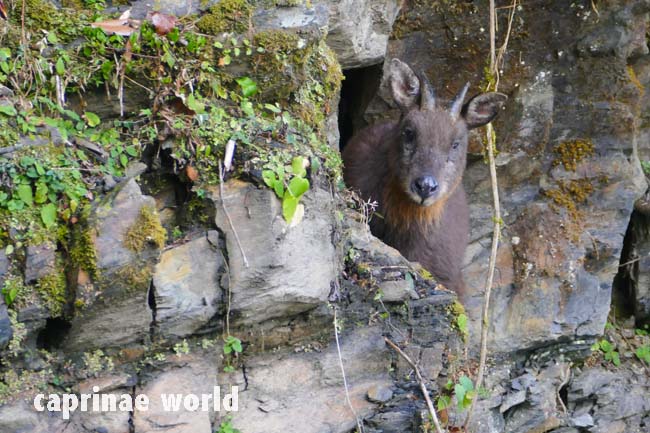 Taiwan Serows are adapted to steep and rugged terrain and may use steep and craggy rock faces and cliffs to avoid predators. Since rugged terrain is available independently from elevation, serows occur within a great altitudinal range, from 50 to 3.900 metres, just below the peak of Yu-shan, the highest mountain in the country [2]. Other authers have indicated slightly different figures: 200 to 3.870 m [1, 3]. This altitudinal range is greater than that of the Japanese Serow. [1] Most populations seem to occupy areas higher than 1000 m because of human encroachment [2, 3]. Despite the fact that environmental conditions usually deteriorate with height, populations of Taiwan Serow can be high at high altitudes, particularly in remote areas or in the vicinity of cliffs. [2]

At lower altitudes the Taiwan Serow seems to be even more dependent on areas close to ridges and cliffs. [2] 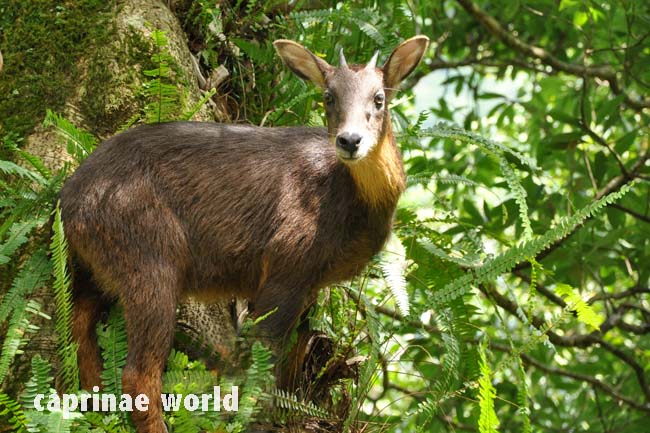 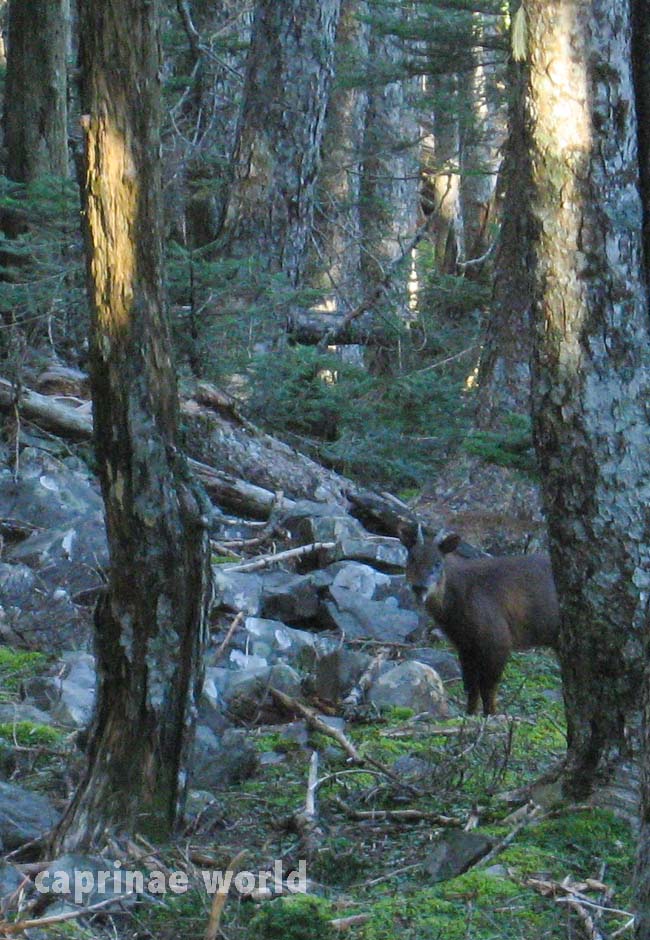 … to oldgrowth coniferous forests and even alpine areas. Photo: Timogan 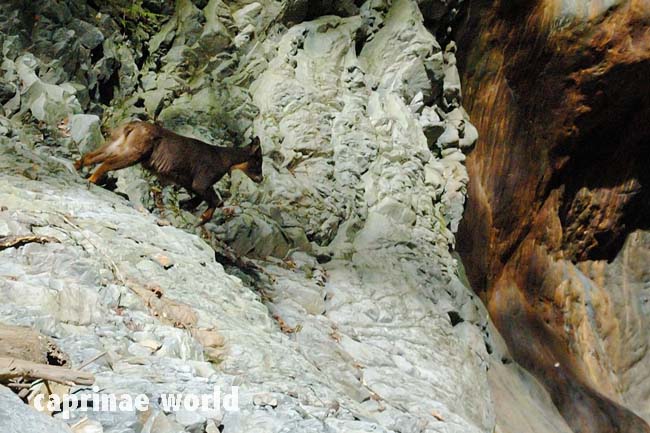 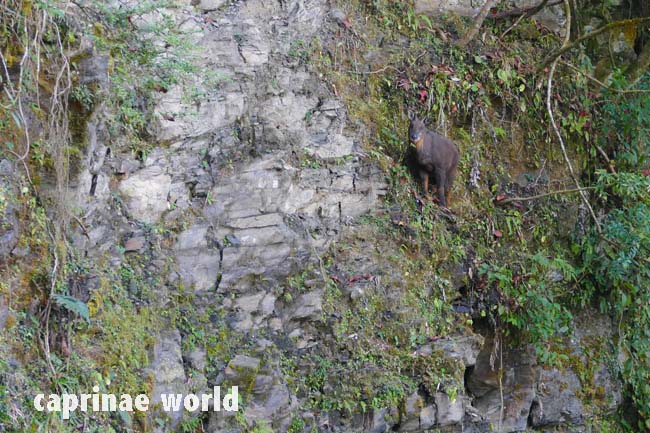 Taiwan Serow in its habitat at Dasyueshan. Photo: Stig Jensen, 2019-01 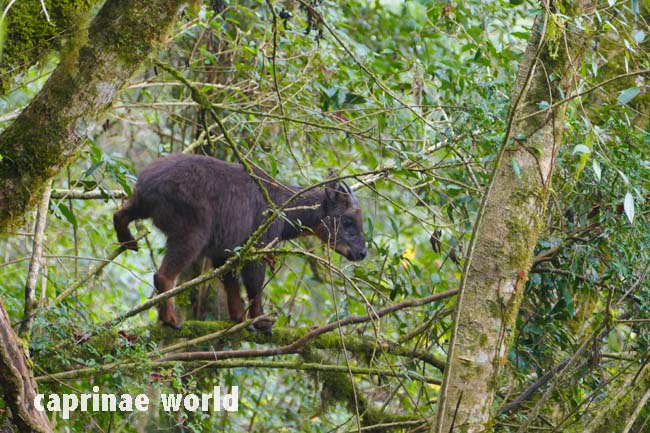 Because of the great altitudinal range of the Taiwan Serow, the species lives in a wide varity of mountainous habitats, from lowland tropical and subtropical rainforests, mixed broadleaf-conifer forests and warm temperate rainforests at mid-altitudes, to coniferous forests, alpine meadow, and tundra at the highest altitude range. [2]

Mortality related to skin parasites has been reported. [2] The Formosan Clouded Leopard (Neofelis nebulosa brachyura) apparently preyed on Taiwan Serows. [5] This species is believed to be extinct now. 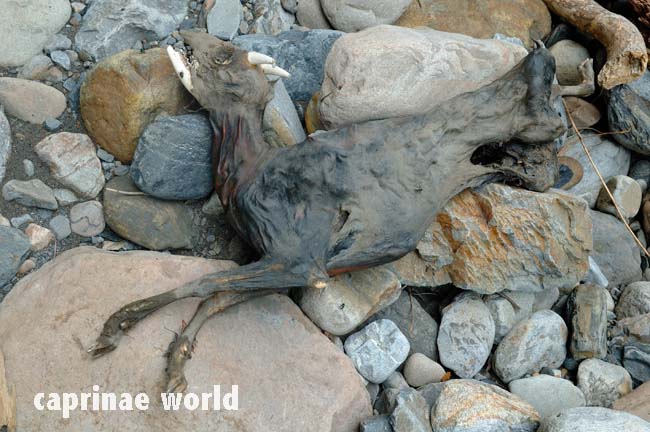 Taiwan Serow carcass – cause of death unknown. As for all climbing caprinae species falls are a possible cause of death. Photo: Yunghui Hsu at Xueshan Main Peak, westside, 1400 m asl

The Taiwan Serow is „principally a browser“ [3] or an „intermediate feeder“ – between selective browser and roughage eater. [1] Taiwan serows feed on grasses, shrubs, browse, young twigs, some fruits, and even juvenile parts of conifers.

Analysis of relationships between forest structures and occurrence frequencies suggested that Taiwan Serows may prefer disturbed and early-succession forests with gaps where they find grass and shrubs to browse. [2]

The Taiwan Serow is diurnal and nocturnal, but principally dirurnal [3] – at least in areas with least human activities. [2] It is most active during the 3 hours after sunrise and during the 4 hours before sunset (but lower activity levels than in the morning). Seasonal variations of activity levels were more pronounced in the afternoon. However, Taiwan serow could become more nocturnal in areas close to human activities. [2] 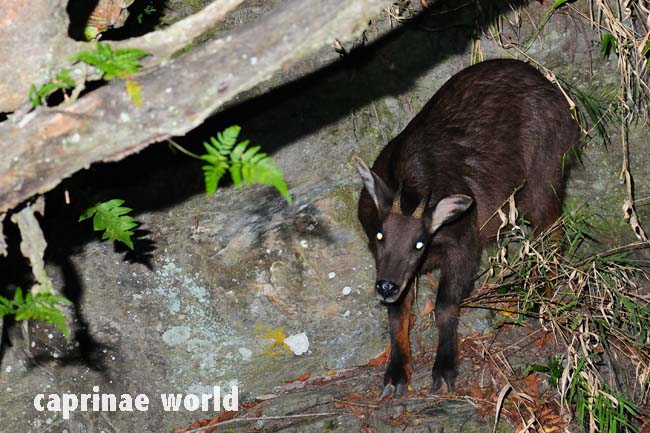 The social system of the Taiwann Serow is probably similar to those of the Japanese Serow, which is basically solitary or found in small groups of up to four individuals. [3] Up to eight animals have been maintained in captive groups. [2]

The Taiwan Serow scent-marks with preorbital glands [2, 3] and has localized dung sites. [2] Male home ranges may overlap with one or two females. [1]

An average density of 22 serows/km² was estimated in part of high altitudes of Yu-shan National Park. [2]

Young Taiwan serows were observed to follow their mothers with occasional hiding behaviour suggesting a follower type. In the wild, young serows had also been photographed by camera traps to follow their parents in spring and fall. [2]

Habitat segregation was found between Taiwan Serow, Sambar Deer (Cervus unicolor swinhoei) and Reeve’s Muntjac (Muntiacus reevesi micrurus). There may be competition in the wild with these species, though the effects of these interactions require further research. [2]

The Taiwan Serow is classified as „Least Concern“ on the IUCN Red List. [2]

Greatest concern is the continued degradation and fragmentation of native forests, and agricultural encroachment and related human activities. [3] In addition, heavy poaching pressure over the past decades may have caused the population to decline. [2]

In the past, wildlife was a source of food for the local indigenous people in Taiwan. Because of the growth in the livestock industry over the past 40 years in Taiwan, food from wildlife is becoming less and less important and hunting serow is now banned throughout Taiwan.

However, wild meat is still preferred over livestock meat in certain situations such as ceremonies or gifts. Better economic conditions may also increase the demand for wild meat. Wild meat is still taken through illegal hunting and poaching seems to have increased in recent years, partially because the immigration of foreign workers into Taiwan have caused unemployment among the indigenous people, who have returned to their villages and now practice hunting for a living.

Nevertheless, current poaching pressure still seems lower compared to several decades ago. It is unknown whether current hunting pressure has a significant adverse effects on serow populations. In addition, forestry, agricultural, road construction activities in the mountainous regions have encroached upon the virgin forests originally inhabited by serow.

The latest possible threat to serow comes from increasing recreational and tourist pressures, but the impact is unknown.

Serow populations may be increasing in recent years. Casual observations by park rangers, hikers and wildlife researchers suggest this. However, this impression might be confounded because more people are now involved in outdoor activities. More sightings of serow may lead to a biased impression of increasing populations. Population trends need further research.

Serow is protected in National Parks and in Nature Reserves. Recently, through the development of environmental-protection awareness and enforcement of related wildlife protection laws, conditions for serow have improved. [2]

Since 1989, the Taiwan serow has been listed as a “Precious and Rare species” under Taiwan’s Wildlife Protection Act, and hunting the species is prohibited. [2]

Taiwan Serow watching is not yet considerable, but people do go. There are few reports of people on mammalwatching.com observing serow on the island.

John Wright from the UK reports to have seen 8 serows on a 2,5 hour night drive through Dasyueshan Forest Reserve (east of Fengyuan and Taichung) on July 2016.

Dominique Brugiere from France also visited Dasyueshan Forest in the second half of April in 2016. He saw a total of 13 serows in four days and nights, „mostly at night“, spotlighting along the road.

Bob Hawley (pers. comm.) says „if people want to go out at night looking for serows, then they might find some“, although they can be tricky to see as they’re often on wooded slopes. His experience is that the serows he saw at night did not seem too be perturbed by his presence. He thinks that might be due to low hunting pressure in the parks, and because of the presence of tourists and park workers. 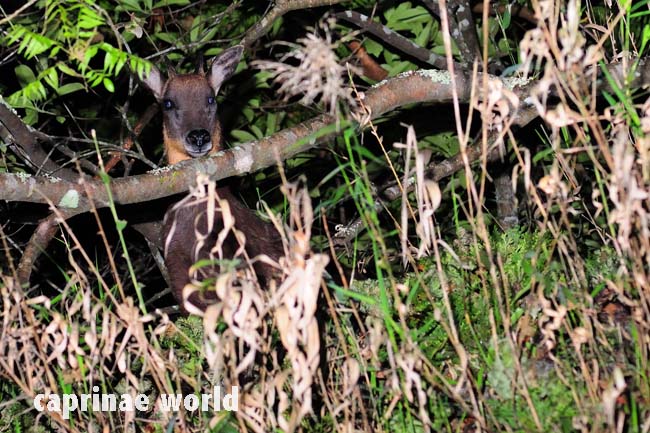 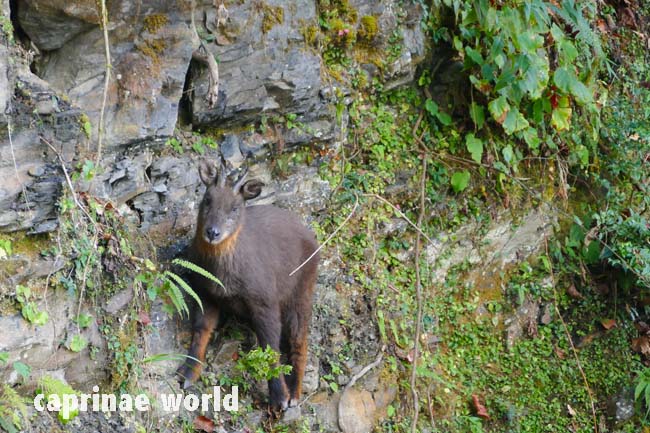 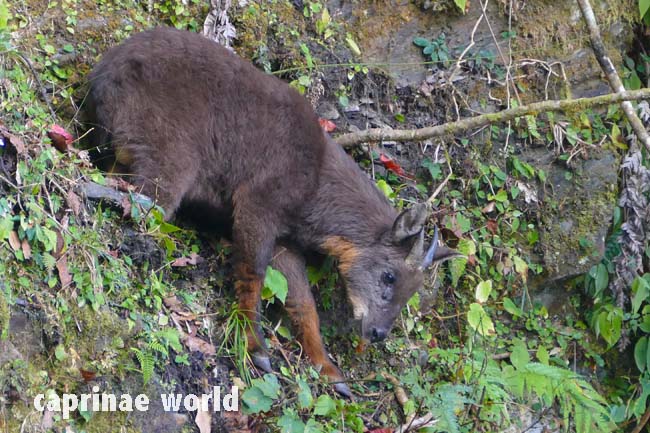 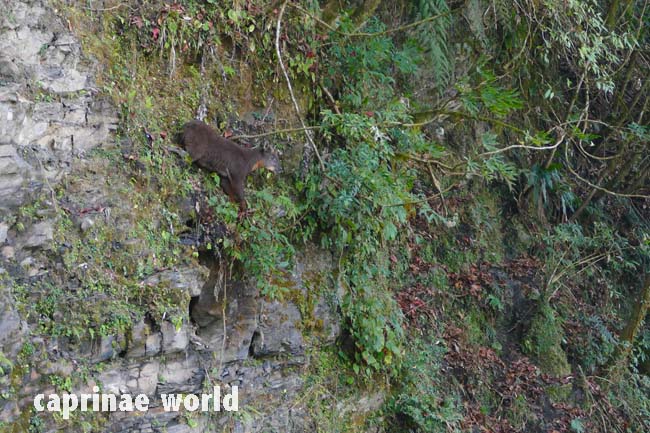 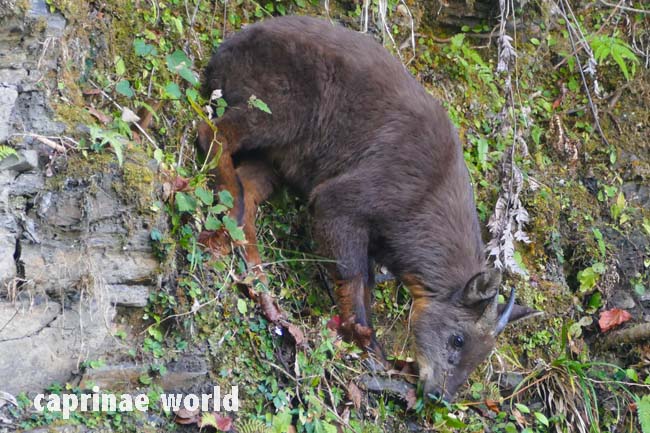