I visited Dovrefjell–Sunndalsfjella National Park from June 11th to June 17th. The area is considered the last highland wilderness of Europe, where one can observe free ranging Reindeer, Muskoxen, Wolverine and Polar Fox.

About the area: According to Wikipedia the park was established in 2002 to replace and enlarge the former Dovrefjell National Park, established in 1974. According to local information boards parts of this region were used as a firing range by the Norwegian army. In 2008, the last bombshell was dropped on Hjerkinn, and the 165 km² artillery range is now being reclaimed by nature.

Mining took also place. The Tverrfjellet mine closed down in 1993. 400 people worked here, and a total of 15 million tons of ore were taken out. Unbelievable how busy this place must have been, and how they turned the place – and still working on it – to let it become a wilderness again. According to a local I met, the national park authorities even plan to remove houses, a 100 years old, that can be seen from Snøhetta viewpoint. For wilderness lovers this is very good news indeed. 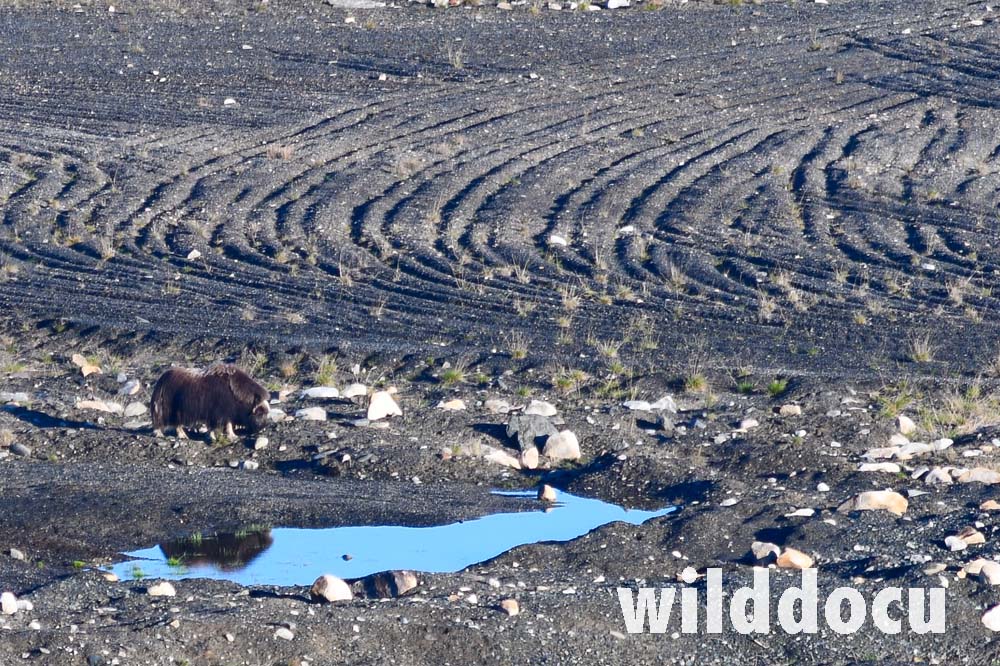 A Muskox in a former firing range below Snøhetta viewpoint. The removal of bombsheels has left behind furrows in the soil, that are still visible.

We travelled with public transport, were therefore limited in our mobility and visited mainly the Hjerkinn area of Dovrefjell. We hiked, rented bikes and horses to explore the area. One afternoon we got a ride to Fokstumyra Nature Reserve (see more infos below).

A good introduction to the park is a visit of the Snøhetta viewpoint near Hjerkinn. A gravel road leads to a parking lot. From there its an easy 1,5 km uphill walk.

There are only a few gravel roads leading into the park. Cars are not allowed. During the summer a shuttle bus is in operation. In my opinion it is a good choice to go by bike first to get away from highway E6 and the settlements and then walk. (Note: bikes are not allowed between 16.7.-31.5.) Hiking gravel roads is not my cup of tea. A great advantage of travelling in June is that your days never end. Dovrefjell is situated on the 62. latitude; that means you can enjoy 24 hours daylight. 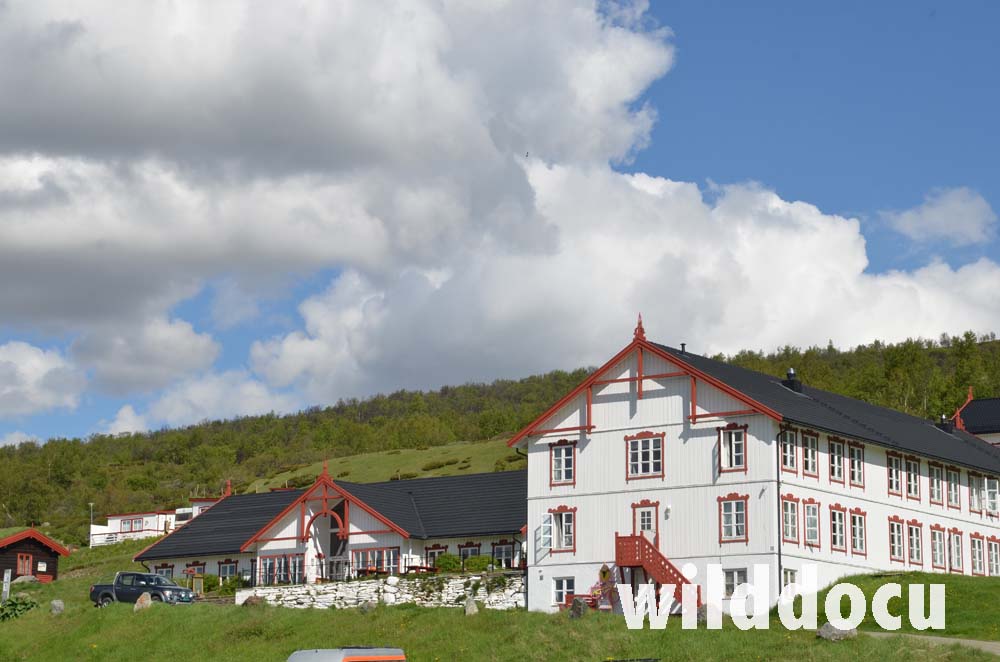 Hjerkinn Fjellstue: according to the owners the oldest family business in Norway 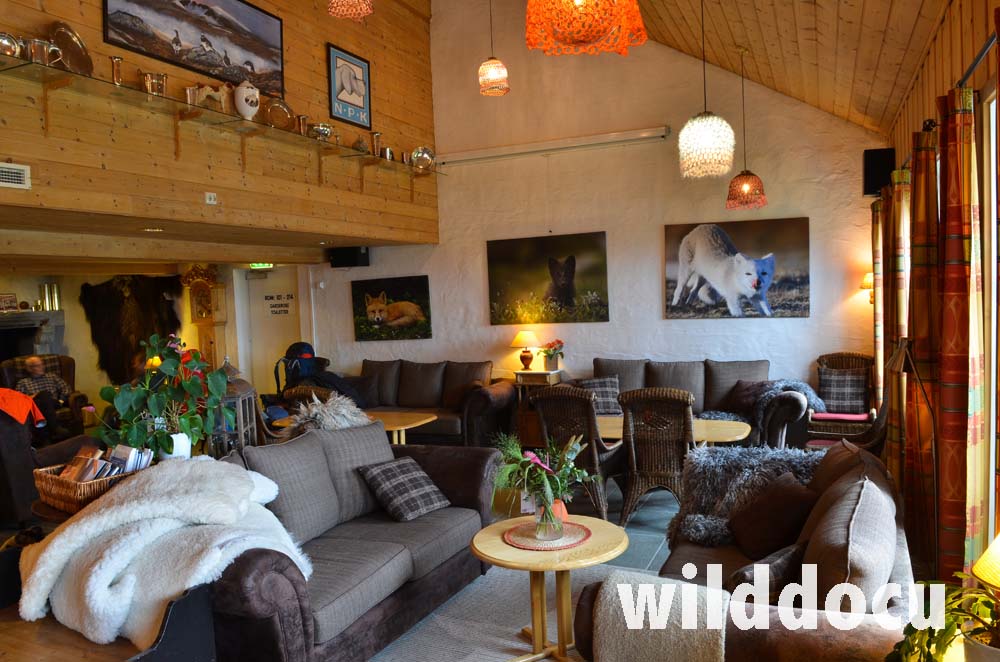 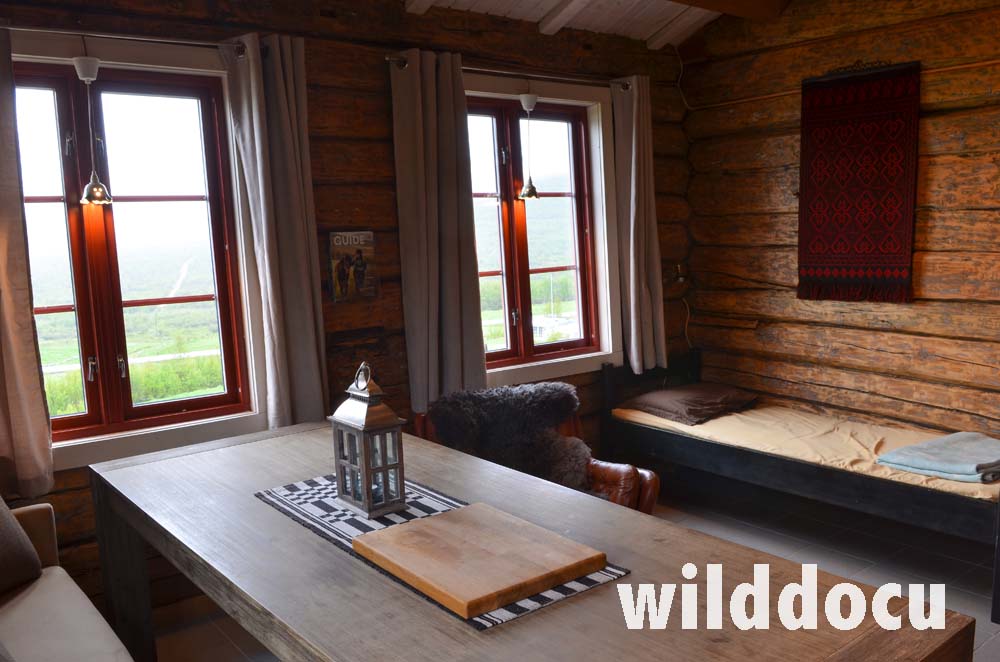 Interior of the pilgrim hut: simple, but tasteful. You can stay here for less, when you come to Hjerkinn Fjellstue on foot.

Muskox (Ovibos moschatus) – my main target species: 135 animals have been counted in 2003 in the Dovrefjell highlands according to an information board. The population is based on several reintroductions between 1932 and 1953. According to our host Martin Hjerkinn there is a 95-per-cent-probability to see one of these outstanding beasts.

Park officials explained the muskox is a „peaceful plant eater“, but it „may attack in order to defend itself“. They recommend to keep a distance of „at least 200 metres“. In the tundra it is usually not a problem to spot the animals early enough. Be careful in willow thickets. Muskoxen have massive heads, but there shoulder hump reaches only up to a man’s breast. So if they are laid down, they can virtually vanish in thin air between the bushes. 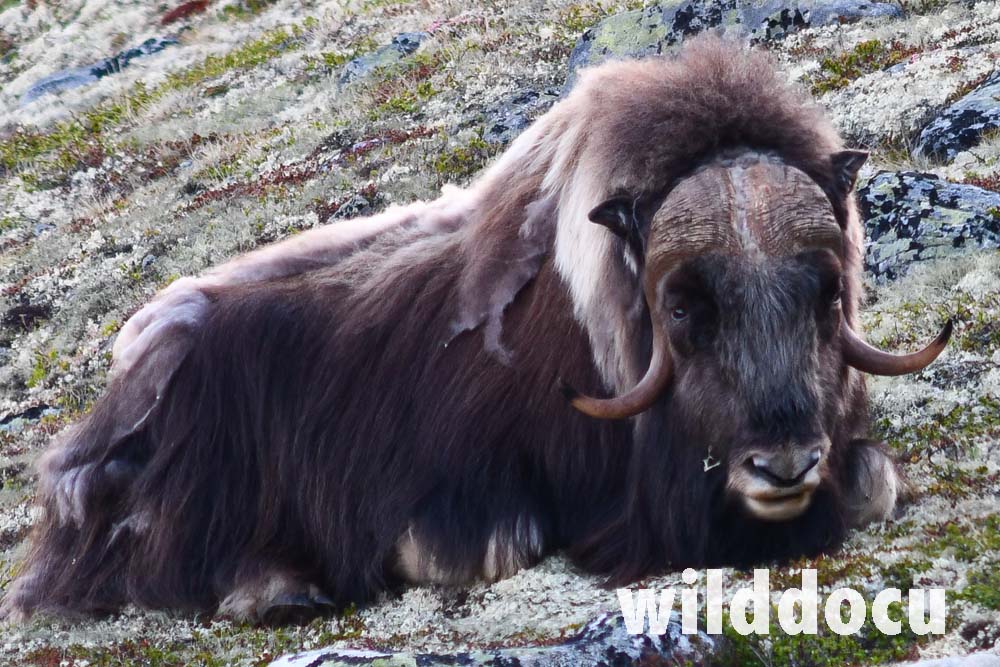 A bull, I met three o clock in the morning. He was not really in the mood to pose for photos and went around the next ridge to continue his sleep. 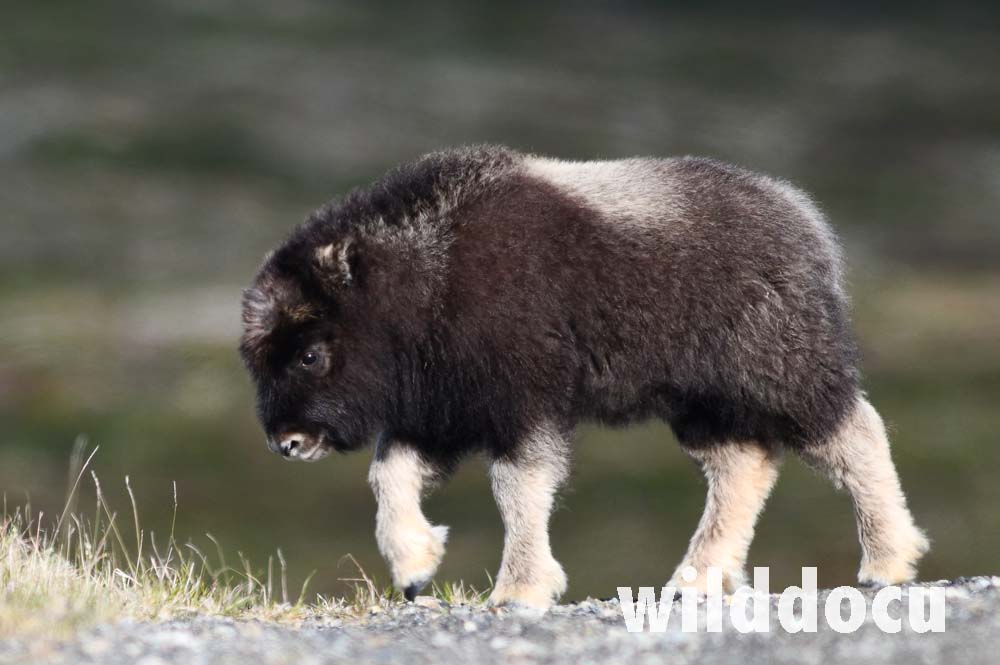 Really cute: young of the year 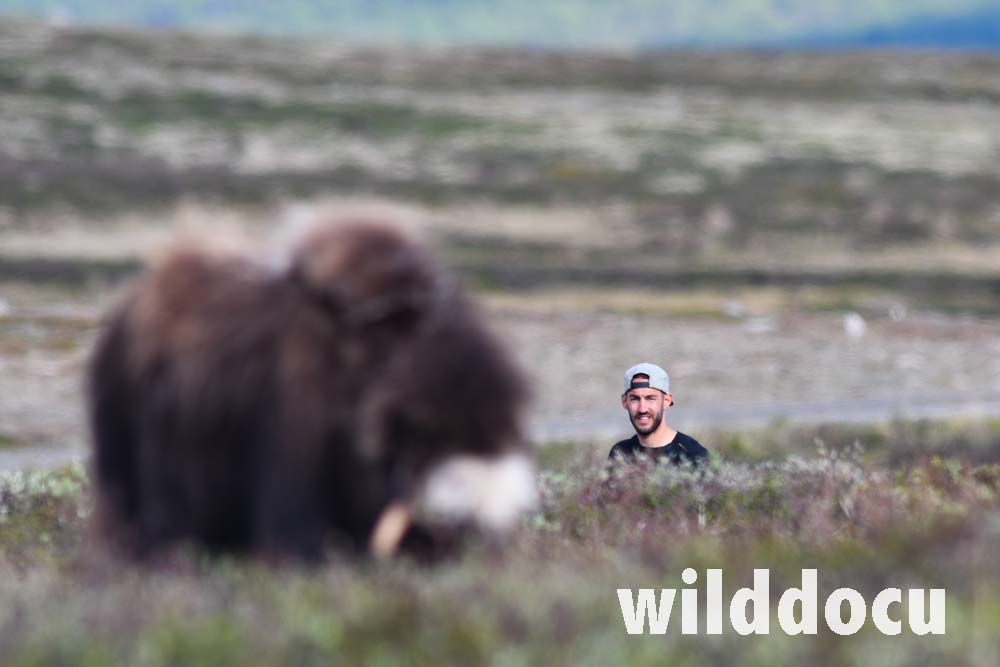 A fellow traveller I met. A Muskox on the road between us. Eventually we had to circumnavigate the beast. 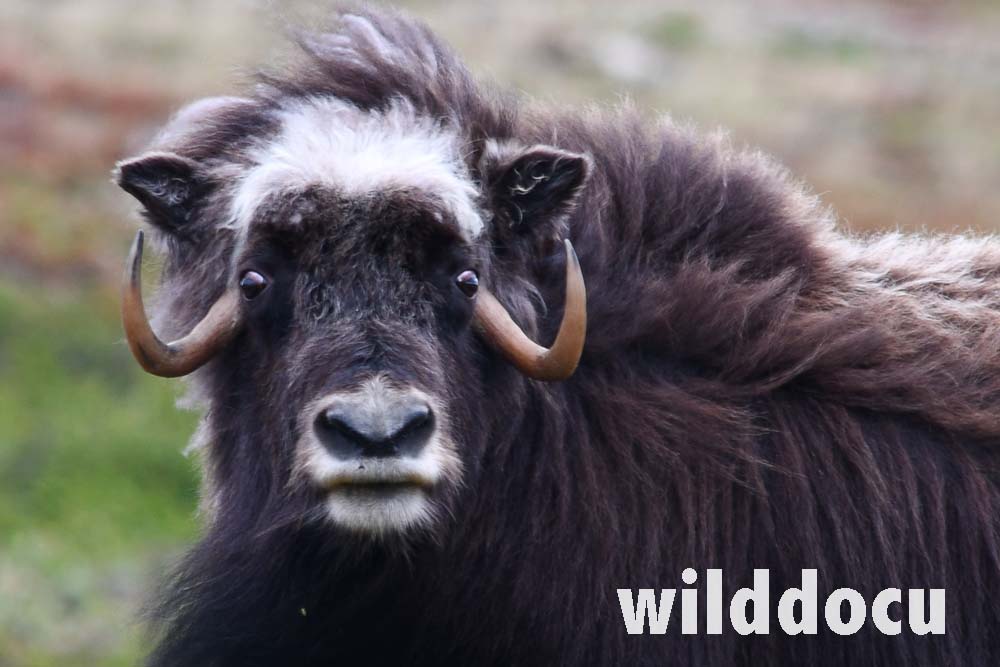 When you get looks like this, you know: Don’t go any closer! 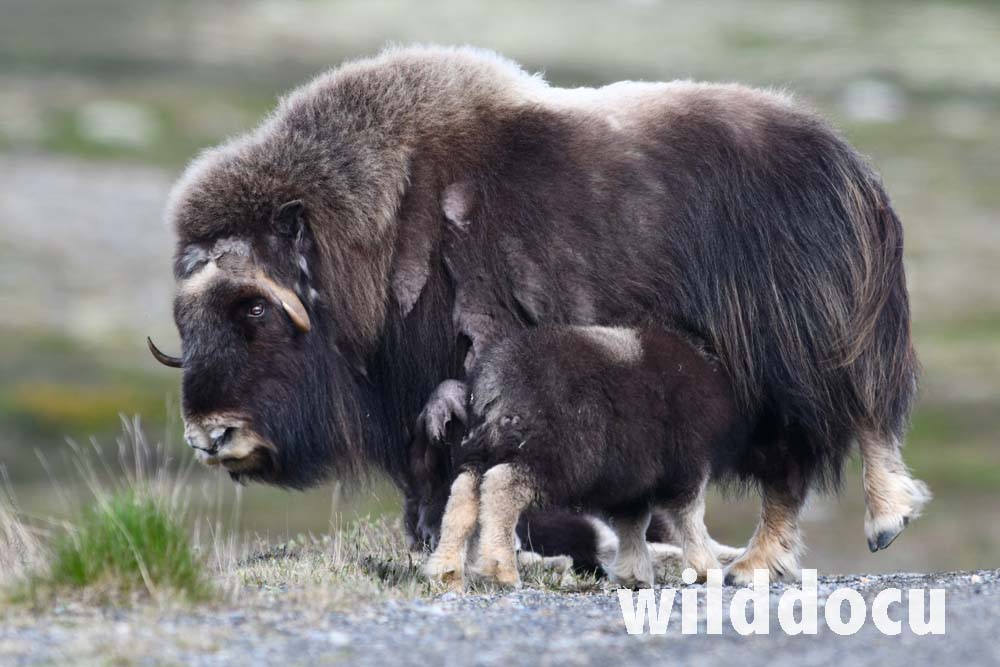 Hind foot up to lift the milk curtain 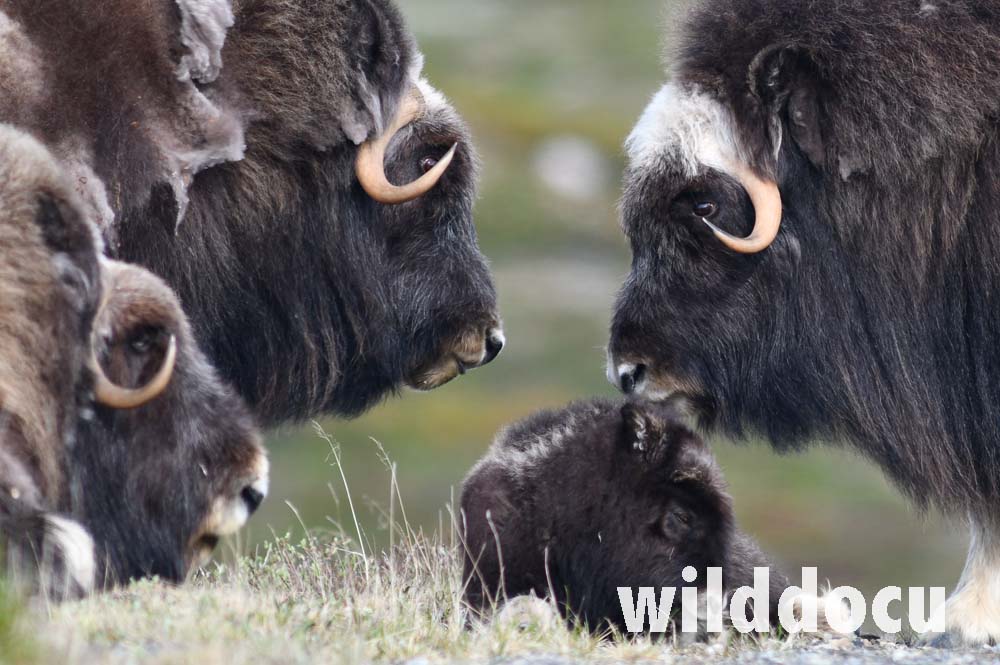 Three mommies around one baby 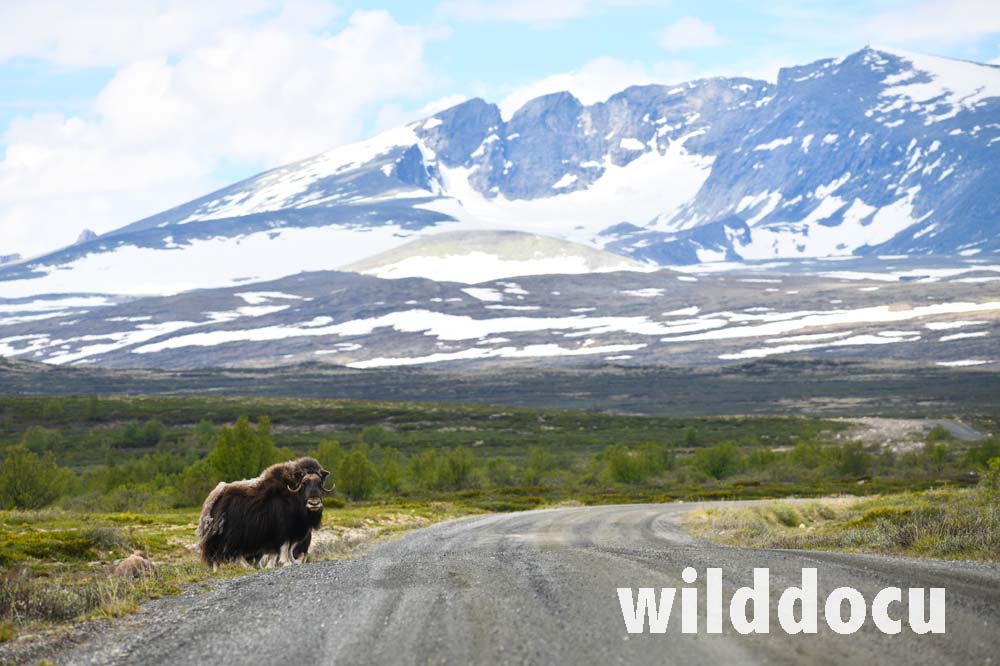 Road to Snøhetta: Usually it doesn’t take long until a Muskox on the road gives way to a passerby. It is different when Muskoxen rest and regurgitate on the road. Then you better circumnavigate the beast. 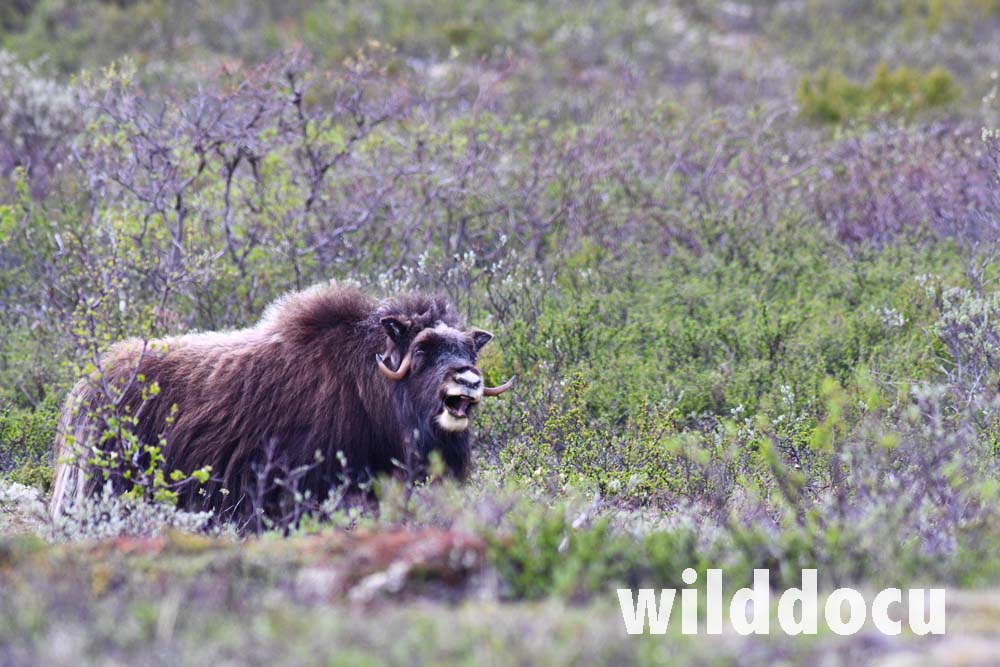 Muskox in the willows 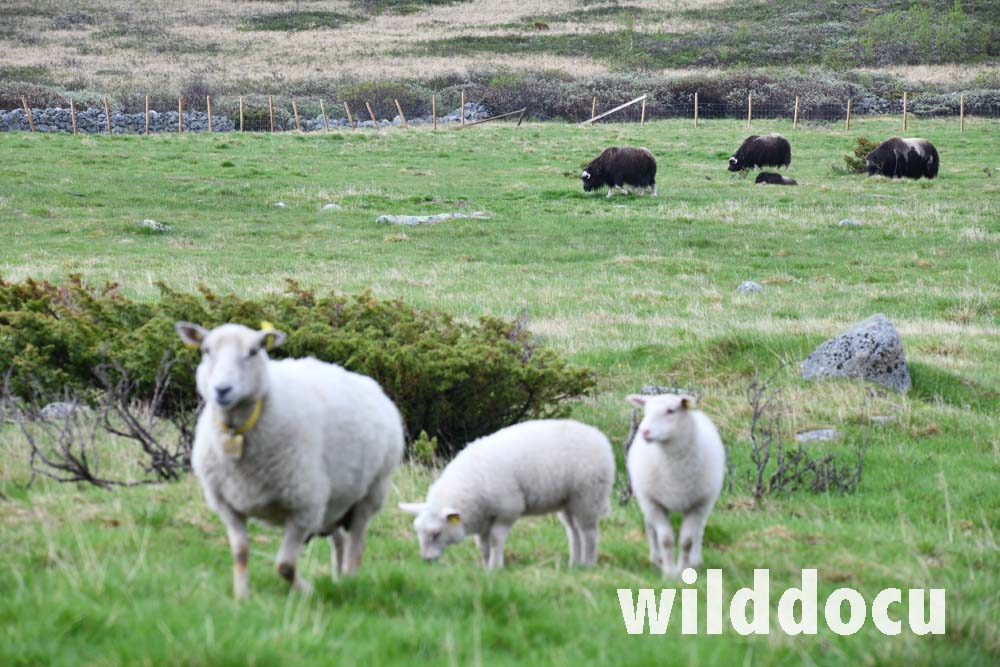 Muskox-sheep-meeting on a field below Snøhetta. 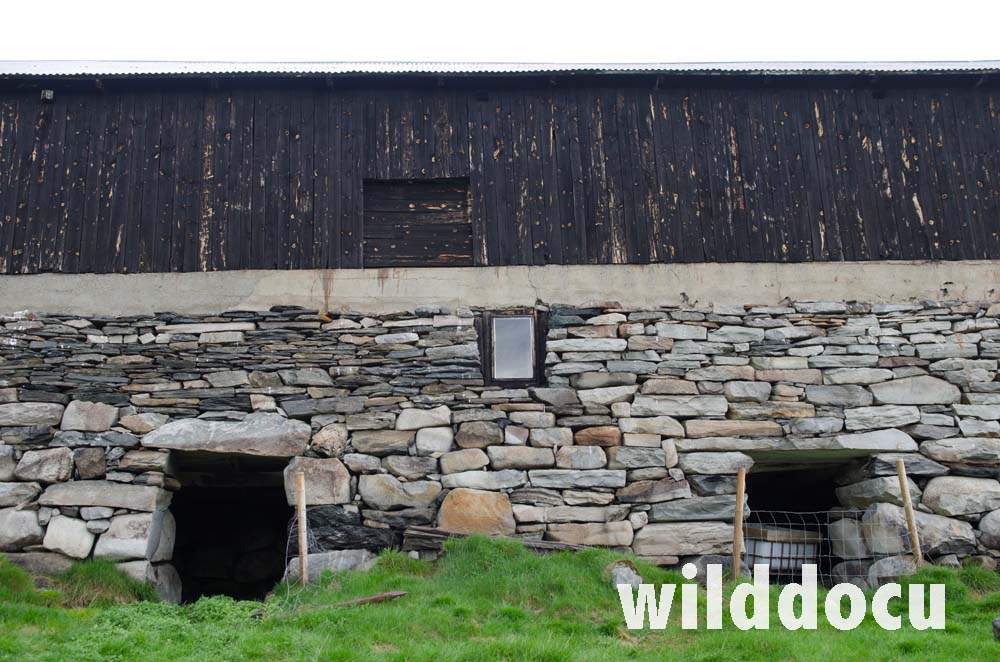 I was surprised to find tracks and wool of Muskoxen in the sheepfold (entrance to the left). 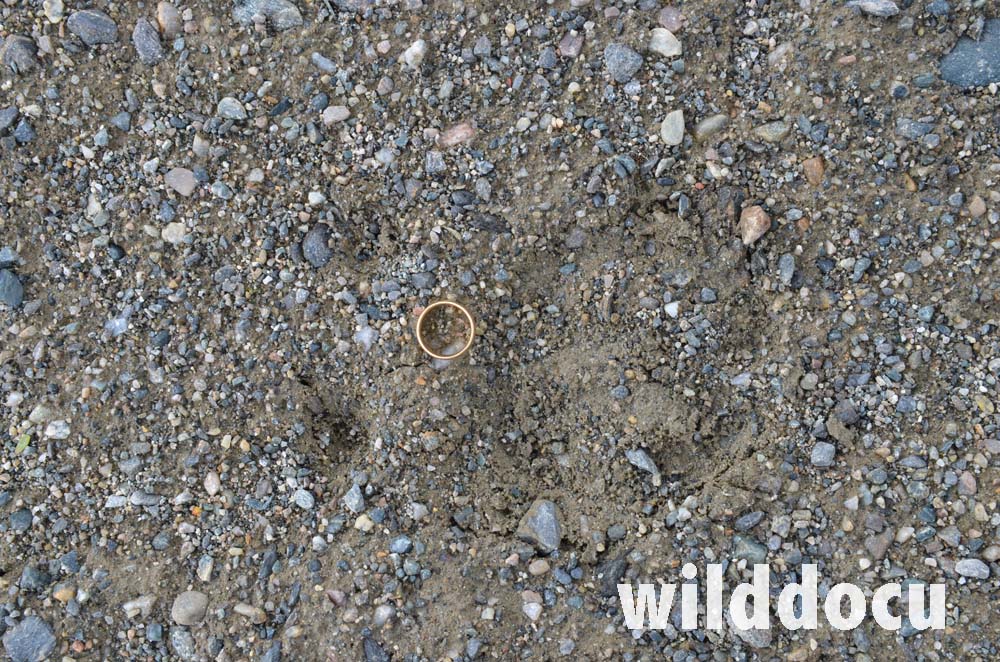 Reindeer (Rangifer tarandus):In 2003 1800 animals have been counted in the Dovrefjell highlands according to an information board. Contradicting to other sources, we read: „You are really lucky if you spot any of them“. Apparently they wander around in large herds. During one week of mammal watching we were not lucky enough to be at the right time in the right place to see a live one. 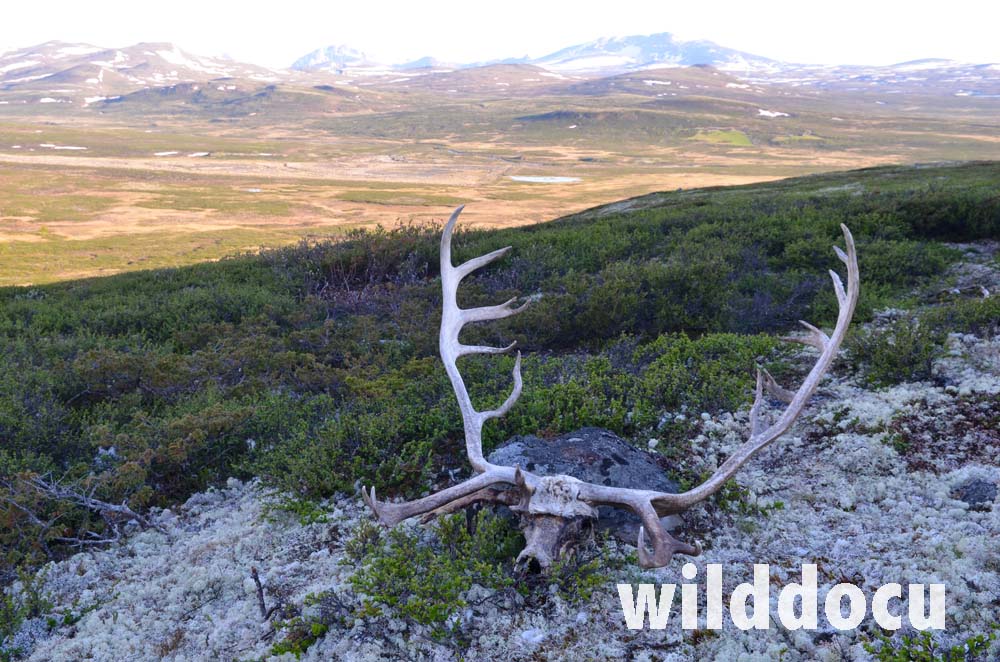 I found this scull with antlers below Snøhetta viewpoint. 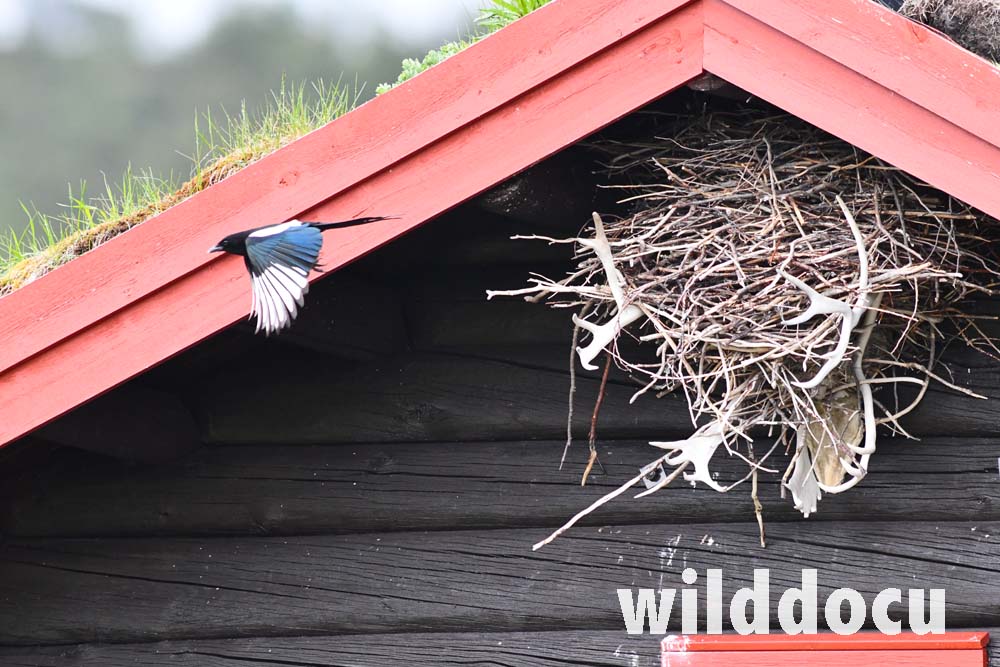 Spectacular nesting site of a Magpie which obviously values the architecture of reindeer antlers.

Elk (Alces alces) and Roedeer (Capreolus capreolus) both were found at the lake below our lodge Hjerkinn fjellstue. 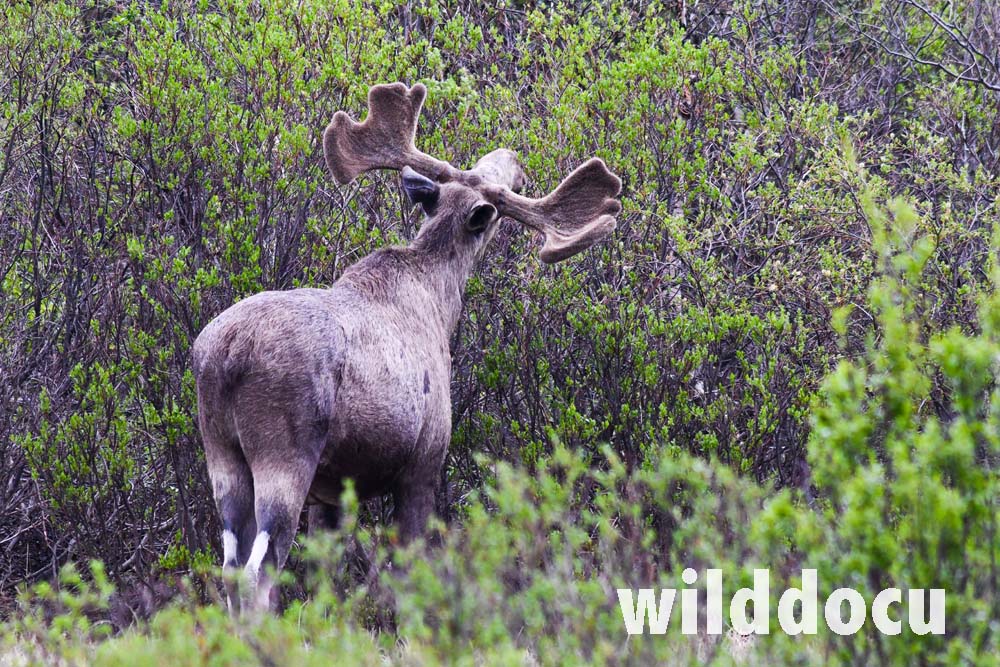 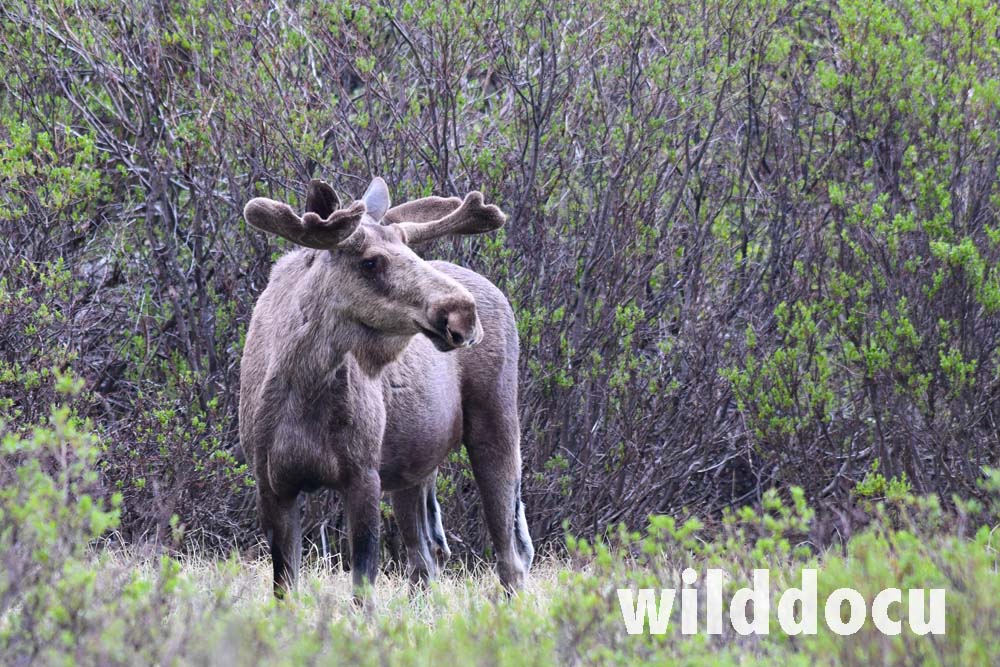 According to Martin from Hjerkinn Fjellstue Elk moved into the area just 50 years ago. 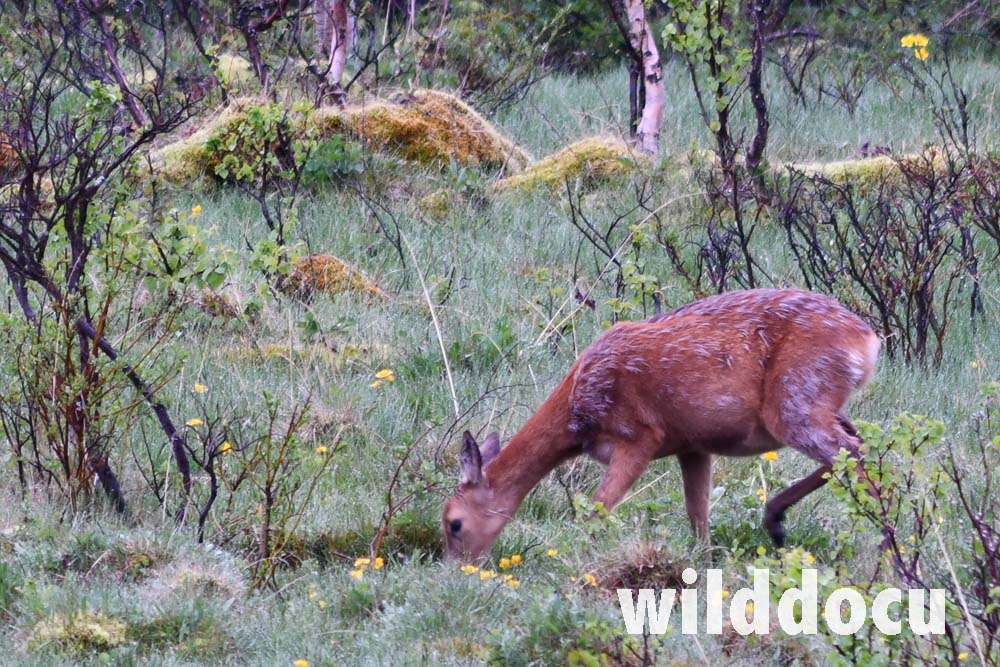 Heavily pregnant Roedeer that we found at the same site where the Elk showed up. 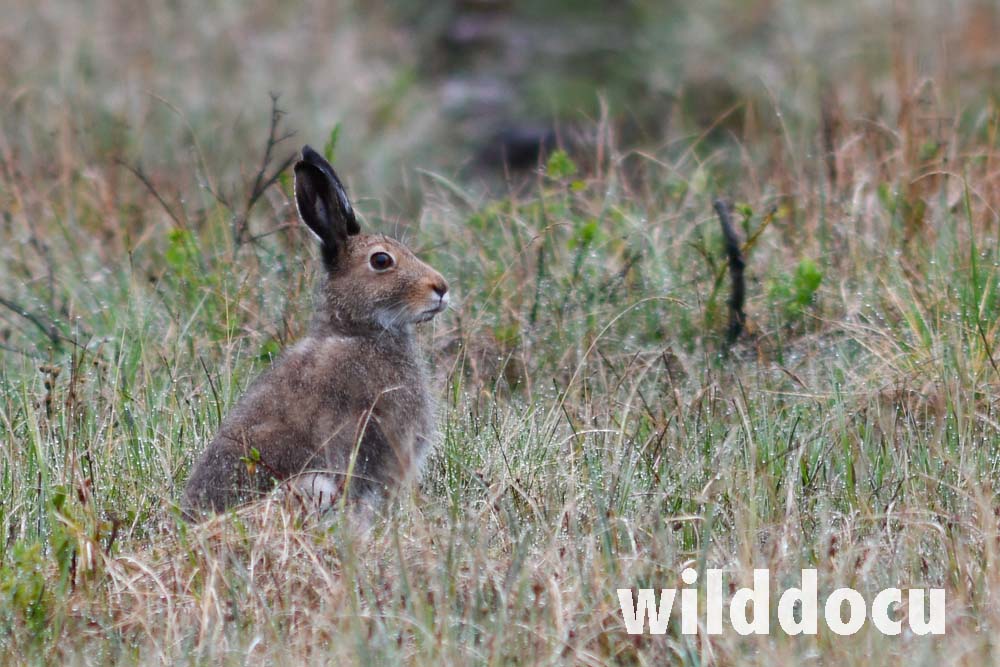 Polar Fox (Vulpes lagopus): Despite scanning the area with binoculars at almost every hour of the day, I was not able to spot a fox, which I found rather odd. Likewise I saw no rodents at all. 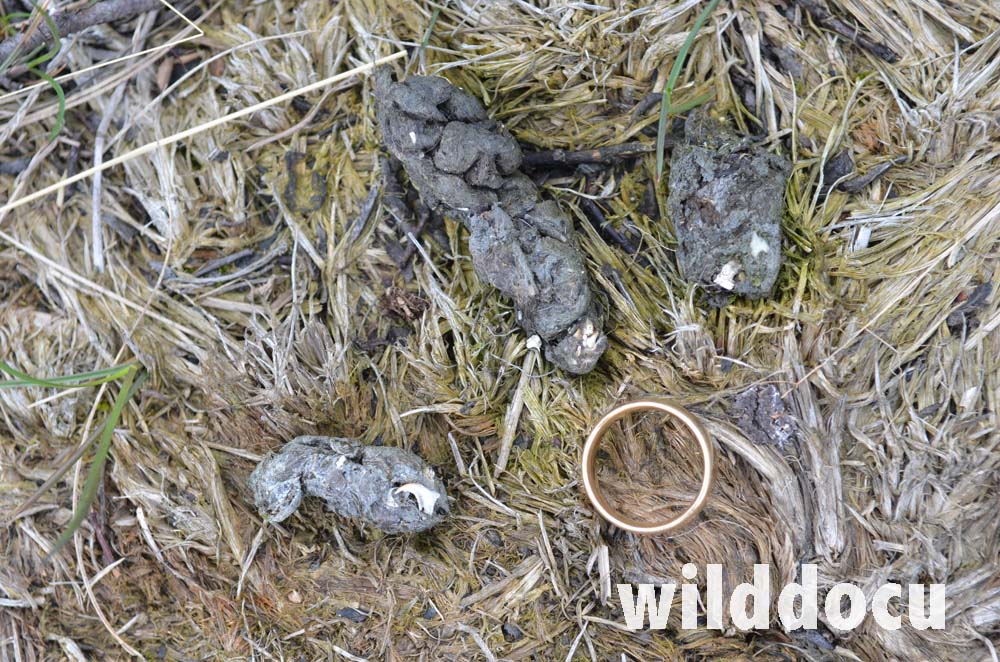 The only potential indication of the presence of foxes are these pieces of dung. Bone fragments of rodents are visible (ring diameter 2 cm). 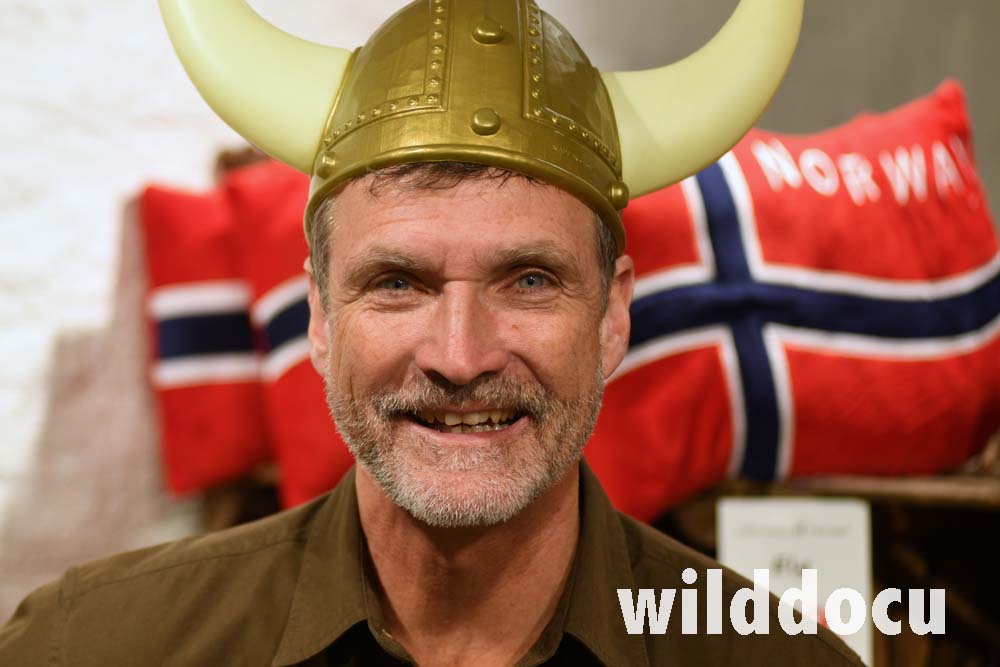 One more thing I learned on this trip, about Norway and its Vikings: Their helmets didn’t come with horns. Never mind! For meetings with muskoxen I strongly recommend a matching headdress 😉