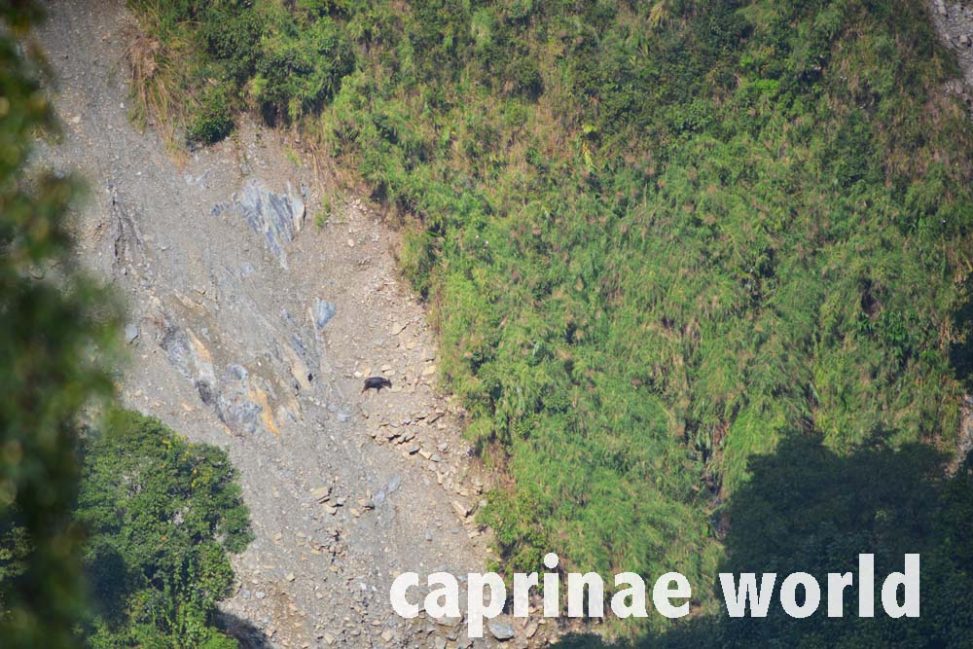 During a field trip to the Mishmi Hills, Arunachal Pradesh, India between October 24th and October 31th, 2017 a serow was observed. Comparing physical features of different species helped narrowing down it’s ID.

It appears that the ranges of Himalayan Serow (C. thar), Chinese Serow (C. milneedwardsii), Red Serow (C. rubidus) and of a yet unnamed reddish serow known as Assamese Red Serow, may meet or even overlap in the border regions between India (Arunachal Pradesh), western and northern Myanmar and China. The Mishmi Hills are located within this region. Therefore the distribution ranges of these phenotypes presented in the literature must still be seen as provisional and as very vague. [1] Hybrids are to be expected in such an area.

Accordingly any documented sighting of a serow from this intergrading area can help to narrow down the identity and distribution ranges boundaries of the respective specimen.

For the staying in the Mishmi Hills a car and driver was provided by Aborcountry – aborcountrytravels.com. In the Mishmi Hills driver Khanin Kalita and local guide Drama Mekola helped to manage logistical challenges. We routinely stopped the vehicle at viewpoints to scan open stretches with binoculars. At one of these occasions the serow was spotted crossing a scree field. The animal could only be observed for a few seconds – time enough to take a few photos with a 600 mm lens.

Raw-photos were developed and cropped and the physical features of the serow specimen analysed and compared with those of the four occurring phenotypes. Furthermore the coordinates were determined.

ID’ing the specimen: Because of the general darkish pelage colour Red Serow (C. rubidus) and reddish Assamese Red Serow could be excluded.

The specimen observed is not clearly relatable. But some characteristics indicate a relation to the Chinese Serow: The flanks are less reddish, like those of Chinese Serow. The outer side of the right thoracic limb above the carpal joints is black. This is also a feature that is more commonly sighted in Chinese Serow, but not so in Himalayan Serow.

A white mane is not present in the Mishmi Hill specimen (which is said to be typical for the Chinese Serow), in fact there is no mane at all. However Dolan (1963) states that mane colour (length too?) is also a function of age: older animals tending to have more white in the mane. [4]

However Hrabina (pers. comm.) is convinced that the specimen has „typical features of the Himalayan Serow (Capricornis thar)„, i.g. the white rim around the hooves on pelvic limbs. [6]

Conclusion: A presumably rather uncommon serow phenotype has been described. More investigations are needed to outline the scale of physical feature variability in serow species.