The Himalayan Grey Goral is the lighter greyish variety of the two Himalayan Goral species.

The generic name was originally spelled Naemorhedus, but the spelling Nemorhaedus, despite being an unjustified emendation, is in „prevailing“ usage and is used here as well. [3] Check the Himalayan Goral chapter for the species name change.

Type material: limited to an illustration in the original work, the species was described on the basis of a live animal (male) in the menagerie in Barrackpore (West Bengal). It is likely that the type specimen has not been preserved or has been lost. [10]

The northwest boundary of this species’ distribution can be found in northern Pakistan, where it inhabits the Himalayan foothills in the rolling countryside of the provinces of Khyber Pakhtunkhwa, Punjab, Islamabad and Azad Kashmir (Abbas et al. 2012). [10]

In India it has settled the states of Jammu and Kashmir, Himachal Pradesh, Uttarakhand and the northern part of Haryana. The species further extends into Nepal, where it occurs in small patches up to the Kathmandu Valley or along the Sun Kosi River, although the exact eastern boundary is not known. In Nepal the species has been documented in several of the most southern locations in the framework of its overall distribution. One of the southernmost populations inhabits the Mahabharat Range (27°45’N, 84°04’E), where a protected area of the same name was declared for it (Thapa et al. 2011). [10]

Body and horn measurements are similar to the Himalayan Brown Goral. [1, 3]

life expectancy: 15 years in captivity, likely less in the wild [5]

summer coat: very light, varying from reddish grey-brown to greyish fawn, rarely a pure pale grey or brownish colour occurs. Ventral parts of the body typically have a lighter tone, very exceptionally they are also pure white. As with all other species of goral dark pattern form longitudinal stripes. [10]

nuchal / dorsal stripe: In some individuals, especially males, a hint of a nuchal stripe appears behind the horns and usually ends in the area of the withers; this is a light brownish-grey and the hairs are extended to form a short mane, but the stripe is often not distinctive and the mane may be the colour of the body. A line continuing in the form of a dorsal stripe is also lacking. [10]

ventral side of the body: a dark stripe stretches along the medial plane from the presternal region ending roughly at the level of the elbow joints. This pattern occurs more often in males, and is usually lacking in females. [10]

limbs: This light colouring can also extend to the medial surfaces of the limbs. On the thoracic limbs it extends down to the hooves, on the pelvic limbs it usually stops just below the hocks. Distally from the radiocarpal joints and hocks, respectively, the limbs may be contrastingly coloured in ochre or cream. Dark stripes are formed on the dorsal areas of the thoracic limbs between the radiocarpal joints and fetlocks. Rarely may they be missing, or conversely, they may extend proximally up to the elbow joints. Dark stripes on the pelvic limbs are usually missing. [10]

throat patch: white; very large; rostrally it always extends to the interramal region, on the chin and lower lip, and in some individuals it reaches laterally to the cheeks, from where it passes on to the upper lip. Caudally the throat patch extends at least half the length of the neck where it forks, ending in two tips. [10]

head: The colour transition on the head is gradual, (while on the neck, it is clearly defined). A dark brown to black nasal stripe extends from the rhinarium and fades away in a wedge-shape at roughly eye level. On the upper lip there is a white crescent on both sides on the philtrum, which on the lateral edge sometimes merges with the large throat patch. On the caudal side of the base of the auricle, there is another conspicuous light patch, which can be best observed when the animal points its ears forward. [10]

tail: At the base of the tail, somewhat extended, contrastingly white hairs grow up from the lateral surfaces and line the sides of the tail. Most of the dorsal surface of the tail is coloured the same as the body up to the black tip which, in some individuals, may be extended into a terminal tuft. [10]

winter coat: very similar to the summer coat, but tends to have more grey tones. It also preserves the light patches and dark patterns on all of the places described above. [10]

colouring of the young: virtually identical to the adult animals. The light patches occur in the usual places. The dark pattern on the head, body and limbs is less clear, sometimes even lacking. A dark brown to black crest often forms between the auricles; some of the young have several pure white hairs disseminated in its centre. This dark crest disappears with maturity. [10] 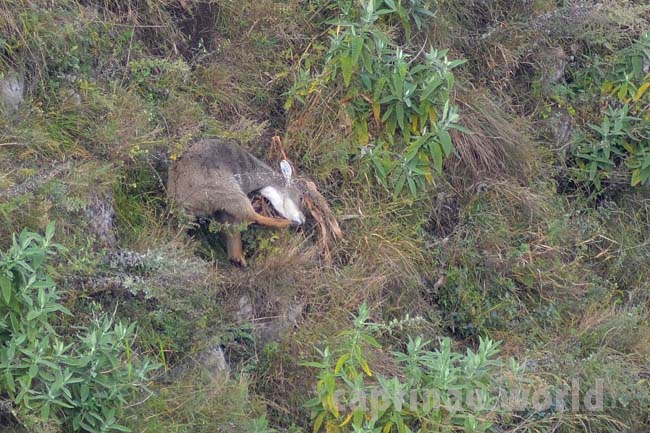 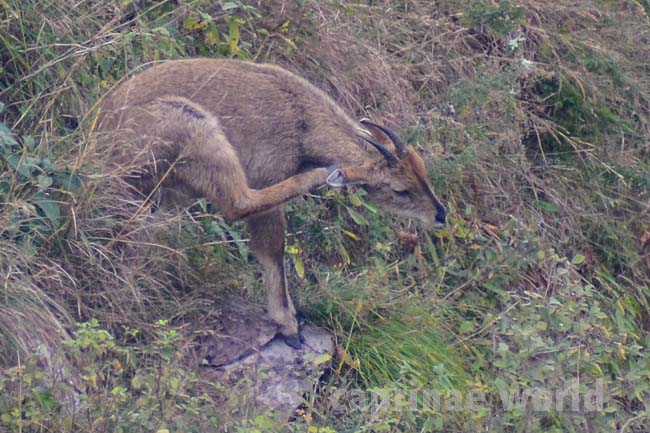 Male Himalayan Grey Goral. Note the dark brown to black nasal stripe that extends from the rhinarium and fades away in a wedge-shape at roughly eye level. Photo: Ralf Bürglin, Majathal Sanctuary, India

male horns: regularly attaining a length of 20 cm or more. They are conspicuously backward-curved and from the base to about two-thirds of the length they are noticeably, but relatively shallowly ribbed with about 10 grooves. [10]

female horns: in contrast rather short, often only 10–15 cm; more or less straight or only slightly curved and almost smooth. [10]

The horns of the Himalayan Grey Goral are somewhat longer, more curved and more heavily serratred than those of the brown form. [1]

The goral trophy with the longest horns was collected near the Mussoorie Hill Station in Uttarakhand, India, in 1902. The length was 23,2 cm, circumference 9,5 cm. [1]

The Himalayan Grey Goral reportedly occurs at elevations of 350-3000 m [3] or 1800-2500 m respectively [1] in similar habitat types as the Himalayan Brown Goral [3]. In Pakistan, the Himalayan Grey Goral occurs in the Himalayan foothills [1, 3] in diverse plant communities, including scattered pine and thorny shrub habitats. In north-western India, they occur at 350-700 m in one area and above 1600 m in another area, on slopes with a median gradient of greater than 30-40°. They seek security cover in dense, tall vegetation in steep, rocky terrain. [3] 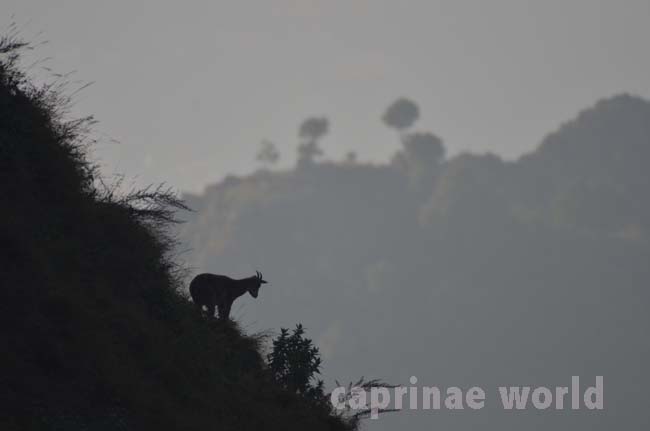 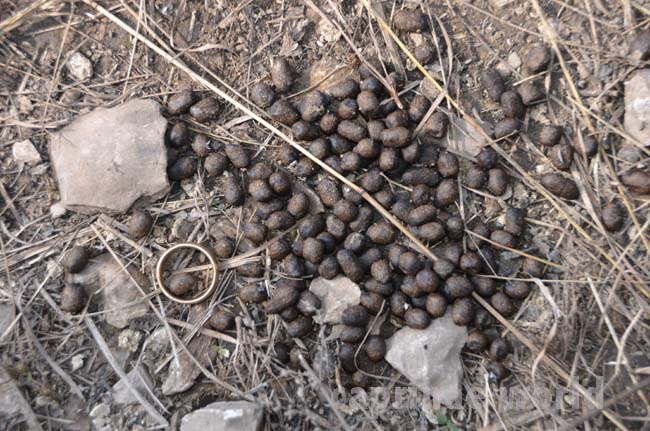 Young per birth: single offspring is the norm, rarely twins [3, 8]

The Himalayan Grey Goral is primarily diurnal. It avoids open areas when temperatures exceed 20°C. Temperature is probably a major factor determining daily and seasonal activity and habitat use. [3] 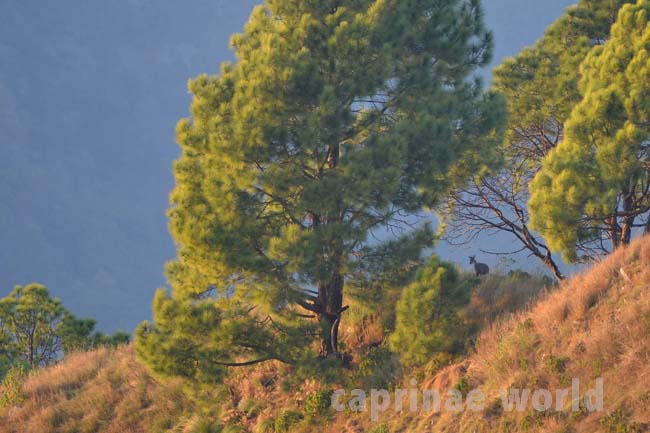 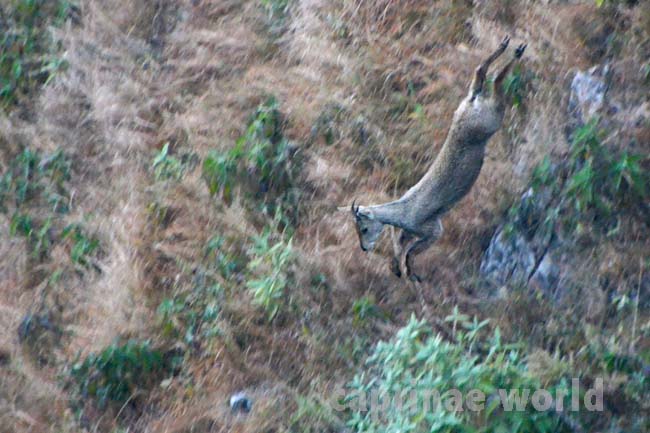 In Pakistan Himalayan Grey Goral have been documented to die due of deseases and parasites. [6] At one site in Pakistan wolf and jackal were identified as predators. [7] 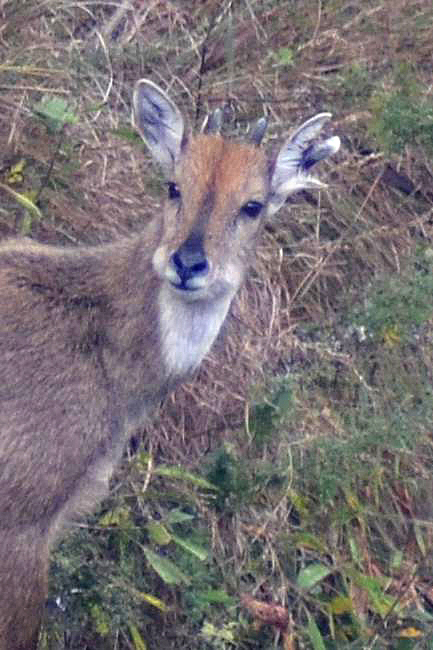 Himalayan Grey Goral at Majathal Sanctuary. Note the shredded left ear, which could be caused by a predator. Leopards are known to occur at Majathal sanctuary. Photo: Ralf Bürglin

Older males are primarily solitary; 60 percent of sightings in winter and 61 percent in summer were of soltiary adult and subadult males. In north-western India, 69 percent of males were solitary; fewer than 30 percent of females were by themselves. In Pakistan Himalayan Grey Goral were observed to migrate to lower areas during winter. [7]

Mean group size was 1,8 in winter and 1,6 in summer, with herds up to 11. In another area, mean mixed group size was 2,9. Population density was 4,6 to 10,5 individuals per km². [3] In Pakistan mean population density of Grey Goral in Machiara National Park was 2.66 individuals per km². The population of Himalayan Grey Goral was higher in Machiara National Park (4,57/km²) than in unprotected Serli Sacha site (0,76/km²). The minimum herd size was 2, while maximum herd size was 6. Larger groups were frequent in less disturbed areas in contrast to highly disturbed areas. [8] Gorals have a matriarchal society, consisting of a basic family group of an adult female with one or two young of the year and other offspring 1 to 3 years old. Larger groups were observed in disturbed areas. [3]

On the IUCN Red List the Himalayan Grey Goral is listet as „near threatened“ (as N. g. bedfordi). [2] Many populations are small and fragmented. [3]

Widespread habitat alteration and disturbance, primarily illegal hunting and competition with livestock [3], also collection of fodder, fuel wood and medicinal herbs [8] are major threats. [3] One study from Pakistan reveals that gorals do not raid crops, however people hunt and trap them for recreation and food, but less so to make a living [5]. Strict inforcement of game laws and creation of additional protected areas are a priority. Community-based conservation programs that emphasize integrated natural resource management would be beneficial to wildlife and human communities. [3]

For Pakistan 700 to 1000 individuals are mentioned [1, 8]. In the peripheral areas of its occurrence, it is extremely rare. It has disappeared from a number of its historical sites and the once contiguous distribution has broken up into 7 isolated populations (Abbas et al. 2012). Probably the strongest Pakistani population inhabits the province of Azad Jammu and Kashmir to the northeast of the country (Abbas et al. 2012). [10]

It is a quite commonly observed species in suitable habitats in India. To the northwest of the country, in the state of Jammu and Kashmir, it only occurs in patches (e.g. Hilaluddin et Naqash 2013). Further east in the state of Himachal Pradesh it is common locally, especially in well-functioning protected areas, where it is observed regularly (Cavallini, 1992). It is most numerous in the Indian state of Uttarakhand, where it inhabits a number of habitats. Its occurrence in the state of Haryana is only local. [10]

The Nepalese populations are locally numerous for now, although it is intensively hunted despite its legislative protection. Population dynamics were not investigated in the past, but the frequency of observations has declined rapidly in recent years. [10] 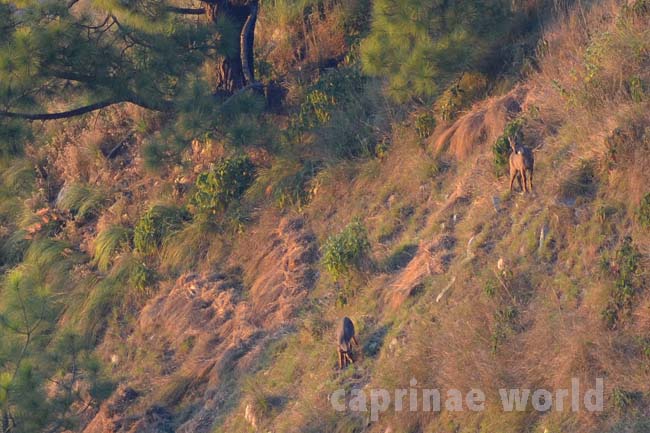 Trophy hunting is not conducted at present. But various authors emphasize that prioritizing economically viable alternative uses such as sustainable trophy hunting, would be beneficial to wildlife and human communities. [1, 3] 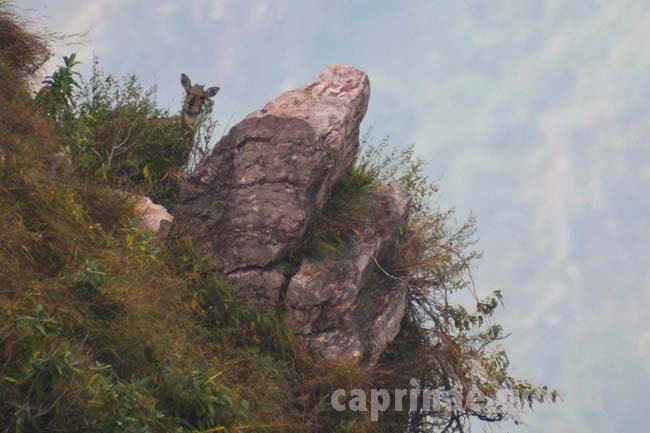