The Long-tailed Goral is the most northerly occuring goral, it is characterized by its long hair, especially on the tail.

Previously classified as a subspecies of N. goral, N. c. raddeanus is a synonym. Analysis of the mitochondrial cytochrome b gene indicates that long-tailed Goral populations in Korea may be genetically distinct from populations in China. (3) A breeding experiment in the Prague Zoo, involving Chinese Goral (N. g. griseus) and Long-tailed Goral (N. g. caudatus) produced sterile offspring. Hence both forms appear to be different species. (1) 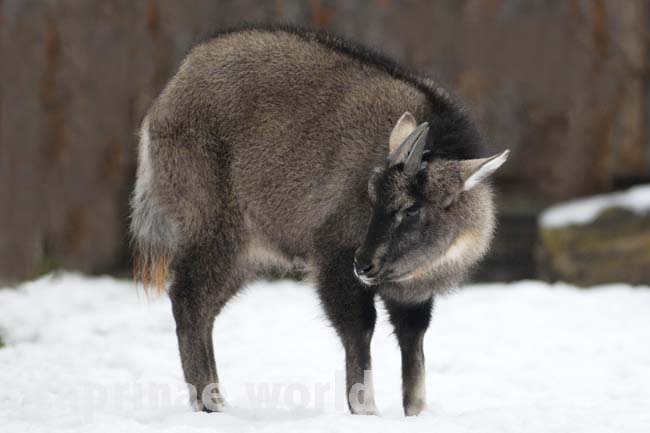 glands in front of eyes: inconspicuos (7) 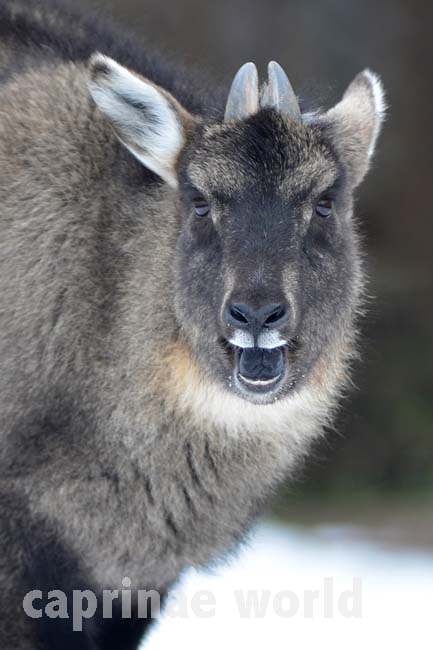 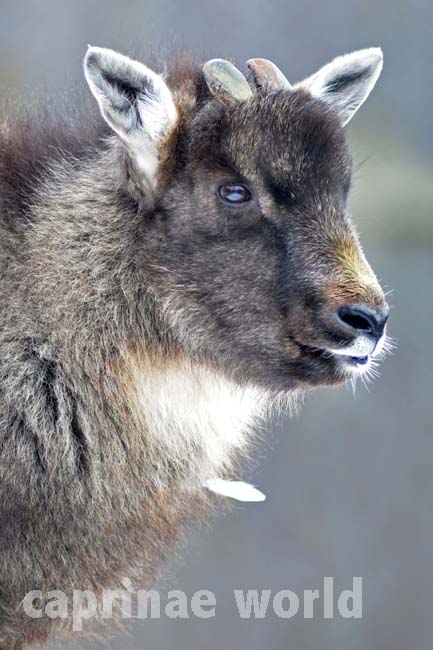 Body color of the Long-tailed Goral is gray-fawn to brown, but it is paler than the Chinese Goral, and has no black overlay. Legs are creamy to yellow-gray, with less of a sharp transition to body color than in the Chinese Goral. The front of the forelegs comes with a dark line (4) – (not present in Chinese Goral (6)). The Underside is pale fawn or gray; groin and axillae are white; chest is darker; throat is broadly white, extending forward to the chin, with no golden tone on edging; lips are white, the white extending to the mouth angles; forehead and nose are usually not very dark; the whole head, expecially the muzzle, is more brownish; often with a gazelle-like stripe. A stripe on the neck continues to the somewhat thinner dorsal stripe. The color of the stripe is almost black in males and dark grey in females. (7) The tail is usually black near the base (4); a broad white fringe borders the tail below (5), reaching to the hocks or below (in Chinese Goral more of the tail is black – at least two-thirds of it (7)). The length of this hair gives N. caudatus its long tailed aspect. Fur is longer, softer than in other species; underwool is ashy brown, differing from the long, pale, buffy, dark-tipped contour hairs. (4) 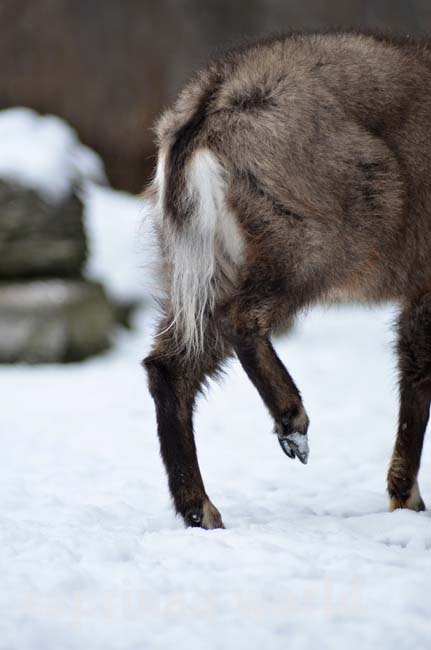 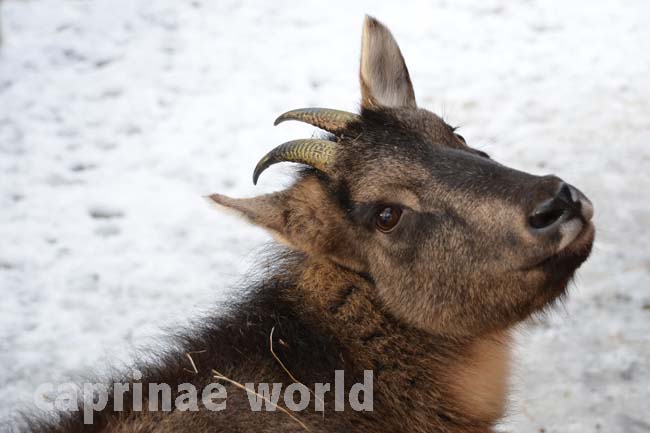 The recurved black horns are basally annulated – more gracile than in serows. (6) The horns are apparently shorter on average than those of the Himalayan gorals, but with similar base circumferences (1). horn length: c. 15-18 cm (3), 12,7-17,8 cm (7), up to 23,5 cm (3, 7); horn basal girth: c. 7-10 cm (males) (3) In males horns are strikingly thick. Ribbing is deep and conspicuous, in even-numbered grooves over 20. Females have slightly shorter, more slender and straighter horns. The ribbing is deep and conspicuous, but the number of grooves is much lower, around 10. (7) 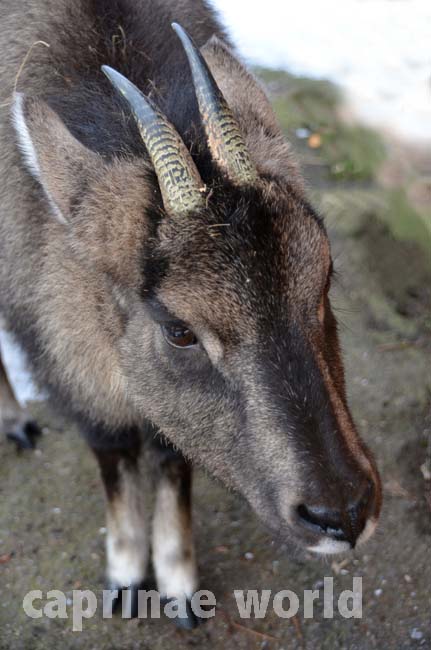 The Long-tailed Goral occupies precipitous terrain with cliff component at elevations of 80-2000 m. (3) In China they inhabit evergreen and deciduous forests with exposed grassy ridges from about 500-2000 m (6). In Russia, they occur in seashore cliffs, usually at 100-300 m, and in inland montane areas of mixed pine forests and oak woodlands at 300-800 m. Long-tailed Goral use slopes of 45-90° and can tolerate snow cover up to 35 cm. (3) 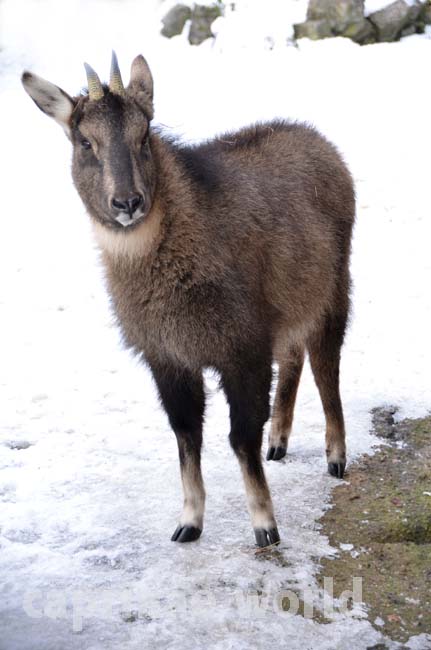 In China Long-tailed Goral eat on a wide range of plant material: grass, herbs and shoots, leaves and small trees, and even some fruit (6). In Russia, the diet of the Long-tailed Goral varies seasonally, but consists primarily on grasses (77-82 percent). Browse (eating grass) dominates the diet in summer. It can constitute up to 40 percent in winter. Gorals dig through snow to feed and spend 72-82 percent of their total active time feeding. (3) 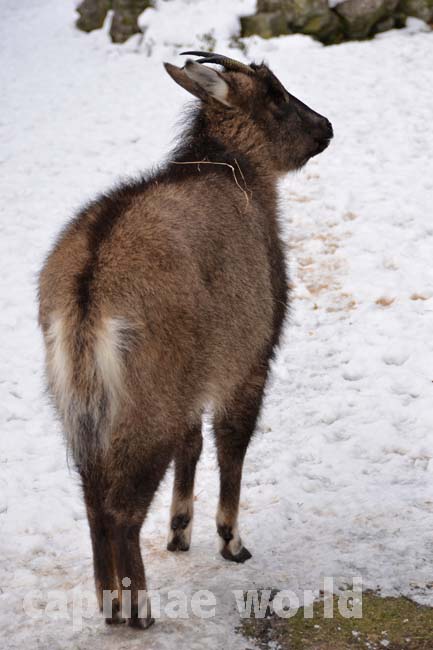 The long-tailed Goral is diurnal or nocturnal, usually feeding at night. They have 4-5 feeding periods from 5:00 to 21:00 h. (3) Has resting scrapes in sheltered places under rocky crags and cliffs and also rests on rock ledges. Visits salt licks. Gives hissing sneeze call when alarmed. (6)

Males occupy 22-55 ha and mark vegetation in home ranges with the postcornual gland, a gland behind the base of the horn. (3) This goral typically lives in small groups of 4 to 12 individuals, with older males usually solitary. (1) Groups consisted of two females with young: 2-5 animals less than three years old; an adult male and 1-3 subadult males; or mixed groups (at least one adult male and female and various individuals of both sexes) of up to 16 animals. Only young males disperse. (3)

The Long-tailed Goral is classified as „vulnerable“ on the IUCN Red List because of a population decline, estimated to be more than 30 percent over the last three generations (approximately 21 years). (2) In the early 1900s, the estimated population of the Long-tailed Goral was 2000 individuals in Russia. By 1980, it was reduced to no more than 550. In South Korea, fewer than 300 remain.(3) The Long-tailed Goral ist threatend through: over-exploitation, shrinkage in distribution, and habitat destruction and degradation (2), further through range deterioration by livestock, also illegal hunting can be a major cause of adult mortality. Enforcement of game laws is a priority. And there is need to expand and increase protected areas and limit human intrusions in goral habitats. (3) 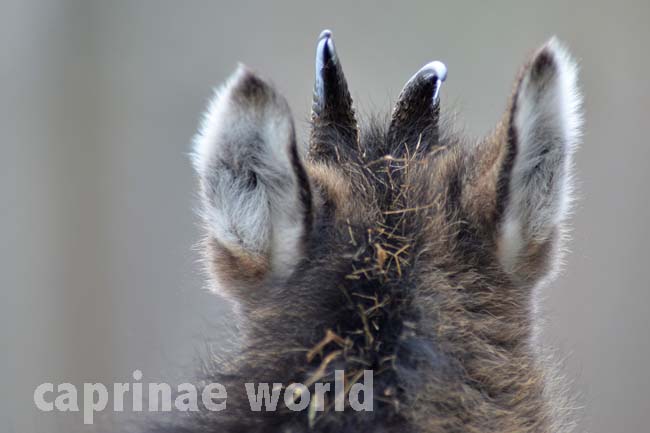