You could call the Chinese Goral an Oxymoron: Of all the goral species it has the widest distribution, but yet its range is restricted to just one country. 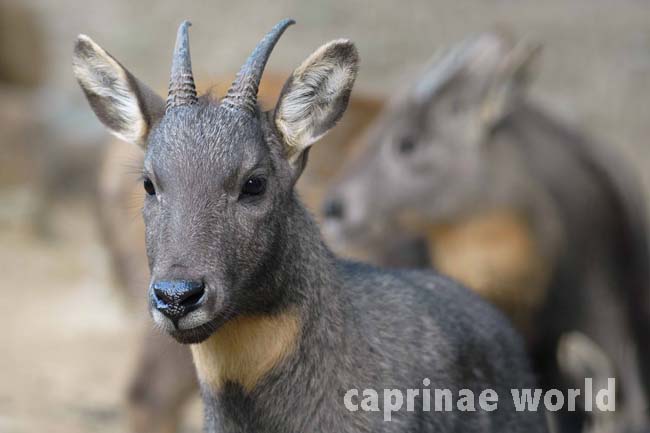 The Chinese Goral was previously classified as a subspecies of N. goral. (3) Since then numerous descriptions of Chinese gorals have been made (Table 1) (4). Only one is valid today. – At last the name N. griseus included N. evansi (Burmese Goral), and N. griseus as subspecies. (5) Many authors consider them full species today (3, 4, 5, 6).

On the other hand there is no doubt that there is some degree of variation for example in pelage coloration throughout the range. For example the gorals of southeastern China, formerly known as henryanus and arnouxianus, apparently have a darker brown tone to the body pelage. (1)

The Chinese Goral is endemic to China (6) – orruring in central, Southeastern and southwestern parts of the country (Northeast Sichuan to Shanxi, Henan, Hubei, and East to Fujian, Yunnan – Lijiang, (3) and the eastern margins of the Tibetan Plateau (1).

Table 2: Description of some pelage characteristics

In general corresponds to the adults; they are light grey with cream-coloured distal parts of the limbs. The nuchal and dorsal stripe, compared to the adult animals, is lighter – light grey-brown. The young have a quite conspicuous dark brown crest on the crown of the head. (6) 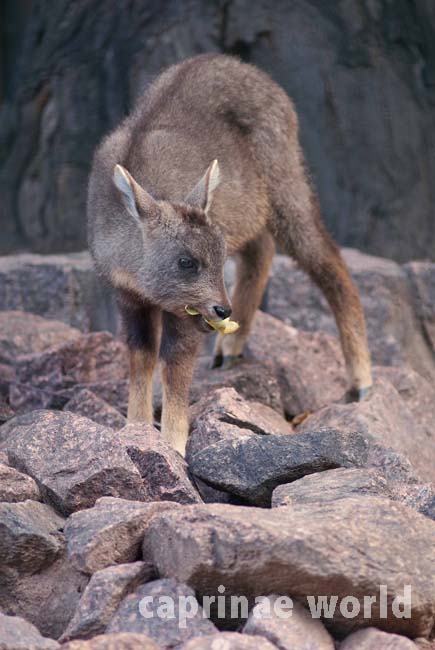 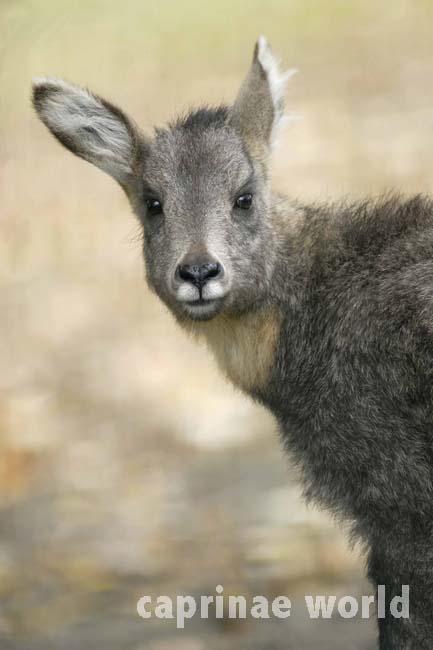 Young goral have a conspicuous dark brown crest on the crown of the head, which is almost gone in this young Chinese Goral.

The black conical horns are curved and sharply pointed (1), but hardly downturned (4). Horns of rams are generally longer than those of females. While Damm and Franco (2014) belief that horn length probably rarely exceed 20 cm, Hrabina (2015) states that they are often longer than 20 cm and distinctly thick (6). At base and lower third the horns show distinct irregular rings (1), which tend to be more prominent than in the Himalayan gorals. (4) Ribbing is deep and conspicuous, the number of grooves rarely drops below 10. (6) 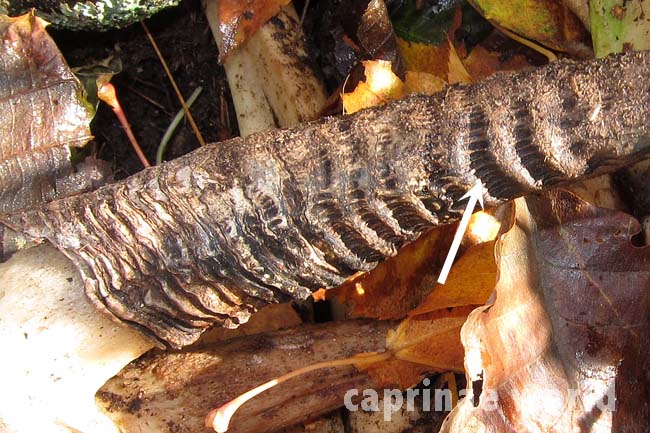 The annual grooves in this Chinese Goral horn from Foping Nature Reserve, China, show an interesting pattern: The grooves are multi-partitioned through vertical aligned lamellae (arrow) made of horn material.

The Chinese Goral (N. griseus) is bigger than the Burmese Goral (N. evansi). Regarding the pelage, each individual hair of the Chinese goral is „almost uniform“, whereas the pelage of the Burmese Goral is „light grey with disseminated darker brown-grey hairs, which somewhat darken the overall tone“. In comparison with the Burmese goral, the grey-brown nuchal stripe as well as the dorsal stripe is thinner. (6) The Chinese Goral differs from the Himalayan gorals by usually having a longer coat and a long tuffted tail (5), a deeper scull (4) and furthermore by apparently having more prominent horn rings. (4) The Chinese Goral differs from the Long-tailed Goral by having more black fur on its tail and more contrast between the color of lower legs and body. 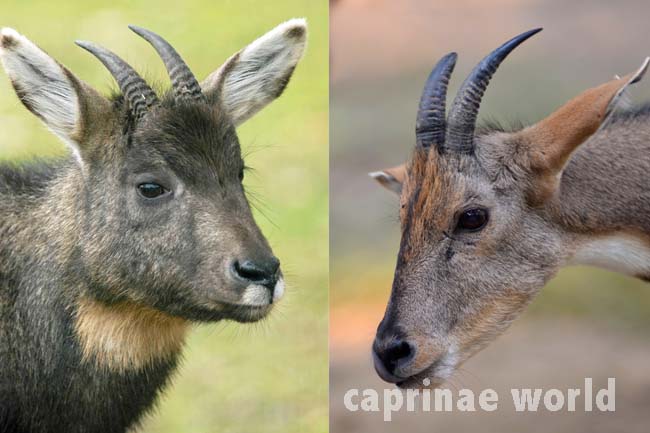 Chinese Goral (left) and Gray Himalayan Goral: The Chinese Goral differs from the Himalayan gorals by having a deeper scull and more prominent horn rings.

The Chinese Goral occurs at elevations of 1000-4000 m. (3) They inhabit steep, rocky terrain and plateaus in mountainous areas, and sometimes subtropical mixed forests and deciduous forests near cliffs, but primarily stays within rugged rocky terrain. (1) 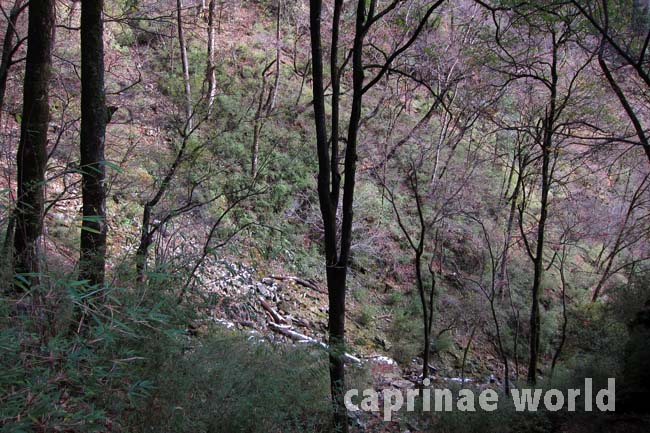 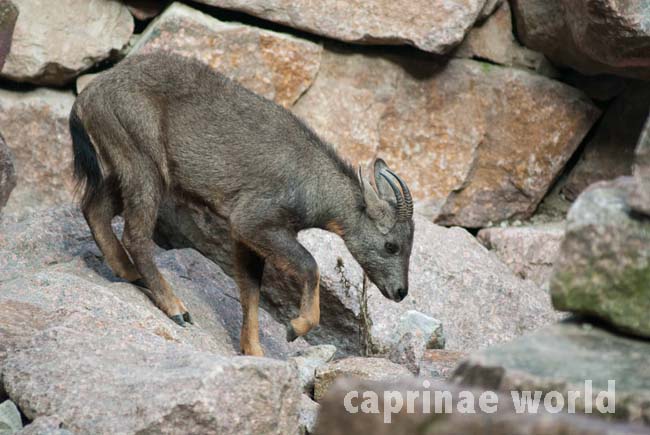 Like all gorals the Chinese Goral is a very sure-footed climber. 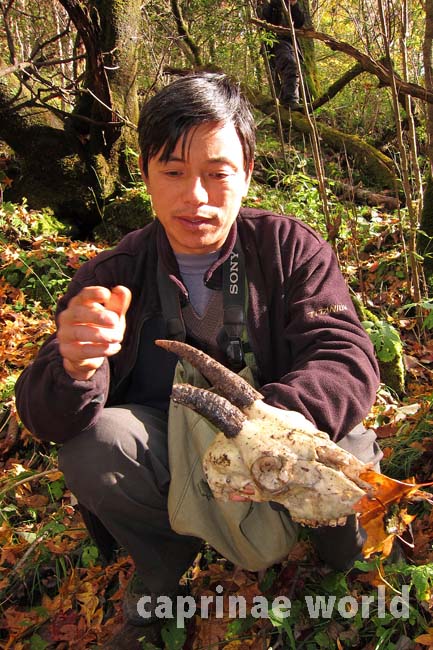 Scull of an old Chinese Goral (presumably more than 15 years) found at Foping Nature Reserve, China. A captive goral is known to have lived 22 years. 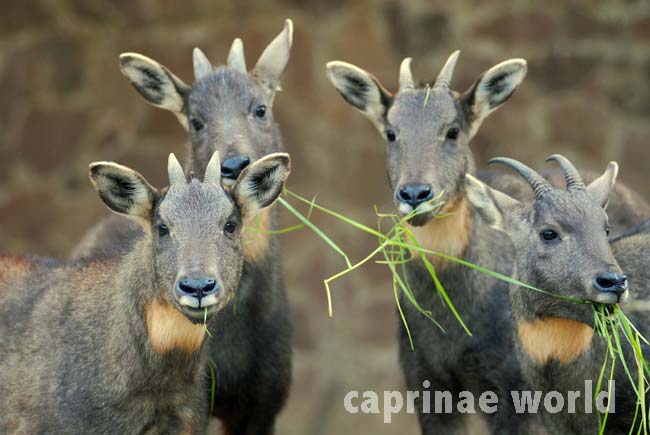 Grass is probably the preferred food of Chinese Gorals. 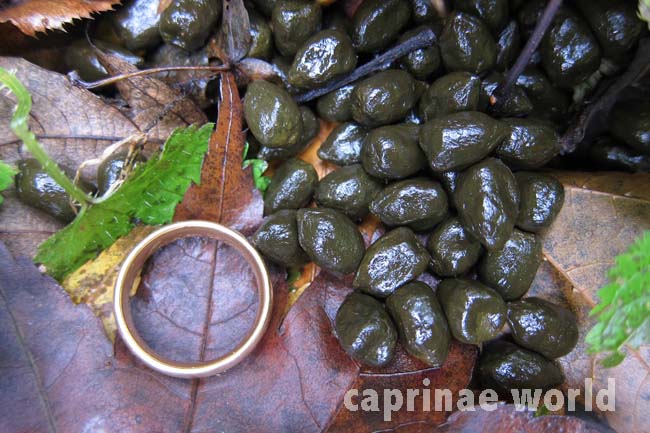 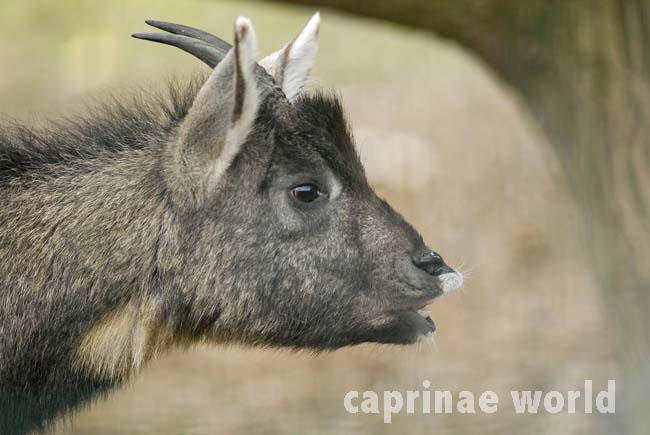 Chinese Goral in flehming position: inhaling with curled back upper lip and exposing front teeth. Flehming facilitates the transfer of pheromones and other scents into the vomeronasal organ (VNO) located above the roof of the mouth.

likely crepuscular, based on what is known about other gorals. (3) 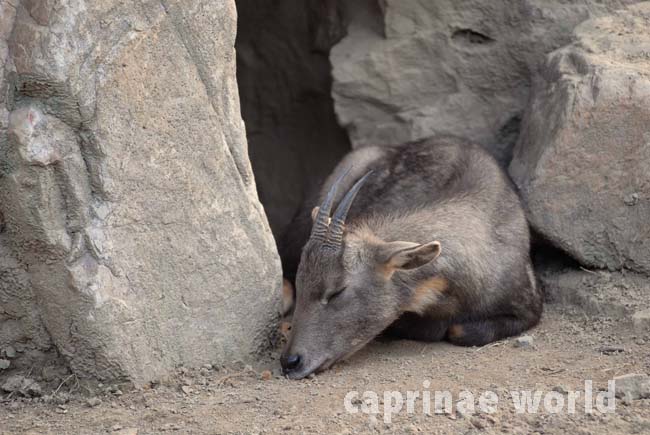 Chinese Goral may use rock shelter to rest.

According to IUCN the Chinese Goral is classified as vulnerable. (2) In China they are frequently hunted or snared by local people for meat, fur and medicine (1), also for illegal commercial markets. Habitat loss due to forest destruction and unsustainable livestock grazing coninue to fragment and deleteriously impact goral populations. (3) Protection is less than effective because local people are mostly ignorant of the legislation. (1)

No entries found. Most probably there is no opportunity for foreign hunters to hunt Chinese Goral currently. 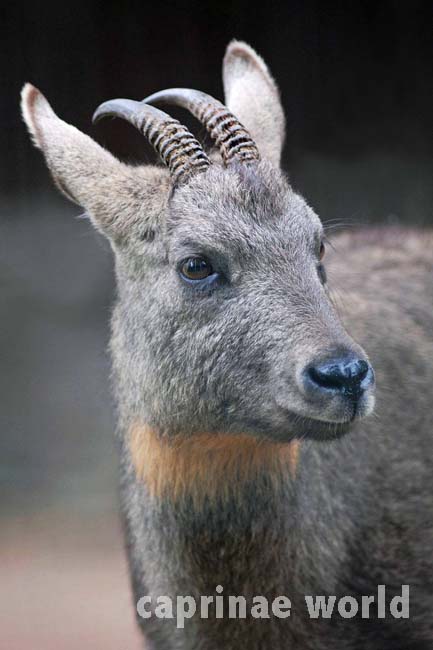