I went to Croatia between April 24th and 27th 2019. I had two days for Aoudad, one for Balkan Chamois and one morning for Mouflon. 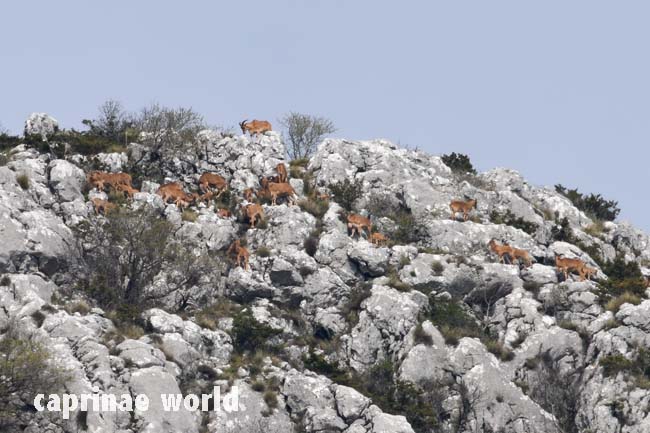 Herd of 28 Aoudad at Mosor

I flew with my daughter and a friend of hers from Basel into Split, where we were welcomed by Stjepan „Miro“ Olujić.

Miro is responsible for the introduction of Aoudad in Croatia. He broad this North African species to Mosor 30 years ago, where he holds the hunting concession for the area (12.000 ha). Naturally he is very knowledgeable about wildlife in his area and very open to guide not only hunters, but also mammal watchers. I stayed in an apartment in Gata, a village at the base of Mosor. From the building you are able to see Aoudad in the mountains (highest point at ca. 1300 m asl). It takes you 3/4 h from the airport to reach Gata.

Maybe as a wolf lover you won’t become Miro’s best buddy. If you dare to broach the subject, be ready to hear endless stories of his losses in the hundred thousands and preyed on sheep and goats. If this doesn’t convince you of the evilness of wolves, Miro is ready to show you a photo on his smart phone taken in Bosnia of a partially eaten up refugee. Otherwise Miro is good company willing to get up at any time, spend many kilometres behind the steering wheel of his 4×4 and scan the horizon with binoculars for endless hours. www.dalmacijalov.com/deu/jagdrevier.html mail: stjepan.olujic@gmail.com

According to Miro the best time to see Aoudad at Mosor is January, February and March. Later in the year the animals move uphill, and it is difficult to follow. There are about 100 Aoudad in the area. Because the population is hunted the animals are rather shy. Expect to see them at a distance of 400 metres. If you are lucky – like I was twice – 250 metres is the closest you can get. If you want to find out more about Aoudad, you are welcome to check out the Aoudad chapter of my caprinae world. 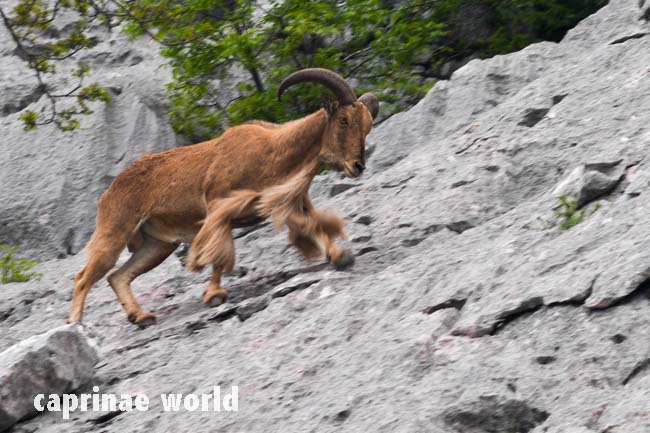 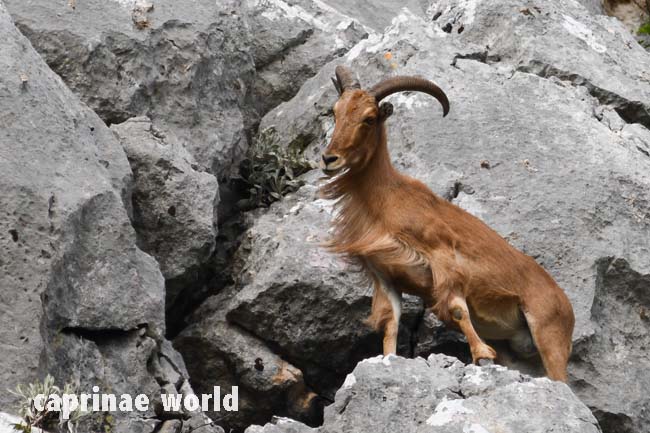 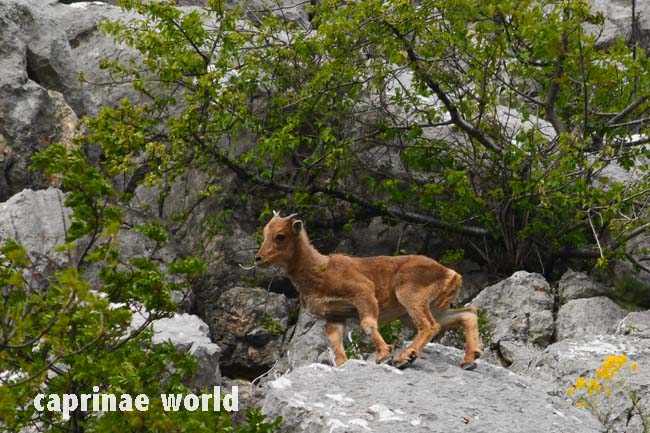 Young of the year

In the western part of Mosor you can also find Mouflon. According to Miro in recent years the population has suffered a lot from wolves. Mouflon seem not to be adapted to their presence – a point I have heard several time in the last years. We saw only two animals.

A bit further down the coast to the east is Biokovo. It is the name of a mountain range as well as a nature park. This range is really impressive as it rises from sea level vertically to as high as almost 1800 m asl. The nearest town is Makarska. A little up the hill is a gate with an office, and they charge you a reasonable sum for entering the park. In the lower parts there is pine and deciduous forests. Further up you reach a hilly plateau with the typical Karst formations the area is famous for. There could be Chamois and Mouflon all over the place, but probably your best bet is at the edge of the plateau, where the animals find refuge from predators in the steeper sections of their habitat. Hunting season is between October 1st and January 31st. During the non-hunting season animals should be more approachable.

If the Biokovo Chamois are really pure Balkan Chamois (Rupicapra rupicapra balcanica) is not quite clear. Miro is convinced the animals are pure, nevertheless I found one source (Damm and Franco, 2014), stating that the animals in the area are „possibly Alpine/Balkan hybrids“.

On the way to the highest point – Sveti Jure (1762 m) – there are several parking areas or side tracks, where you can park your car. You can also hike or cycle the area. For more info see the park’s website:

There are just a few dirt roads along the base of Mosor. We drive back and forth and scan the slopes above us. During the course of the afternoon we see several Aoudad groups, consisting of between 2 and 28 individuals. Many young of the year are already born. Yearling are also numerous. One female with a young lets us approach up to 250 metres. Great! Once a European Hare (Lepus europaeus) crosses the road.

The weather has changed. There is rain. And the wind is so strong that I am not able to use my tele lens efficiently. A few shots I get: 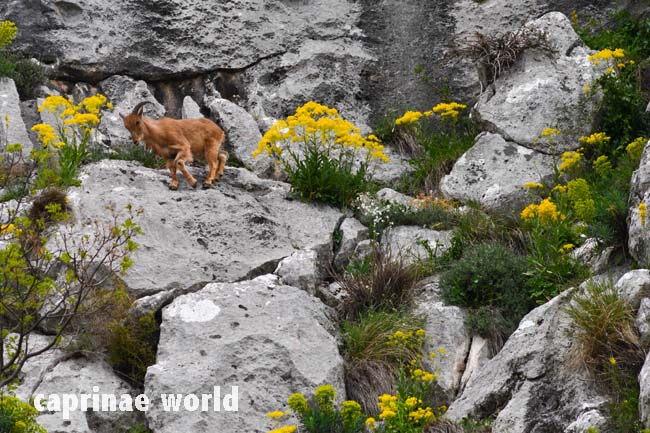 Young male amidst spring flowers: In spring it can already be tricky to reach the realms of Audoad. But the season definitely also has its advantages – from a aesthetical point of view.

So we change plans drive back to Split, where Miro shows me a relief of a Mouflon hunting scene in the Cathedral of Saint Domnius in Split. 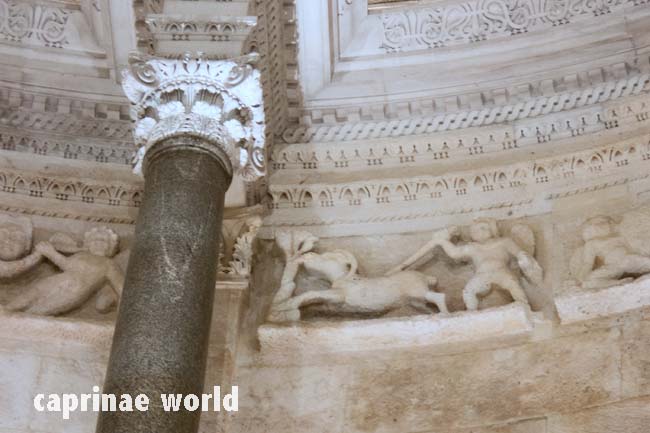 Mouflon hunting scene in the Cathedral of Saint Domnius in Split, dated from the 4th century CE /AD.

I also visit the Archeological Museum Split, where I make another find: 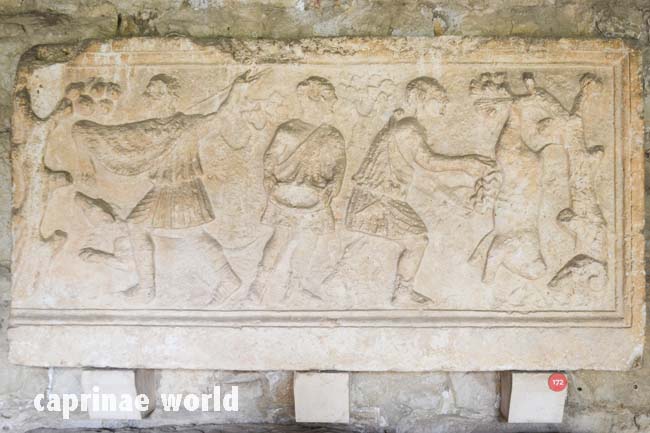 Relief AMS-D-295 depicting a hunting scene in a forest and the offering of an animal, most likely a Mouflon ram. It dates from the 1st or beginning of the 2nd century CE / AD.

The male figure on the left-hand side shows a hunter standing in ambush behind a tree, with a hunting weapon in hands and a dog behind him.

Second male figure shows a slave with a bowl, waiting to collect the intestines of the hanging ram.

The third male figure is dressed in a garment (exomis) made of a sheep skin. A knife hangs from his waist. He is about to take the intestines out of the hanging Mouflon. The head of the animal is cut off and lies on the ground.

The slab (Steinplatte) was part of a larger whole, probably a sarcophagus. It was found embedded in the Roman water supply system in Salona (Salona is situated in today’s town of Solin, right next to Split, Croatia). It dates approximately from the end of the 1st or beginning of the 2nd century CE / AD.

Based on logical assumption, it can be assumed that the depicted animal is a wild one and not a domestic animal. (Why would one hunt something that could easily be gathered?)

The question that arises is: Did Mouflon occur along the Dalmatian Coast as early as the 1st century CE / AD? And can the exhibits shown above give an answer?

According to Damm and Franco (2014) Mouflon were brought to the Mediterranean islands of Corsica and Sardinia 6000 BC. They further state that the first mentioning of Mouflon on the European mainland dates back to 1566. But Pliny the Elder (AD 23–79) writes in his Naturalis Historia, VIII: In Spain, but especially in Corsica, there is a species very similar to the sheep, the mouflon, whose coat resembles more the goat hair than the sheep fleece.

So if we have a clue that the Mouflon was in place on the European mainland (Spain) 2000 years ago, it seems likely that the archeological findings in and near Split (shown above) support the idea that the species was present in that area around the same time.

One should note that the ancient artists most of the time only inherited the idea of scenes that they depicted on reliefs, sarcophaguses, stelae, sculptures, etc. Their work was based on canonical scenes (scenes according to the rules), rather than scenes seen by the artist. And the hunting of a ram is a common representation, rooted in many mythological scenes.

In the afternoon we are back in the mountains. The weather is not really better, but we find one Aoudad herd that seems to try to escape the bad weather and moves downhill. I evaluate the direction of travel, sneak around a ridge, hide under a tree and wait for the herd to show up again. The plan works, and I get some decent photos. 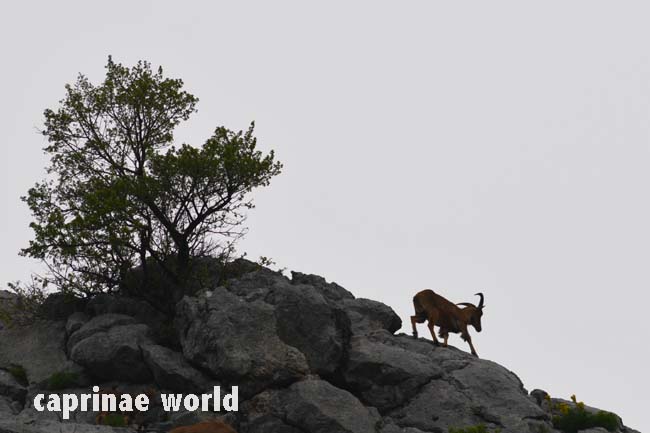 Aoudad on the ridge. 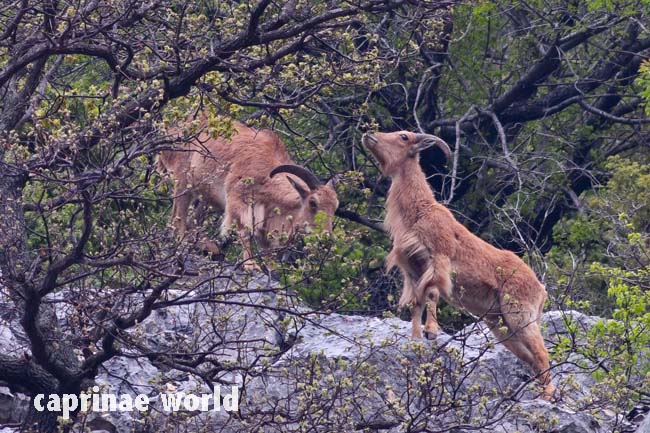 It’s about an hours drive to Biokovo. At Makarska the road winds up almost endlessly. We then approach different sites along the stretch and scan the hills and cliffs – almost without success. Miro is quite astonished to have a hard time to find the animals. In general it seems to be easy to find at least Chamois, but today we are not so lucky and have to wait until the evening. We then observe one female, 650 metres away. But that’s o.k. for a start, I guess I have to come again. 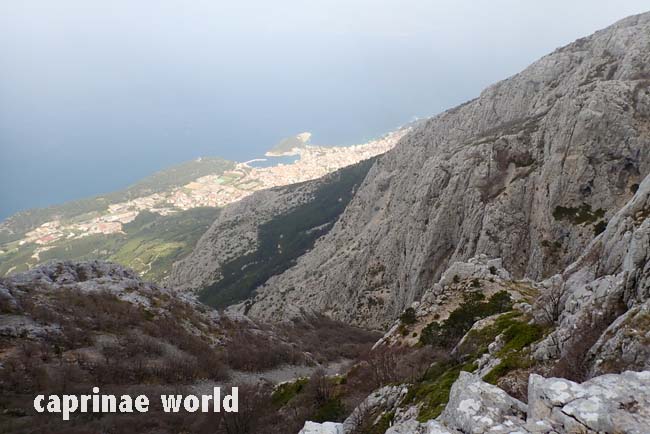 Chamois habitat at Biokovo. Makarska below. 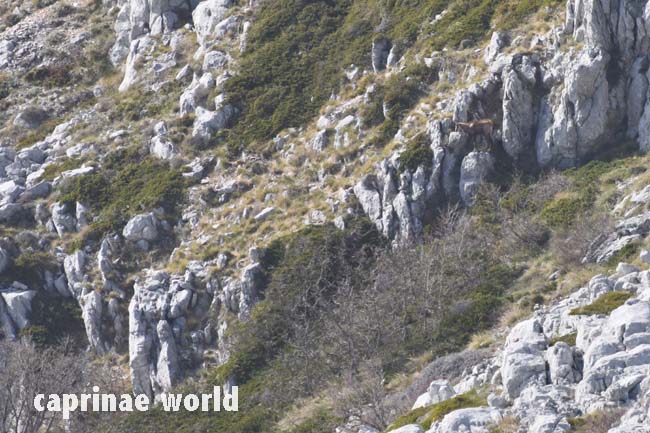 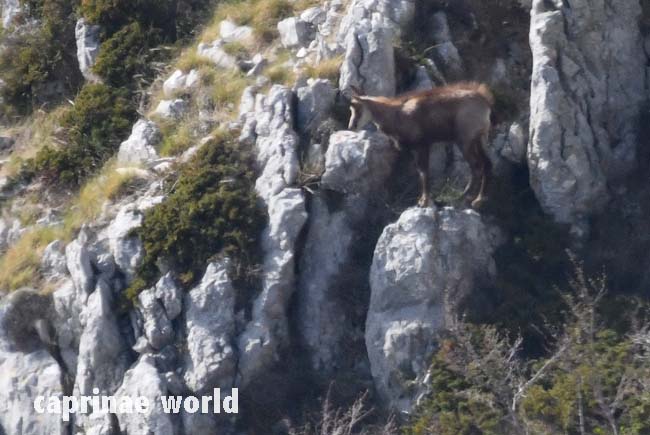 Balkan Chamois on lookout – close up

We have three hours in the morning to look for Mouflon in the western section of Mosor. Again, it could have been better, but at least we see two young rams. The younger one is almost black, a colour variation, which I have never seen before. The cemetry at Dubrava (43°29’53.3″N 16°38’32.8″E) seems to be the best place to get an overview of the Mouflon habitat. – We call it a day and go having breakfast. 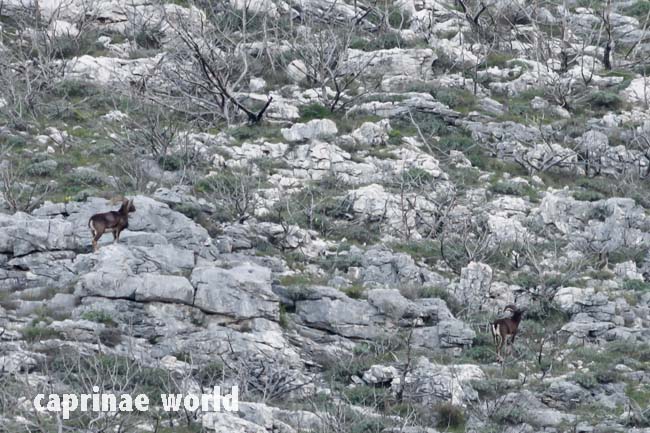 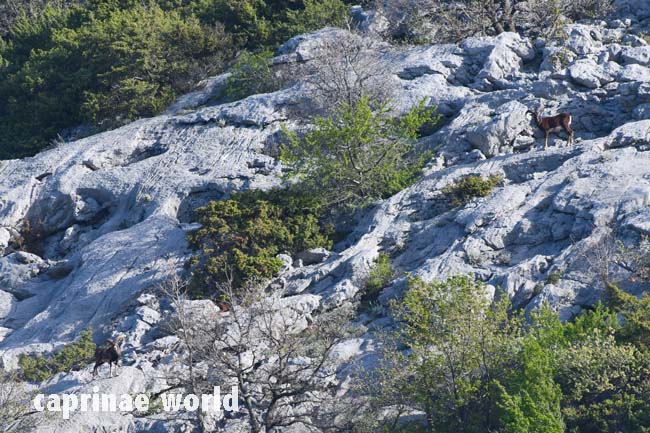 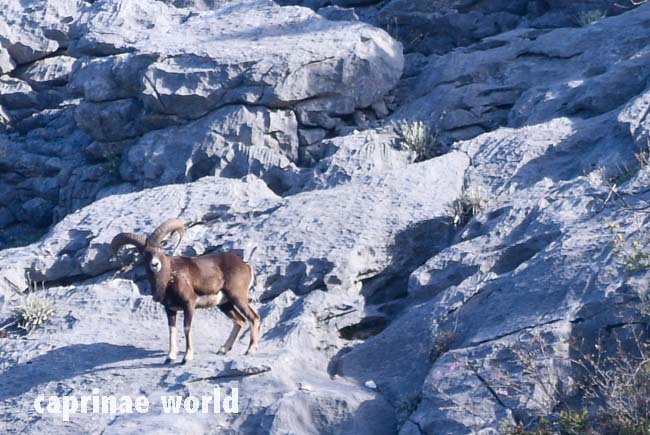 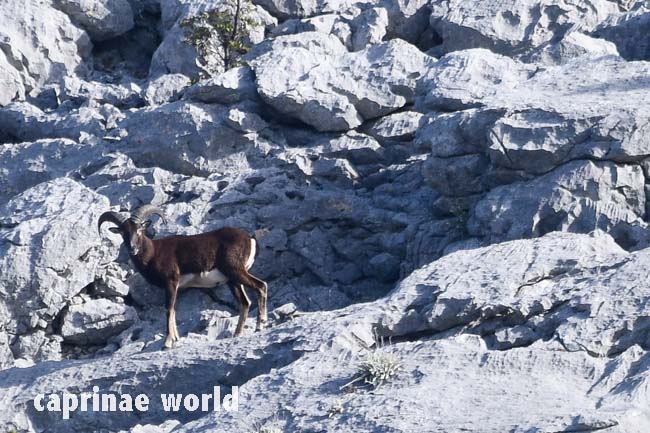 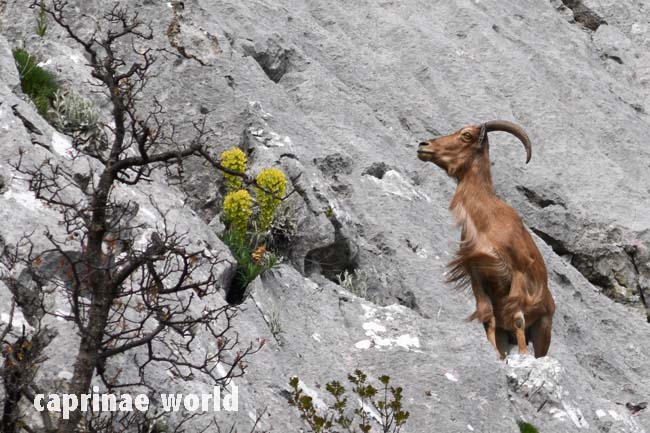