This subspecies occurs mainly in the Southwest of Pakistan, as well as in the south-eastern corner of Iran. 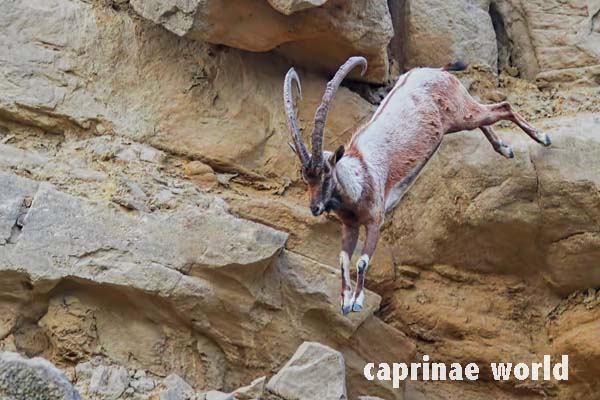 The present range of Sind Wild Goat in Pakistan is the Baluchistan Plateau and its foothills in south-western Pakistan. Populations are scattered on arid mountain ranges that are isolated by lowlands of southern Baluchistan and Sind. The range includes the low Mekran coastal range (District Gwadar), areas up to 3.250 m asl in the Koh-i-Maran range south of Quetta (District Kalat), and also the Kirthar range (Districts of Dadu and Las Bela) (Roberts 1977, Schaller 1977, Bollmann 1989). [6]

The western range limits and potential intergrading areas with Bezoar Wild Goat are unclear. It is suspected that the range of the Sindh Wild Goat crosses the border between Pakistan and Iran. There could conceivably be several zones of intergrading between Bezoar and Sindh Wild Goats (for instance, at the southeastern ends of the Zagros Range and the Kerman Mountains), especially in the mountainous areas of the Iranian Province of Sistan and Baluchestan (perhaps in the Siahankoh, as an extension of the Siahan Range of Pakistan). [2]

„The old male Sind ibex ((editor’s note: Sindh Wild Goat)) is one of the handsomest beasts in the world – the warm grey of his coat shading into dark-brown points, the chin beard and proud carriage of sweeping scimitar-like horns all combine to make a band of old bucks, poised in the rising sun on the jagged teeth of the crest of the Khirthar Range, a most memorable sight. C. H. Stockley, 1936“ [15] 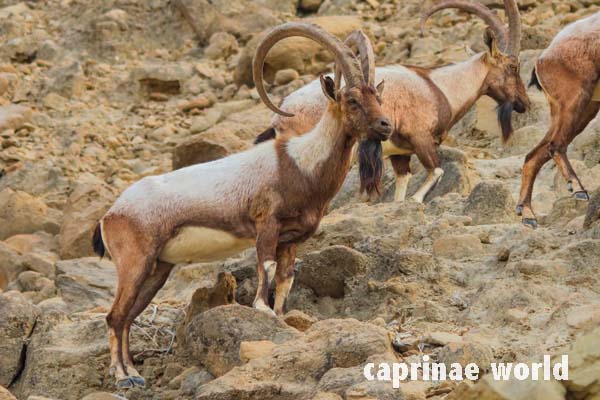 Sindh Wild Goats are rather stocky animals with thickset bodies and strong, sturdy limbs terminating in broad hooves. [2] There is some dispute concerning the size of adult males. But it seems to become apparent that Sindh Wild Goat are somewhat smaller than Bezoar Wild Goat.

Damm and Franco (2014) indicate the following figures – however sources are not quoted:

weight: up to 90 kg, sometimes more

Mature males are spectacularly beautiful with almost silver-white bodies, offset by a sooty-grey chest, throat and face. The extent of white hairs in the hind neck and body region of males increases with age. [2] 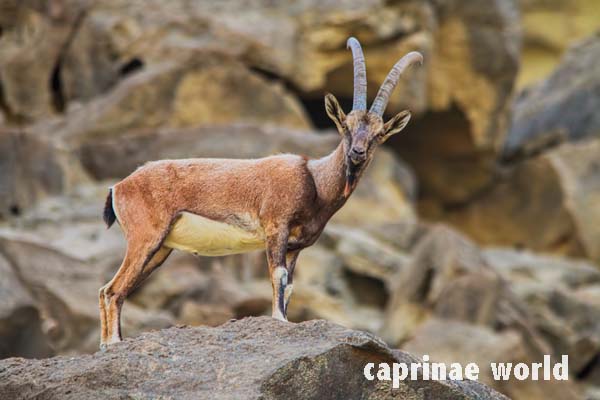 summer coat: short and coarse and even in adult males is more reddish-buff [2]

females and young males till their second winter: yellowish-brown varying to reddish-grey with a darker brown mid-dorsal line extending from between the shoulders to the base of the tail. [2] 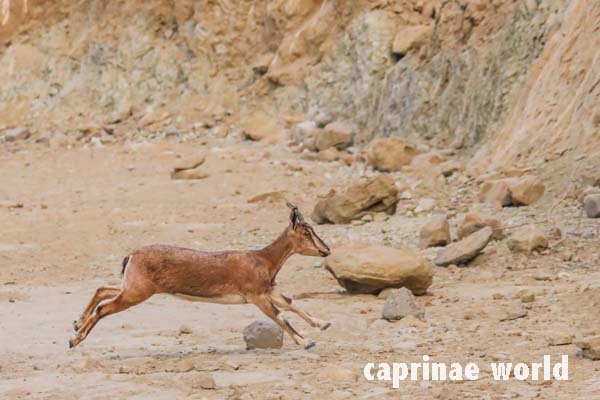 areas varying from black to deep chestnut-brown in old males: conspicuous stripe, running from the withers down the front of the shoulders and merging with the dark chest; side of belly; front of the shank extending around the fetlock; forepart of the face; beard [2]

chest: in specimens observed in Sindh there is often an extensive naked callous on the bottom of the sternum reminiscent of those seen in camels (Roberts 1967) [2]

limbs: The lower part of the hind- and forelegs is greyish-white with a conspicuous pattern of black hairs down the front of the shank extending around the fetlock. Knees on the forelegs are covered by naked grey callosities. [2]

beard: short [2]; beards of males shown in photos included in this chapter are definitely longer than beards of Alpine Ibex

regional differences: Specimens from Sindh-Kohistan (south-eastern part of the distribution range) tend to be paler and slenderer in build than the Balochistan (north-western part) population, with no underwool even in winter coat. [2]

The long scimitar-shaped horns are strongly keeled in front, sweeping upward and outward, often through an arc of up to 270°, with the tips generally diverging, but not as much as Bezoar horns. [2] If knobs on the front edge are less developed is not clear. Damm and Franco (2014) write that they are irregular and often even absent. [2] Valdez (1985) contradicts in writing that the supposed diagnostic characters – i. e. fewer knobs on the frontal horn keel – are not valid. [15]

Groves and Grubb (2011) found no evidence, based on skull or horn characters, for giving the Sindh Wild Goat a subspecies status or for dividing Capra aegagrus into subspecies at all. Some of their measurements are given below. [4]

Four male skulls from Sind were found to have a mean skull length of 261,2 mm, while a skull from the Makran (the intergrading zone of Bezoar Wild Goat and Sindh Wild Goat in Southeast Iran) had only 250 mm – unusually small. A female from Sind had 229 mm.

Horns from Sind and Kopet-Dagh average longer (1115 and 1125 mm) than those from the Caucasus and Turkey (923 mm), and their curve length is 162,7 per cent of their direct base-to-tip distance, compared with 149,8 per cent, but the ranges for the horn characters overlap considerably.

However a study by Zeder (2001) of a large collection of skulls from different regions of Iran found that there is a noticeable reduction in size, as represented by metacarpal distal breadth, from North to South, especially in the males. Groves and Grubb (2011) concluded: Further study of additional skulls would show either that those from the South Zagros (and presumably the Makran and Pakistan) are smaller than those from farther North, or else that the South populations have more gracile metapodials for the same general skull size. [4]

Sindh Wild Goats browse leaves on bushes as well as small shrubs and forbs. Many observers believe that they can exist indefinitely without drinking water. [2] ((no citation))

rutting season: starts mid-August and ends around beginning September; other observers put it between October and December [2]

rutting behaviour: When challenging one another males frequently rise on their hind legs, twisting their head to one side, before charging forward and clashing horns. [2]

lambing season: mid-January to end of March; very occasionally as late as mid-April (Website, Sindh Game Department); other observers put it from April to May [2]

Sindh Wild Goats are gregarious animals, if undisturbed, they will congregate in fairly large herds. The older rams associate with such herds, stay in male groups, often on the periphery. Group size depends upon the availability of forage but is smallest during the hot season and largest during monsoon or rut. Where disturbed, they ascend into inaccessible crags very early in the morning, emerging again just before dusk. During the hottest part of the year, they lie up during the day and graze much of the night. [2]

Iran: There is no information on the conservation and management of the subspecies for this country available. [2]

Pakistan: There is also no overall population estimate. Most wild goats survive in small inaccessible areas in isolated populations (Virk 1991). [6]

Within Pakistan most of the animals are in scattered populations on mountain ranges isolated from each other by lowlands. Consequently, they are at risk, especially because local people and nomadic tribes graze their domestic stock on most of the mountain ranges used by wild goats, and because poaching is still widespread. [6]

In Iran poaching, competition for food with domestic livestock, and disturbance and habitat loss from logging and land clearing, are major threats. [6]

This species is hunted mostly for food and sport, though the hides and other body parts may also be used. [6]

There are several reserves providing different levels of protection to Sindh Wild Goats in the country, but for many, no management plans have been developed and most lack even supervisory staff (Virk 1991).

Protected areas in Pakistan with Sind Wild Goat include:

1) no extension of irrigated cultivation,

2) reduction of livestock grazing by the locals and immigrants, and

The Dureji Game Management Area (DGMA), located 150 kilometres north of Karachi, is another stronghold of Sindh Wild Goat. The Bhootani familiy is the principal landowner and traditionally provided leadership and funding for protection of all wildlife in DGMA. In 1998 DGMA was formally recognized as a community-based sustainable-use hunting area. In April 2001 WWF-Pakistan in cooperation with USF&WS and Frisina et al. (2003) extrapolated a population estimate of 403 Sindh Wild Goat. Using Harris (1993) theory, a harvest quota of up to eight wild goat could be viable. [2] 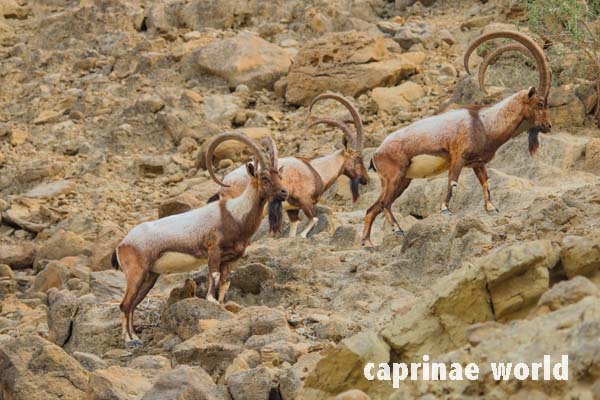