The Asiatic ibex (Capra sibirica) is one of the heavier members of the genus Capra. [3] The Asiatic ibex lives in Central Asia and occurs over a wider area and in greater numbers than any other ibex. [1,6] It is the most primitive ibex. [6] It has traditionally been treated as a subspecies of the Alpine ibex [1, 6] , but it is strongly distinct. [6] Fore example the winter coat in C. sibirica males often comes with a white saddle patch, the beard is longer and the orbits are more tubular than in C. ibex. [7] 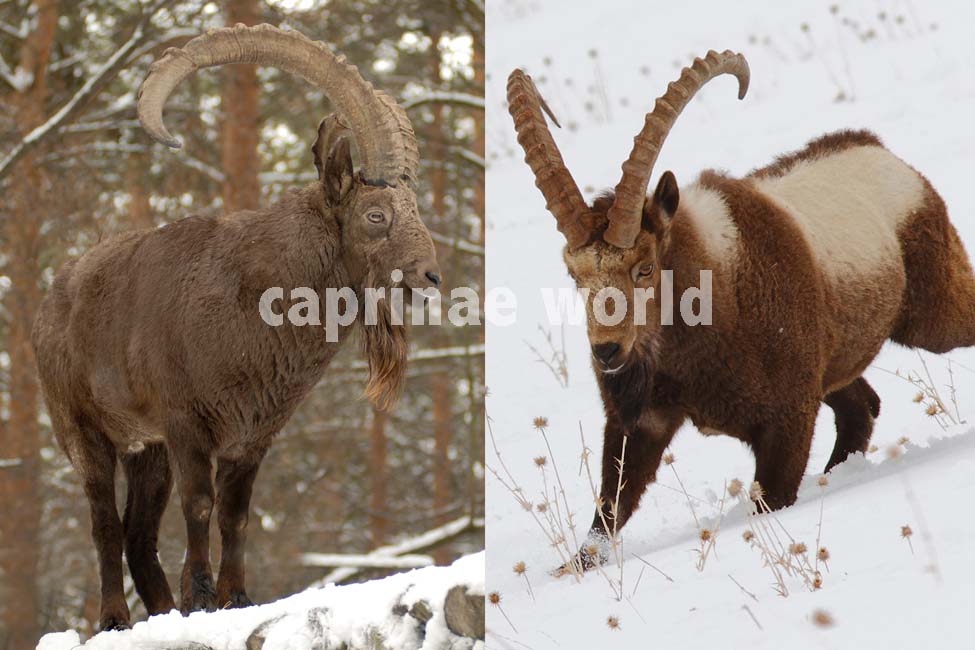 Basically there are two at-first-glance-distinguishable forms of Asiatic ibex: The ones WITH withish saddle and neck patch and those WITHOUT. The „patch form“ is probably more widespread. In specimens from southern Mongolia the whitish areas may be absent. [6] Ibex from the Altai can also lack them. [5]. – Left photo: Ralf Bürglin, Novosibirsk zoo; right photo: Samyak Kaninde,Spiti-Valley, Himachal Pradesh, India

introduced: In the United States several introduced populations of Altai ibex (under the name of Asian ibex) exist under free-ranging conditions in the Canadian River Canyon, New Mexico. [5] 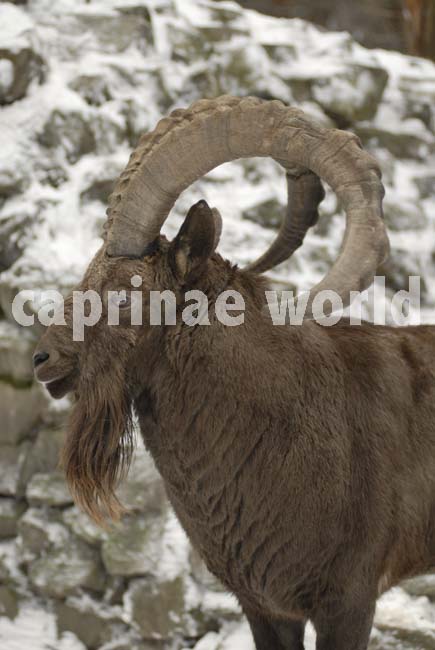 Coloration varies regionally. General winter coat in males, including the tail, beard, legs, and belly, is a shade of brown, ranging from pale to chocolate. A prominent whitish saddle patch is divided by a dark dorsal stripe. An additional whitish area can develop at the base of the back of the neck. [6] In old males saddle and neck patches can merge into one big patch. In specimens from southern Mongolia, the whitish areas may be absent. Females lack whitish coloration along the back. [6] 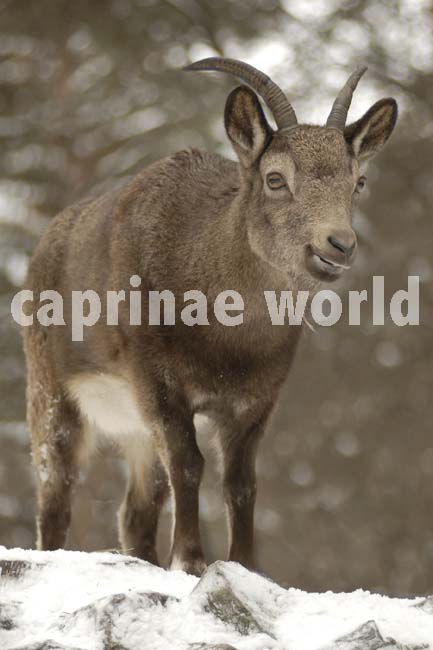 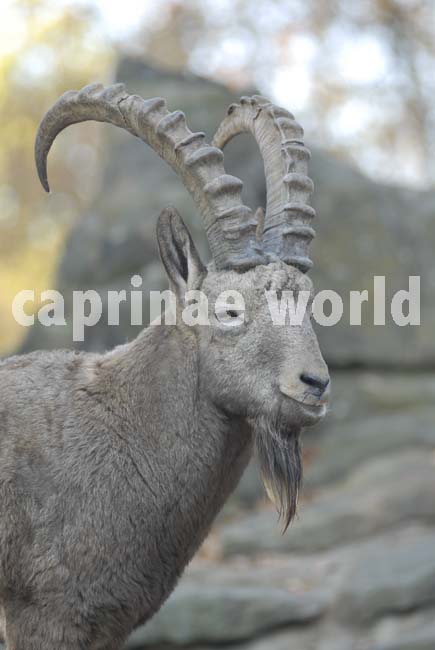 Unlike in Alpine ibex in Asiatic ibexes both frontal edges of the horns are sharp. Photo: Ralf Bürglin, Berlin Zoo 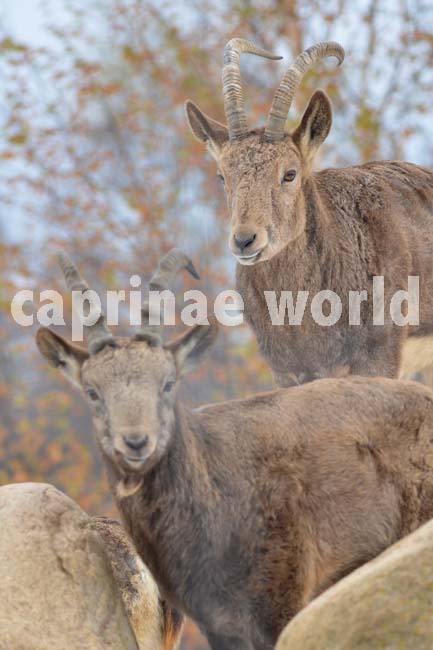 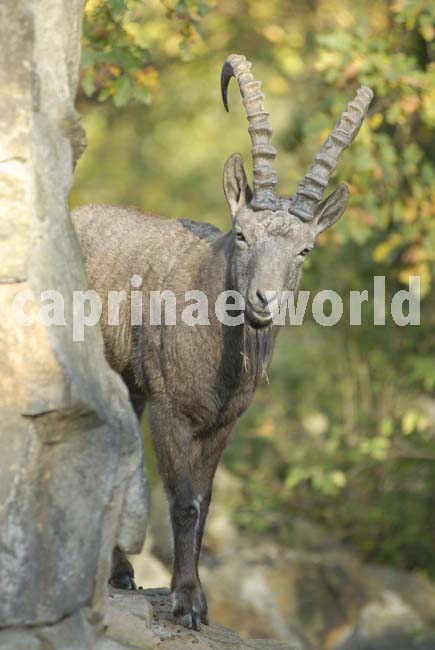 Asiatic ibex. Note there is no white on the front sides of the legs as for example in the Nubian ibex. Photo: Ralf Bürglin, Zoo Berlin 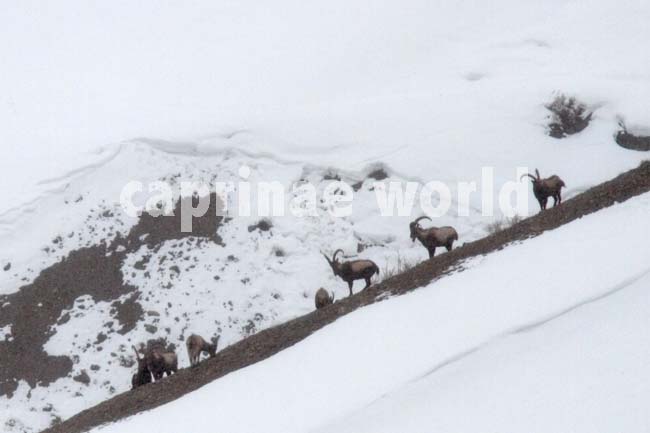 The Asiatic ibex occurs at 700 metres above sea level in low, rocky hills in the Gobi Desert and up to 6.700 metres in the Himalayas in rocky, precipitous terrain interspersed with cliffs, deep valleys, scree, and rocky outcrops. They forage in alpine meadows, gentle slopes, and even wet meadows of mountain streams, usually staying close to precipitous escape terrain. They avoid areas with deep snow and tall vegetation, but will occasionally enter forests during heavy snow. [6]

The diet consists primarily of grases in summer and browse in winter. But diets vary depending on plant species‘ availability. Males can eat up to 16 kilograms and females up to 10 kilograms daily. They frequent salt licks when available. [6] 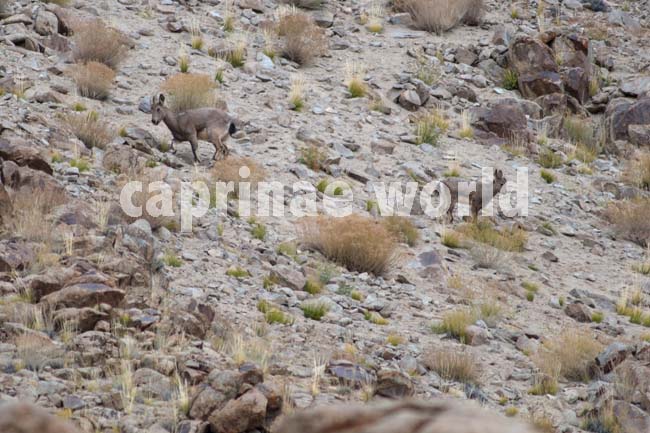 Himalayan ibex in their habitat in Ladakh, India. Note the sparse vegetation in this dry environment. Photo: Ralf Bürglin

Other mortality factors: Die-offs due to disease, such as pleuropneumonia, can occur; about 25-35 per cent of kids survive their first year, survival can be lower during harsh winters. [6] 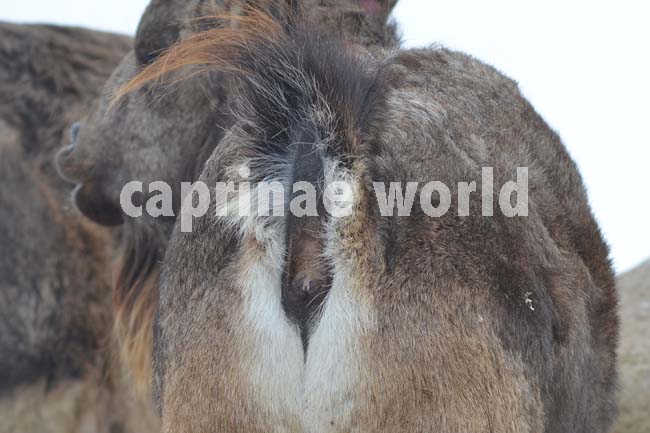 time of births: in northern areas April-early May; in the Himalayas and Tian Shan late May-early June; in the Pamirs in June 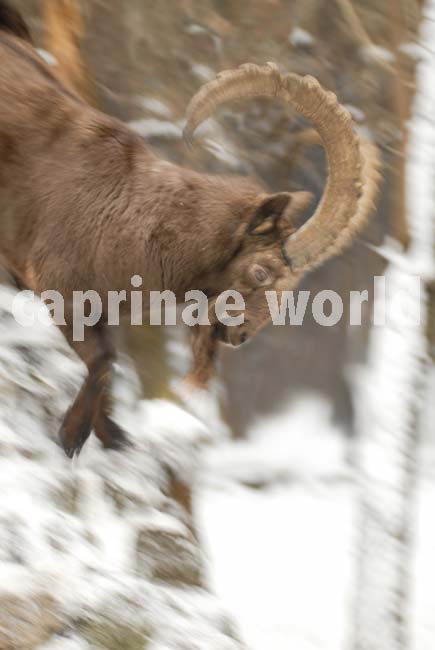 Daily movements in the Himalayas were less than 300 metres and the longest movements seen were 3 to 4 kilometres. Seasonal movements and migrations vary from 40 to 100 kilometres, with an altitudinal shift of 700 to 2.000 metres. Movements in autumn commence after heavy snow. Movements can also be triggered by livestock, hunting or insects. During winter Asiatic Ibex descend to steep, grassy, south-facing slopes. Herd size depends on population size, with means ranging from 5 to 29 animals. Mixed group herds have as many as 100 to 200 animals. During autumn, 80-96 per cent of Asiatic ibexes are in mixed herds. This decreases to 18 per cent in summer. Males form seperate herds in May to July and rejoin female herds in autumn. Both males and females probably form linear social hierarchies. [6]

This species is listed as „least concern“ in view of its wide distribution, presumed large population, and because, although some populations are likely to be in decline, overall this is probably much less than the rate required to qualify for listing in a more threatened category. [1] Asiatic ibexes have been extirpated over large areas, especially in war-devastated Afghanistan. 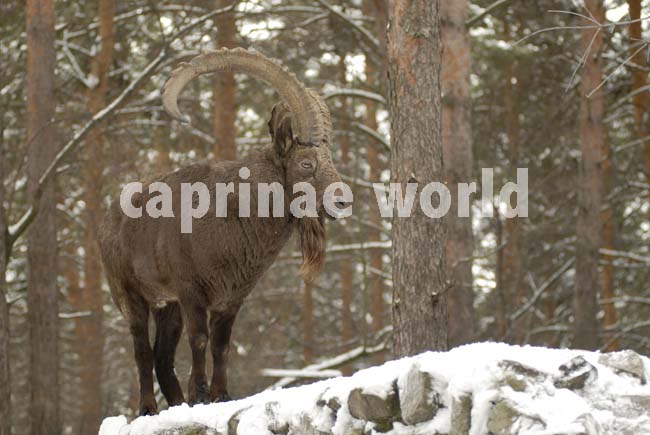 Asiatic ibex form Novosibirsk zoo – without saddle and neck patches. It is noticeable that Asiatic Ibexes in zoos generally come without patches. There could be two reasons for this: 1. All Asiatic Ibex in zoos are descendants of ibexes from areas, where animals occur without white patches. Or 2. Asiatic Ibex in zoos have been mixed up with Alpine ibex. The Asiatic ibex was formerly treated as „Capra ibex“ like the Alpine ibex. Through hybridisation the white patches could have been lost. Photo: Ralf Bürglin 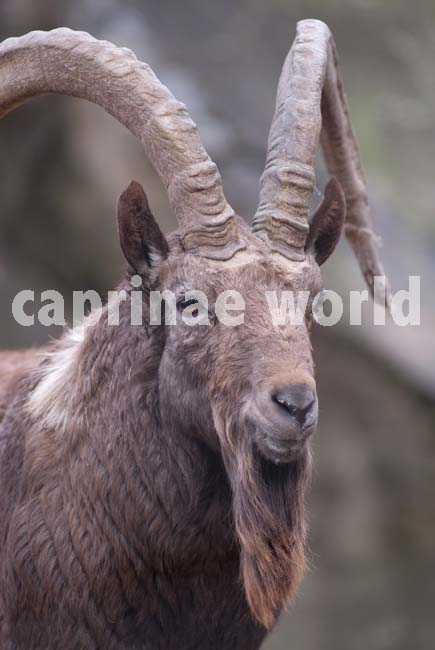 Asiatic ibex from Wuppertal Zoo, Germany. This is the only zoo specimen I could find that shows a whitish patch on the back of the neck. Photo: Ralf Bürglin

Asiatic ibex may be hunted legally in Mongolia and Russia. In Russia, however, large numbers are shot illegally. In Mongolia illegal and unsustainable hunting remains a threat. China put a moratorium on all hunting in 2006. In Afghanistan and India ibex hunting is illegal. [5] Trophy hunting programs in Kyrgyzstan, Tajikistan, and Pakistan produce only a few animals a year. [1]

Sustainable, community based and well-regulated trophy hunting for Himalayan Ibex is available in several hunting areas in Pakistan. There trophy hunting has little to no effect on population dynamics, but generates healthy economic benefits for communities. [5]

[2] Smith, Andrew T. and Xie, Yan, 2008: A Guide to the mammals of China. Princeton University Press