Imagine! There are animals living out there on our planet the size of goats, and hardly anybody knows them, because we are not able to depict them.

I am not talking about species that have not yet detected by science. I mean big mammals that have been described by zoologists, but nobody ever has managed to clearly visualise them. Good illustrations are missing or photos and names are mixed up. But without proper depictions these species remain animals without identity.

Why are we not able to visualise certain animal species clearly?

a) People are just not interested in some species – and/or

c) some of the species are extremely rare and/or shy.

One has to consider that scientific names for species do change. New species can be designated on basis of existing species. These new species have to be labeled with new names. Hence corresponding images can be found with differing names.

An example of excessive species name replacement and extensions has taken place in the genus Nemorhaedus. Mead (1989) gives an overview. 27 years ago he assumed that there is only one species of goral: Nemorhaedus goral.

People today mix up the species names. Presumably first of all because of the name changes, but there are other reasons too. I have compared 21.-century-publications that deal with the classifications of gorals.

For example IUCN uses the name „Chinese Goral“ for two different species: Naemorhedus griseus and N. caudatus (iucnredlist.org, 2016/04).  Groves and Grubb (2011) and Wilson and Mittermeier (2011) have chosen the term „Burmese goral“ for N. evansi, but Damm and Franco (2014) use „Burmese Red Goral“ for N. baileyi. Matschei (2012) uses Naemorhedus goral arnouxianius for the Chinese Goral (N. griseus) – a species-synonym from 1888. Hence an inexperienced reader could take his Central China goral for a Himalayan Goral. Matschei also calls the Eastern Himalayan Goral synonymously „Kaschmir-Goral“, despite the fact that Kashmir lies in the western Himalayas. Damm and Franco (2014) mix up N. b. baileyi and N. b. cranbrooki. N. b. baileyi is the Tibetan Red Goral; N. b. cranbrooki is the Burmese Red Goral. If you look at less scientific sources, the confusion is worse.

According to the name confusion in scientific publications, there is also no consistency concerning the labeling of species in zoos. I have checked information boards at various goral enclosures. The following table lists species names from zoos and what it should be referring to agreed scientific state of knowledge.

(* The right spelling of the genus name is still a subject of debate. Groves and Grubb, 2011, write: „The spelling of the name Nemorhaedus is questionable. Corbet & Hill (1992:270) wrote: ‚Naemorhedus Smith, 1827 … Subsequent variation of spelling such as the etymologically correct Nemorhaedus are unjustified emendations; there is no evidence of an error in the original publication.‘ Pending a submission to the ICZN (in view of the use of several different spellings in the literature), we will retain the familiar spelling, but it should be noted that it is not technically beyond reproach.“)

It becomes clear, that apart from misspellings in some cases outdated names are used. As a consequence visitors in Shanghai Zoo could take a Chinese goral for a Himalayan goral. Or at Tallinn Zoo a Chinese Goral could be regarded as a Long-tailed Goral. 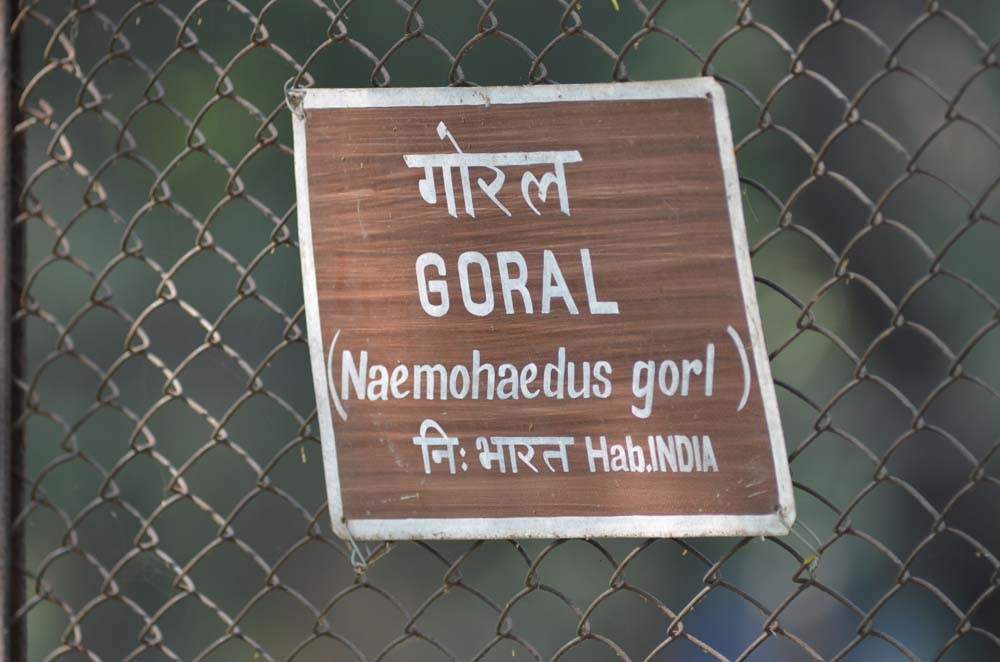 Info board on goral enclosure at National Zoological Park Delhi

Visitors at zoos take pictures of animals and label them according to the information boards, put them online or give them to photo databases. As a result the labeling of goral photos is mixed up, no matter where you look: wikipedia, zooinstitutes.com, ultimateungulate.com … 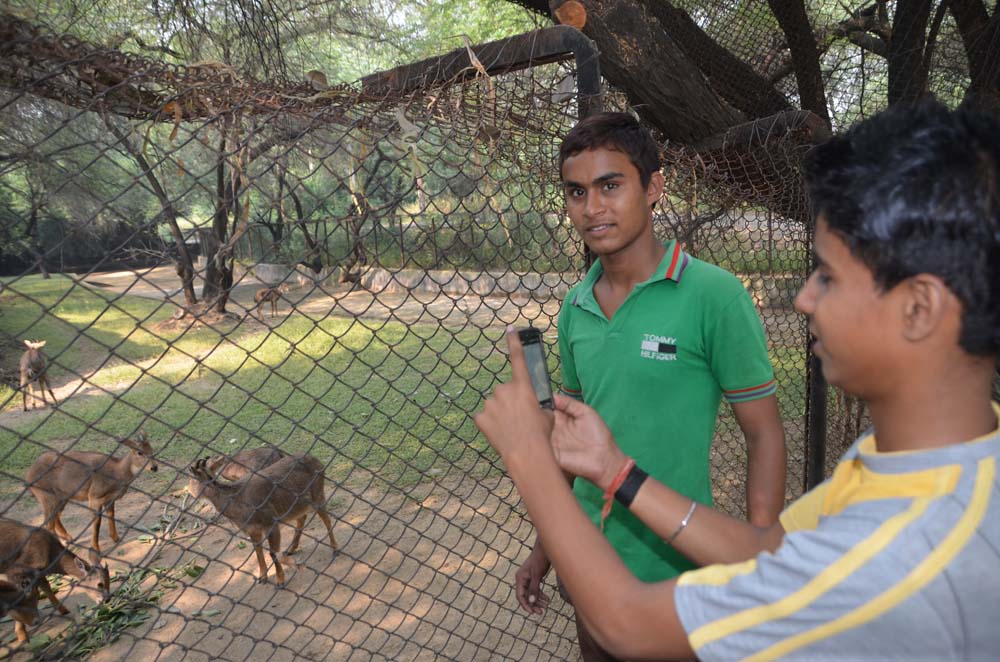 3. We use images to describe species, which do not qualify

In most caprinae species morphologically relevant differences to distinguish closely related species or subspecies show up clearly only in mature males. In immature males, females and most of all in young these differences are not or less developed. Hence it makes no sence to use images of these individuals to depict species. But people do. 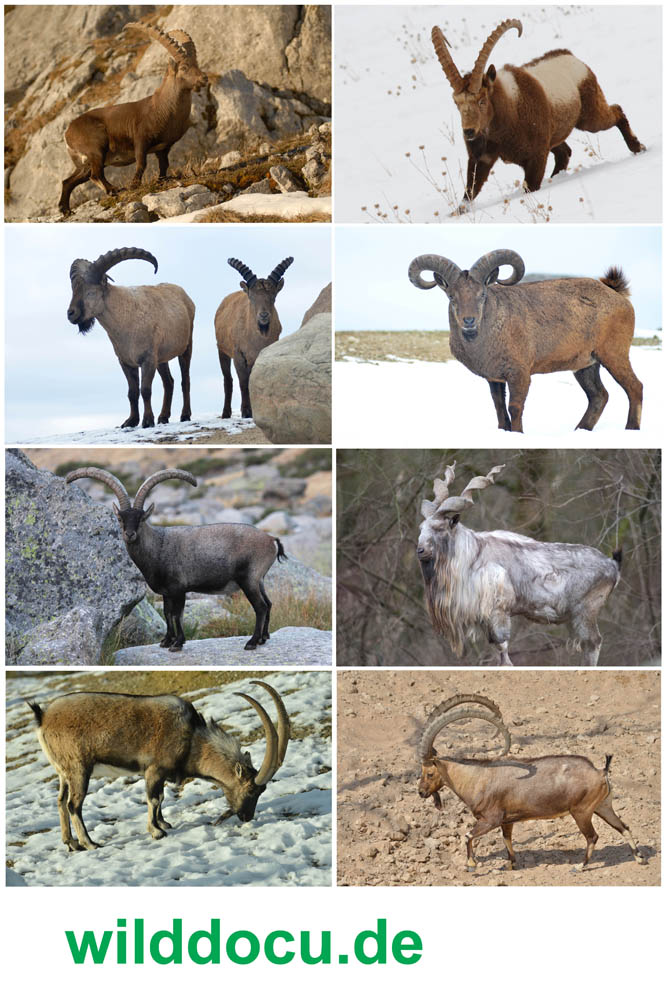 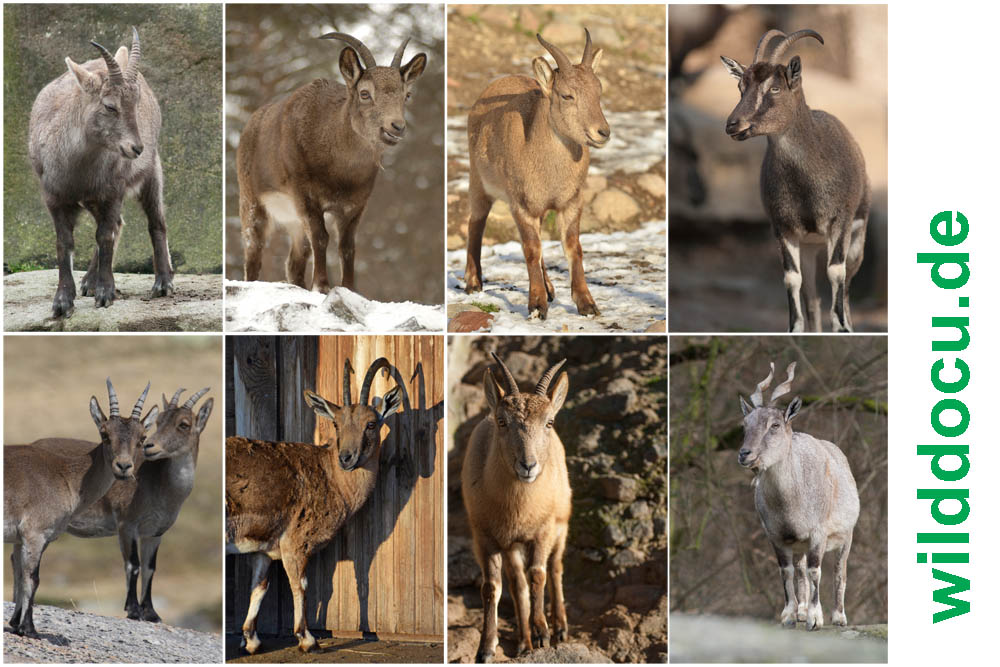 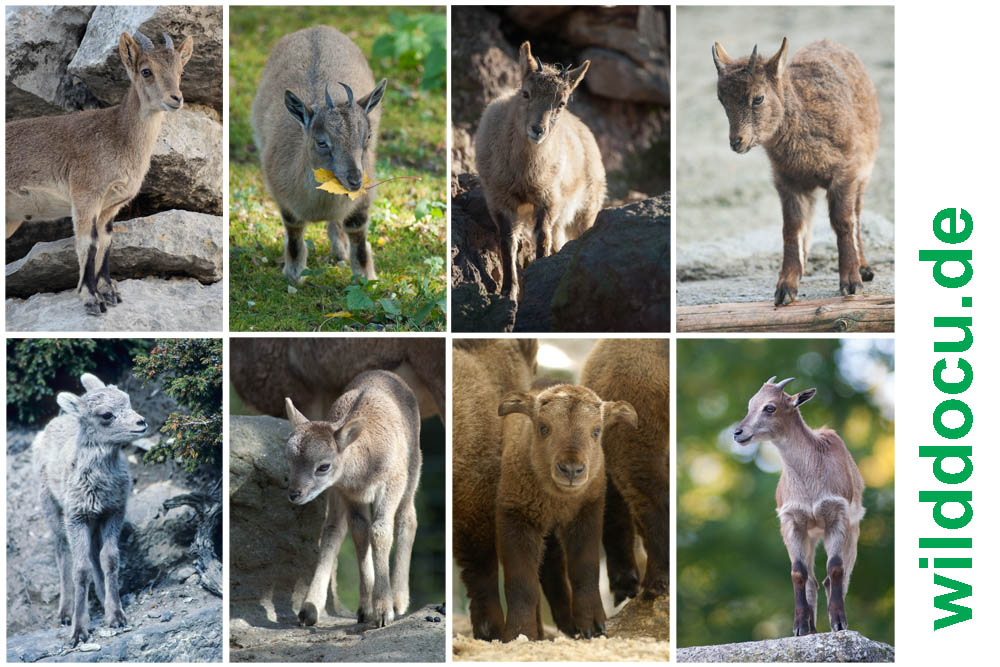 Drawings are by far the best means of showing differences between species/phenotypes, because the artist has the opportunity to idealize depictions. But on the other side artists depend on specimens, live animals or photographs. So the work of artists can only be as good as their references. 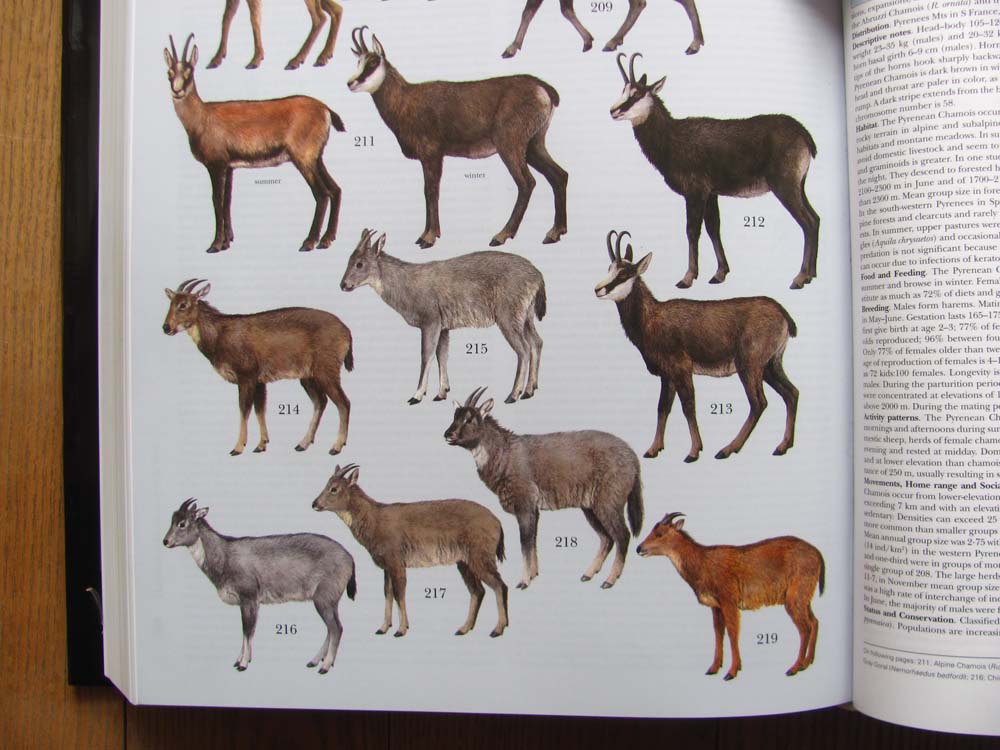 The six Goral species as found in the „Handbook of the mammals of the world“ – Wilson and Mittermeier, 2011 („211“ to „213“ are chamois). Some viewers find it hard to note the external differences in these species.

If we want to show animal diversity in detail, we have to look for appropriate animals and use standardised sets of photographs for related phenotypes! Ideally we should also take the photos from the same angle, with the same camera settings, same light conditions, at the same time of year. 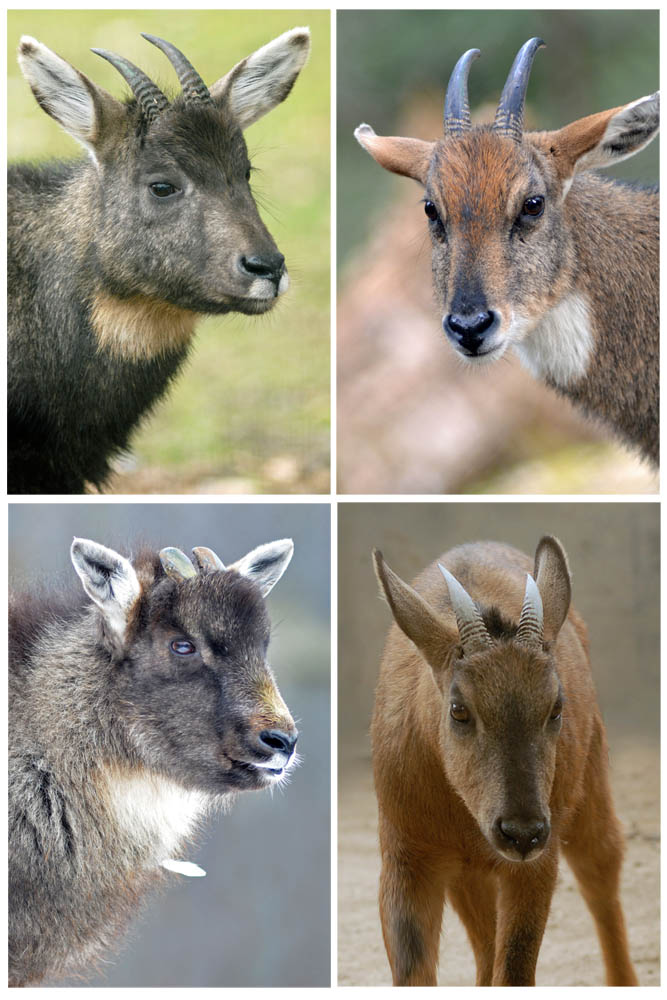 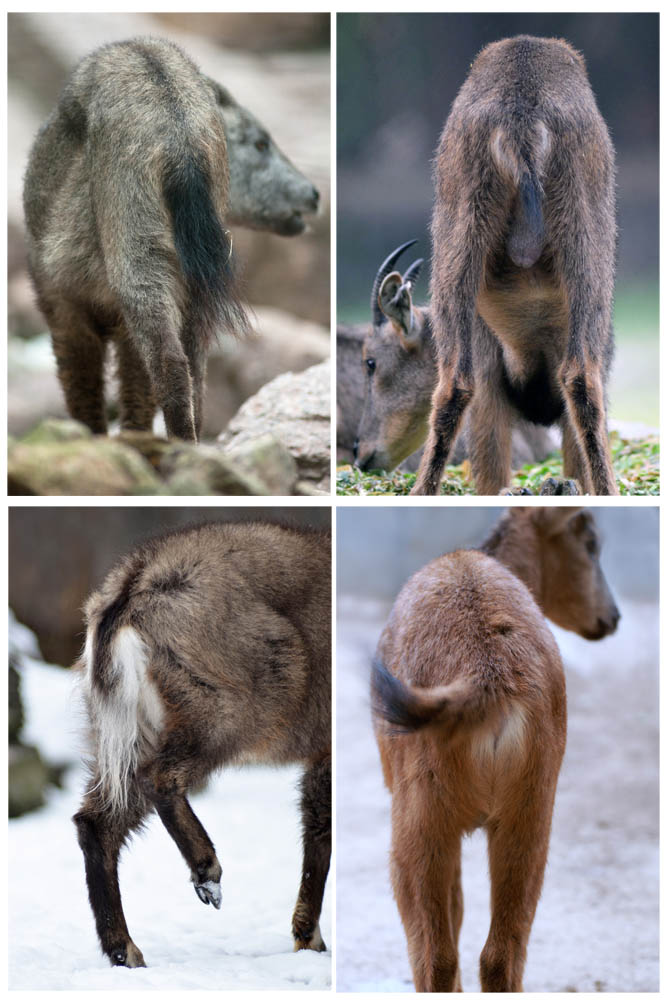 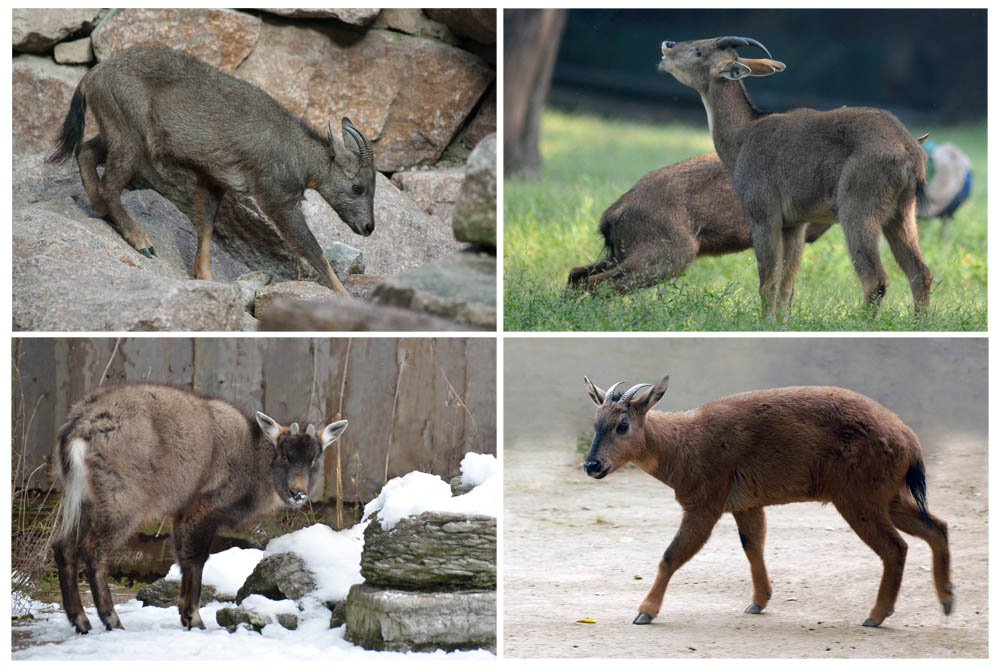 With the right animals in place and appropriate camera settings we get the photos, that we need.

Let’s go exploring and gather more appropriate photos to show how colourful and diverse our mammal world is! Good photos are also a prerequisite for successful conservation work.