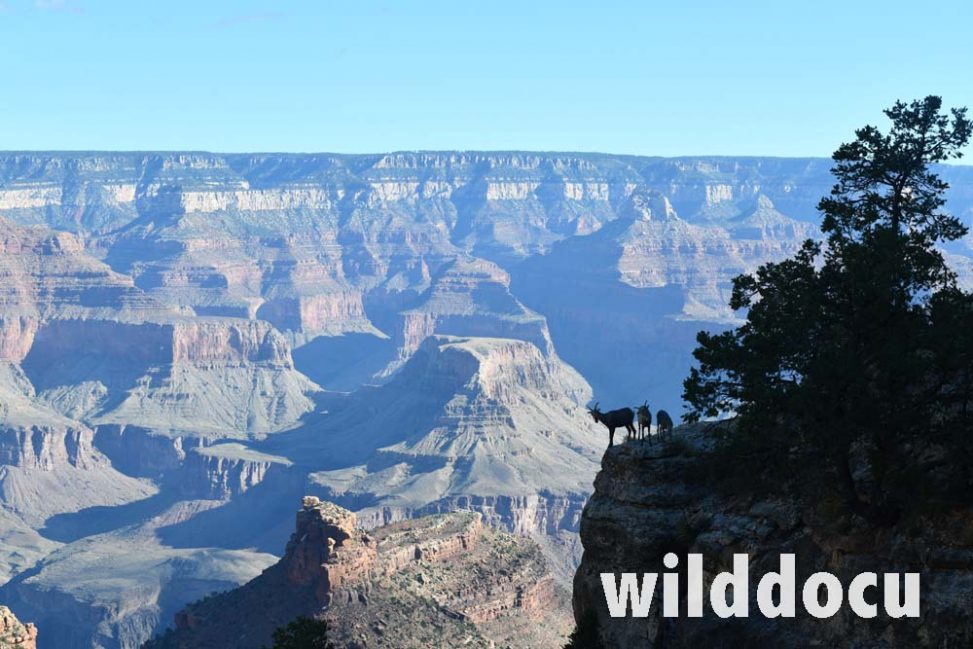 During September 2019 I visited the United States to attend the 7th World Mountain Ungulate Conference. Before and after I had a total of 10 days to look for wildlife. This time was mainly dedicated for the search and documentation of caprinae species. But I wanted to make a compromise between finding my target species / subspecies – Rocky Mountain Bighorn Sheep, Desert Bighorn Sheep, Sierra Nevada Bighorn Sheep – and visit some of the most famous National Parks in the US Southwest.

Coming from Salt Lake City I arrive in the afternoon. I get some information in the visitor center and buy bear spray. Only a few hours are left for observing wildlife. I run into two Mule Deer stags at Gros Ventre campground and several Pronghorns on Mormon Row Road. At the end of that road are the remains of a homestead. Some Mountain Bluebirds use the property today.

There are several of these mice, all very shy. This one doesn’t pay attention to my presence, because it is busily gnawing on a dead frog.

Along a small creek near the homestead I notice striped sedges and eventually a rodent. Going by its dark colour, short tail, large size, habitat and distribution, I believe it is a Water Vole.

Early next morning I take a short walk around String Lake.

According to distribution it can only be that species, but upperparts appear pretty greyish – as in a Chickaree.

I see this species (lower left corner) during breakfast at Jackson Lake Lodge. When it suddenly ran off, its waving tail made it determinable. Sandhill Cranes were also around in these meadows.

Soon after breakfast I arrive in the world’s first National Park. I have one day to explore it and discover its great wildlife.

For Mount Washburn I have scheduled a bit more time – enough to hike to the top. It is probably the best place to see Rocky Mountain Bighorn Sheep in Yellowstone NP. And in September the alpine meadows are supposed to be also good for Grizzly.

More images of this subspecies are included in my Rocky Mountain Bighorn Sheep chapter.

And what the Grizzly concerns I really try hard and scan the slopes repeatedly with my binoculars. And eventually it pays off:

And then, just minutes after being on the road again after Mt. Washburn, there’s a Black Bear crossing the road, giving me just enough time for a click.

The last mammals of the day is a herd of elk in Mammoth in somebody’s backyard. The next morning I arrive in Bozeman, Montana, to attend the conference. Great folks there (Homo sapiens), but rather domesticated. No wildlife. But on the forth day we go on a field trip, again to Yellowstone. I add Mountain Coyote and Mountain Goat on my trip list. After our return to Bozeman and a shandy I set out for a 1400-km-trip to California. Next evening I reach Lee Vining on the eastern foot of the Sierras.

The next day is planned for a day trip to Mono Pass: Sierra Nevada Bighorn Sheep habitat! And there is lots to discover on the way:

… and eventually it is not difficult to find the sheep.

I photograph these three females in a herd of 14 around Mono Pass (3231 m). Mostly it is difficult to see subspeciesspecific differences in caprinae females in the field. It is different with Sierra Nevada Bighorn Sheep: The wide flaring horns (tip-to-tip distance) are conspicuous. Compare with Rocky Mountain Sheep above! More photos

Next morning I am on my way to Cottonwood Lakes, further south in the Sierras.

I choose this site because it is supposed to be good for male Sierra Nevada Bighorn Sheep during the summer. I plan three days: One to hike in. One to explore the area. One to get out. It’s worth staying much longer.

This big male from west of Cottonwood Lakes has a very wolfish head!

I contact Mark Chappell, Professor (Emeritus), who did his phd on chipmunks. He believes it’s either Lodgepole Chipmunk or Yellow-pine Chipmunk.

On the second day I climb up to New Army Pass, hike to Soldier Lake and come down again via Old Army Pass. A spectacular day, but unfortunately I miss my sheep. Later I am told by Sierra Bighorn field biologist John Wehausen that he „also saw no live sheep on his route (through the Cottonwood Lakes area / about the same time), which is probably the first time that has ever occurred“.

On the third day I take down my tent early and rush to the parking lot, where I arrive around 10 am. In the afternoon I stand amidst Joshua Trees in the desert.

The Mojave Desert is one of the places, where I expect to find Desert Bighorn Sheep.

I enter the preserve and it literally takes me one minute to have an encounter with the bird of my tv-childhood: the roadrunner.

A first one behaves like I expected it: … meep meep – and gone. But a second specimen that comes trotting along is very cooperative and photogenic …

And there are mammals too:

At night I observe Kangaroo Rats crossing the road. I see more on the dirt road sections – be it that they resemble more natural Kangaroo Rat habitat or because I drive slower and therefore see more.

I think it is this species. I go by large size and distribution. Desert Kangaroo Rat is paler.

After sunset I go on a half-hour night walk near Hole-in-the-Wall information center. The only animal I encounter is a Tarantula.

I am very happy with my encounters in the desert – although I don’t get to see Bighorns. Locals tell me they are very rare in the area. Then I have to hurry, because I want to be at Grand Canyon the next morning.

… and it is really worth to have only three hours of sleep. I arrive at Grand Canyon village, get one of the last parking lots (later you have to take a shuttle bus to reach the village) and hike just a few meters down Bright Angel Trail. And here they are: Desert Bighorn Sheep – in front of a backdrop that can’t be topped:

If you go by distribution, it can only be that species. But the salt-and-pepper structure of the back in this specimem reminds of California Ground Squirrel (Citellus beecheyi).

According to Peterson Fuild Guides / mammals the Cliff Chipmunk has „indistinct dark stripes down middle of back along sides“.

In the Least Chipmunk stripes continue to base of tail. The Colorado Chipmunk has bright colours and ears are blackish in front. Uinta C. is similar to Colorado C.

It is the only species in the family Aegithalidae found in the New World, and the only member of the genus Psaltriparus. In North America, it is referred to simply as „bushtit“.

At dusk I enjoy sitting at the rim, listening to crickets and watching bats.

According to the National Park Service Grand Canyon National Park is home to one of the highest bat diversities anywhere in the United States, providing habitat to 22 species of bats.

Along the canyon’s rim, the Western Pipistrelle (Pipistrellus hesperus) is known to occur. Just going by „small size“ and „pale coloration“ (Peterson Field Guide / mammals) I dare to tie myself down to this species.

Eventually I have to move on. A small lagomorph appears at the road side. Going by the very small size, short ears and distribution, I reckon it to be a Mountain Cottontail (Sylvilagus nuttallii).

According to The National Park Service Desert Cottontail occur also in Grand Canyon National Park, but there ears are longer.

The next morning I arrive at:

I try to find more sheep: At the location shown above in Arches NP, also in Canyonlands National Park and on the way to Salt Lake City at Green River. The subspecies seems to avoid me at these locations. But never mind, I got all I wanted and can enjoy the landscapes and various other wildlife species.