The scientific name refers to its ornate appearance. The Italians simply call it „the most beautiful chamois in the world“. Looking at the contrasting winter pelage and the impressive horns, one can only agree. 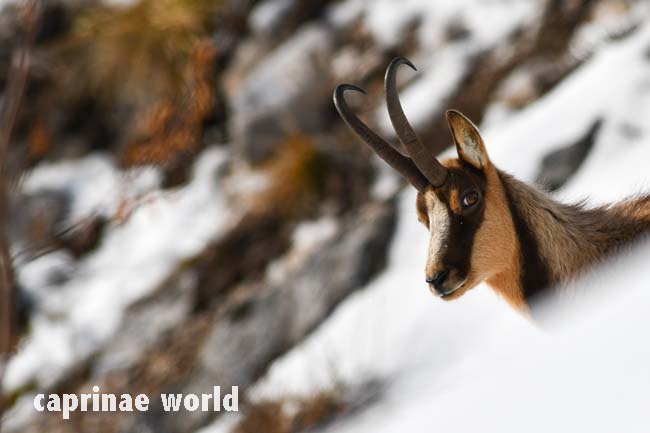 Italian: Camoscio appeninico, Camoscio d’Abruzzo [1, 2] – (Note that the Italian spelling for the Apennine Mountains is „Appennini“.)

The subspecies name „ornata“ derives from the ornate winter coat. [2]

The Abruzzi Chamois has a low level of genetic variability, probably due to population bottlenecks and permanence of low numbers. It is more closely related to the Pyrenean Chamois than to the Alpine Chamois. Monotypic [16]

The three Southern Chamois subspecies are differentiated from the seven subspecies of Alpine Chamois by cranial (scull) features, as well as a different courtship behaviour and pelage pattern (Lovari and Scala 1980). [2]

According to the latter the Apeninne Chamois also has much larger horns than the other two Southern Chamois subspecies. However, the skull size of the Apennine Chamois is smaller than the Pyrenean Chamois in almost all aspects, although, in Pyrenean Chamois and Cantabrian Chamois, the larger scull sits on a smaller body (Lovari and Scala 1980). [2]

Scala & Lovari (1984) statistically evaluated skull and horn measurements, comparing sexually mature male Abruzzo Chamois (Rupicapra rupicapra ornata) and Pyrenean Chamois (R. r. pyrenaica). They could show that these taxa differ significantly in the length of the frontomaxillary fontanelle, the frontal length of the horns, their height and anteroposterior and transverse basal diameters. In particular, the fontanelle length discriminates the two taxa very clearly [5]: 16-21,6 mm in Apennine Chamois, 3-10 mm in Pyrenean Chamois [4]. Thus, the sub-specific separation of ornata from pyrenaica appears to be fully justified morphometrically. [5]

The statistically significant horn variables (n.1-2-3-4), although distinguishing well the two groups, provide a less clearcut separation of ornata from pyrenaica than the fontanelle length alone. Yet it may be stated that horns provide a less satisfactory taxonomical differentiation than skull measurements, as the former are more readily subjected to epigenetic variation (Geist, 1966; Schaller 1977:23). [5] 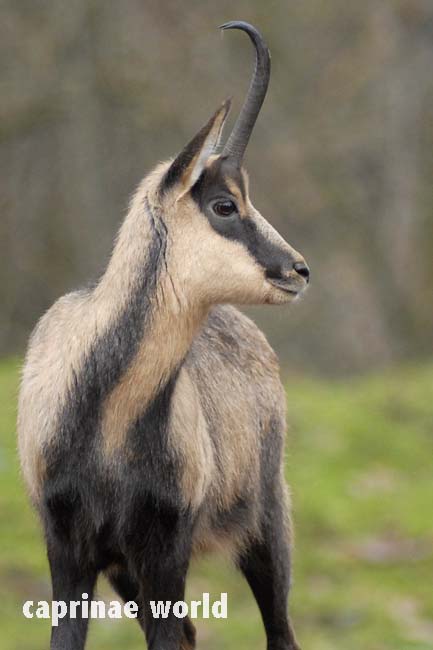 The Apennine Chamois is endemic to the Apennines in Central Italy [16].

It occurs in four to five small subpopulations:

The populations at Majella and Gran Sasso derive from founder stocks from the Camosciara area in Abruzzo National Park (Apollonio 2010). The population at Monte Sibillini is also based on 30 translocated animals. [2]

The winter and summer pelage of the Apennine Chamois are strikingly different in appearance. The strong facial markings remain seasonally unchanged [2] – except during moult in spring. 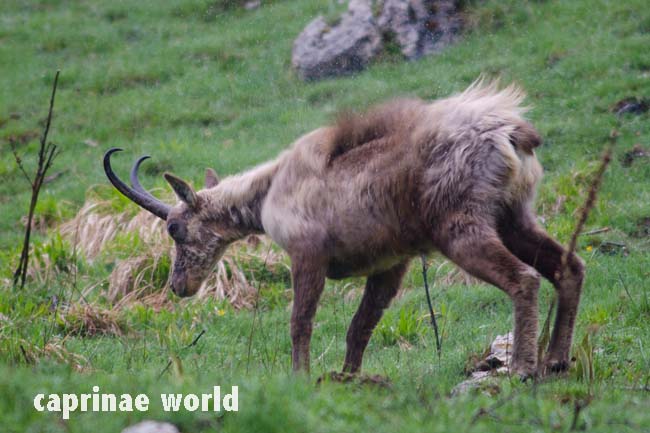 Apennine Chamois male at the end of May during moult shaking off raindrops. Photo: Bürglin / Abruzzo National Park, Italy 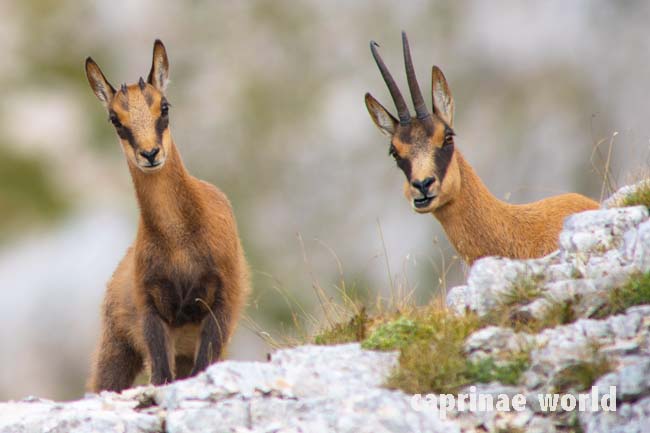 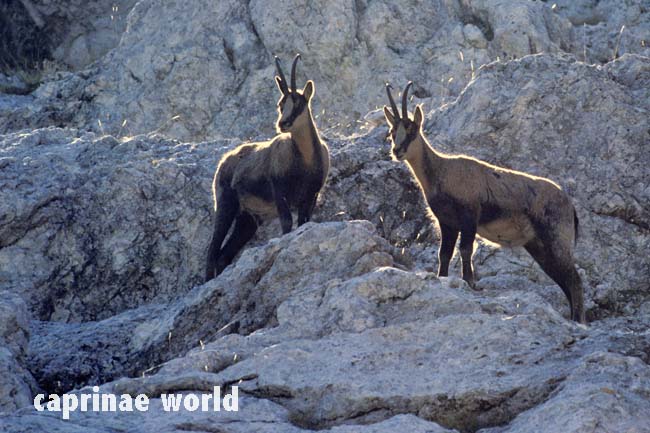 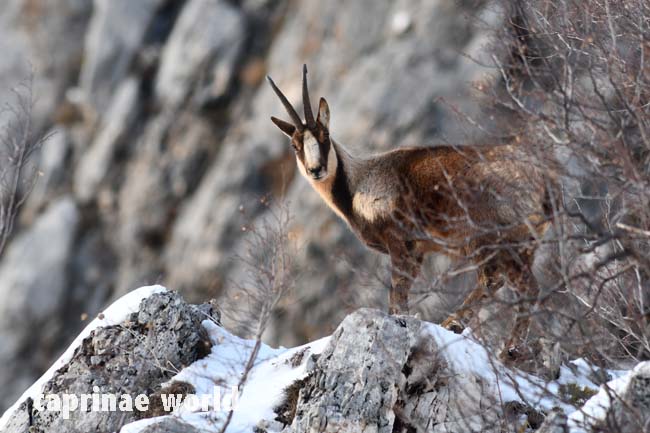 winter coat: dark blackish-brown ground colour with a large creamy-white or light brown patch on each side of the rump and hindquarters. A large creamy-white patch runs on each side of the neck, shoulders and forequarters downward nearly to the brisket, separated along the side of the neck by a dark line extending down and forward from the base of each ear to join above the brisket. Winter guard hairs: 10 to 20 cm long, growing over a dense wooly underfur. [2]

face: white front to the face and muzzle, bordered on both sides by a broad black stripe running from the horn and ear base to the nostril [2] 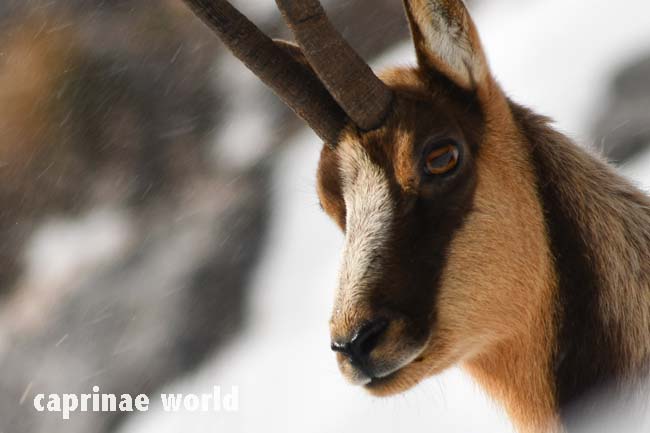 Portrait of a male Apennin Chamois during a storm: Even the face itself is very colourful. Photo: Bürglin 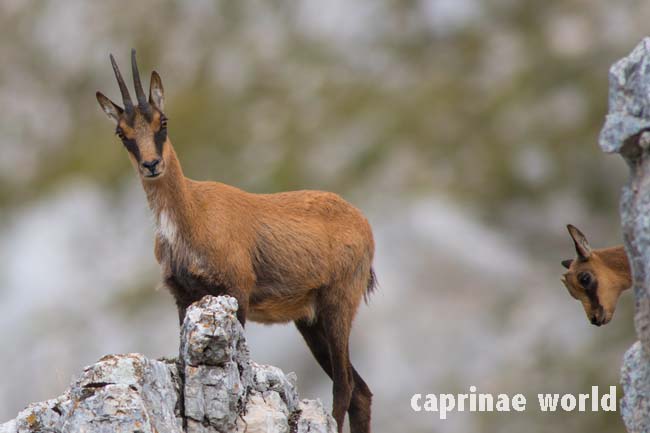 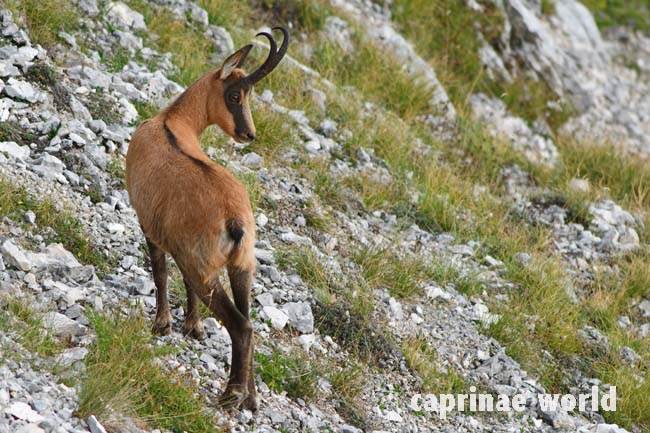 stripe along spine: black [2]; in winter and summer coat 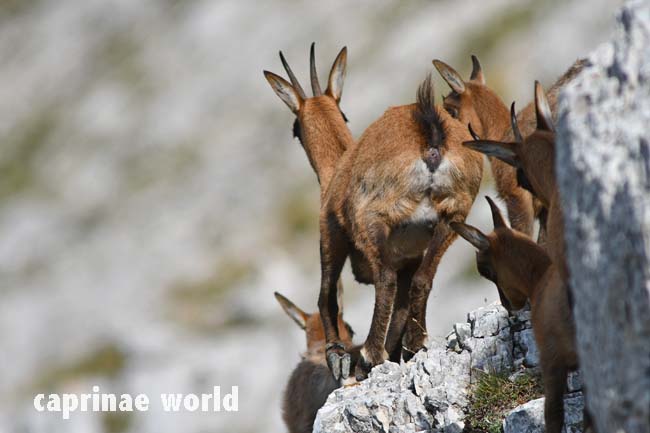 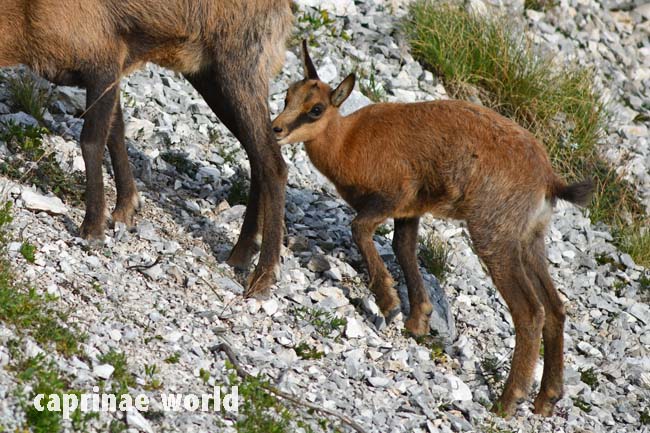 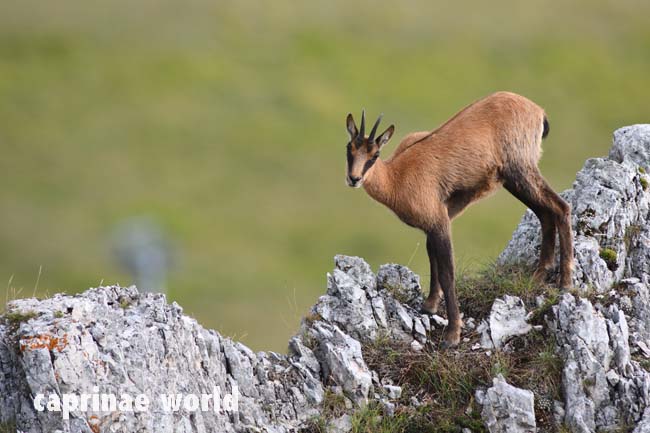 The horns of the Apennine Chamois are positioned closely together, and apparently incline backward to a greater degree than in the Alpine species (Lydekker 1913; Masini and Lovari 1988) [2] 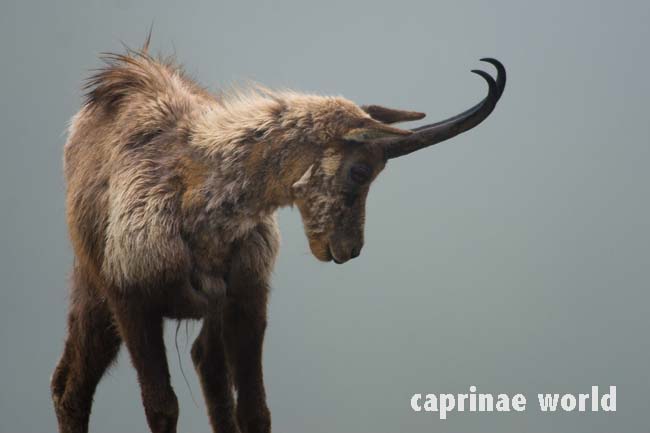 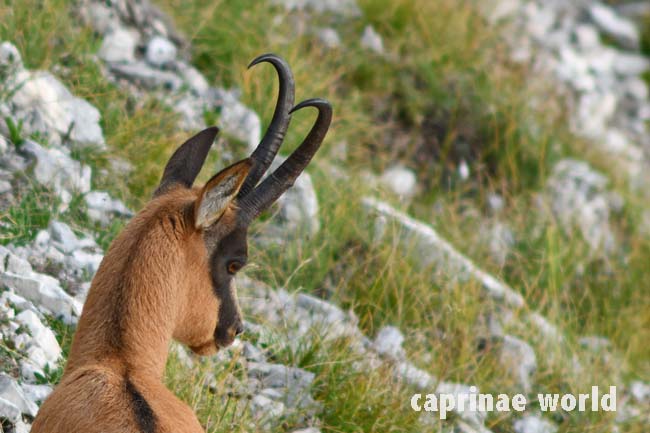 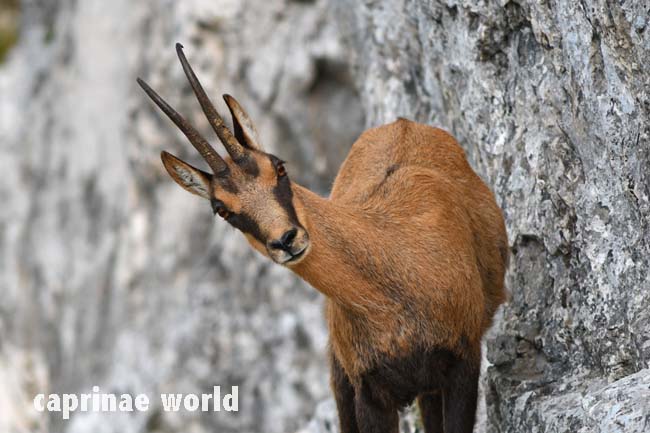 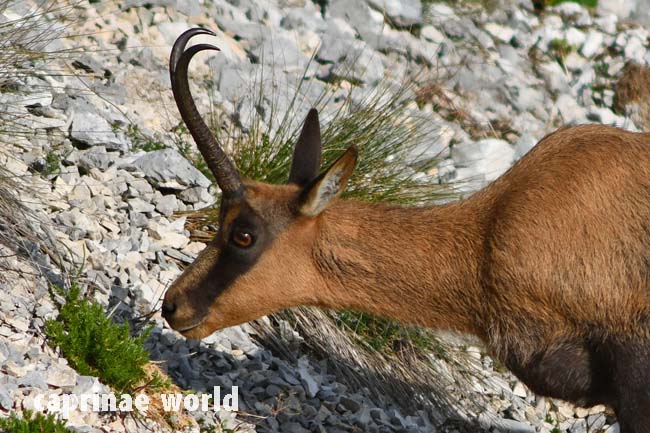 Some horn measurements of a very restricted sample size from Couturier (1938); (none of the hunting data basis contain records of the Apennine Chamois) [2]:

Are the horns of Apennine Chamois longer?

Despite the limited sample size, it appears that the Apennine Chamois has on average much larger horns than do the other two pyrenaica-subspecies. Whether the average horn length of larger sample sizes approaches or surpasses that of the Northern Chamois (R. rupicapra ssp.) is astonishingly not known and needs further research. It appears that the subspecies was already scarce in the late 19th century before hunting data bases were built up. [2] Later the subspecies remained scarce and it was not possible to collect data.

Nevertheless do authors mention the „exceptional length“ of Apennine Chamois horns. [2] It has been explained that their horn length depends mainly on the growth they still have in the fourth year of life, whereas growth becomes negligible in other chamois populations from the third year on. From five years old onwards, growth is equal to what happens in other populations i. e. negligible (0.5-1 mm per year). The horn length of Apennine Chamois may be a genetic trait or it may depend on the calcareous nature of the Apennines (Chirchella et al. 2012) or both. [2] However this does not explain why other chamois subspecies from calcareous regions do not exhibit similar horns. 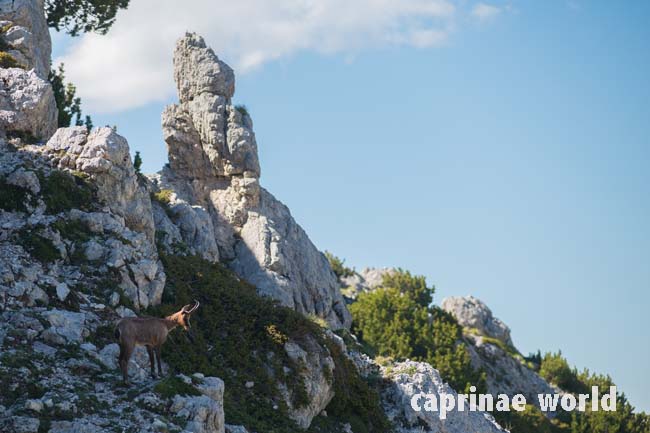 Could the calcareous habitat of Apennine Chamois be an explanation for their horn size? Photo: Bürglin / Abruzzo National Park, Italy

Apennine Chamois occur at elevations of 400 to 2800 metres. They use alpine meadows during warm seasons but move to lower forested areas during the winter when snow accumulation limits access to forage in high meadows. Use of wind-protected, steep slopes prevail in winter. [16] 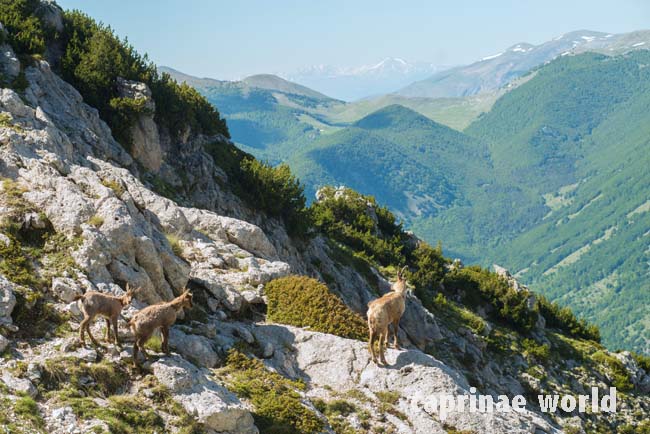 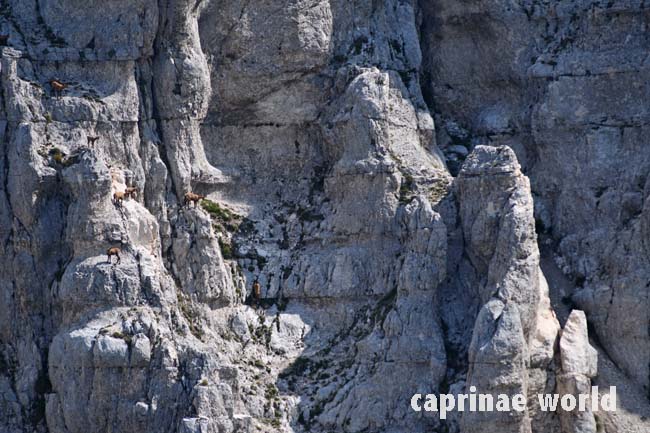 Apennine Chamois in their habitat at Monte Sibillini. Photo: Bürglin 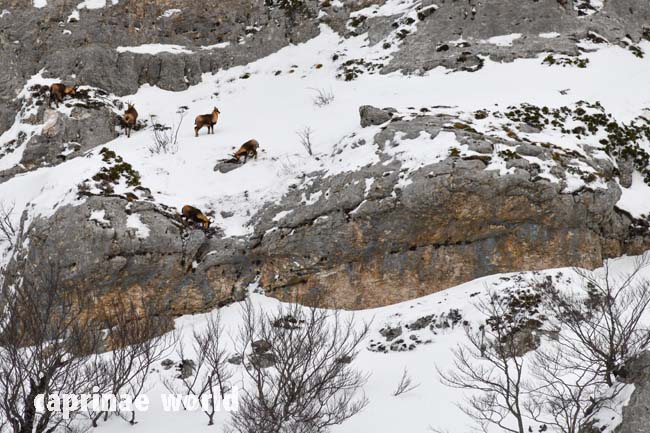 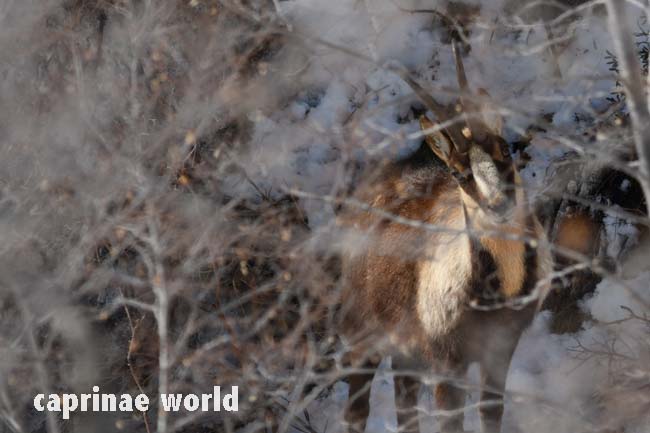 This male was seen at timberline in January at Monte Bove Nord, Monte Sibillini. Photo: Bürglin 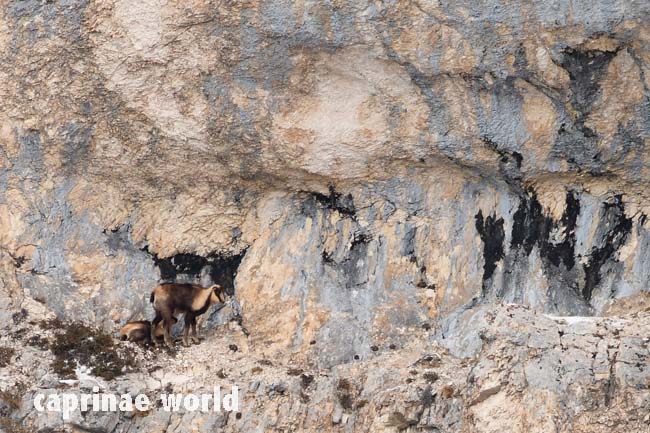 A female with her young blend in perfectly in front of the patchy rocks at Monte Sibillini, Italy. Photo: Bürglin

The Apennine Chamois probably feeds on forbs and grass in the warm season and consumes a higher percentage of browse in the winter. [16] 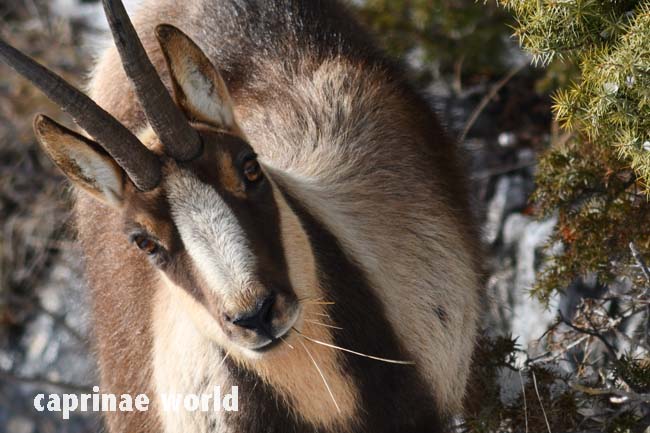 For this male at Monte Sibillini sedges (Cyperaceae) belong to its diet in January. Photo: Bürglin

rutting behavior: When a male approaches a female, it stretches its neck upright; the throat patch presumably functions as a annunciator. Being approached a female often urinates in front of the male and then dodges with a submissive gesture. [7] 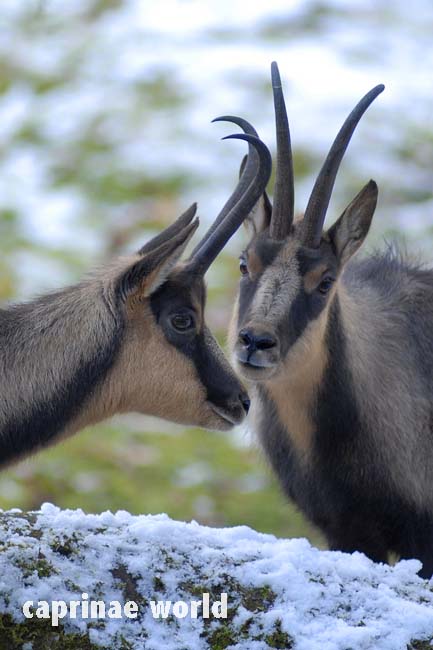 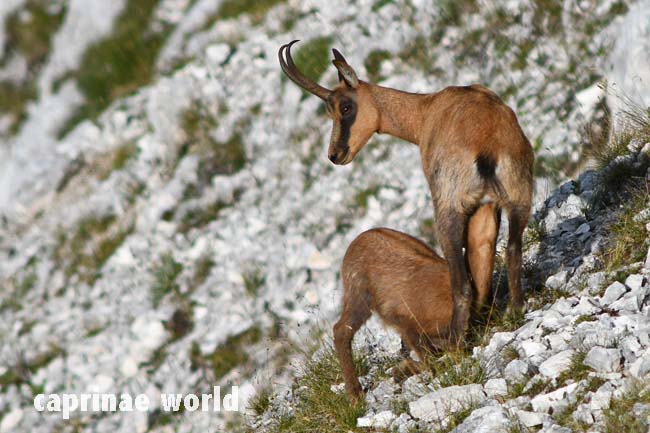 Female and young of the year at the end of August. Photo: Bürglin / Monte Sibillini, Italy 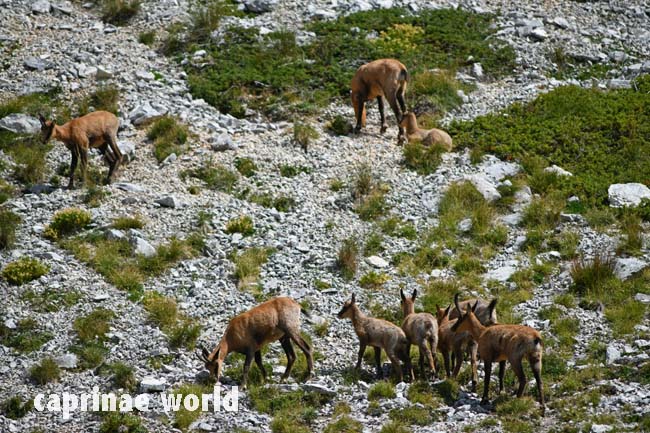 During summer, feeding occurs in early morning and afternoon. [16] 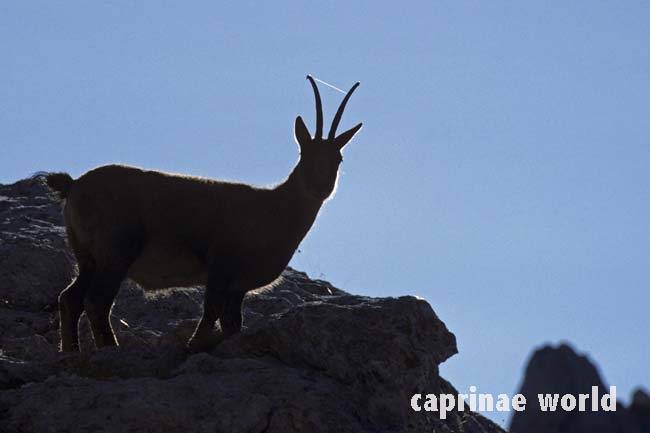 The work of a spider proves that Apennine Chamois also make a break once in a while. 😉 Photo: Bürglin / Abruzzo National Park, Italy

Usually Apennine Chamois move from a high-elevation summer range to a lower-elevation winter range. Size of home range is variable depending on population density, winter conditions, and forage availability and quality. Older males and females are dominant over younger individuals. Herd size is highly variable, largely dependent on population density. [16]

The numbers have probably been low for the last few centuries, beginning to increase only in the 1920s as a result of increased protection. The population plummeted to just several tens of individuals in a single population in the Abruzzo National Park during World War II (Lovari 1998). In 1950, the remaining stock of only about 40 animals narrowed the genetic bottleneck. As a result of good conservation action, including reintroductions and the establishment of new populations, numbers have increased to the current estimate of about 1,635 individuals (2012 summer count) in four subpopulations, up from about 400 individuals in the late 1980s (Lovari 1989). [2]

The Apennine Chamois remains rare and its genetic variability is narrow (Nascetti et al. 1985; Lorenzini 2005), probably due to the long genetic isolation. [2]

Spatial and forage competition with domestic livestock was a primary limiting factor. [16] This is now a problem of the past. [2]

Instead rapidly growing and expanding Red Deer populations apparently have also put pressure on the Apennine Chamois, where the species share habitat. Forage and space competition between them may even become one of the main limiting factors for the Apennine Chamois in the future, since they are displaced from their summer foraging grounds with heavy consequences on their distribution, demography and numbers. [2]

High numbers of tourists in national parks can also be a cause of stress to the Apennine Chamois because of harassment. [16] 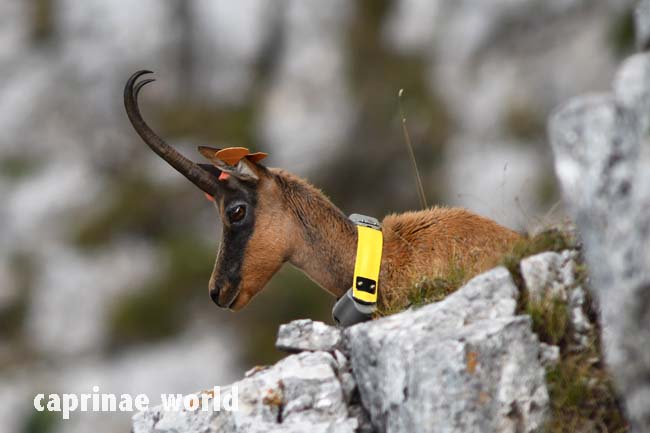 The Apennine Chamois is strictly protected under Italian Law No. 157. A national prohibition on ownership (including hunting trophies) is enforced. [2]

The Apennine Chamois certainly contributes to the nature experience in the national parks where the subspecies is present. Some encounters have been mentioned in trip reports of wildlife watchers – mammalwatching.com.

Stress through harassment by tourists has been documented to be a factor. [16] On the other hand Patterson (1988) showed that flight distances are least in the area with most visitors and are longest in the most remote area. He assumes that continued „benign“ exposure to people encourages further habituation of the animals and so reduce the effects of visitors on them. [9] 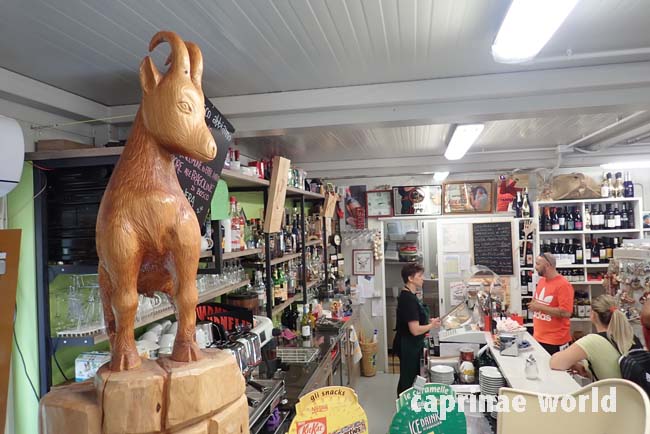 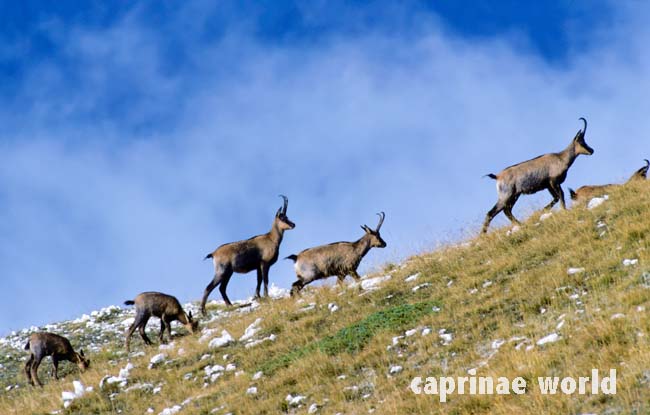