German: Punjab-Wildschaf [16], Punjab Kreishornschaf [2] ((editor’s note: the term „Kreishorn“ – meaning „circle horn“ – should be abandoned; it doesn’t help at all to describe a wild sheep; since all sheep basically have „circled horns“))

The name orientalis is based on a hybrid population in north-central Iran and is not usable. [16]

The Punjab Urial has a redder colour than the Ladakh Urial [4]; it might be even redder than other Urial subspecies in general [1]. The Punjab Urial appears smaller and stockier than the Afghan Urial (O. v. cycloceros) [1, 2]. Groves and Grubb (2011) found that the Punjab Urial is quite distinct from the Ladakh Urial, and evidently has much in common with the Bukhara Urial (perhaps symplesiomorphic: a greater skull height and long nasals, contrasting with a lower skull length and breadth). [4] 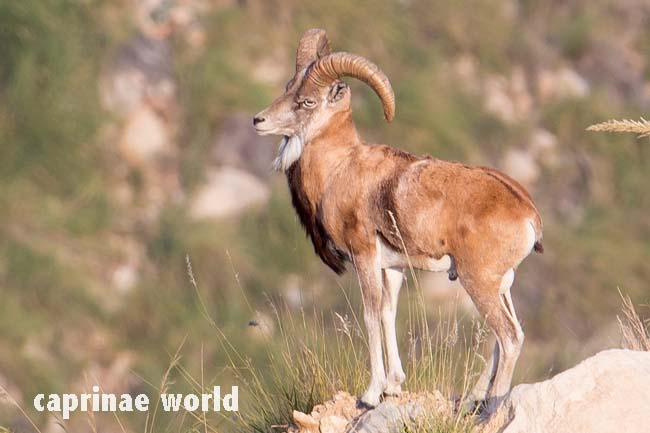 winter coat: more reddish than in other Urials [2]

underparts: whitish; a dark band separates the upper parts from the underparts (2)

but bib / ruff colour also varies: in some, the beard is snow white     and the ruff jet black; in others, both are gray, with the ruff always     somewhat darker than the beard (Stockley 1922) [2]

saddle patch (only males): sometimes shown in mature males, with mixed black and white hairs, but it may be absent or only white (Schaller 1977) [2]; usually white, but the patch can be bicolored or absent [16]

Prevailing habitat of the Punjab Urial consists of stony, rounded hills in dry, subtropical semi-evergreen scrub forest at 250 to 1.000 metres above sea level. The hills are interspersed with gullies and ravines. In the Kalabagh Game Reserve in the Salt Range, yearly rainfall is 452 millimetres and 60 per cent of precipitation occurs during summer. Although Punjab Urials usually avoid tall vegetation, they do enter tall vegetation habitats for thermal and security cover and for foraging. However, they are more often found in rugged topography with low vegetation cover. Areas with tall dense vegetation are the least utilized. They share habitats with domestic sheep, goats, and cattle. [16] 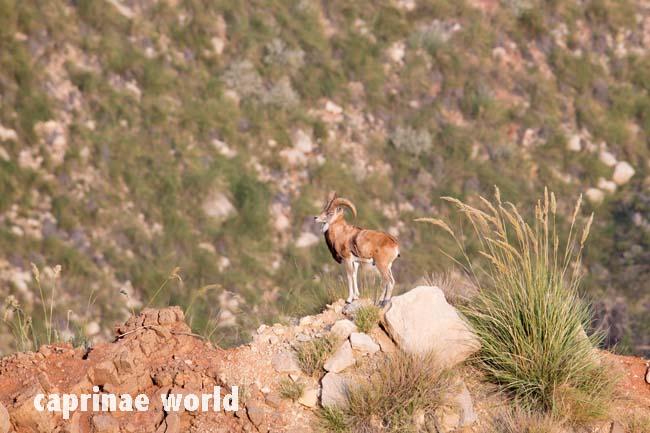 Punjab Urials – like all other Urials – are primarily grazers, feeding on grasses and sedges, but they can switch to browse during the autumn and winter when grasses have lost their nutritional value.

In a study within a protected area devoid of livestock they fed on 44 plant species, and their annual diet consisted of 67 per cent grasses, 18 per cent forbs, and 16 per cent browse (shrubs and trees). Diet overlap with domestic sheep and goats may be significant. [16]

sexual maturity – males: by age two, but probably are not sexually active until their fourth year. [16]

mating behaviour: Urials are serially polygynous. Larger, dominant rams actively seek ewes in estrus. A male mates with one estrous ewe at a time; it does not form harems. [16]

behaviour at birth: separate from the herd one or two days before giving birth; within a week after birth, lambs are able to follow their mothers even in rough terrain. [16]

2-3 year-old survival: 47 %, (a low percentage for ungulates, but was possibly influenced by emigration; survival was adequate to allow for population growth. [16]

In one study animals began feeding at sunlight, between 4:30 h and 6:00 h during warm weather, but they retreated into shade by 7:30 h and did not feed again until 17:00 h and later. During the warm season, they probably forage at night. During cooler weather, they fed until 9:00-10:00 h, then retreated to shaded plant cover until 16:00 to 16:30 h. During winter, they can remain in the open throughout the day, grazing and resting intermittently. [16]

Within a 40-km² protected area, Punjab Urials formed two to five aggregations of variable herd numbers, with few solitary individuals. They occasionally form herds of 30 to 40 individuals, but most female herds consisted of 4 to 6 members. [16] Others have found group sizes to be between 5 and 7. [2] Most males segregate into ram herds during the birthing period, but yearling rams usually remain with ewe groups. Ram herds usually consist of rams of equal age or social status. [16] In winter when forage quality is low, larger groups are formed than in other seasons and more open habitat is used. Awan (2006) observed a female-biased sex ratio for the entire Salt Range. [2] 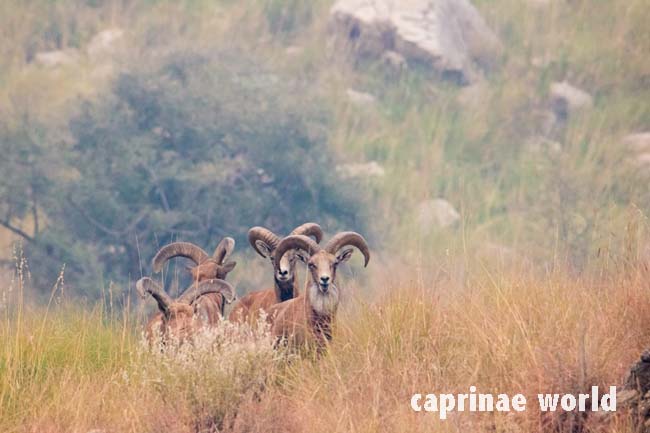 The Punjab Urial population has probably undergone a 50 per cent decline in the last 25 years [16]. ((editor’s note: figure published 2011)) However recent figures seem to indicate a change of trend (see table 2).

One of the greatest threats is the overutilisation of rangelands by domestic livestock, principally domestic sheep, goats, and cattle, which number in the thousands each in the Salt Range. Domestic ungulate ectoparasites and diseases can readily be transferred to Urials. [16]

Lungworms (Cystocaulus) are common parasites, as are roundworms such as Trichuris and Trichocephalus, The Punjab Urials can also be infected with coccidia (Eimeria).

The diet overlap between Urials and domestic sheep can be signifiant and can result in competition.

Overexploited rangelands can also negatively affect ram horn growth. In the Punjab, 74 per cent of the 23 plant genera consumed by Punjab Urial and domestic sheep were eaten by both. Domestic sheep are potential forage competitors. Diets of domestic sheep are also dominated by grasses, consisting of 72 per cent grasses, 13 per cent forbs, and 14 per cent browse on an annual basis. Although domestic goats are primarily browsers, they are also potential competitors, because Punjab Urials increase their intake of browse during the critical winter period. [16]

Other direct human threats include poaching, removal of wood for fuel and grass for fodder and lamb poaching. [16]

Ownership of a pet Urial is a status symbol in Pakistan (Awan 2001). In fact the pet trade appears to be the greatest short-term threat to the survival of Punjab Urial (Awan 2006). There appears to be a relatively high incident of lamb poaching in the eastern section of Salt Range (ESR). [2] In an unprotected area near human habitation and with lax anti-poaching enforcement, poachers removed about a quarter of the lamb crop for sale in the pet trade and shot all rams older than six years of age. In the Kalabagh Game Reserve, where wildlife laws are strictly enforced, fewer than 5 per cent of the lambs were removed and about 34 per cent of adult rams were six years of age or older. [16]

Punjab Urial have been protected through hunting in the Kalabagh Game Reserve (KGR, 137 km²) since the early 1930s. Here Urials are sheltered from poaching and its core range experiences no forage competition with livestock. Mature males were harvested within a restricted trophy hunting program until 1974, which produced six to ten Class IV rams near the end of their natural life span annually (Frisina 2001). The same author conducted a survey and counted 259 Urials and suggested that a hunting quota of five Class IV rams would be sustainable. Awan et al. (2004) reported that KGR would support about 500 animals. In the KGR the local community is fully involved in conservation and the Urial population in the reserve is viable in terms of population and genetic processes. What happend between 1974 and 2003 is not known, however a sustainable trophy harvest quota was established in 2004 (Awan 2006). [2]

The Punjab Wildlife & Parks Department annually puts a limited number of Punjab Urial trophy hunting permits on public auction. For the season from 1st December 2011 to 15th March 2012 the Department auctioned eight permits for hunts in community-managed Urial conservation areas of Chakwal and Jhelum districts. Each hunt must be completed within seven consecutive days. [2]