It is the smallest of all „wild“ goats [7] and the national emblem of the Mediterranean island of Crete with immense cultural significance. [2] 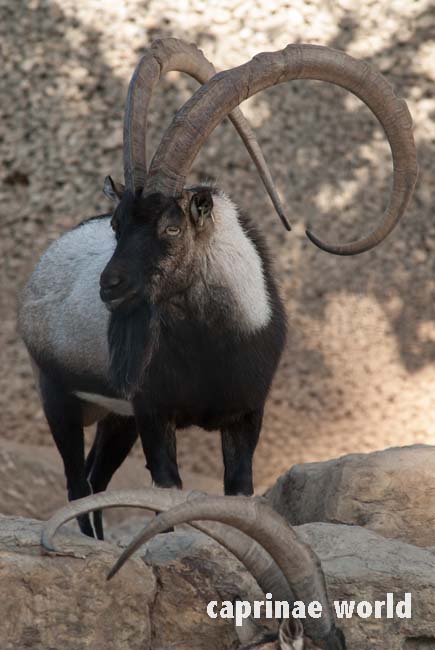 The population on the main island of Crete is restricted to an area of about 72 km² in the Lefka Ori (White Mountains) in the western part of the island, including Samaria Gorge / Samaria National Park. [2]

Origin: Molecular analyses and genetic and archaeo-zoological studies (Hiendleder et al. 1998; Manceau 1999; Bar-Gal 2002) suggest that the Agrimi is not, as previously thought, a distinct Wild Goat subspecies but rather a feral descendant of the prehistoric Capra stocks which arrived on Crete in the Aceramic Neolithic (about 7.000 BC) [2] or even 9.000 BC (see below) [61]. Matschei (2012) describes the Agrimi as a „primitive feral goat“. [7] Some of these semi-domesticated goats escaped, giving rise to feral populations, the descendants of which have survived up to the present. Back in the wild, they maintained similar morphological patterns to their near-eastern ancestors, the Bezoar (C. aegagrus). There is another hypothesis (Horwith and Bar Gal et al. 2002) which suggests that the Cretan Wild Goat may be wild in origin, even though introduced by humans to Crete, but has subsequently partially interbred with domestic animals (seen in Papaioannou 2010). These ancient feral forms are of interest as „living fossils“ and repositories of important genetic diversity (Shackleton 1997), representing the very earliest domestic stock little changed from its primitive state, and deserve protection [2]. In that sense Groves and Grubb (2011) consider the Cretan Wild Goat as „extremely valuable“. [4]

Wild goats were brought to the islands since ancient times. They were released so that they could breed and provide a store of fresh meat that would be readily available along the maritime routes of antiquity. Mostly small and barren islets were chosen for that purpose, which could not be cultivated and were otherwise unattractive in human economic terms [61].

The oldest literary reference for the occurrence of wild goats on Mediterranean islands is found in Homer’s Odysseus. Homer describes an isle of wild goats, where Odysseus and his companions land to hunt before the Cyclops episode (The Odyssey, book 9, 133-et seqq.). [61]:

„Facts“ referring to The Odyssee: Cyclopes have been associated with the island of Sicily and the volcanic Aeolian Islands. Lachea (or Isola di Aci) is the biggest of the Islands of the Cyclopes, about 100 metres off the harbour of the Sicilian settlement Aci Trezza. But the surface measures only two hectares [Wikipedia]. However in the German Odyssey translation by Roland Hampe „Lachea“ is not mentioned at all. Concerning the abundance of goats on Lachea – or whatever island it actually was: Ulysses‘ men hunted 109 goats in one morning. – Homerian criticism dates the definitive version of The Odyssey to the 7th century BC. [61]

However according archaeological evidence the first occurrence of wild goats on Mediterranean islands is even more ancient. Wild goats made their first appearance on the Mediterranean islands sometime after the end of the 9th millennium BC. The first evidence for their introduction comes from Cyprus, where the earliest osteological remains of the species were provided by the archaeological exploration of the prehistoric site of Shillourokampos, in the south-western part of the island, referred to as the Pre-Pottery Neolithic period. Archaeological evidence of the introduction of Capra aegagrus on the Aegean islands, such as Crete and Youra (Northern Sporades), also exists, dating respectively to the Pre-Pottery Neolithic and the Mesolithic periods. [61]

The occurrence of wild goats in very recent historical times has also been reported on the island of Skopelos, in the Northern Sporades and on Euboea. An old record (May 1942) for the occurence of Capra aegagrus hircus on the small islets of Dragonada (3,5 km²), off the easternmost coast of Crete, is available in the collection of the Naturhistorisches Museum of Vienna. Wild goats of aegagrus phenotypes were also reputed to occur in the mountainous areas of Rhodes, in very recent historical times.

Rhodes: In 1888, for example, M. P. Matschie presented to the Zoologial Museum of Berlin a specimen from this island, in which the horns were more developed than those of the Cretan Wild Goat, but less than those of the nominal form, the Asia Minor Pasang. As far back as 1943-1944, Tortonese reported that on Rhodes there was a custom of keeping specimens of wild goat, imported from Anatolia, in conditions of captivity in private enclosures. [61]

Populations of wild goat reported from the islands of the Aegean Sea have been described as belonging to three different types [61]:

Pure or not pure? Masseti (2012) states that from a morphological point of view, all these insular populations are closely connected with the true Wild Goat, the Asiatic Bezoar Goat [61]. Shackleton (1997) and Papaioannou (2010) report that animals from the islands of Dia, Agii Pantes (Agii Apostoli), Erimomilos (Antimilos), Samothrake, Gioura (Youra) and others, as well as populations in the Czech Republic (Pedrotti and Lovari 1999) and Macedonia are considered hybrids of „wild“ and modern domestic or feral goats. [2] Matschei (2014) – quoting Grzimek (1988) – states that only animals from 68 ha islet Agii Theodori are pure-blooded. [7]

general appearance: The Agrimi still displays more or less the same phenotypical patterns as the Bezoar Goat (Capra aegagrus aegagrus) [61]. Body size is somewhat smaller than in the Bezoar Wild Goat. Feral-goat hybrids from the Northern Sporades and the Cyclades are considerably smaller still [2]. It is actually the smallest of all „wild“ goats [7].

similar to the Bezoar Wild Goat; with tawny-greyish or sandy being predominant as base colouration interspersed with greyish-white hairs. [2]

females: brownish tan at all seasons. [1]

blackish-brown markings: on shoulders, face and legs; as a separation line between sandy upper body and creamy-white underparts; dorsal line extending from the base of the cranium to the base of the tail [2]

face: predominantly blackish with some elongated sand-coloured markings extending from above the eyes to the cheeks and muzzle. [2] Probably predominantly seen in females

ears: upright with the inside being black, fringed by light-coloured hair

tassels or wattles: the cartilaginous outgrowths emerging at the base of the throat in many domestic goats, are absent [2]

legs: fronts with black stripe, creamy coloured towards the back [2] – black stripes seen on hind legs too; calluses on knees [1]

characterised by scimitar-shaped [2], laterally compressed [1], sharply keeled horns present in both sexes, considerably longer in males. The horns emerge close together on the forehead [2]. Tips are often convergent.

feral-goat hybrids occurring in the Cyclades and elsewhere have considerably shorter horns. Those from the Northern Sporades turn outward with a slight twist into an open spiral shape. [2]

Compared to Agrimi, the domestic-x-Wild-Goat-hybrids‘ coat appears to be slightly longer and interspersed with black hairs. The horns are curved outwards a little more and are more robust. The resting tail is held more horizontal than downwards. [2]

Cretan Wild Goat live in relatively arid mountain areas where there is a mixture of rocky outcrops or scree slopes and vegetation (shrubby maquis thickets or conifer forests) [2]. The density on Agii Theodori, off Crete, is 143 animals per km² – compared to 1 to 4 Wild Goats in Pakistan. [7]

mating season: on Crete from mid October into November (Husband 1977) [7]

time of birth: at Tierpark Berlin during day, early mornings [7]

afterbirths: not eaten by mothers [7]

High ambient temperatures influence the daily and seasonal activity patterns. Usually the animals are seen in patches of open ground only during the cooler hours of the morning and evening. The animals are usually seeking shelter from the day’s excessive heat in dense Mediterranean brush. Agrimi are often solitary but occur also in small groups of varying composition. [2]

The main problem affecting the conservation of Cretan Wild Goats is hybridisation with domestic goats, which is thought to occur even within the unique and long-established wild populations on Mt. Lefka Ori (Adamakopoulos 1997, seen in Papaioannou 2010) and Samaria National Park. A further complication is inbreeding which inevitably occurs in small introduced populations which all originates from three Lefka Ori pairs introduced to Theodorou Island in 1928, 1937 and 1945 (Papaioannou 2010). Poaching, food competition with livestock, and human infrastructure like increased road accessibility and disturbance through tourism are additional problems. [2]

Agrimi are strictly protected in Crete and the adjacent islets like Theodorou Island (Greek National Law of 1969, presidential decree 86/89, and following modifications). Apparently there are no current management plans in operation in the protected areas of Crete other than an attempt to control poaching. [2]

Shackleton (1997) suggested that it may be desirable to eradicate domestic-x-wild-goat-hybrids. He cautioned, however, that F1 hybrids would be difficult to distinguish from pure Agrimi in either external appearance or behaviour. Shackleton proposed that it may be desirable to determine the degree of hybridisation of the goats found on the various islands to help direct conservation management decisions. [2]

Very low quotas of Cretan Wild Goat are available for hunting in State controlled hunting reserves and state and private game enclosure (Papaioannou 2010). On Sapienza and Atalanti, the Cretan Wild Goat populations are managed by the Greek authorities overseeing wildlife and national parks for sustainable use through recreational hunting (Hellenic Forestry Service, attached to the Ministry of Rural Development and Food). The rules governing access and hunting on the islands are very strict. [2]

Atalanti allows hunting from September through February, but only on Fridays when the island is closed off to sightseeing. Hunters are not allowed to overnight and are ferried between the island and mainland by boat (Crown, The Hunting Report 2009). [2]

The hunting season on Sapienza is limited to the month of November and, although hunting is allowed five days a week, effective hunting days are restricted to three per week. [2]

Agrimi hunting permits are given each season to a maximum of six to eight foreign hunters and 20 resident hunters (Crown, The Hunting Report 2009). [2]

Heavily frequented Samaria Gorge on Crete is probably THE PLACE to look for Agrimi. For Theodorou Island you need a permit to get there (Eric Dragesco, pers. comm.) Mt. Parnitha / Mt. Parnitha National Park, north of Athens, seems like an easily accessible place. However while Red Deer is a well documented species by tourists on Mt. Parnitha, a hint of the existence of Agrimi could only be found on the website of the National Park – www.parnitha-np.gr