This endemic phenotype from Pakistan has been classified as a subspecies of either Wild Goat or Markhor, or it may be a hybrid population between them [16]. Its variable horns are the most distinctive feature. 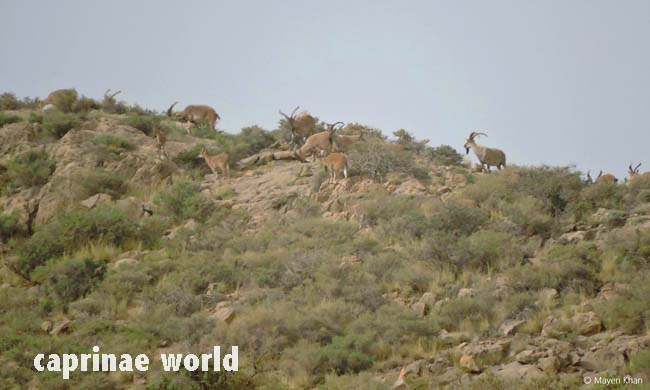 The Chiltan Wild Goat was first described by Lydekker (1913) as a subspecies of markhor, (Capra falconeri chialtanesis), and subsequently was hypothesised to be a hybrid either between markhor and domestic goat (Burrard 1925; Dollmann and Burlace 1935) or between markhor and wild goat (Roberts 1969; Epstein 1972; Valdez 1985). However, in Schaller’s and Khan’s (1975; see also Schaller 1977) revision of markhor the Chiltan animals were considered a wild goat being distinguished from Sind Ibex by its horn shape. [12]

The origin of the Chiltan Wild Goat

Schaller speculated that some wild goats became isolated on the cliffs of the small Chiltan Range. He assumed that contact with other goat populations was possibly severed by the growth of a dense juniper forest on the low-lying hills to the south. Over time some minor mutation resulted in the present Chiltan-type horn. After destruction of the forests, contact with wild goat neighbours to the south was established again and the trait for twisted horns appeared there too. [2]

It is also possible that markhor contributed some genes to the Chiltan population, although no evidence for this exists. [2] Schaller and Khan (1975) reported that the screw-horned type occurs in the same herds with ordinary bezoar goats on several ranges, and that bezoar and markhor coexist without interbreeding on at least two other ranges. T. Roberts (1977) maintained that there is evidence that markhor formerly occured on at least one of the ranges where the Chiltan Goat is found. [4] 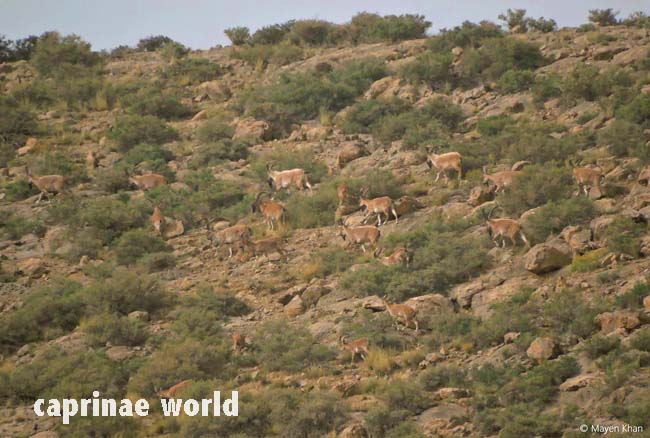 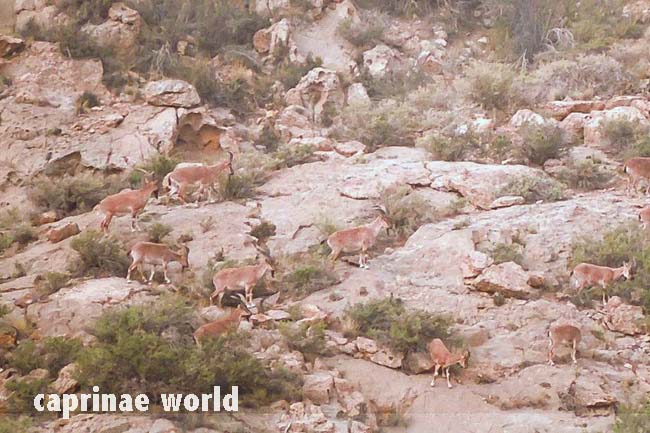 The Chiltan Goat (C. a. chialtanensis) was restricted in the early 1970s to four or five populations in the accessible mountain ranges (Chiltan, Murdar, Koh-i-Maran and Koh-i-Gishk ranges) south of Quetta (Roberts 1977, Schaller 1977). Today, these have been reduced, principally by uncontrolled hunting, to only one surviving population in the Hazarganji-Chiltan National Park [6], 20 kilometres southwest of the town of Quetta [2].

Colouration / pelage in general: The pelage of adult Chiltan Goats (males and females) lacks any chest ruff [2]. They are reddish-grey in colour with a dark brown mid dorsal stripe from shoulder to rump. Males, as they reach their third or fourth winter, have an increasing amount of white and gray hairs in the mid-dorsal and shoulder regions. According to observations by Schaller and Mirza, some males have a darker brown, almost black, chest, a feature not shown by the Straight Horned Markhor, but typical of the Bezoar and Sindh Wild Goats, and they may also show a shoulder stripe (Roberts 1977). [2]

legs: creamy-white baring conspicuous dark brown pattern on the fore-part of the shank with a white „knee“ (carpal) patch and the dark brown spreading around the base of the fedlock. [2] 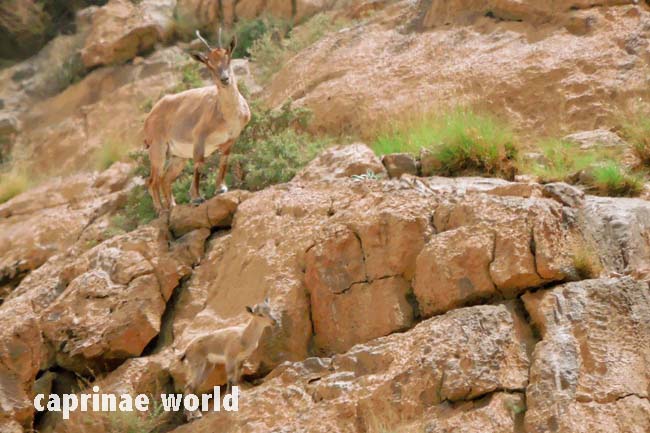 Female and young. Note the overall reddish-grey pelage in both animals and in the female the typical legs with brown patches and whitish „knees“ (carpals). Photo: Majestic Pakistan / Mayen Khan 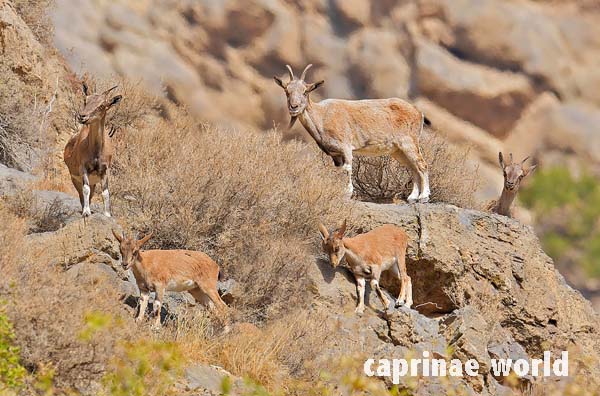 Horns of males: The set of horns described by Lydekker in 1913 formed a complete spiral and, in general, resembled those of markhor living on the Takatu and Zarghun ranges, except that the Chiltan Wild Goat horns had a sharp keel in front, in contrast to typical markhor horns which have it on the back. Schaller (1975 and 1980) who studied the Chiltan population, found only one out of 27 sets of horns with a complete spiral; most were essentially scimitar-shaped, except for a terminal inward twist. He also described an occasional prominent knob or two. Roberts (1977) writes the horns are invariably strongly keeled on the front and flattened in cross-section. Chiltan Wild Goat horns are more massive but shorter than other Wild Goat horns. [2]

Cross-section of bony horn core: resembles that of the Wild Goat, and not the Markhor. [2]

Broken horn tips: It has been assumed that the horns of Chiltan Wild Goats are either fragile or designed to break, when the tips come into violent contact (when males clash). The fact that conventionally scimitar-shaped Wild Goat horns from an area where both types occur, also break easily, suggests that fragility may be the cause. [2] 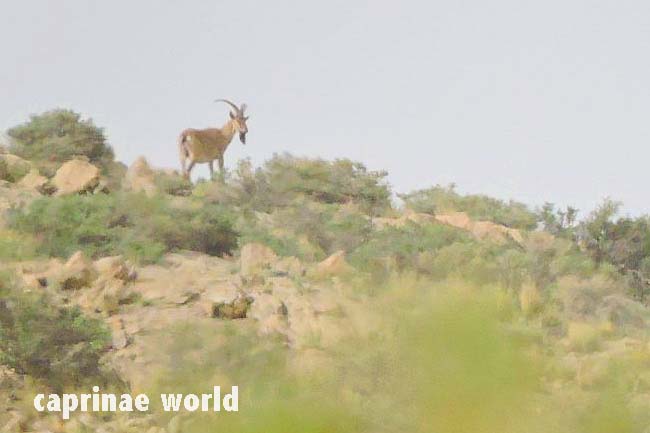 Chiltan Wild Goats generally inhabit the most precipitous slopes of the Hazarganji and Chiltan areas, where there are rocky cliffs with numerous deep and narrow gullies in which they rest during daylight hours. Older male goats tend to keep to the highest and most precipitous cliffs. These upper slopes are poorly vegetated with only a scattering of juniper, wild pistachio and some undergrowth of a few grass species.

Chiltan Goats tend to descend to lower altitudes to feed when food is scarce, covered with snow, or dried, being found on the gentler slopes or in valley bottoms where more vegetation is present. During the rut (commencing mid-October) and the colder winter months, the goats are usually also found on lower slopes. [2] 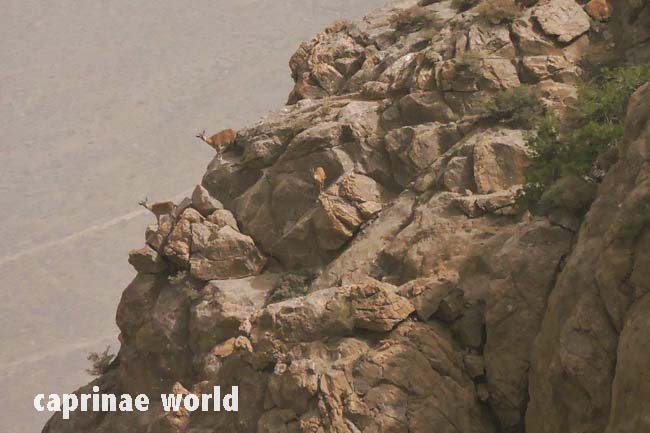 The world’s last remaining population of Chiltan Goat is restricted to Hazarganji-Chiltan National Park (Forest Service reports cited in Virk 1991). Previous efforts to protect this park included more administrative staff, control of livestock grazing, wood cutting, poaching, and construction of ca. 30 km boundary fence. This resulted in a marked recovery of the vegetation and an increase in the Chiltan Goat population prior to 1990 (Baluchistan Forest Department Records, cited in Virk 1991). However, there are reports that afterwards conditions have deteriorated in the park. [6]

In 2002 Shafique and Barkati reported that a proactive management plan was developed for Hazarganji-Chiltan National Park with the financial support of World Bank, with special emphasis on improving the status of the Chiltan Wild Goat. [2]

Not clear if conducted. Slamquest.org lists one outfitter who carries Chiltan Wild Goats in his program. If Chiltan Goats are still restricted to Hazarganji-Chiltan National Park than of course there should be no hunting. As quoted above: Only when viable populations have been built up outside the park, should trophy hunting be considered as a possible means of generating funds for further conservation efforts.