The Japanese Serow is maybe the most noted serow species. It occurs in good numbers in its natural range and is the only serow that is well represented in zoos outside its native country. 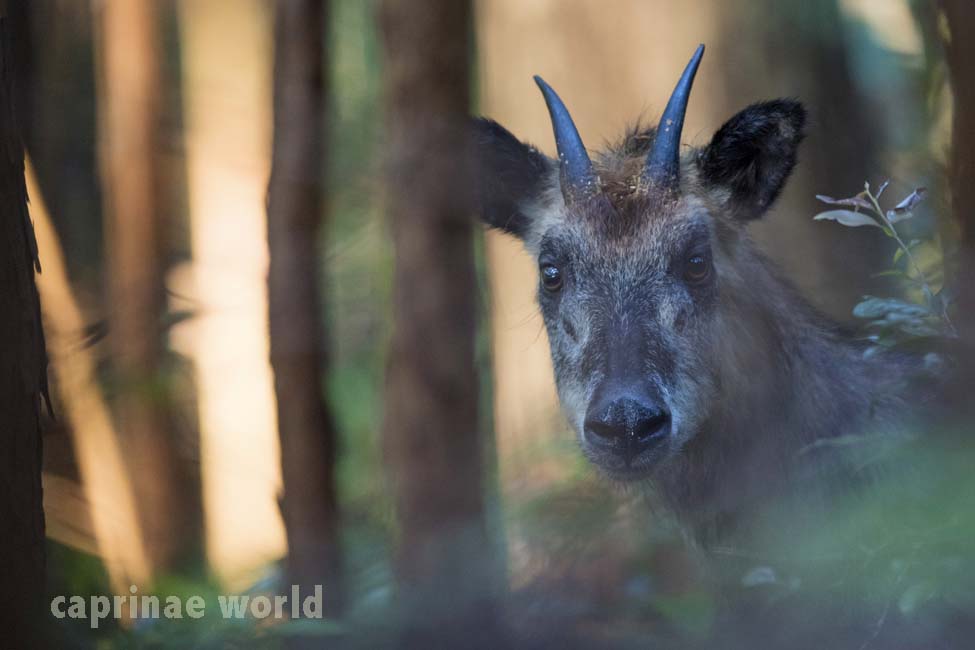 The Japanes Serow is remarkable in that it is a primary forest species that is capable of adapting to coniferous plantations. Photo: Akira 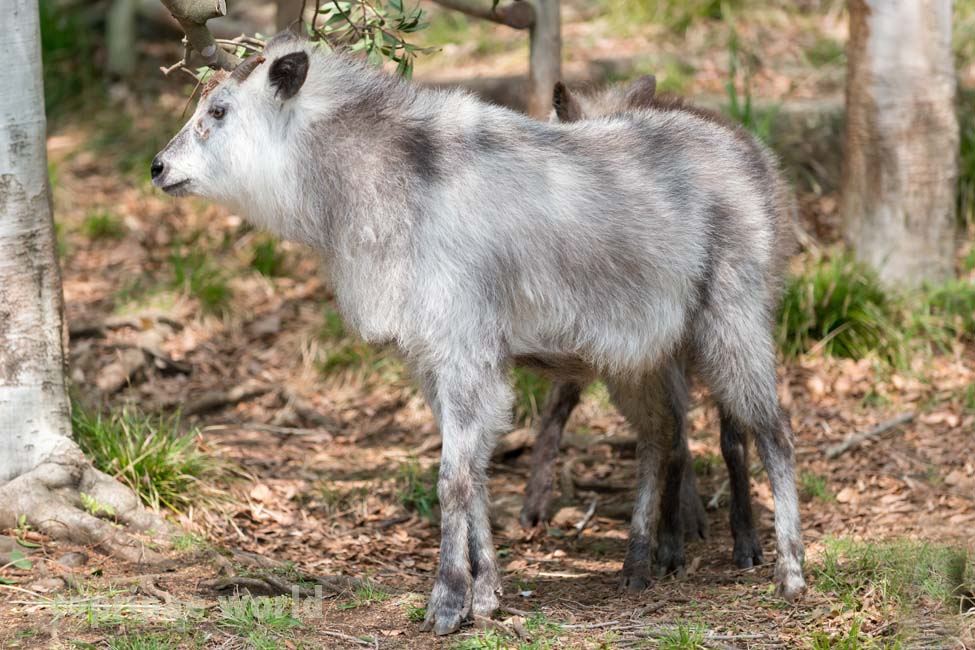 The whitish color variety of the Japanese Serow.  Even though three to four more forms exist, these color variations are not to be ascribed to subspecies statuses. The Japanese Serow is monotypic. Photo taken at Kanazawa Zoo, Yokohama, Japan by Bruce Batten

There is no fossil record of the Japanese serow. Its taxonomic position has led to its being called a „living fossil“. (7) Mitochondrial DNA studies revealed that Pleistocene climate changes and the uplift of Qinghai-Tibetan plateau might have played an important role in the genetic differentiation of Sumatran, Formosan and Japanese Serow. (8)

The Japanes Serow is larger and shaggier than the Formosan Serow. (5)

Compared to the C.-sumatraensis-group, the Japanese Serow is smaller and has shorter ears. The preorbital gland is situated less deep. The foot gland is said to be more gorallike. The facial angle is steeper. The scull breadth is more than 42 percent of the length. Cheekteeth are very large, averaging 33 percent of the scull length. The horns are directed more upward; they are broader at base and have rings which are more prominent. (4) 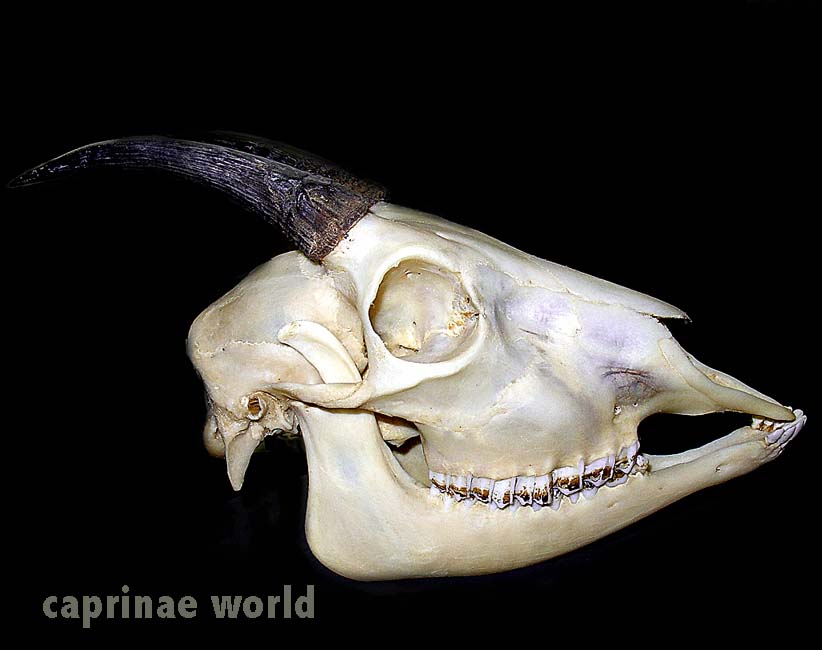 The Japanese Serow is endemic to Japan. It inhabits mountainous areas (1) on Honshu (extinct in West Honshu) (5), Shikoku, and Kyushu Island. Due to conservation measurements between 1978 and 2003, the distribution area has expanded by 170 percent. On the other hand, the population density has slightly decreased in many areas. (1) 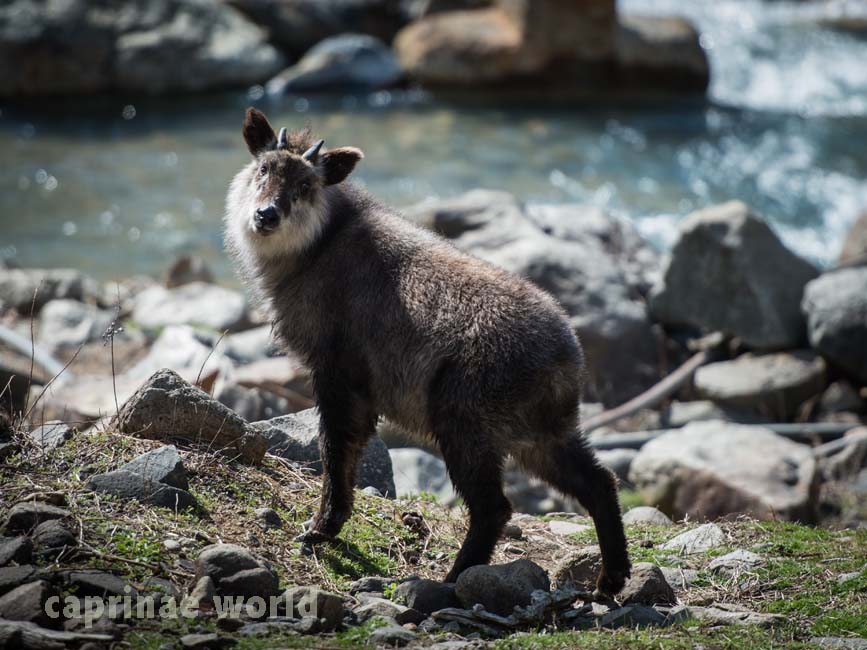 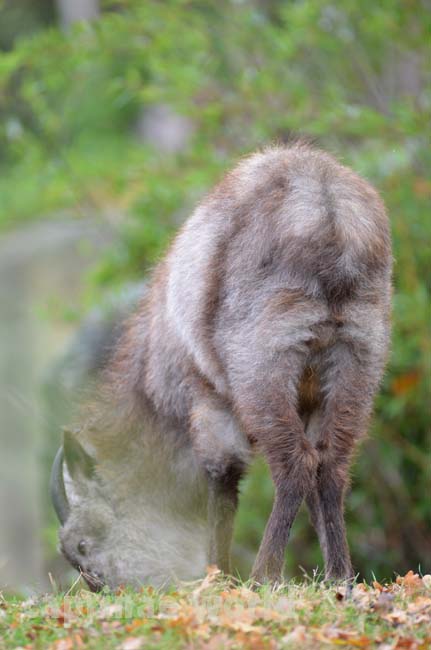 No rump patch, barely colour-contrasting tail: the Japanese Serow’s backside is rather inconspicuous – which is typical for rather primitive species.

ears: long (1) compared to the head size, but short (4) compared to mainland serows; they are pointed (1) to egg-shaped and covered in brown hair.

nose: „naked bridge“ according to Damm and Franco, 2014 (1). I could not identify a single specimen to which this description would apply.

pelage: under wool long white (4); guard hair is typically long, harsh, and crisp (1), not uniform in color, unlike in other serows, being mottled (5, 1), white, with black or red-brown tips, but these wearing off in the course of the season, with the overall tone sometimes becoming whiter or grayer. (4) There may be a dark collar encircling the lower neck. (1, 5). Five pelage color variations have been described: whitish, grayish, black, black with a white dorsal spot (3) and dark brown (1). I consider four types – see illustration below.

Extra long, fluffy hair grow around the cheeks (beard), the upper neck (neck ruff), and the crown of the head. (3, 4) Damm and Franco (2014) refer to a white bib under the chin, which extends down the throat and up along the jowls. (1) A „bib that extends up“ seems not to be appropriate. I prefer the terms „beard“ and „neck ruff“. 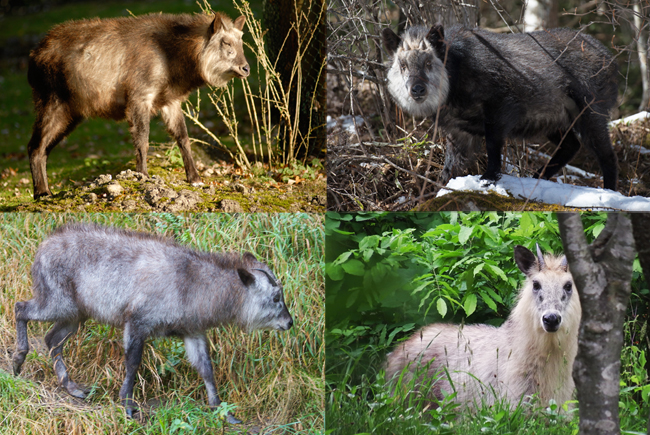 Four of the five pelage color variations in Japanese Serow. It is not clear how they evolved. I found only one possible explanation: Pelage hair has darker tips, these wearing off in the course of the season, with the overall tone sometimes becoming whiter or grayer. (4) Photos – top left: Ralf Bürglin; top right: Yunghui Hsu; bottom left: Wolfgang Dreier; bottom right: Shigeki Umeta 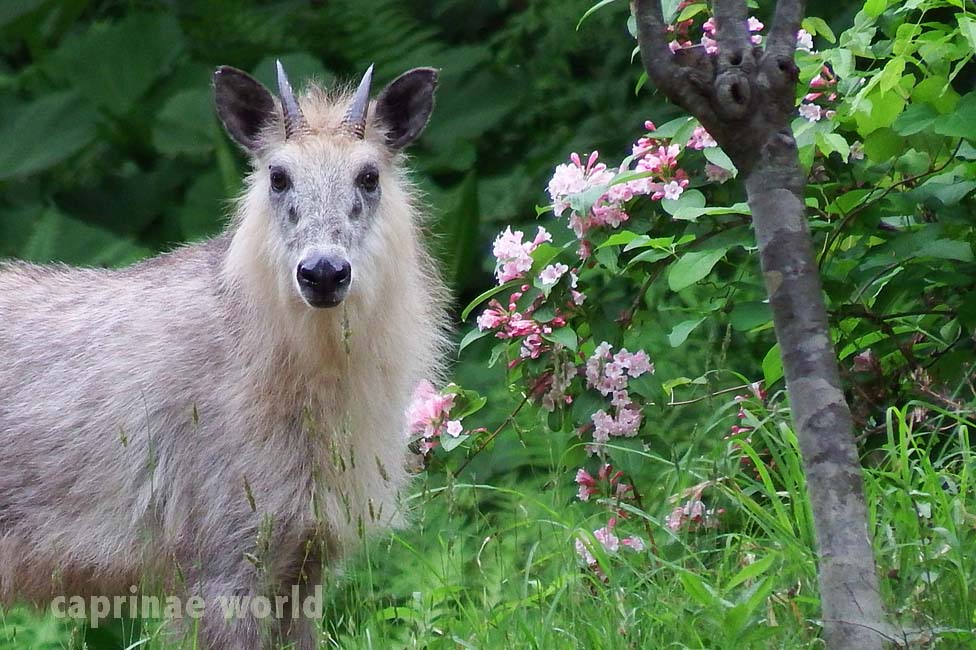 It appears that whitish Japanese Serows are rather rare. Therefore the hair-tip-wearing-off-theory is unsatisfactory. Photo taken by Shigeki Umeta at Mitane area, Akita Prefecture, May 18th, 2015

underparts: whitish (3), light (1, 5) – because of long pelage on flanks tricky to recognize in a standing individual

dark parts of face: top and sides of the muzzle, around the eyes. (4) 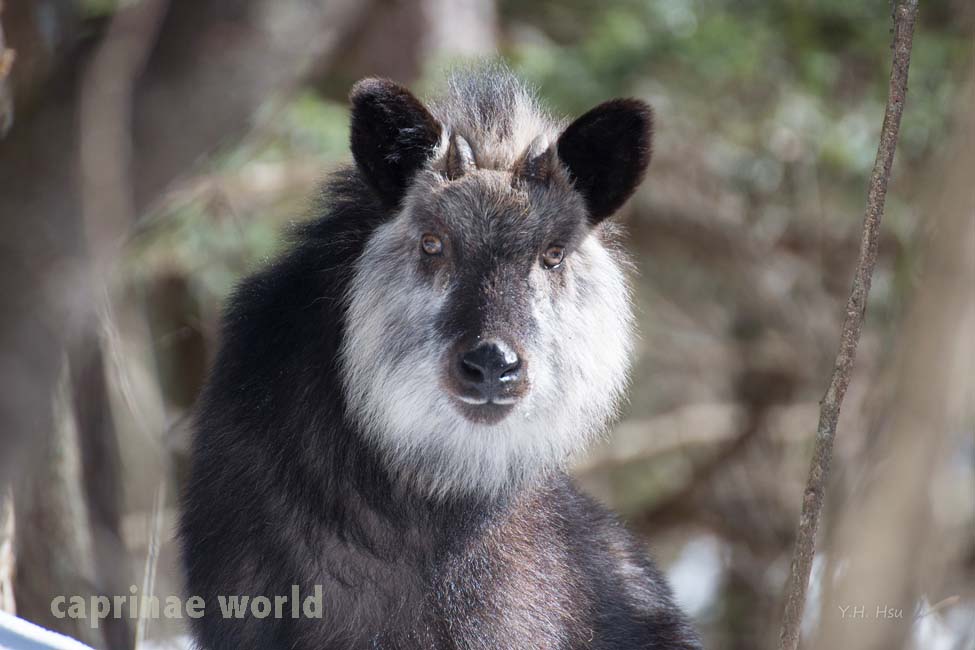 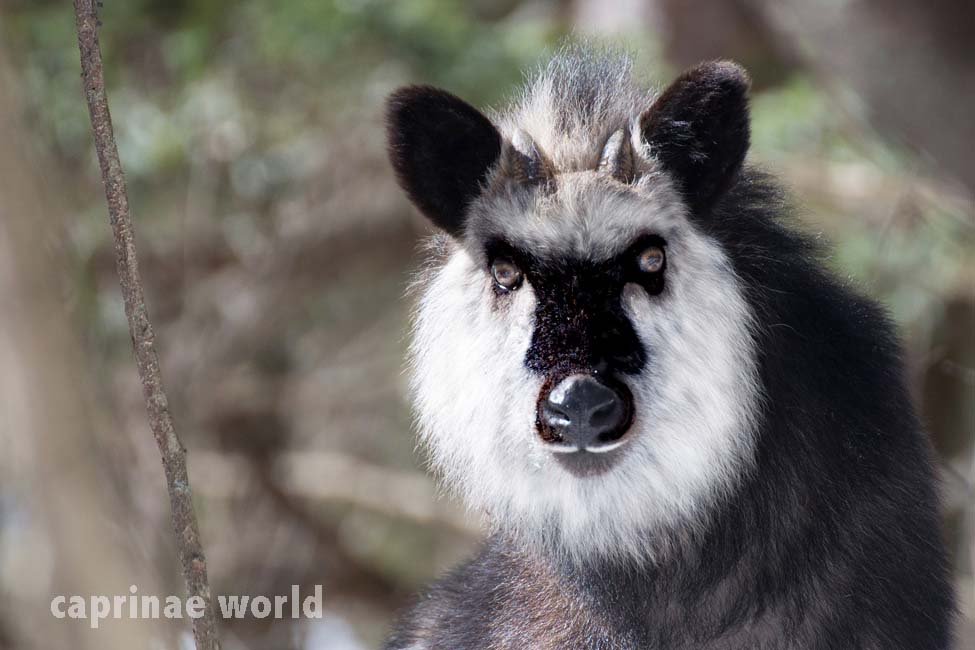 legs: blackish-brown, with or without a white ring around the hoofs. (4)

skin glands: Japanese Serow have three specialized skin glands, including the infra- or preorbital gland, interdigital gland and preputial gland. (6) The preorbital glands are well developed, excrete a clear substance which smells of acetic acid (vinegar) and are used for marking territory and females. (1) Interdigital glands presumably also serve for marking the animal’s home range. (9) The preputial glands are located in the folds of skin near the end of the penis. In wolves and boars they were found as a source of sexual odors. For dogs it is assumed that preputial secretions may also play a role in scent marking. (10) 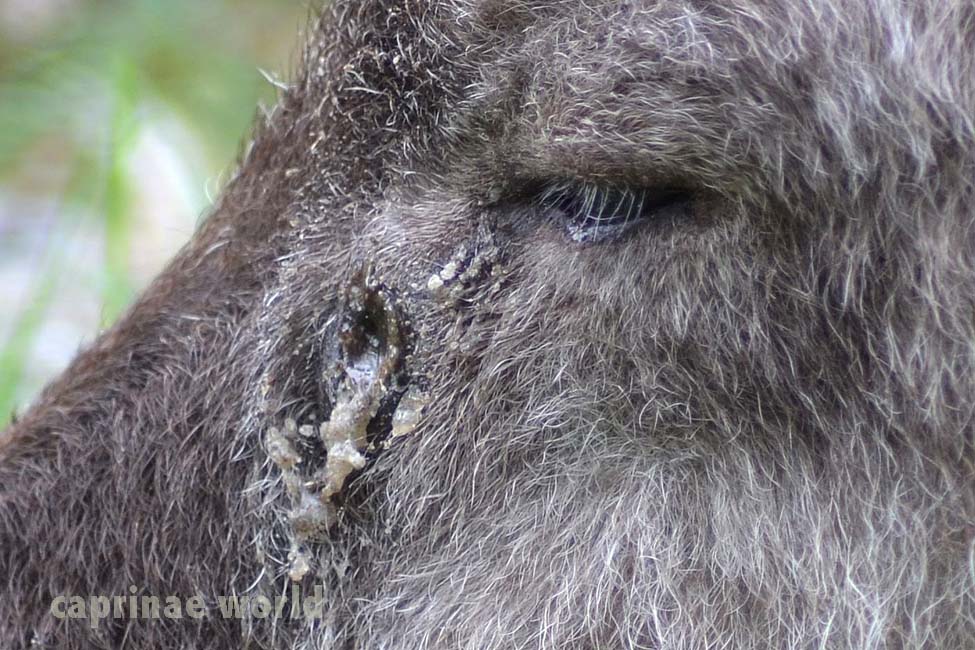 The horns of the Japanese Serow are curved backwards. Sexual dimorphism is minimal. (1) Horns begin to develop at 4 months old in both sexes. (5) Horn length is 12-16 cm in males, 12-15 cm in females (3) or 8-15 cm respectively. Base circumferences range between 8 and 10 cm. In both sexes the horns are ridged on their lower thirds. The horn sheaths have a series of transverse rings. Horns of adult males show greater wear than those of females. The grooves of annual rings are more distinct in females. Horn shape and wear give indication of age. Indicaters include size, curvature, thickness of transverse horn rings and number of transverse rings. (1) 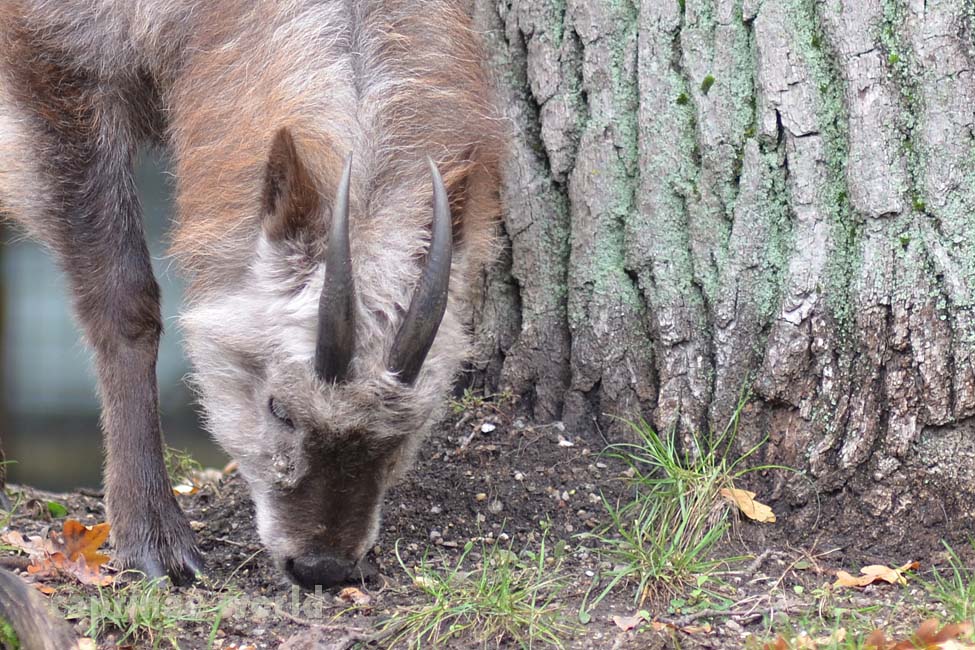 Male Japanese Serow at Tierpark Schönbrunn/Vienna, aged 22 years, 8 month; in both sexes horns are ridged on their lower thirds. However horns of adult males show greater wear than those of females.

Cool forest zone, principally in temperate deciduous forest with more than 80 percent forest cover; terrain rugged, mountainous; occurs from sea level to about 2700 m above sea level. The Japanese Serow also lives in broad-leaved evergreen forest, subalpine coniferous forest, alpine meadows, mixed deciduous and conifer forest, and coniferous plantations. (3) But temperate deciduous forest is the preferred habitat. (1) Its distribution can be patchy because of its proclivity for endemic primary forest. Mature forests are important movement corridors. Number and size of territories and vegetation cover in relation to forage quality, variety, and quantity have the greatest influence on population density. (3) 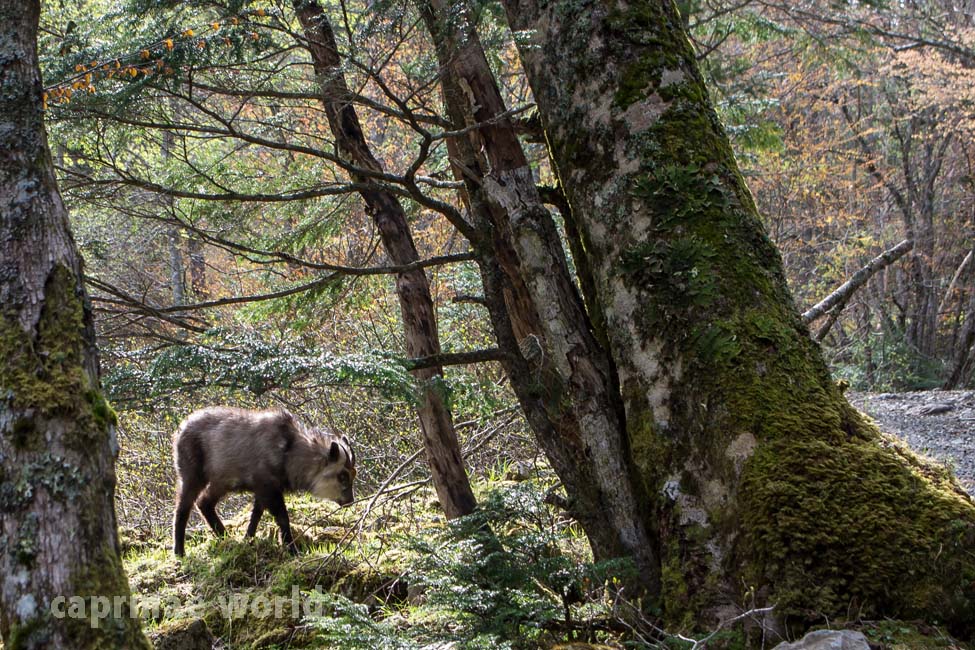 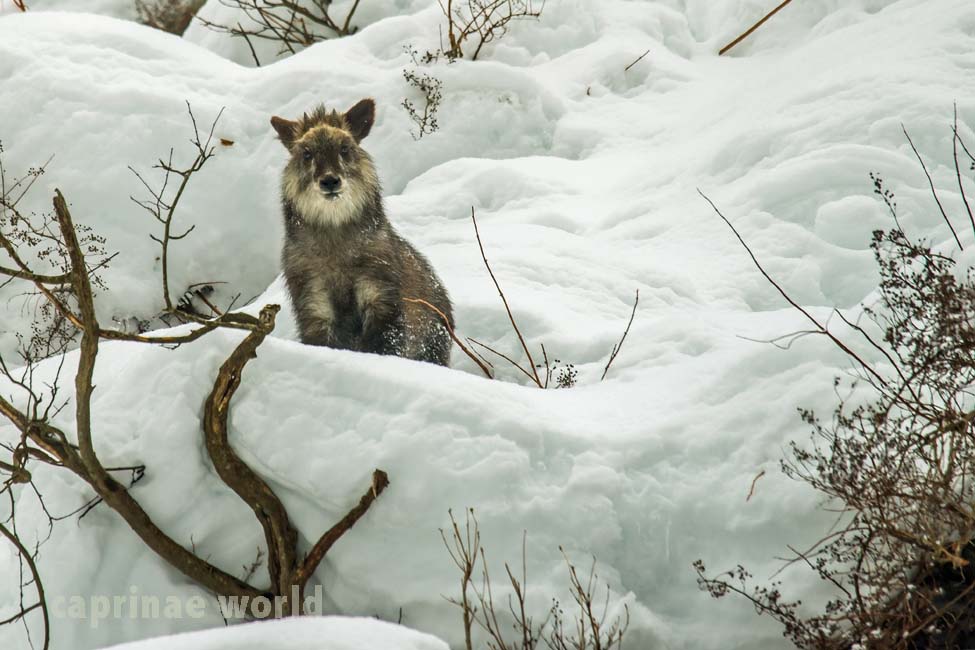 Snow can be a major factor in Japanese Serow habitat. Photo: Russel Scott

Adult mortality from native predators and feral dogs is negligible, as is potential competition with exotic deer. (3)

The Japanes Serow is basically a generalist herbivore (1). It is a browser, feeding on a variety of deciduous and coniferous trees and shrubs and bamboo, but forbs and grasses can be seasonally important. (3) It also eats fleshy leaves, evergreen leaves, plant shoots and acorns. (1) More than 100 fodder species are known, even in winter. (9) Diet in one area was 42,5 % green broad leaves; it was 65,2 % total browse during winter. (3) Weight loss in November-March was greater for older females (about 20 %) than males (5 %) and greater in non-pregnant females (23 %) than in pregnant females (15 %). (3) 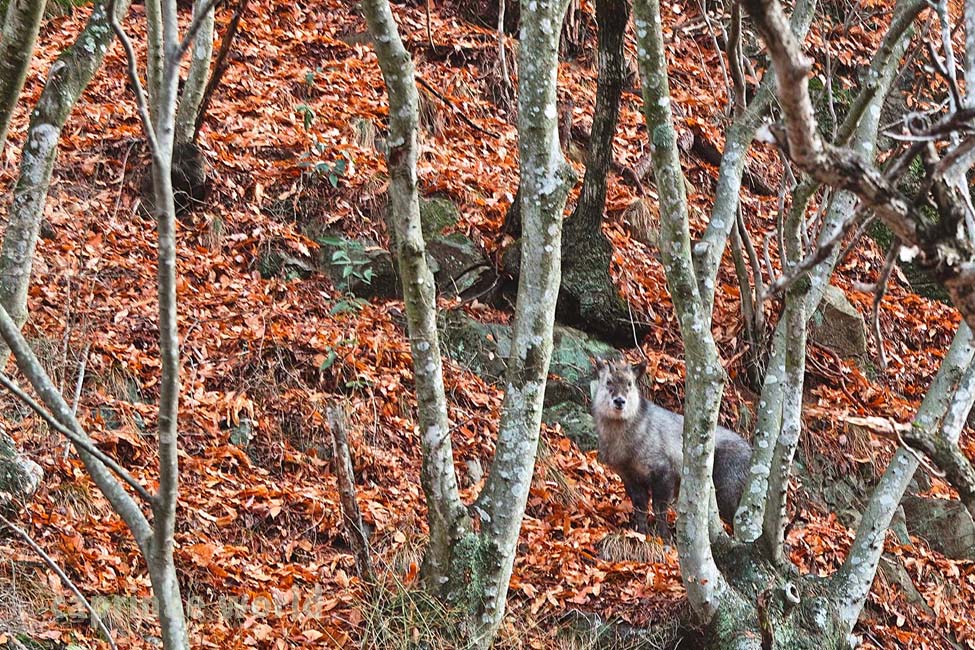 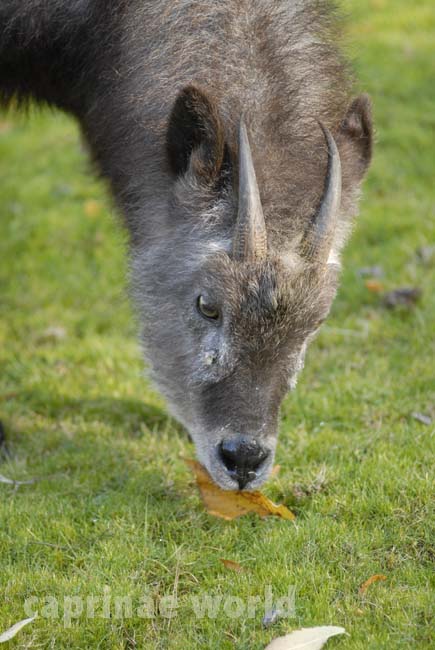 … accordingly leaves contribute significantly to the diet of Japanese Serow.

Like other ungulate species Japanese Serows show flehming (lip curling and head raising after sniffing a female’s urine). Usually serows, gorals, mountain goats and chamois do it when they smell urine on the ground. Japanese Serows are exceptional in that they also flehm while ingesting the female’s urine jet. Flehming position in Japanese Serows is also unique: They hold their heads vertically, while the other species flehm with their heads in a horizontal position. And still another exceptional mating behaviour can be observed: Japanese Serow males ram females with their heads – not aggressively though – aiming at the genital area. This behavior is thought to stimulate the female in general or to stimulate her to urinate. (9)

Primarily diurnal, but with both diurnal and nocturnal feeding periods (1, 3)

social organisation: The Japanes Serow is basically solitary (1), but it occurs in groups of up to four. 62 % of groups consisted of one adult female and her offspring (up to two years old) and 74 % of groups were of 2-4. Other groupings included mother-offspring-adult male (27 %) and adult male-adult female (18 %) (3). Newborns are followers, although hiding bahaviour has been observed. (5) 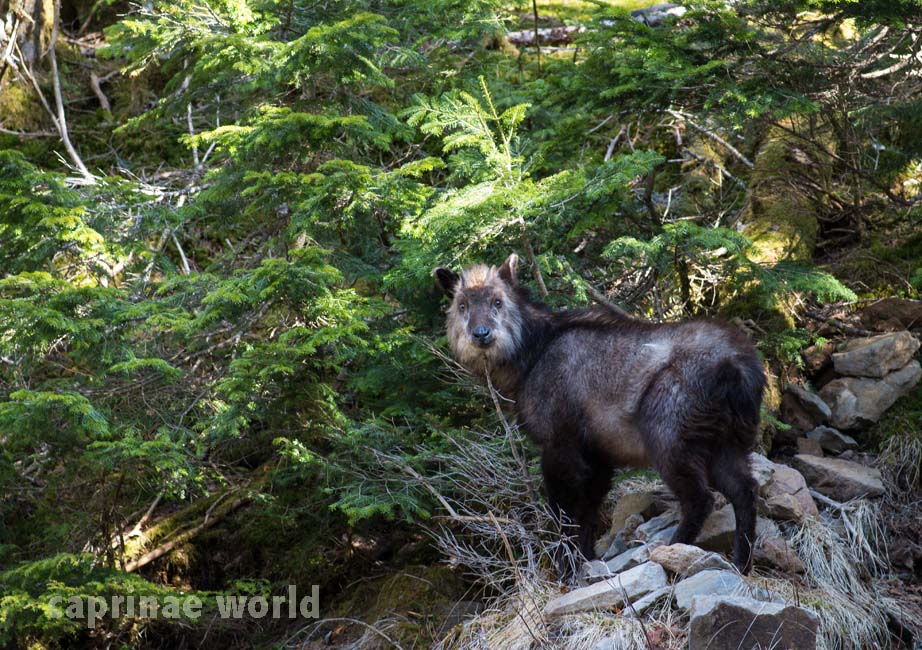 population density: 1,7-1,9 ind/km2 (71 study sites); 10,2-15,6 ind/km2 (another site); density is seldom greater than 20 ind/km2. Higher densities occur in primary forest, but after logging and reforestation, densities can greatly increase due to increase in forage availability. Serow densities decrease when trees in the afforested area mature.

general facts related to territory: Yearlings remain within their mother’s territory; offspring leave the natal territories when they near sexual maturity; males have larger territories (20,4-22,8 ha) than females (6,9-14,1 ha) (3). Basically there are two different patterns concerning territory use: Either territories border each other and overlap only slightly, or the territory of one male covers several female territories, which the male defends against other males. (9) Note, that this contradicts the statement that serows are considered monogamous. 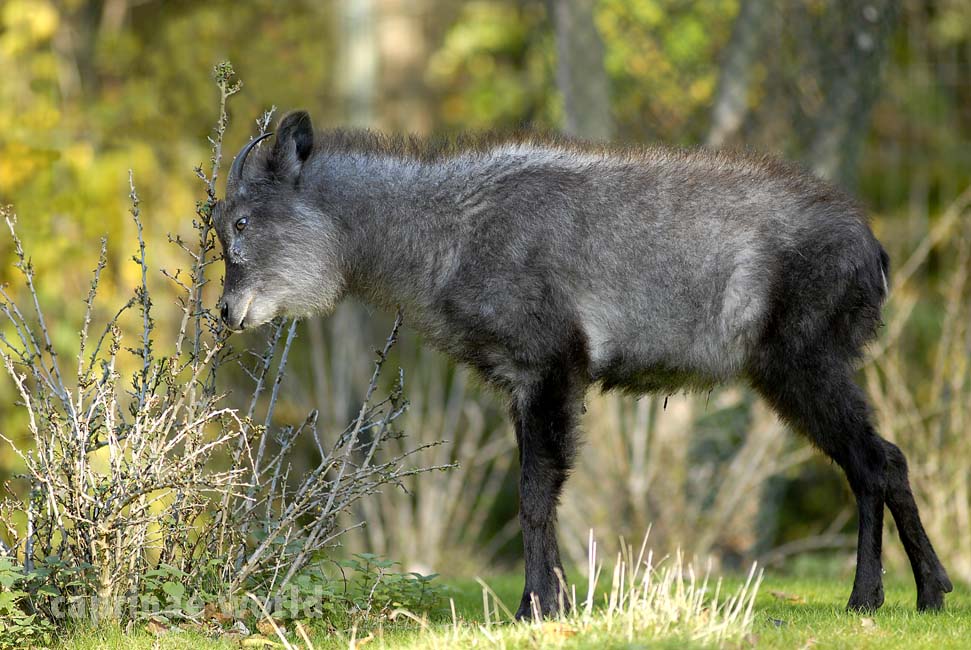 behavior related to territoriality: Both sexes scent mark their territories with the secretion of the preorbital glands. (5) Japanese Serow also possess interdigital glands. Presumably they also serve for marking the animal’s home range. During rutting season the marking is enhanced. (9) Within intersexual groups males also mark females. For that purpose the secretion of the preorbital glands is smeared upon the female’s horns, ears and the anal region. (9) Regular paths are established withhin the ranges, leading to specific defecation and resting spots. (5, 9) Other observed behaviour: Object aggression, optical marking by standing still, sometimes on stumps and large rocks to emphasize their presence, and defecating on dung piles. Adult males were aggressive to male offspring that were one year or older but tolerant of female offspring. (3) During conflicts, the opponents chase each other, inflicting serious injuries by stabbing with their harp horns. (5) Duration of territory retention: 11,7 years for males; 12,4 years for females (3)

Classified as „Least Concern“ on the IUCN Red List. (2) Total population is 100.000. Populations in general are stable or increasing. Limited hunting of Japanese Serow outside of protected areas is allowed to limit damage to tree plantations. Monitoring and management programs should be implemented. An expanded number of protected areas that provide mature native forests and movement corridors need to be established. (3) The serow population has recently decreased in Kyushu. It is considered that this decrease is probably caused by interspecific competition with sika deer. Also, the influence of deer control operations, such as disturbance of home ranges and accidental killing by hunting dogs and deer-fencing, might be having an impact. Surveys and countermeasures are needed for these problems. (2)

Capture of serow and nuisance animal control was not allowed until 1978, when controlled hunting and culling was permitted in some areas. The hunting/culling area has then been expanded. By 2005, over 20.000 serows had been removed. Culls of serow are controlled and permits required. (1)

According to various reports on mammalwatching.com the Japanese Serow is an easy to see mammal, that travelers find interesting enough to actively look for it. According to Jon Hall’s 2007-trip-report Mt. Asama is an „excellent place“ to see Japanese Serow. The animal is „virtually guaranteed. The Serows hang out about three kilometers up the mountain near the shelter. They are habituated to people and so are very approachable.“ Apparently another reliable site is the Jigokudani Wild Monkey Park near Nagano.