Being almost entirely black, the Sumatran Serow is easy to recognize. It is medium-sized compared to other Capricornis-species and the only Caprinae member that has its range solely within tropical rainforests. 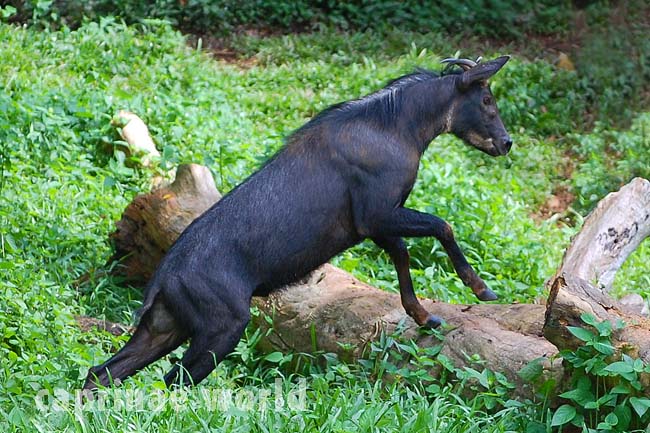 The Sumatran Serow is smaller than the Himalayan and Chinese serows and has smaller horns. (5) Chinese Serows have partially red legs, Hymalayan Serows have red and white legs.

Indonesia (Sumatra), Malaysia (on the peninsular – not Borneo) and southern Thailand.

On Sumatra the species is limited almost entirely to the volcanic mountain chain of the Barisan mountains which runs along the western spine of Sumatra from Aceh in the north to Lampung in the south.

There are three known major concentrations: the Aceh highlands in the north, the Kerinci highlands in the centre and the Barisan Seletan highlands in the south. Sumatran Serow still appeared to thrive well in 1992 in some of the better protected areas such as Gunung Leuser National Park. (2) This has changed – see „Threats“ below.

In Malaysia Sumatran Serow are found scattered throughout the peninsular. It has been recorded in 50 areas, but in each area, the number of animals is estimated to be only between 10 to 15 individuals. There are concentrations in the northern states, especially Kelantan, Perlis and Perak. The total number of serows estimated for Peninsular Malaysia is between 500 and 750 animals, though the basis for these numbers is very unclear. (2)

pelage color: dark black (3), jet-black, no white bases on the hairs, except on the mane and along the midback on either side of the dorsal stripe. (4) There is a patch of lighter hair behind the shoulder pit. (1)

On the Malay peninsula, south of the Isthmus of Kra, individuals may show variable coat coloration from entirely blackish to brownish-rufous tones. (1) However a photo in this collection of a Sumatran Serow from Melaka Zoo shows an animal almost entirely grizzled black-and-white (see below). Sex and age of this specimen are not known. 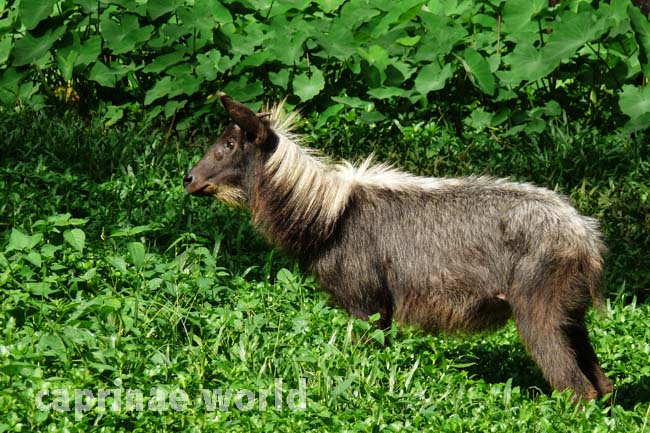 Populations from Sumatra appear to have almost uniformly blackish bodies. (1) 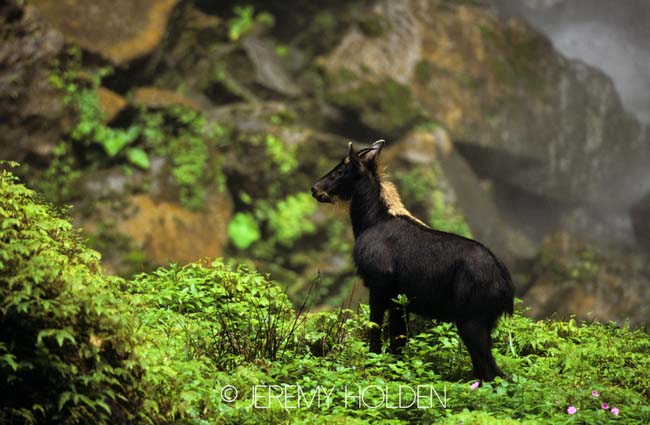 mane: coarse and stiff, mostly sparse but distinguishable, being longest in the middle part of the mane above the hocks. (1) Descriptions of the mane color are very contradictory: hoary gray to blackish from the crown to the shoulders (1); black to whitish or reddish with creamy white tips (3); varies from mostly white, or golden buffy white, to black, with only a few white hairs. (4)

legs: long, black, but with distinct (varying) reddish tones toward the hoofs; sometimes with white hairs (4); with weak brownish demarcations on the fetlocks (1); the insides of the hind legs appear of lighter color (1) 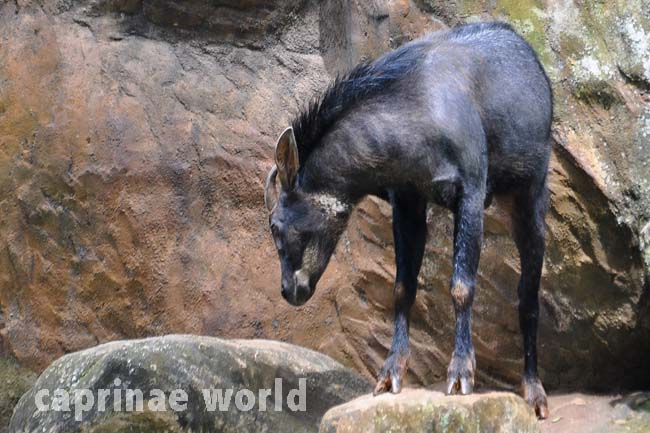 neck and head: The neck is short and broad. (1) The forehead is more swollen and convex than in Indian or Chinese serows. (4) The nose is not white, reddish above the lips, from the nostrils to the jaw angles. The face is slightly redder; lips are creamy white. The white jaw streaks quickly becoming red and petering out backward. (4) 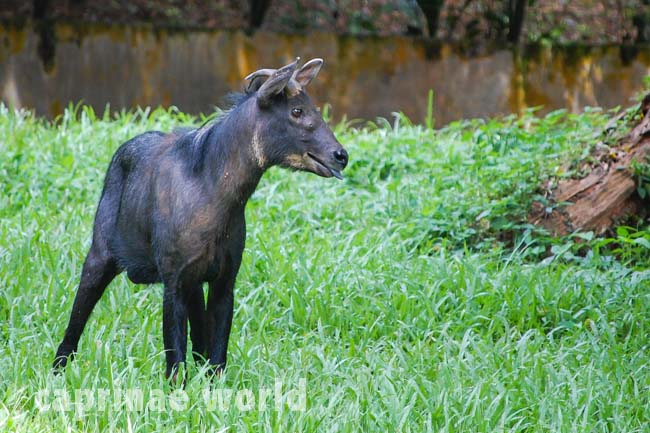 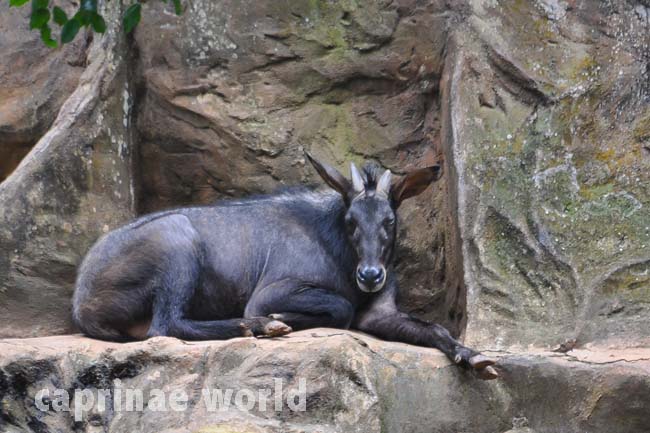 The long ears of Sumatran Serows are quite striking. Photo taken at Zoo Melaka, Malaysia by Lubomir Klatil

Sumatran Serows inhabit mountain slopes between 200 and 3.000 m (van der Zon, 1979) (2), in steep, rugged terrain (3) covered by both primary and secondary forests. It may occupy seasonal ranges and uses well marked trails that often run along ridges of steep hills. They shelter under overhanging cliffs and rocks. (2) In Thailand, they are found in precipitous limestone mountains and cliffs where trees and dense undergrowth remain, in locations inaccessible to humans. (3) They are known to swim between small islands in Malaysia. (5)

The Sumatran Serow is usually active in the early morning and late evening. (2, 3)

The Sumatran Serow is listed as „vulnerable“ on the IUCN Red List.

Within Indonesia, habitat destruction threatens the long-term survival of serow. The principal causes of the destruction are slash-and-burn agriculture practiced by highlanders and shifting cultivators, and the indiscriminate extraction of timber for export to the West.

Poaching is not uncommon, and serows are caught in snares set for other game species, as well as shot, for local consumption of the meat, and for use of body parts in traditional medicines. Killing occurs inside and outside of protected areas.

In protected areas in Sumatra, such as the Gunung Leuser National Park, Aceh, hunting continues to increase as illegal logging roads have opened up parts of the park, allowing access to previously inaccessible areas. Locals claim that populations of this species are in decline.

Trade of parts, especially the horns, is carried out openly in some places, such as in the town of Pancur Batu, North Sumatra. No enforcement action against individuals trading in Serow parts has taken place in these locations.

Threats in Malaysia come mainly from disturbance and habitat destruction caused by mining activities in the limestone and quartz ridge quarries within their habitat, and by deforestation of the hill dipterocarp forests for logging and agriculture.

Malaysian Serows also suffer from substantial poaching for its meat and body parts that are used for medicinal purposes, with this species being a target, not just an opportunistic kill. Some wildlife restaurants in Malaysia offer the meat of this species.

In Malaysia, Sumatran Serow do appear to be tolerant of some human disturbance, and in some areas, occurs very near human habitation.

Recently enforcement authorities have taken action against individuals involved in illegal hunting of this species. As a result, trade in this species is not carried out openly, as it is in other Southeast Asian range states. (2)

In Indonesia (Sumatra), the Sumatran Serow has been protected by law since 1932. A total of 3,083,308 ha of serow habitat are under some form of protection in a system of protected areas that includes three national parks, three game reserves, three nature reserves and two protected forests. However, many of these areas await gazetting and staffing, and in the absence of these actions they are little more than “paper” parks. (2)

In Malaysia the Sumatran serow is totally protected under the Wildlife Act (76/72). Enforcement is carried out by the Department of Wildlife and National Park’s Enforcement Division. Serow occur in seven protected areas, but unfortunately these neither represent typical serow habitat, nor are they adequate to ensure its survival. Serow is also found in six proposed protected areas.