The Transcaspian Urial occurs east of the Caspian Sea. In Iran it is the largest wild sheep, and only slightly smaller than the Ladakh Urial.

German: Transkaspisches Kreishornschaf [2] ((editor’s note: the term „Kreishorn“ derives from cycloceros – the epithet of the Afghan Urial, meaning „circle(d) horn“ (cycl- ≈ Greek: circle and cer(at) ≈ Greek: horn, antler, peak). The term „Kreishornschaf“ has been applied to the Transcaspian type as well to show the close relationship to the Afghan Urial. As a common name „Kreishornschaf“ should be generally abandoned, because it doesn’t help at all to describe a wild sheep, since all sheep basically have „circled horns“. To bring the term into line with international nomenclature it seems advisable to stick to „Transkaspischer Urial“))

The name orientalis is based on a hybrid population in North-central Iran and therefore is not usable. [16]

One basic information that can be extracted from this table: The sculls of Transcaspian Urials are on average 2 cm longer and 1 cm broader than sculls of Bukhara Urials. For Groves and Grubb (2011) this is one of the main arguments to separate the two phenotypes as distinct species. (⚡: survey sample size is very small!) 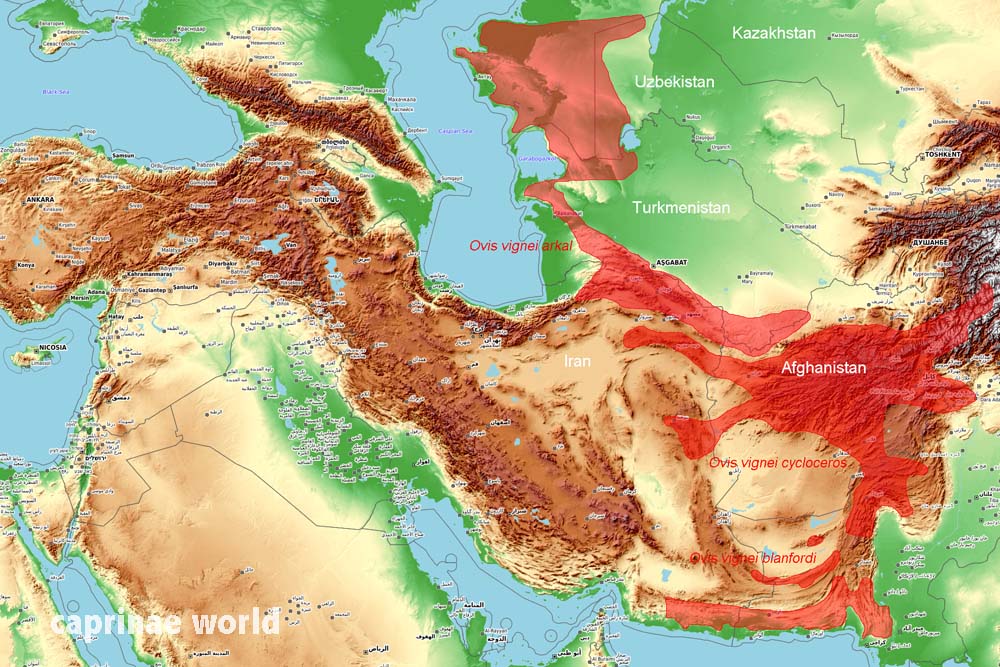 – Ustyurt Plateau (transboundary desert shared by Turkmenistan, Uzbekistan and Kazakhstan). There it occurs in the ravines surrounding the plateau [7] as well as the coastal cliffs and low mountains along the eastern shore of the Caspian Sea [2] and Kaplankyr [7] 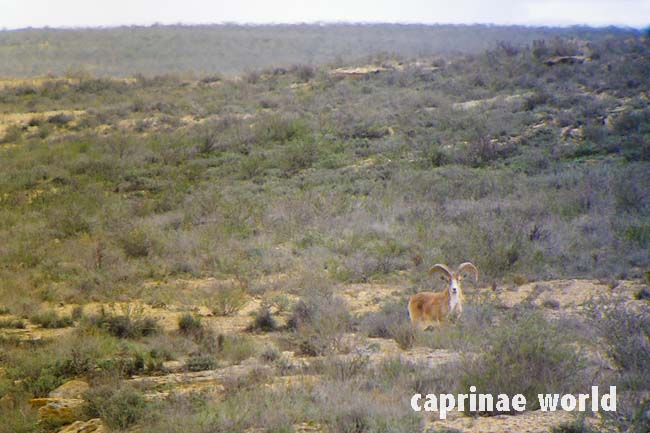 – Mangyshlak Peninsula (mainly within Uzbekistan, including the southwesternmost fringe of Kazakhstan): Here Urial occur in the Karagiye Depression and the table mountains of north Aktau in the central and northern parts of the peninsula. [2]

((editor’s note: The Ustyurt Plateau can be seen as a part of the Mangyshlak Peninsula))

Valdez (2008) mentions more locations, which were not assignable: the moderately high mountains of Karatau; to the south to Kara-Bogaz-gol; similar habitat in Karagie, Kaunda, Kazakhla, Kulandaga, Kazakhly-Sora and other areas [7]

Hybrids and the purest: In the Alborz Mountains (Iran, Semnan Provinz) a hybridisation zone with „classic“ Transcaspian Urial, Armenian Mouflon and individuals with hybrid characteristics exist, even within the same herd. [2] The purest form of the Transcaspian Urial in Iran is found in Golestan, Gorkhod, Serany and Tandoreh Protected Areas [7]

Transcaspian Urial and its neighbours to the east: Weinberg (2010) states that Bukhara Urial (O. v. bocharensis) do not occur west of the Kugitang Mountains. Therefore the ranges of these two subspecies do not touch. [2]

In the southeasterly extension of the Transcaspian Urial’s range, where the borders of Iran, Turkmenistan and Afghanistan come together, the Transcaspian Urial range probably touched the range of the Afghan Urial (O. c. cycloceros) in historic times. Today the plains in the east-central part of Razavi Khorasan Province possibly act as a break. [2] 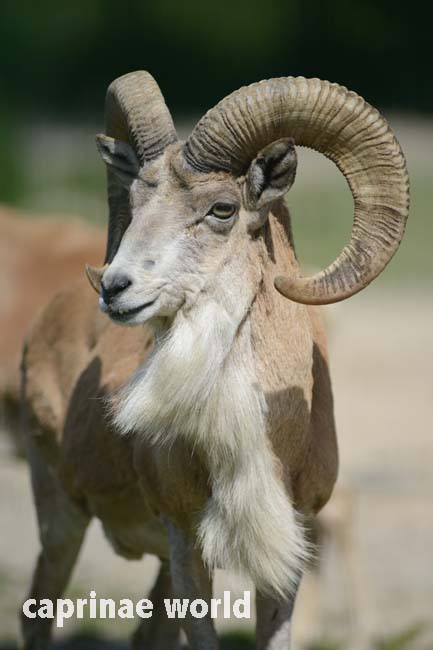 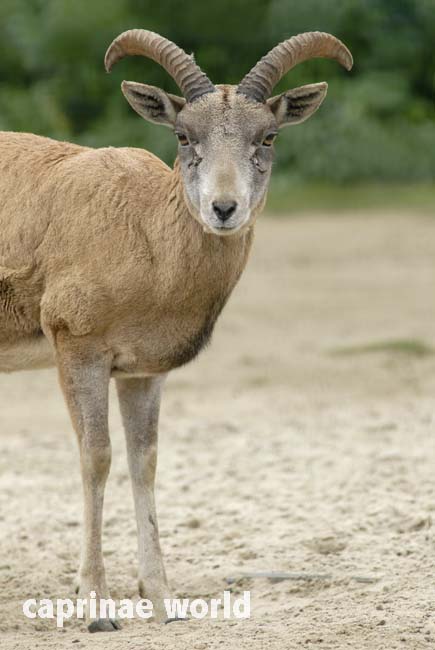 Because of the large distribution area and plasticity of urials in the area it is difficult to describe „THE typical“ Transcaspian Urial. In Iran it is the largest wild sheep, only slightly smaller in body size than the Ladakh Urial. [2] Few measurements are available. 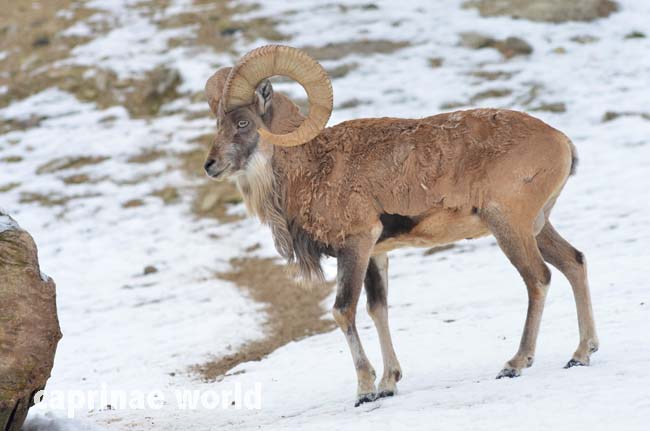 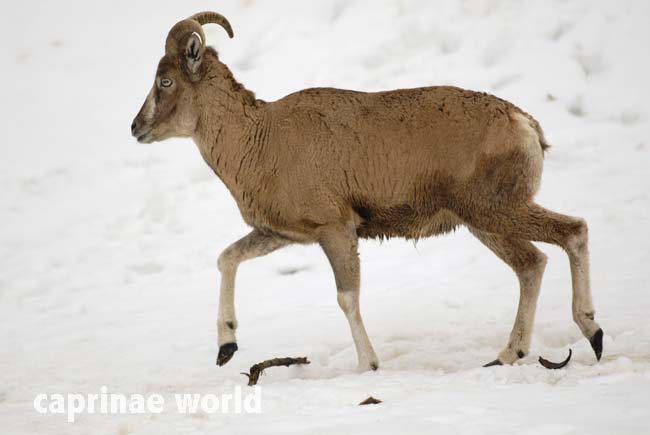 lateral stripe: dark brown; separates the upper parts from the white underparts; not very visible in the summer coat [2]; compare with photo of male above: lateral stripe is black and incomplete

limbs: area from „knee“ to pastern is white in adults [2]

face: sides are brown mixed with white; hairs around muzzle are pure white [2]

In Transcaspian Urial both bib and neck ruff are conspicuously white [16], especially in winter coat [2]. In contrast the Afghan Urial (O. v. cycloceros) possesses a white bib (throat ruff) and a black neck ruff [16]. However in younger Transcaspian Urial rams the neck ruff can be also dark. And in summer, bib and ruff are much less conspicuous. Ewes have neither ruff nor bib [2].

Horns grow in a tight circle or form an open spiral. [13] They have distinct corrugations. [2] The frontal surface is flat [13], with sharply angled anterior edges. [2] Cross-section is triangular. [13] 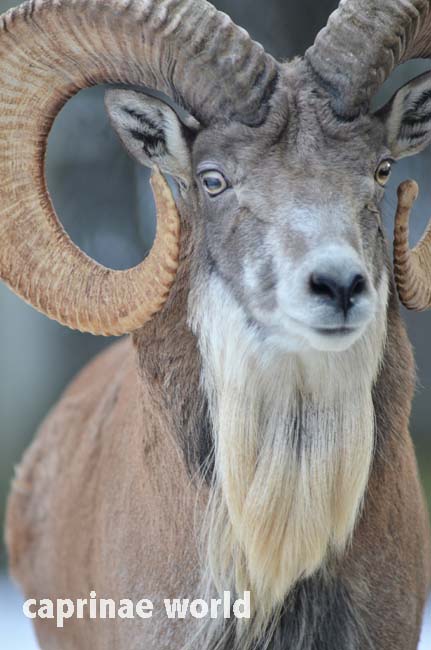 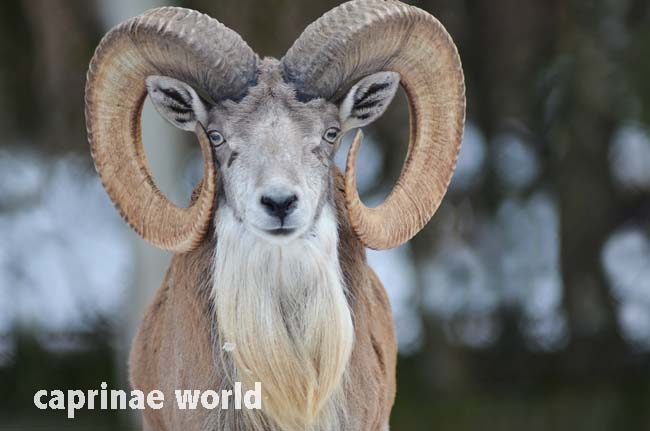 horns of ewes: have usually short horns; but Nasonov (1923, pp. 46, 51) mentions that ewes of dolgopolovi are hornless, while those of arkal are horned. [2] 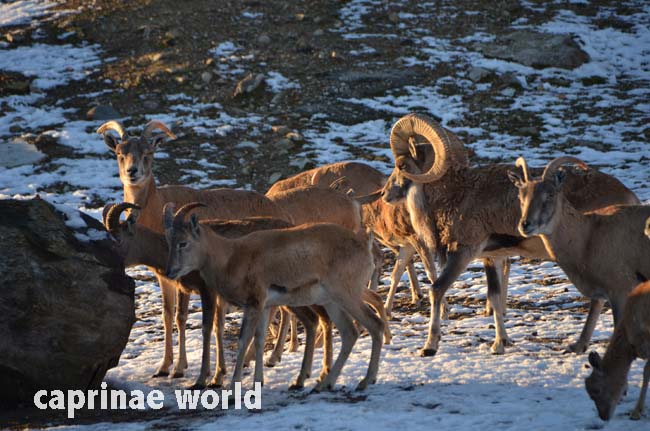 record horn lengths: The largest head comes from Iran (although there are also quite a few listings from Kazakhstan and Turkmenistan). A specimen from Bojnourd in North Khorasan Province, Iran, from 1976 had 118,1 cm (longest horn) with a 26,4 cm basal girth. Most of the top-scoring trophies originate from this area. [2]

In Iran this urial occurs on rolling hills and on gentle mountain slopes [7]. The Fetisovo Plateau in Kazakhstan is mainly characterized by an Artemisia sp. -steppe but also by vast depressions such as the Vpadina Kaundy. [5] 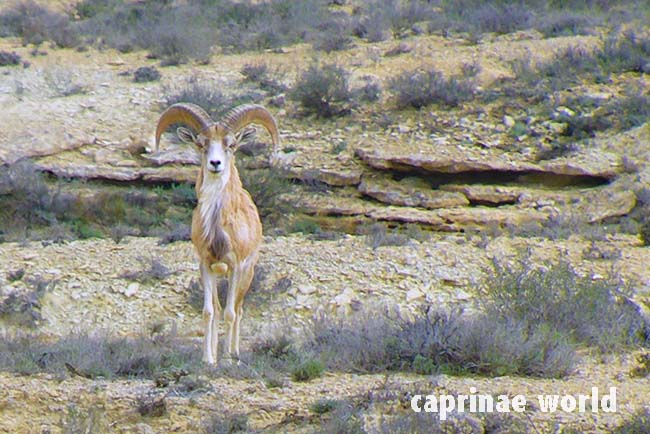 The total number estimated in ex-Soviet republics at the beginning of the 1990s was ca. 6.000 animals. Numbers had declined sharply before the mid-1960s.

During a survey in Mangghystau Province, West Kazakhstan in 2009 only 1 animal was observed. [5]

along the shores of Kara-Bogaz Gol: 500

Following protection resulting from its listing in the USSR Red Data Book, numbers of this subspecies began to increase in the latter half of the 1980s with some populations reestablishing themselves naturally. However, since the early 1990s the populations appear to have once more declined. [7]

with ca. 40 near the border with Turkmenistan (B. Dyakin pers. comm. to E. Mukhina, 1995) [7]; in Northwestern Uzbekistan ((editior’s note: which corresponds with the total range in this country)) the urial population is believed to be small and numbers may range from 100 to 300 individuals. [2]

Poaching remains a major threat and is the cause of the latest declines in the ex-Soviet republics. It is carried out by locals, especially around the limited waterholes used by the Urial, using both firearms and snares (Fedosenko, 1986; Gorbunov, 1986). In Iran the threats include habitat destruction, poaching and competition from livestock. [7]

The Transcaspian Urial is found in the following protected areas, wildlife refuges and national parks:

Trophy hunting: In Iran, Caprinae – including Transcaspian Urial – are the only game mammals that can be hunted under licences issued by the Department of the Environment.

The hunting season for Caprinae lasts four months beginning each year in September, but each licence is valid only for five days from its date of issue. Hunters with non-automatic and semi-automatic weapons can obtain a licence and are permitted to shoot a wild sheep (or a wild goat). Each hunter can obtain up to four licences per hunting season, and may shoot three males and one female.

Unfortunately the exact numbers of Caprinae shot each year by hunters are not available. According to recent data (2008), between 2.200 and 3.200 licences were issued each hunting season, and a rough estimate of the number Caprinae legally shot each year would be between 2.000 to 3.000 animals. However, more than twice this number are estimated to be killed by poachers annually. Hunting is permitted in protected areas but requires a special licence. Because Caprinae populations are not harvestable in most areas, licences are almost never issued for protected areas. [7] 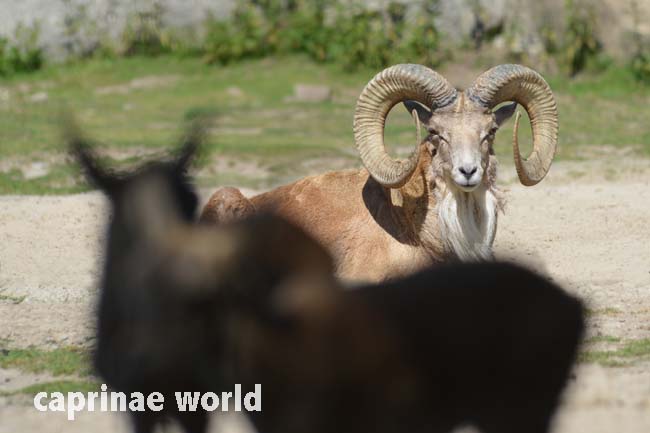 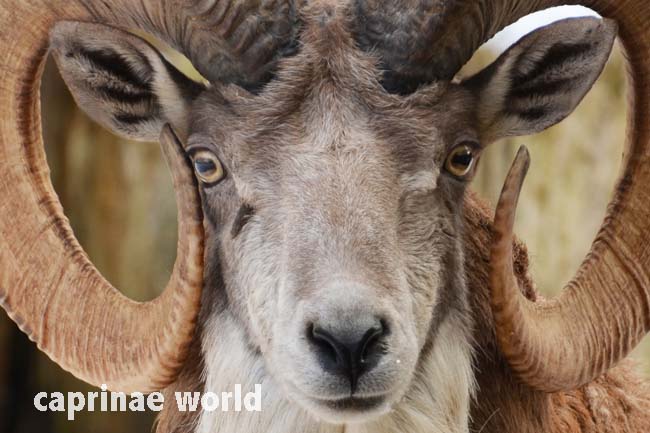 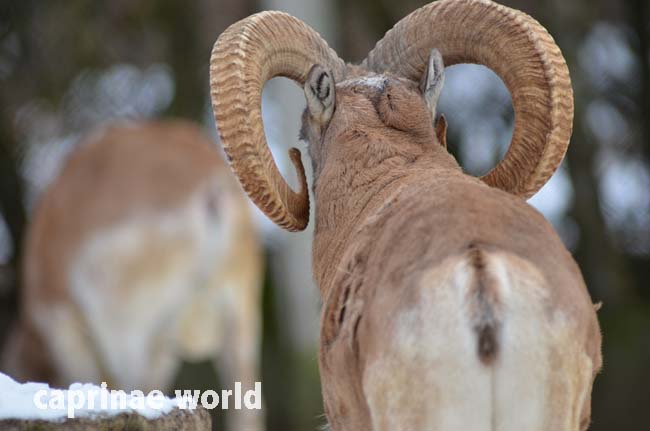 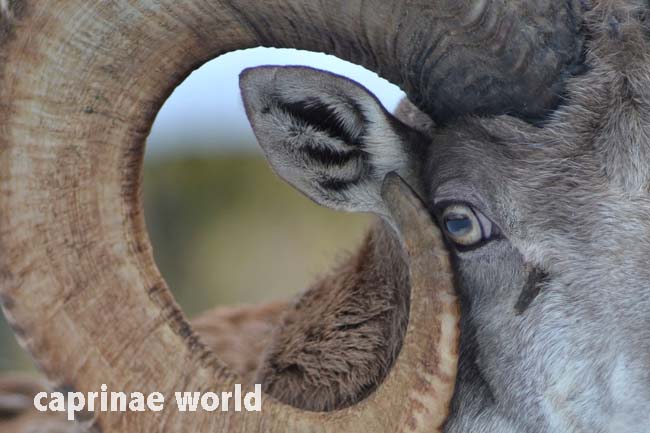 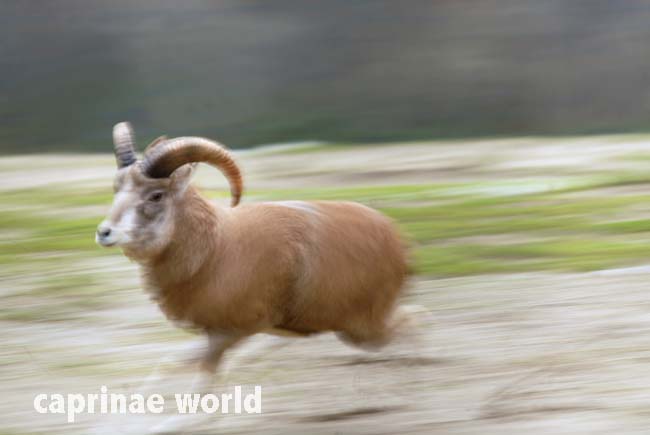 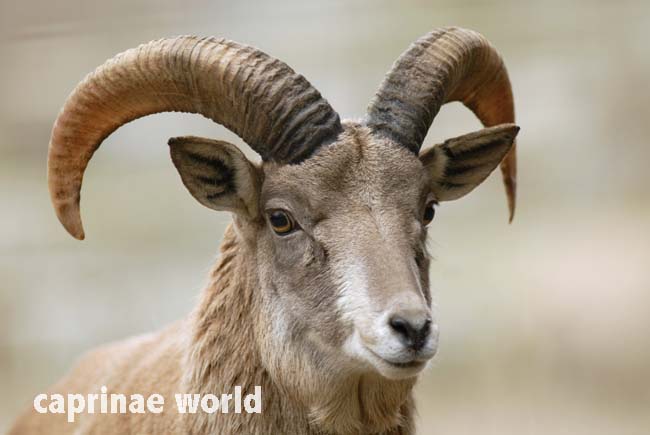 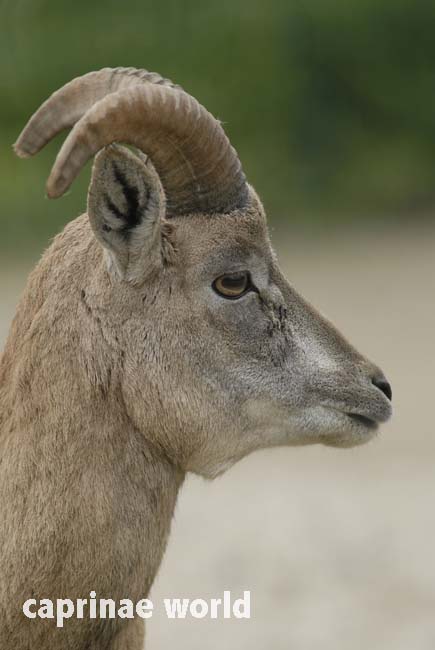 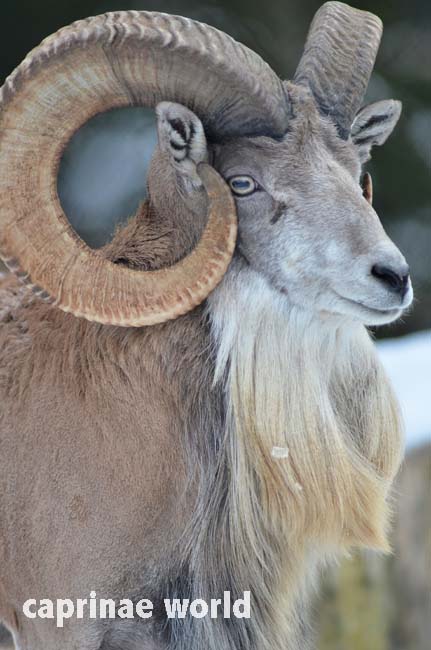 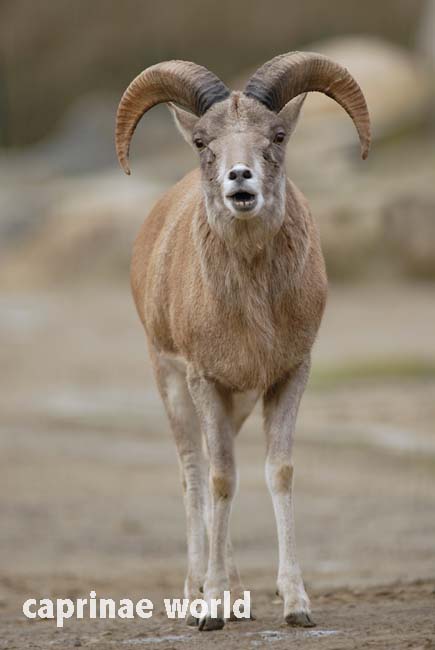