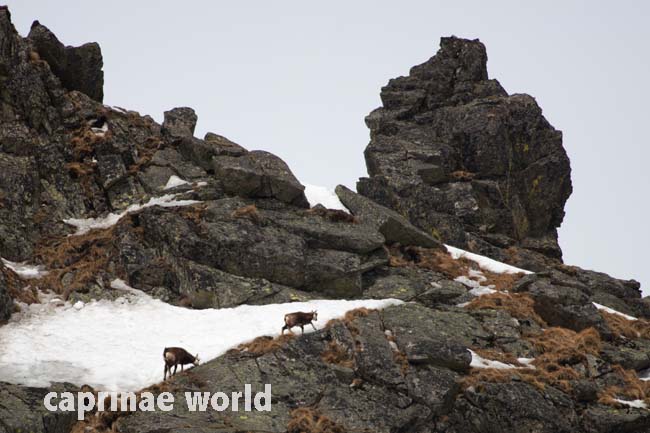 The Tatra Chamois is treated as a subspecies of the Alpine Chamois. It has a very small and isolated distribution range in the Tatras Mountains on the border of Slovakia and Poland. 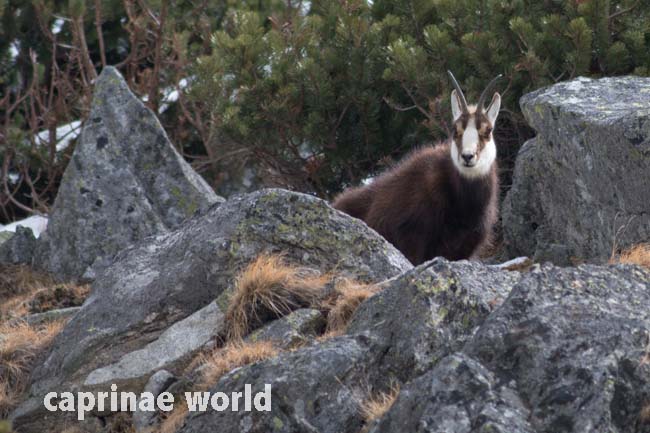 Taxononmy is still not clear to date: Several authors consider the Tatra Chamois as a subspecies of the Alpine Chamois (Rupicapra rupricapra). (5) Couturier (1938) classified Tatra Chamois as belonging to the subspecies of the Carpathian Chamois (R. r. carpatica). Blahout (1972) separated the two phenotypes based on the completely different geographic location; he also used some differing cranial (scull) features to support the separation. Some authors consider these quantitative and qualitative characteristics as insufficient to justify subspecific status. (1)

In general Croves and Grubb (2011) state that they cannot comment on the distinctiveness of the Tatra Chamois, „which may or may not be different from the Alpine Chamois (the available measurements, however, are very different from those of the Carpathian Chamois).“

But again the findings of Hrabe and Koubek (1985) are contradicting: stating that cranial measurements of Tatra Chamois are larger than those of the Alpine Chamois (R. r. rupicapra). (1)

The invariable use of alpine habitat above timberline is a distinctive behavioral feature of this subspecies. Tatra Chamois have never been observed in forest habitats. (5, 1) 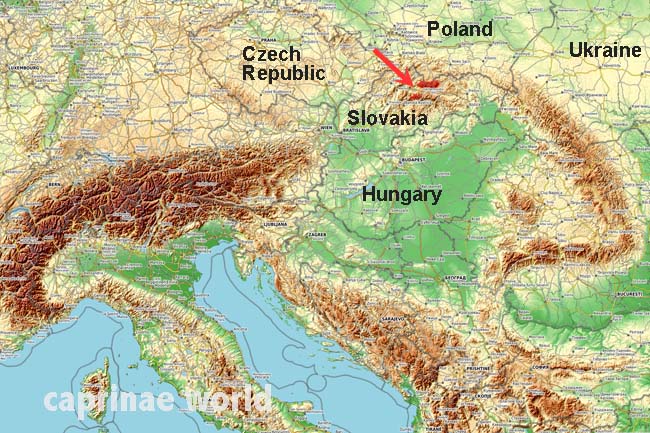 There are only two small distribution ranges for the Tatra Chamois – situated between the Alps and the Carpathians. Map Source: OpenTopoMap 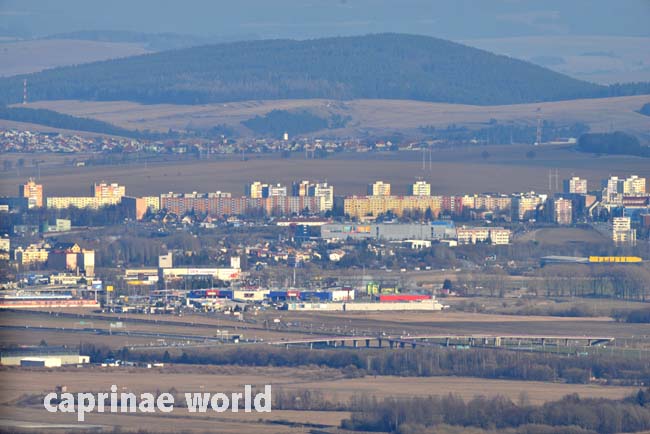 The town of Poprad in the valley that separates the High and the Low Tatras. Photo: Bürglin 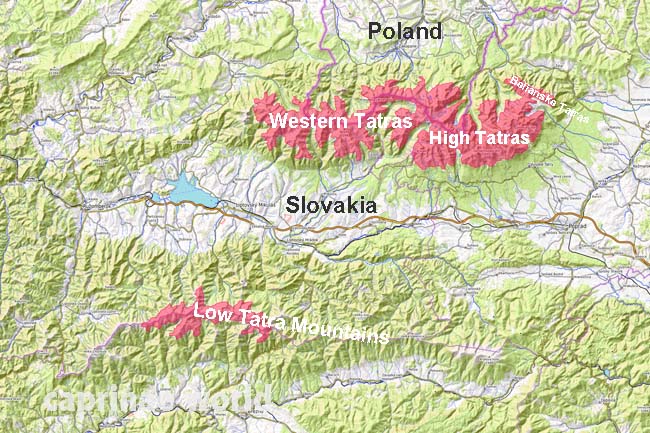 The second population occurs in Slovakia about 50 kilometers south from the High Tatras in the Low Tatra Mountains (Nízke Tatry) in and around Lomnistá Valley head and the Vajskovská Valley head. 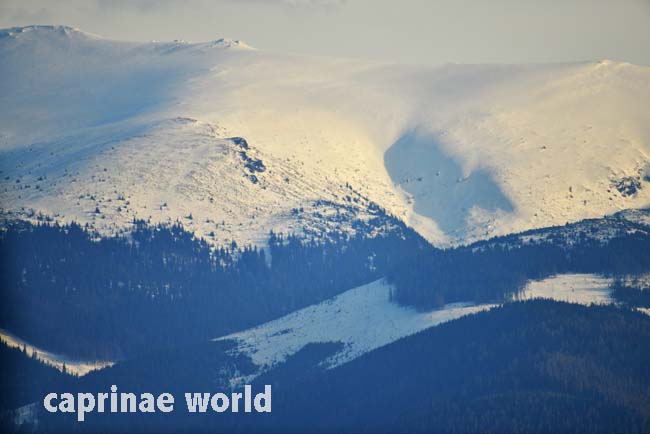 Low Tatras with their more hilly character: Photo taken with a 800 mm lens from the High Tatras. Photo: Bürglin

The two distribution areas – High Tatras and Low Tatras – are separated by a populated valley both deep and wide. (1) 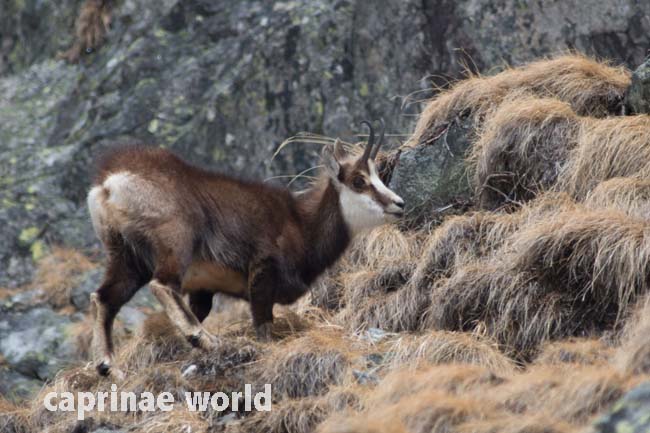 dorsal stripe: extending from the withers to the root of the tail (1, 5), also visible in the blackish winter coat. (1)

Both sexes have typical hooked chamois horns (1), with tips curving sharply backward and downward. (5) Average horn length is 23 cm with maximum lengths up to 26 cm. Base circumferences average 8 cm with a maximum 10 cm. (1) Horns of males are larger in girth than those of females. Horns of females can be longer, but are slimmer. (5) 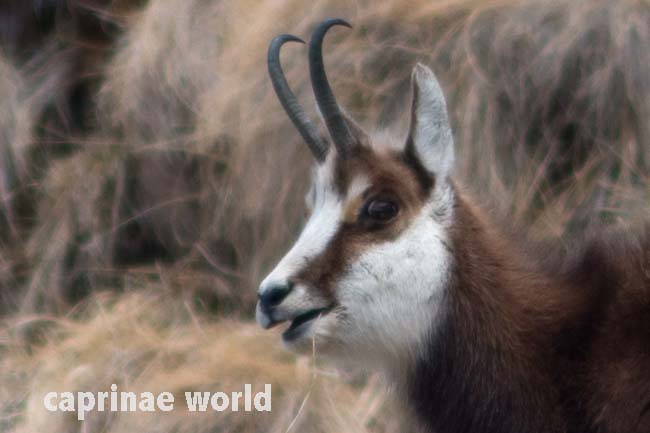 The horns in females are thinner. Photo: Bürglin/High Tatras

Data is contradicting: Castelló (2016) writes „there is little“ (5). Croves and Grubb (2011) quote Hrabě and Koubek (1984) who found that sexual dimorphism was „considerable“. (4) In the field look for the horn hook, that can be considerably more pronounced in males than in females. Horns of females generally also have a smaller circumference. They appear thinner. To confirm a male also look for a tuft of hairs dangling between the hind legs. 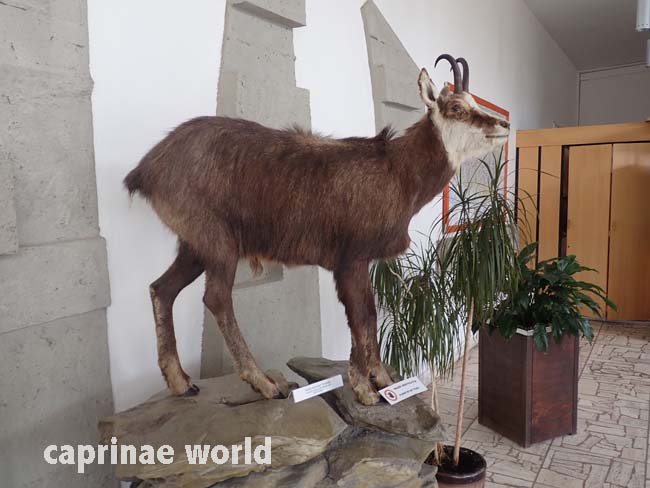 Stuffed male specimen in the Natural History Museum in Tatranská Lomnica. Note the stronger hooked horns and the tuft of penis hair, that can help to identify males in the field. Photo: Bürglin/High Tatras

Tatra Chamois live above tree line at 1700 m (1), in open and semi-open alpine habitat, including alpine meadows, cliffs and boulder fields. Tatra Chamois have never been reported to sojourn in forest habitats. (5,1) They even avoid areas of dwarf pine, and also sheer rock faces, and sharp formations. (1) 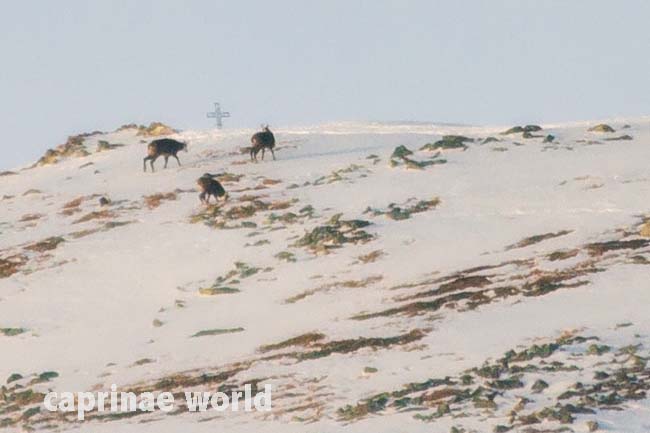 On April 3rd theses Tatra Chamois linger at this mountain peak and dig for dried gras under the snow. This is unusual for chamois. In other areas outside the Tatras chamois look for fresh green further down the slopes at this time of the year. Photo: Bürglin/High Tatras 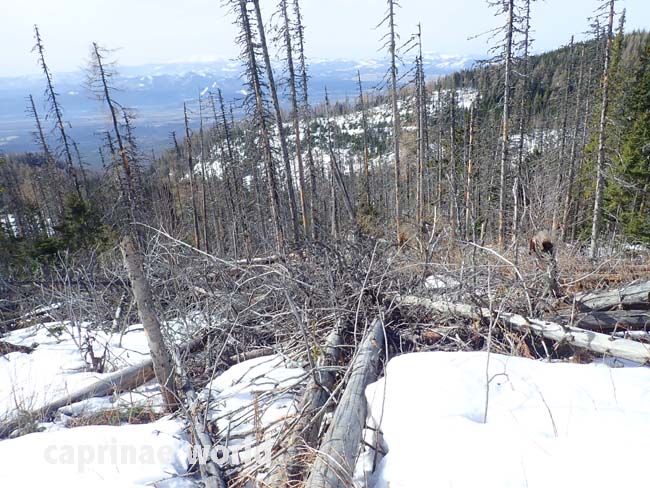 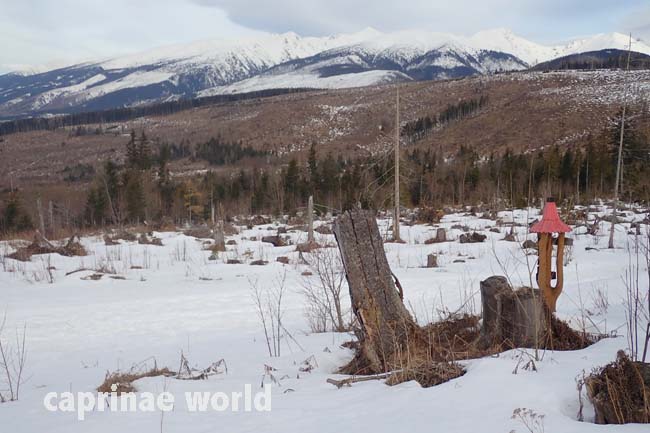 The lower slopes on the south side of the Tatras are very flat. Escaping would be difficult for chamois in this terrain. Photo: Bürglin/High Tatras 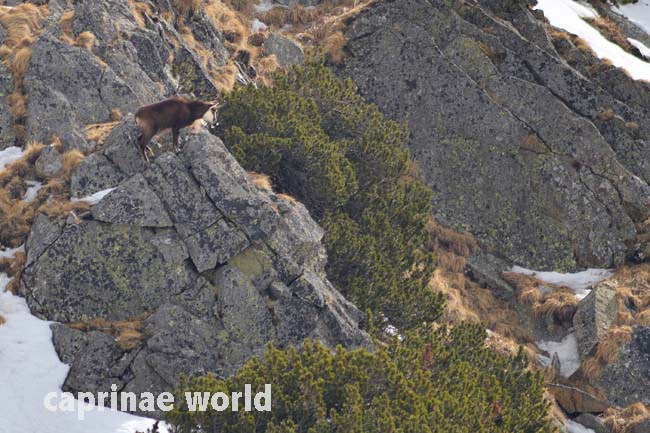 Tatra chamois are said to even avoid to enter areas with dwarf pine. Photo: Bürglin/High Tatras 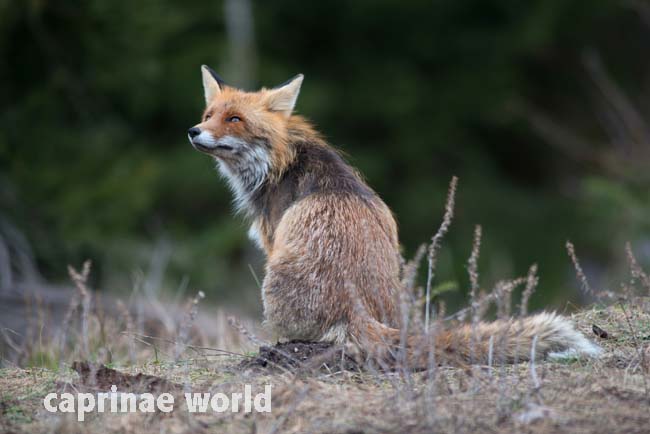 Foxes can predate on chamois. But probably they have rather newborns on their mind. Photo: Bürglin/High Tatras 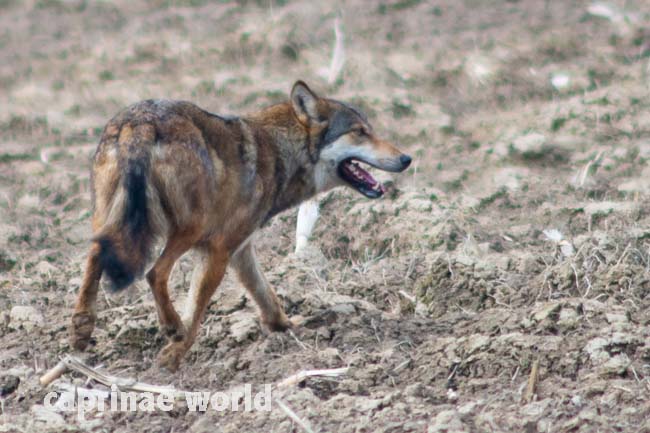 The presence of wolves may be the main reason why chamois do not enter the forests. Photo: Bürglin/High Tatras

Both a browser and a grazer: grasses, leaves, buds, shoots, fungi (5) 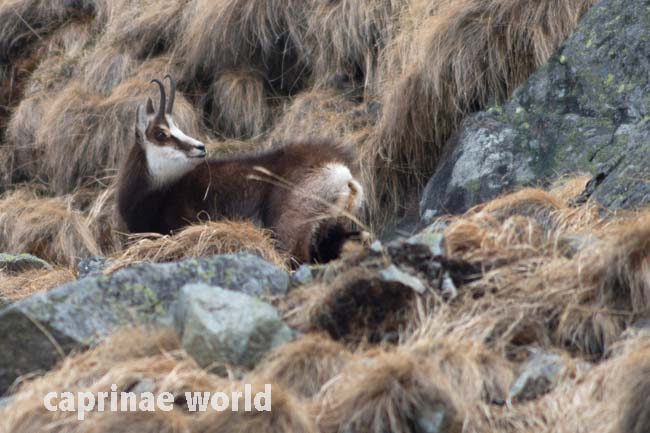 Tatra Chamois at the beginning of spring amidst bunches of dried gras. Photo: Bürglin/High Tatras

mating-season activity: no specific information available for this subspecies, but probably like other Alpine Chamois, with the rut beginning in the middle of October and ending in December. Males hardly eat during this time and live on accumulated fat reserves. During this season males join female herds and try to drive away other males. The risk of getting injured during fights is quite high and can lead to the death of one of the opponents. (5)

Number of Tatra Chamois over time

Usually 20 to 25 percent of the total number lives in the much smaller Polish area, with the rest on the Slowak side. (1)

Introduction of Tatra Chamois in the Low Tatras

Because of concerns of survivability of this subspecies in its native range, some 30 Tatra Chamois were introduced in the Low Tatras, situated south of the High Tatras, from 1969 to 1976 (1,5). The Low Tatras were selected because their geomorphologic and climatic conditions were closest to those of the High Tatras. (1) The current population living in the Low Tatras Nationalpark is about 100 (1,5). Fluctuations in the number of these animals is attributed to avalanches, predation, poaching, and an uncontrolled influx of tourists. (5) The Low Tatras National Park organizes a census every November. Further increase is not expected due to insufficient suitable habitat (rocky terrain) and predation. (1)

Introductions of Alpine Chamois in the Tatras

There are reports that a group of Alpine Chamois had been released in the 1930s by Prince Hohenlohe, a hunter and the former owner of large sections of Slovak Tatra. Between 1956 and 1960, Alpine Chamois were also introduced to the Vel’ká Tatra (1) („Vel’ká Tatra“ is most probably a misspelling; it should be Vel’ká Fatra – a mountain range that lies west of the Low Tatras.) This population increased to 52 individuals in 2005. In 1962, six more Alpine Chamois were introduced into the Slovensky raj Mountains (1) (probably east of the Low Tatras). Due to extensive damage to native vegetation, a total cull of these non-endemic animals has been proposed. There is also some possibility that these introduced Alpine Chamois hybridize with the Tatra Chamois from the Low Tatras. In any case, the purity of the Tatra Chamois should be maintained and any hybridization prevented. (1)

Major threats include poaching and disturbance and habitat loss caused by tourists. An estimated three million people visited Tatra National Park in 1990. In Slovakia, interbreeding with the above mentioned Alpine chamois threaten Tatra Chamois in the Low Tatras. Both populations – in the High Tatras and Low Tatras – are relatively small and their effective population sizes may make the maintenance of genetic diversity and adaptability limited over the long-term. (2) 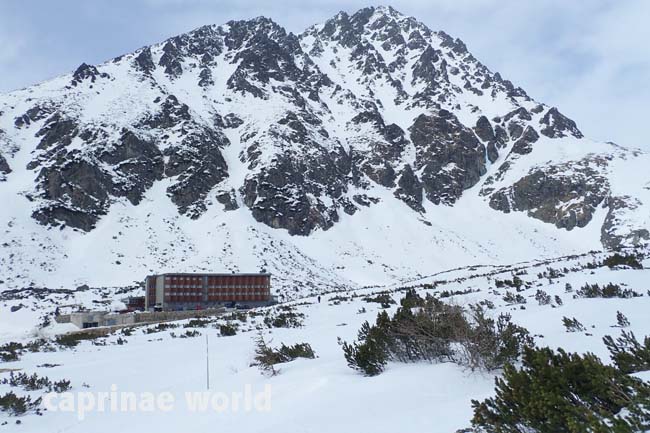 To protect the High Tatras subspecies, Jurdíková (2000) recommends reducing illegal hunting by closing and guarding parts of the Western Tatras. Alpine Chamois introduced into the Lower Tatras should be removed as they pose a threat to the wild population of the Tatra Chamois (Shackleton 1997). (2,1) The populations in Slovak territory receive some supplementary forage and minerals like salt. (1) 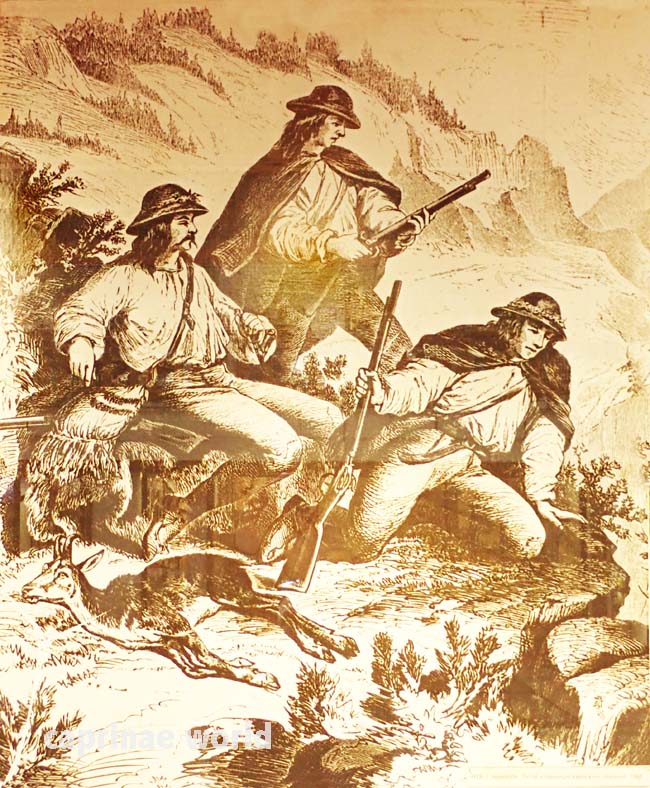 Hunting Tatra Chamois has been strictly prohibited by law in Poland since 1868 and also in Slovakia. But the introduced Alpine Chamois is presently subject to the Slovak hunting law and usually five to seven hunting permits are allocated per year. (1) Nevertheless some tour operators sell these as Tatra Chamois to their clients. 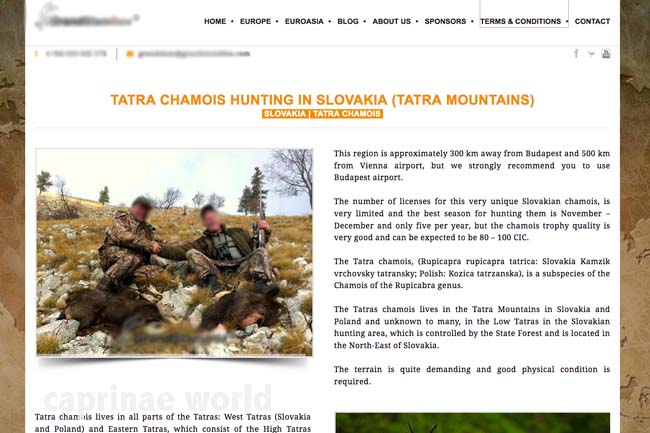 Hunting Tatra Chamois is prohibited by law in Poland and Slovakia. Only the introduced Alpine Chamois can be hunted in the Low Tatras. Nevertheless some tour operators sell these as Tatra Chamois to their clients. Screenshot – altered 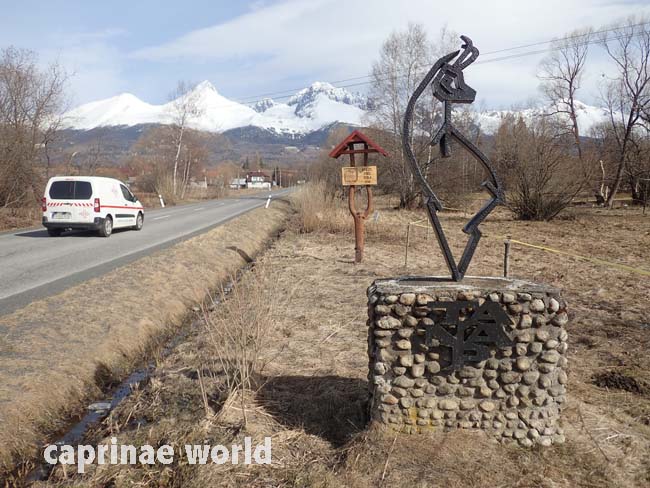 The Tatra Chamois is the heraldic animal of the Tatra Nationalpark. Photo: Bürglin 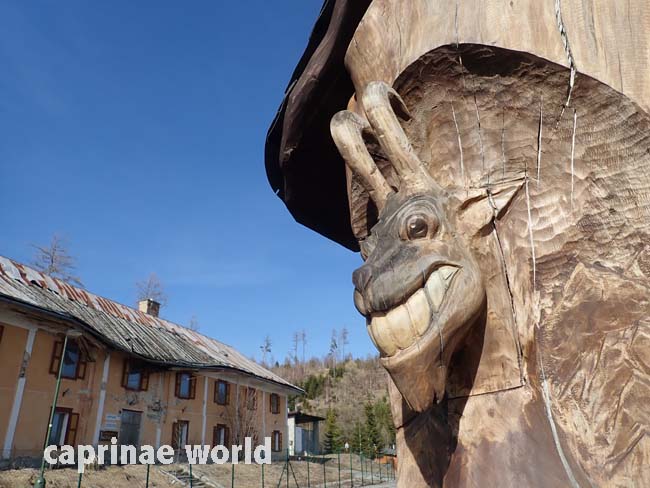 The Tatra Chamois is the heraldic animal of the Slowakian Tatra Nationalpark. It is highly iconic, thematised on information boards. It is the first stuffed animal, that visitors get to see, when they enter the Natural History Museum in Tatranská Lomnica. The Tatra Chamois is also well presented on product labels and in advertisments in general. On my trip to Tatra Nationalpark in April 2018 it was the most easily observed mammal species. Having noted all this, it is also a fact that Tatra Chamois are hardly mentioned in wildlife watching trip reports, suggesting that they are so far not the reason to visit the area.